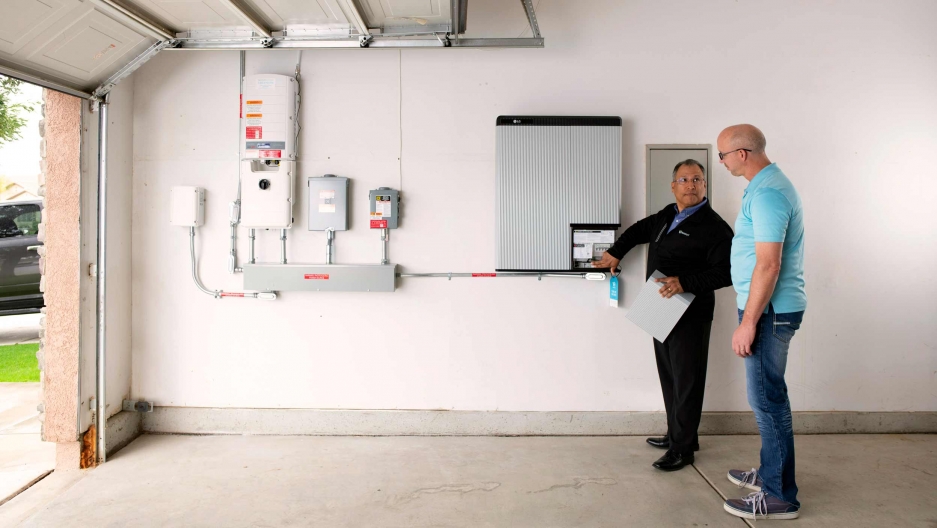 Homeowners can connect solar panels to batteries in their garage, this one from the Bay Area company Sunrun, to help power much of their homes during times of peak electricity demand.

In Kenya, the electric grid is notoriously unreliable. It goes out a lot.

“At least once a day,” says Colin le Duc, a partner at Generation Investment Management, a London-based firm co-founded by former Vice President Al Gore that finances companies pushing towards sustainable solutions. “If you're watching a Champions League soccer game and the grid goes down in the middle of the game, that's not a good outcome.”

Le Duc's firm is trying to avoid that outcome by investing in the Kenyan company M-Kopa, which installs solar panels coupled with lithium-ion batteries. And they’re not just targeting customers who lose power during soccer matches.

“There are obviously areas of Kenya where there is no grid at all. And you have the opportunity to leapfrog directly to a distributed model of clean energy and thereby basically negate the need to build centralized grid systems,” says Le Duc.

Related: Can the US protect its power grid from hackers?

To combat climate change, solutions like this help countries to transition away from dirty fossil fuels and replace them with renewables, like solar and wind. Both have made tremendous leaps in recent years — think of all the solar panels you now see on people’s roofs versus decades ago. But there remains a major hang-up with solar panels: They only work when then the sun is shining.

But the field of solar-powered battery storage is booming.

Back in Kenya, there remains another big problem: affordability. To overcome this, Le Duc says M-Kopa leases its solar systems for the same cost as a daily supply of kerosene or wood: “So 50 cents a day for the solar system. And what typically happens, is [customers] will pay that for about a year, and by that stage they would have paid off the solar system.”

Customers without a bank account can pay through their phones. The batteries in Kenya supply enough energy to charge a cellphone and run a radio for a few hours.

“These are not massive systems, that’s why they’re so cheap," De Luc says. 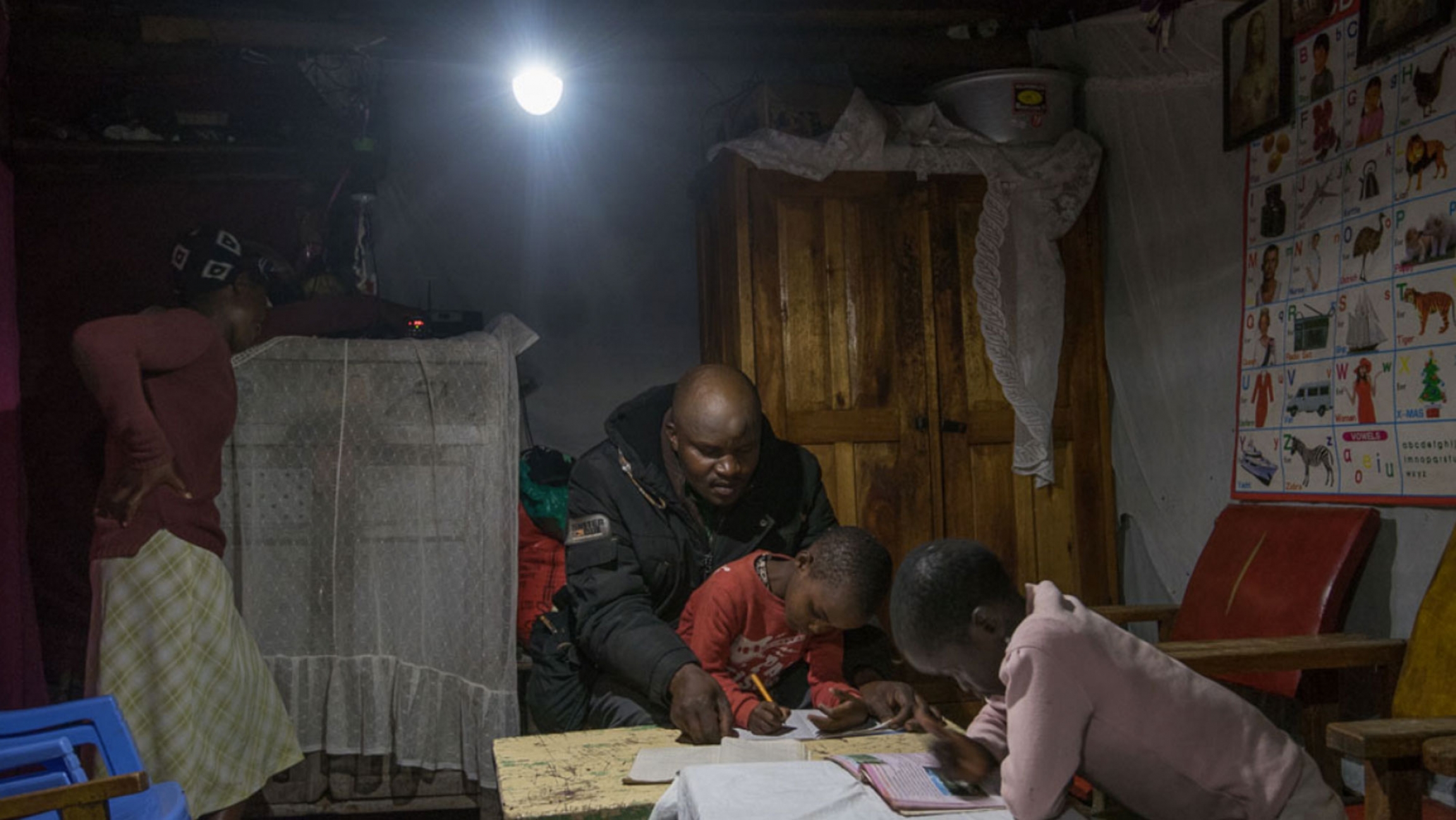 M-Kopa has roughly 1 million customers in Kenya, Tanzania and Uganda. After leasing for about a year, customers can own the solar storage systems, which supply a modest amount of power to houses.

M-Kopa is exploding. It has about a million customers in Kenya, Tanzania and Uganda.

“If you think about solar penetration in the US, the US is far behind Kenya relatively, just because of the strength of the existing grid in the US,” Le Duc says.

In the US, we don’t really need big batteries in our garages because we have a reliable electricity grid. That said, more and more US homeowners are giving it a go.

For some Californians, it’s for similar reasons as for Kenyans. The California utility Pacific Gas & Electric says it may temporarily shut off some high-voltage lines as part of a new wildfire safety protocol, potentially causing rolling blackouts for up to 5 million California customers.

“We just don’t want to deal with that,” says Susi Polos, who lives near Berkeley.

Related: Solar energy gets an endurance boost from salt

During the day, her new rooftop solar panels produce energy. She can then use that energy, stored in batteries in her garage, to help power much of her home during times of peak electricity demand to lower her costs, or for eight to 12 hours during a power outage. Polos was also motivated to install solar-powered batteries for environmental reasons: “The current world, climate change.”

Audrey Lee, Sunrun’s vice president for energy services, envisions home-storage solar batteries as another iteration of the sharing economy, similar to the Airbnb model. But this time, instead of sharing our homes, we’ll be sharing electrons.

Lee says while the cost of generating power is declining, the cost to deliver it is going up.

“By 2030, the [US] electricity utility industry will need to make a total investment of $1.5 to $2 trillion in order to maintain this electricity grid,” Lee said, speaking recently at the MIT Energy Conference in Cambridge, Massachusetts.

“So, to me, it doesn't make sense. Why are we transporting electricity large distances when it costs so much to do so when we can just generate that electricity at the home where it's being used in the first place?”

Since 2010, the cost to install solar panels has decreased by nearly two-thirds, and batteries have fallen in price by 84 percent, according to the energy research firm Wood Mackenzie.

Impressive. But the solar storage revolution may just be getting started.

“Today, it's considered to be sort of the sexy thing in the world of energy, but it's still a fairly new technology, if you step back and think about the overall grid,” says Ravi Manghani, Wood MacKenzie’s head of energy storage.

Manghani says the US is a leader when it comes to solar-powered batteries. Still, he says we need better state policies to encourage more homes and businesses to install them.

“There are some other countries that have done extensive work on energy storage, and we've seen deployments in those countries, namely South Korea, the United Kingdom and now increasingly China as well,” says Manghani.

Australia, Germany, Japan, Canada and India round out the list of global leaders. Manghani says in the past five years, “the world began to experiment with storage.”  In the next five, he says it will become a key asset for the electricity grid, and he projects that energy storage deployments will increase thirteen-fold.