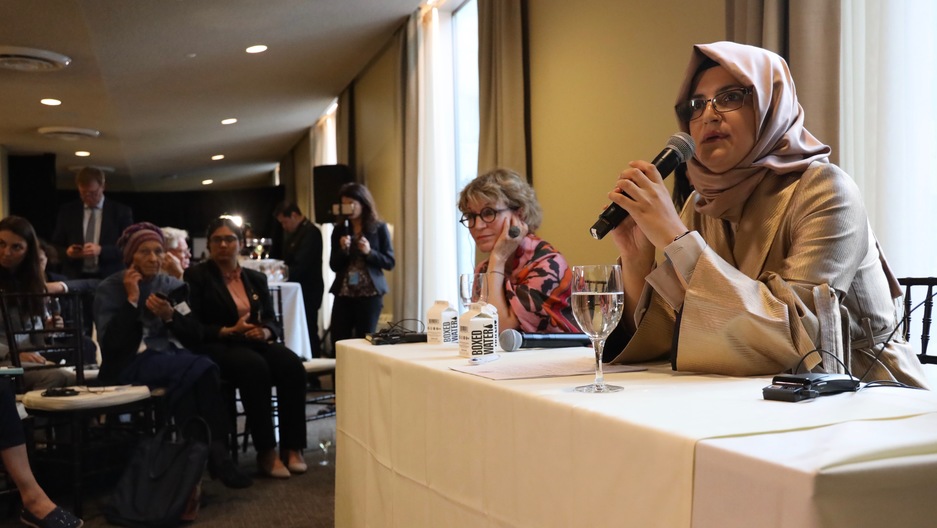 Hatice Cengiz speaks at the Human Rights Under Siege event in New York City on Sept. 26, 2019.

Saudi Arabia's crown prince said he bears responsibility for the killing of journalist Jamal Khashoggi last year by Saudi operatives "because it happened under my watch," according to a PBS documentary.

It is the first time that Mohammed bin Salman, the kingdom's de facto ruler, has publicly indicated personal accountability for the killing inside the Saudi consulate in Istanbul by operatives seen as close to him. The CIA and some Western governments have said they believe he ordered it, but Saudi officials say he had no role.

The death sparked a global uproar, tarnishing the crown prince's image and imperiling ambitious plans to diversify the economy of the world's top oil exporter and open up cloistered Saudi society. He has not since visited the United States or Europe.

Listen to Smith talk about his reporting in Saudi Arabia and Khashoggi’s murder, below:

After initial denials, the official Saudi narrative blamed the murder on rogue operatives. The public prosecutor said the then-deputy intelligence chief ordered the repatriation of Khashoggi, a royal insider who became an outspoken critic, but the lead negotiator ordered him killed after discussions for his return failed.

Saud al-Qahtani, a former top royal adviser whom Reuters reported gave orders over Skype to the killers, briefed the hit team on Khashoggi's activities before the operation, the prosecutor said.

A senior US administration official told Reuters in June the Trump administration was pressing Riyadh for "tangible progress" toward holding to account those behind the killing.

Eleven Saudi suspects have been put on trial in secretive proceedings, but only a few hearings have been held. A UN report has called for Salman and other senior Saudi officials to be investigated.

Khashoggi, a Washington Post columnist, was last seen at the Saudi consulate in Istanbul on Oct. 2, 2018, where he was to receive papers ahead of his wedding. His body was reportedly dismembered and removed from the building, and his remains have not been found.

At an investment conference in Riyadh a few weeks after the murder, the crown prince called it a "heinous crime" and a "painful incident," promising to bring to justice those responsible.

Khashoggi's fiancée, Hatice Cengiz, told an event on the sidelines of a UN annual gathering of world leaders that she had two questions for the crown prince: Who gave the order for Khashoggi to be killed and why?

"By confessing this, he's also distancing himself from the killing of Jamal. He's saying that it happened under his watch but he means he is not involved in this crime. His statement is a pure political maneuver."

"By confessing this, he's also distancing himself from the killing of Jamal," Cengiz said, speaking through an interpreter.

"He's saying that it happened under his watch, but he means he is not involved in this crime. His statement is a pure political maneuver."

Related: Politics complicate the hajj spiritual journey for some Muslims

Cengiz spoke with The World's Shirin Jaafari about her message for world leaders and how she's been affected by Khashoggi's death.

Shirin Jaafari: First, can you say a little about yourself, your background?

Hatice Cengiz: For almost a year, since I make appearances on TV channels, people have gotten to know me as the late Jamal Khashoggi's fiancée. But actually, before I met Jamal, I was pursuing an academic degree and I was a researcher specialized in Middle Eastern studies and Arab geography. But right now I'm going through a very complicated period. Though I was, you know, bringing the foci on this geography and the relations of those countries, now, kind of, I put a distance between that geography and myself.

What do you mean by that? Do you mean that your work is now too painful because of Jamal's death?

What I mean is, Occidental countries have not overcome their issues yet. So, I've been always interested in that geography as a researcher and as an academician. And what was surprising for me was to find myself as part of an incidence related to this geography. This doesn't mean that I gave up on my academic studies related to Middle Eastern studies. But I had to take a break for awhile to improve my English and definitely, I will pursue my academic degree in this field.

And as you can also appreciate, I also needed a break due to this psychological impact of Jamal's murder. There is also the spiritual aspect of this. And just imagine any ordinary person on the street is already moved by Jamal's murder, and I am the one who was in, you know, total, unexpected shock.

Can you talk a little bit more about how Jamal Khashoggi's death has impacted you? You know, it's been a year — how are you feeling?

So, I can say that I've been going through a transitional period. Actually, there are two dimensions that I can talk about. As a person, I was already following Jamal's column, you know, and he was a very precious journalist and very important critic to me. And speaking of my, you know, private part of my life, he was so special and so dear to me. And I can say that we lost one of those few beautiful, irreplaceable people that the world could really cherish, and I say, he was such a precious person.

He was coming from the field as a journalist. He used to be a war correspondent for a long time in different countries and then he was promoted as an editor in media and became a TV commentator. And his opinions were frequently consulted internationally and for this reason, and also thanks to these experiences that he built internationally, his opinions were so precious and he was so far-sighted. He always accurately interpreted the future prospects, you know, related to the Middle East. Even now, when an incidence takes place or an issue comes up in the agenda or in the news, I'm like, I wish Jamal were here, and definitely that they will call him to get his opinion because he became a prominent figure and an expert in the Middle East.

Speaking on my part, you know, I can say I lost my joy of life to a great extent. And then I started to think, like what could be more precious than Jamal's heart, and I lost him and what could life bring to me that I could treasure more than him. So, and I also came to realize that we all are so close to death, you know, like through a thin thread we are connected to life. And this is the psychology that Jamal's murder left to me. And even in the 21st century, the Middle Eastern countries are still debating freedoms, human rights, fundamental rights and freedoms, and how to flourish them in the respective Middle Eastern countries.

But I believe that the Oriental countries have still a long way to go in this field. And when Jamal's murder took place, the countries, you know, some countries demonstrated their economic relations with Saudi Arabia as a pretext or some said, "Oh, we have oil interests." Some said, "No, we have weapon deals," et cetera. But a right to life of a person was violated, a person was massacred. Then it's so sad to see that the world order cannot defend a right of a victim, a person who was assassinated. So, this is what I've been thinking and I started to actually also question the role of international institutions, including the United Nations.

Has it been hard for you to find closure given that Jamal's body has not been found and the fact that the perpetrators have not been brought to justice?

Of course, I cannot find closure. I'm a normal human being and as a normal human being, when you go through trauma you need to face that reality. So, I couldn't do that because I just received a call saying that he died. He was killed. I couldn't see his body. I couldn't see it in person. And that's why I couldn't accept the fact that Jamal was murdered. And this caused huge agony on my side. And both for myself and for his family, it was so difficult to accept his loss.

Jamal was a very ethical journalist, always maintaining his objectivity about his country. Jamal did no wrong to his country or to anyone. But despite that, he was punished by Saudi Arabia. So, the message I'm trying to give here, on this occasion, is that we need to see justice taking place.

It shouldn't be something that we're just debating for a year. And this country, Saudi Arabia, should learn that absolute power does not give them the grounds to act any way they want. So, if you have realized, I don't keep reiterating this story, or the incidents per se. I'm trying to address the conscience of people and the hearts of people and ask people try to consider the humane aspect of Jamal's loss.

What has helped you through this tough period, do you think?

I held onto the memories that Jamal and I had built together. Primarily, my mother, my siblings and Jamal's friends and so many friends of Jamal contacted me and have been of great support to me. And secondly, my experience in the UK. In due course, I tried to improve my English there; it also helped me a lot. And thirdly, I guess my creed in God Almighty. And because without, you know, having such a belief in the fact that someday we all will be held accountable for our deeds and actions, I think I wouldn't be able to overcome this period.