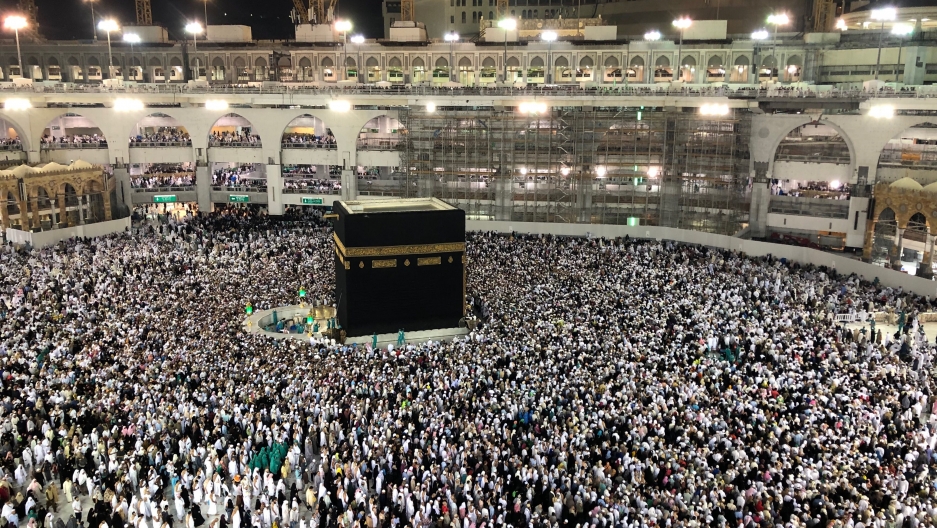 Every year, millions of Muslims from around the world descend upon Mecca, Saudi Arabia, for the hajj.

Growing up in New Jersey, Aymann Ismail loved going to school in the days leading up to the annual hajj, a spiritual journey to Mecca, Saudi Arabia.

At school, the teachers knew how to make the event fun. "They would make, like, a fake Kaaba," out of giant cardboard boxes — re-creating the house of God, a giant, cube structure in Mecca, Saudi Arabia, the holiest site in Islam.

"All of us would go around it, and be like, [chants in Arabic, 'Here I am at thy service O Lord, here I am']," Ismail said. "It was one of the things that we did every year in celebration of the hajj, and it was a nice experience."

This August, roughly 2 million Muslims will descend upon Mecca to complete the hajj. It's compulsory for every Muslim at least once in their lifetime, as long as they are in good health and can afford it. Muslims believe the hajj cleanses their soul and brings them closer to God.

But this year, some Muslims are grappling with whether they should go — for political reasons.

Like Ismail, who's long wanted to make the hajj. Some time ago, Ismail, who lives in New York now, looked into the logistics of the trip. Between the flights, hotel, visa and food, he estimated it would total $10,000.

Not cheap, he says, but he was committed. So, he started saving. By early last year, Ismail says he was well on his way to reach the $10,000 goal. His dream of performing the hajj felt within reach.

Then, things started to get complicated. Headline after headline described atrocities committed by the Saudi state. There was the murder and dismemberment of columnist Jamal Khashoggi. The crackdown on activists. The Saudi war in Yemen.

One news story out of Yemen struck a chord with him: An airstrike on a school bus last year killed dozens of children. CNN obtained footage recorded by one of the boys just an hour before the bus was hit.

"That was a Saudi jet plane that fired that missile," Ismail said. "I can't be complicit in that."

All of this has made Ismail question whether he should go now.

"There’s two parts of my responsibility as a Muslim who are in conflicts with each other right now. One part of me is saying, ‘Aymann, you have to go. This is one of the most important rituals of your life.’ And the other part of me is saying, "Yo! That money that you’re going to pay for [the] visa or the money that you’re going to spend there ... all of that money might go to killing children. How do I reconcile both of those two facts?""

"There’s two parts of my responsibility as a Muslim who are in conflicts with each other right now," he explained. "One part of me is saying, ‘Aymann, you have to go. This is one of the most important rituals of your life.’ And the other part of me is saying, "Yo! That money that you’re going to pay for [the] visa or the money that you’re going to spend there ... all of that money might go to killing children. How do I reconcile both of those two facts?""

Every year, when hundreds of thousands of Muslims from around the world go to Saudi Arabia for pilgrimage, they also bring business. They stay at hotels, ride in taxis, eat in restaurants and shop for souvenirs.

"Hajj and umrah, or religious tourism, in general, in Saudi Arabia is a really important source of revenue," said Karen Young, resident scholar at the American Enterprise Institute, who studies the political economy of Gulf states.

"It makes up about 7% of the total [gross domestic product]. So, this is a pretty significant part of the economy," Young said.

Related: Cracking up or cracking down? For Saudi comedians, the red lines are a ‘moving target.’

Young adds that oil revenues remain the largest contributor to the Saudi economy, but that the kingdom wants to reduce its dependence on oil and as part of that, it plans to triple the number of pilgrims going to Saudi Arabia in the next decade.

"The hope is that these pilgrims go on to become tourists and visit other places within Saudi Arabia. So, visa rules have been changed to both encourage people to extend their visits and also to charge them more. Especially for repeat pilgrims."

"The hope is that these pilgrims go on to become tourists and visit other places within Saudi Arabia. So, visa rules have been changed to both encourage people to extend their visits and also to charge them more. Especially for repeat pilgrims," she said.

About 20,000 Muslims from the US are expected to go on the hajj this year.

Sattaur says he hasn’t seen any significant drop in the number of Muslim Americans booking with his agency.

"No, not at all. It hasn’t impacted our packages sales at all."

Last year, when the news about Khashoggi broke, Sattaur worried it might impact his business. It didn't. Maybe because some Muslims have decided to separate the politics of Saudi Arabia from its religious significance.

That includes Yasir Qadhi, dean of academic affairs at The Islamic Seminary of America. He is going to Saudi Arabia in two weeks, he says, only because it’s home to two of Islam’s holiest sites.

"Those sites are considered sacred by God. And politics changes. Kingdoms come and go, kings come and go [...] and the sanctity of the place remains," Qadhi said.

Qadhi has completed the hajj 16 times in the past, often as a religious leader for tours. This year, he’s leading a group of 200 Americans.

But what about Ismail’s concern — that by showing up in Saudi Arabia, by spending money there, Muslims could be indirectly complicit in the kingdom’s human rights abuses?

"Well, there is an element of truth to that, I must confess," Qadhi said. "But at the same time, we can flip it around. I am an American citizen. I was born and raised here, and I am very very thankful to God. And I am definitely thankful for having the experiences of this country. It's given me a lot. At the same time, I am highly critical of many aspects of the country I live in, especially its foreign policy. If that argument were to be flipped around, and I would be told, ‘Why are you living in this land when your tax dollars are being spent on such-and-such?' The response to that is that, well, an infinitely small amount of my personal tax dollars are going there and overall, the benefit that comes for me to live here, for myself, my family, my faith, my people, my country, far outweighs the small percentage of money that my taxes might impact on what I disagree with."

Recently, a high-ranking religious leader in Libya called for a boycott of the hajj.

But Ismail is not advocating a boycott. He says this is a personal decision that Muslims have to make for themselves. He says he is mad at the Saudi government for putting this doubt in his heart in the first place.

"I really, really hope that one day, inshallah, the custodians of Mecca [Saudi leadership] will empathize with the way that they have made Muslims feel around the world."

"I really, really hope that one day, inshallah, the custodians of Mecca [Saudi leadership] will empathize with the way that they have made Muslims feel around the world."

He says he will participate in the hajj one day. But he’s just not ready yet.