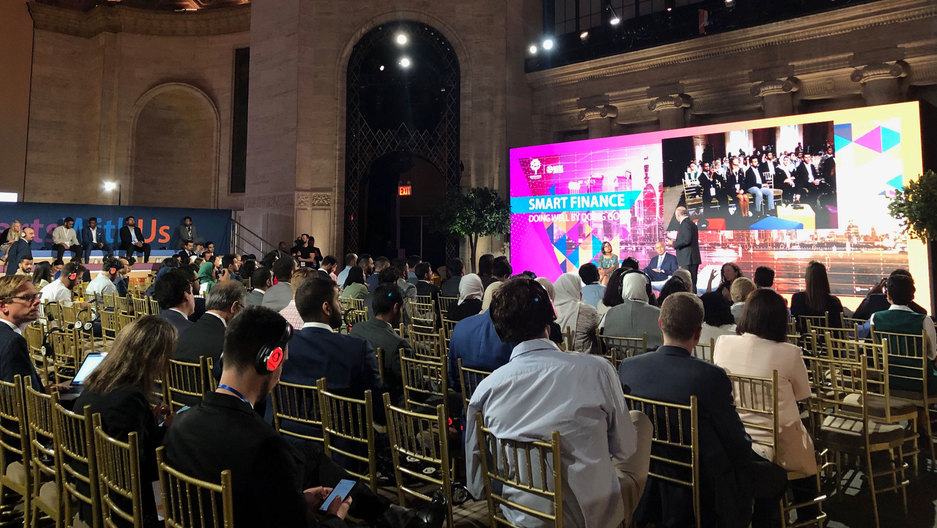 The Misk Foundation, founded and chaired by the Crown Prince of Saudi Arabia, held a controversial event on the sidelines of the United Nations General Assembly this week.

This week, the Misk Foundation, a charity organization founded and chaired by the Crown Prince of Saudi Arabia, Mohammad bin Salman, held what many said was a controversial event in New York City.

The blurb promoting the event — a "Youth Forum" — contained all the buzzwords: promoting “sustainable development, entrepreneurship, empowerment” and “good governance.”

The event, originally co-sponsored by the UN’s Office of the Secretary General’s Envoy on Youth, was scheduled to take place on Monday in the New York Public Library’s Stephen A. Schwarzman branch.

But after the event's location was announced, human rights advocates were up in arms about Saudi Arabia's involvement.

“Cancel Saudi Dictator Event in New York,” read a petition put together by Freedom Forward, a group that “works to end US alliances with nondemocratic governments, including dictators, kings, and apartheid systems.”

The petition collected about 7,500 signatures.

Activists also called on the guest speakers to pull out of the event.

With only a few days to go, the New York Public Library announced last Wednesday that it would be pulling the plug on the event. It cited "concerns about possible disruption to Library operations as well as the safety of our patrons" as the reason behind its decision.

Some of the scheduled speakers dropped out of the event too.

Organizers scrambled to find an alternative venue. And when they did, they kept the location secret until just hours before the event.

Then, on Monday, just a few hours before the "Youth Forum" was about to start, invitees received an email with the new location: Cipriani, an event space on Broadway, mere blocks from the 1 World Trade Center and steps from the Sept. 11 memorial in lower Manhattan.

Inside the venue, men and women in white tuxedos served drinks on silver trays. About 250 people, mostly young and all very stylish, stood chatting away.

The "Youth Forum" was scheduled to be co-hosted by the United Nations’ youth envoy Jayathma Wickramanayake. But she, too, dropped out at the last minute following public pressure.

One of the attendees, Omitogun Abolaji, who is from Nigeria but lives in Washington, DC, works for Making Cents International, a global development consulting firm.

“I’m here representing my organization, and as an individual, I’m interested to see what young change-makers are doing,” Abolaji said, adding that the costs for his trip were paid through his organization, not Misk.

“Back home in Nigeria, I work with young entrepreneurs in various spaces including agriculture, tech,” Abolaji said. His goal is to connect with other business owners, learn new ideas and to take those ideas back home, he added.

Abolaji was skeptical of the rights activists’ shaming tactics.

The "Youth Forum" took place only 10 days before the anniversary of the murder of Jamal Khashoggi, the Washington Post columnist.

Both the CIA and an investigation by the UN concluded that high ranking officials within the Saudi government were responsible for Khashoggi’s murder.

The Misk Foundation, Crown Prince’s charity organization, has deep pockets. (But the Bill & Melinda Gates foundation ended its relationship with Misk after the Khashoggi murder.)

Princess Reema, Saudi Arabia’s ambassador to the US, attended the Misk Forum, along with dozens of Saudi students on scholarships from their government.

Agnes Callamard, the UN expert and lawyer who investigated the murder of Jamal Khashoggi, told The World in an interview in New York that she is concerned that for some people, it’s business as usual when it comes to dealing with Saudi Arabia.

“The lack of commitment to hold Saudi Arabia to account, coupled with the commitment to continue political and commercial and financial relationships with Saudi Arabia is sending an extremely wrong message to the international community,” she said. “That message is, if you have the financial might, then you can do more or less whatever you want.” 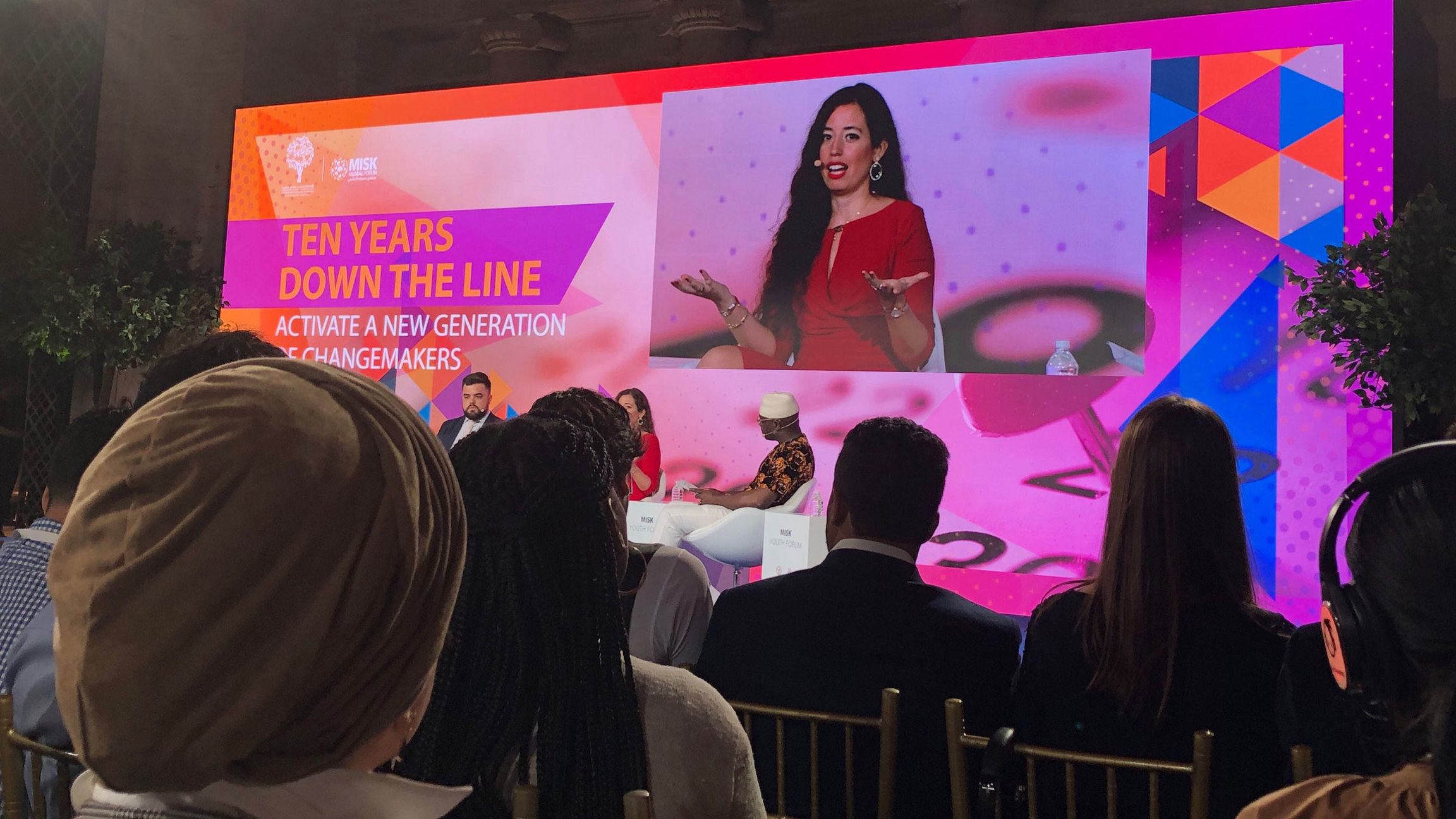 A presenter takes the stage at the Misk Foundation's Monday event in lower Manhattan. The event was moved from the New York Public Library after a petition was circulated by human rights advocates.

But for Shaima Hamidaddin, executive manager at Misk Foundation, Monday’s event was a big success.

“Nothing stands in our way when it comes to youth empowerment,” she said.

“Like any event, we come across challenges. We always find a way to overcome these challenges,” she added, referring to the public library’s cancellation earlier on Monday.

“Honestly, I don’t quite understand [the concerns] because we’re doing so much good,” she said, listing a series of initiatives the foundation is involved in, such as Misk’s “Entrepreneurship World Cup,” a start-up incubator supporting 100,000 ventures from all over the world.

But to Sunjeev Bery, Executive Director of Freedom Forward, the group that started the petition which led to the event’s initial cancellation, the outcry marked an important moment.

“Even though the Saudi dictatorship still technically had an event in New York, it was an event that was a far cry from what they intended,” he said. “Multiple speakers dropped out and they were even dropped by the United Nations itself.”

Bery said he sees this as a good example of how grassroots activism can work.

Both Bery and Callamard said they would continue their efforts to hold Saudi Arabia accountable for its human rights violations, as some governments, celebrities and powerful figures have decided to turn a blind eye.