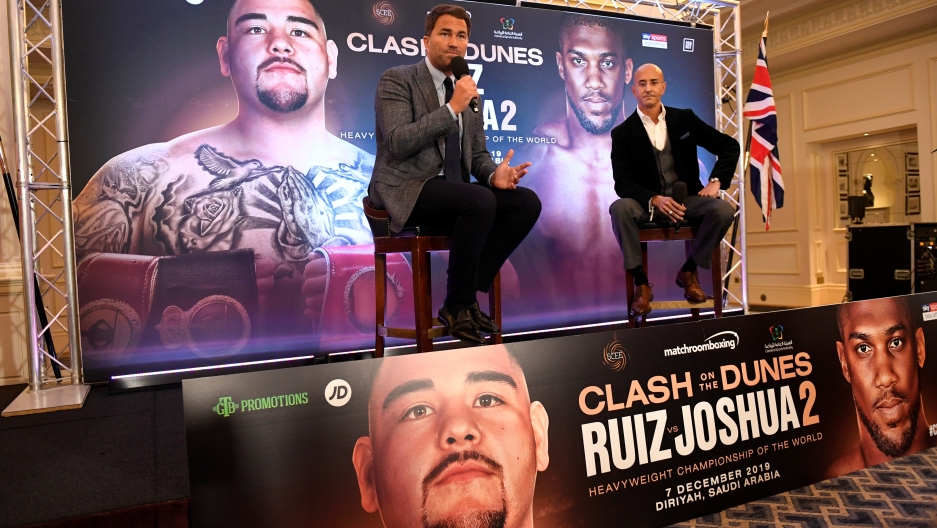 News of a prizefight set to take place in Saudi Arabia in December has riveted boxing fans but outraged human rights advocates, who pointed at a new trend — “sportswashing” — in which countries with questionable human rights reputations organize mass sporting events to escape international opprobrium.

"Clash on the Dunes," the upcoming rematch between British heavyweight champion Anthony Joshua, and Andy Ruiz Jr, the Mexican American who defeated Joshua, is generating excitement across the boxing world. When news of the location for the prizefight went public last week, Felix Jakens of Amnesty International UK, a nonprofit organization, said the heavyweight contest was "likely to be yet another opportunity for the Saudi authorities to try to 'sportswash' their severely tarnished image.”

Anthony Joshua should “inform himself of the human rights situation & be prepared to speak out about Saudi Arabia’s abysmal human rights record” - says @felixjakens#joshuaruiz2 #SaudiArabiahttps://t.co/X2dxcKxfcE

Like whitewashing, critics see sportswashing as a deliberate distraction, a cover-up. And the term may be starting to stick.

The controversy over the Joshua-Ruiz rematch exploded last week when boxing fans learned it would be held in Saudi Arabia.

➡️No doubt A lot of money for Hearn and both men if this fight takes place in the Middle East, but should a fight like this take place there?#JoshuaRuiz2 pic.twitter.com/ATzufRrNbC

The Saudi monarchy has taken a beating in the press since the CIA concluded that the Saudi Crown Prince, Mohammed bin Salman, known as MBS, had ordered the assassination of Washington Post contributor Jamal Khashoggi inside the Saudi consulate in Istanbul, Turkey. The grizzly murder, taken along with the kingdom’s history of political detentions, public executions and suspected war crimes in neighboring Yemen, have made the Saudis — and MBS in particular — a magnet for criticism in the West. 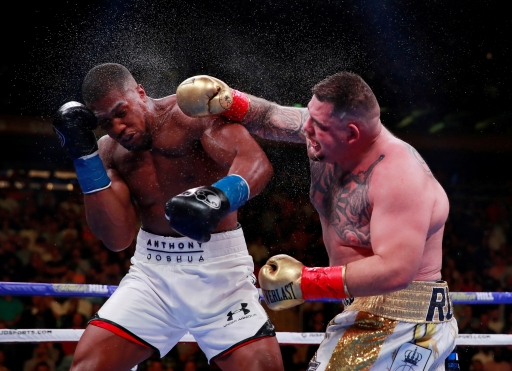 The Saudis have put up a small fortune — an estimated $100 million  —  to host the redo of this June’s upset title fight in which the little-known Ruiz knocked out Joshua, the world's heavyweight champion.

Anthony Joshua’s manager, Eddie Hearn, who arranged to bring the event to Saudi Arabia, calls "Clash on the Dunes" a game-changer for the sport of boxing.

“This is such a huge occasion for boxing, an iconic moment,” Hearn said in a press conference. “With the response that we’ve seen, mainly good —and some negative — I guarantee you with curiosity the whole world will be watching this fight.”

And that may be why Saudi Arabia decided to host it.

“People are saying that this is an attempt to deflect attention away from some of the failings of Saudi Arabia for some of the crimes of Saudi Arabia,” said Simon Chadwick, the director of the Center for Sport Business at the University of Salford in Manchester, United Kingdom.

After the Khashoggi murder in October, Saudi Arabia has hosted a series of sports events: The World Wrestling Entertainment’s (WWE) Crown Jewel, a wrestling extravaganza at a stadium in Riyadh on Nov. 2; Formula E racing, an all-electric car road race through the ancient streets of Diriyah on Dec. 15; golfing’s PGA European tour and football’s Supercoppa Italiana in January; the Red Bull Air Race in March, an extreme sports event in the planned city of Neom in April, and WWE’s Super Showdown, a wrestling match in Jeddah in June. Next February, the kingdom will host a high-profile horse race, the Saudi Cup, with a budget of $20 million.

Related: Cracking up or cracking down? For Saudi comedians, the red lines are a ‘moving target.’

The money being thrown around has caught a lot of attention.

News reports indicate that the challenger, Anthony Joshua, may make around $60 million from the rematch. The defending champion, Andy Ruiz, will earn a minimum of $9 million. Ruiz was the upset victor first time around, which makes the December rematch a must-see event for fight fans.

“As a Cali girl, I was overly excited for his victory [in June],” said Larry, who blogs about the sport at BoxHerNews. “This makes Ruiz the first Mexican American heavyweight boxer titleist. So that did a world of good for Mexico. It did a lot of good for Mexican American relations, I believe. It's just like the David-and-Goliath-type story that we hear so much in boxing.”

But Larry found it sobering that the rematch is to be held on Saudi sands.

“We can't just move on and just have a big fight there and forget that on Oct. 2 someone's life was brutally taken for having an opinion and for speaking his truth,” she said.

Larry said that as much as she would enjoy this historic rematch between a David and a Goliath, she’s not going to write about it. She’s not even going to watch it, she said, because in addition to being a boxing fan, she’s a journalist.

In the year before his assassination, journalist Khashoggi wrote and spoke critically about the Saudi government’s clampdown on reporters and intellectuals.

He told The World in 2017 that, as a US resident, it was his obligation to speak out about abuses in his home country.

"Because I'm free here [in the US]," he said. "And I will feel very much guilty if I continue enjoying my life being silent — when I can speak."

Larry said she does not take her speech freedom for granted.

Chadwick understands why critics use sportswashing to explain Saudi Arabia’s focus on high profile sporting events. But he also sees it as a legitimate way for the kingdom to diversify its oil-based economy. And he noted that Saudi Arabia is not the only country to promote sports while deflecting attention from its poor human rights record.

Chadwick points to the example of Qatar — host of the 2022 FIFA World Cup — which has escaped widespread condemnation despite its documented mistreatment of migrant workers building the stadiums. And, he said, China is also getting a pass.

“The Beijing Winter Olympics will take place during the first quarter of 2022," he said. "As we know there are considerable issues in Hong Kong right now. We know that the Chinese army is massing on the border. There are issues around China's supposed treatment of its Muslim population in the west of China. The question then becomes 'why are we talking about Saudi Arabia and a boxing bout when you have one of the world's biggest sports mega events about to head to China and really nobody's talking too much about China losing their hosting rights to that event.'”

Chadwick, the sports expert at the University of Salford, may be watching the fight on Dec. 7.

“Given my interest in sport, business and politics, boxing in Saudi Arabia is an intriguing proposition that has certainly got me paying attention again.”