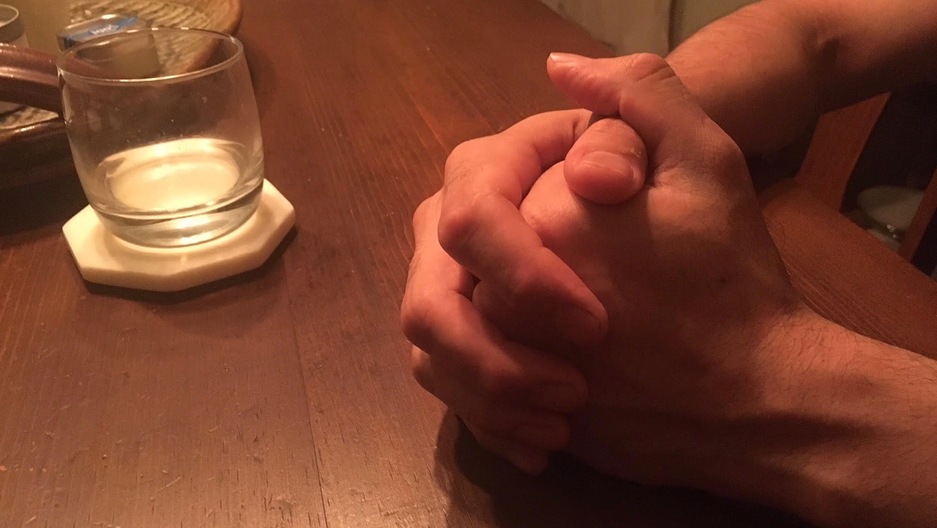 The informant's hands are shown.

“There were around 25 people,” Bilol said later. They included FBI, immigration authorities and NYPD officers. Even an ambulance arrived.

Related: What it’s like to become a US citizen after a lifetime of statelessness

Bilol (he asked that we not use his actual name for fear of retaliation) was undocumented, having overstayed the tourist visa with which he first arrived in the US in 2012. That night, he was asked to hand over his passport and was handcuffed and taken in.

For hours, he was interrogated by five FBI agents, including a woman from Ukraine who spoke Russian and a man from Dagestan who seemed Muslim, like himself. He recalled that they were polite and asked him numerous questions about his faith. Was he Shiite or Sunni? Did he approve of extremist acts? They showed him photos of other Uzbeks and asked if he knew them.

And then they proposed a deal. He could legally remain in the US, but only if he helped the FBI “catch criminals.”

Bilol insisted he had never interacted with criminals before, and wasn’t qualified to do what was being asked of him. But reluctantly, he agreed. In return, he received a letter from Immigration and Customs Enforcement that put off any deportation proceedings — so long as officials found it beneficial to their purposes.

The authorization was good for one year and required Bilol to “report periodically to a case agent or officer.”

Soon, he said, he was in regular touch with FBI agents, who had him spending time in various mosques around the city, especially those with Uzbek congregants.

From the beginning, Bilol told Gothamist/WNYC through an interpreter, he was ambivalent about the work, which had him asking Muslim worshippers for their stance on certain hot-button political issues, such as the civil war in Syria, and reporting back. At times, his FBI handlers chastised him for not doing his best.

This account is largely drawn from an interview with Bilol arranged through his lawyers. Gothamist/WNYC has tried to verify elements of it wherever possible, such as through using correspondence and text messages between Bilol and his government handlers.

Neither the FBI nor Immigration and Customs Enforcement responded to multiple requests for comment.

Bilol’s work as an informant began in the summer of 2017 and coincided with an important development that October. On the afternoon of Halloween, another Uzbek immigrant, Sayfullo Saipov, allegedly drove a truck down a bike path in lower Manhattan, killing eight people. This presumably made Bilol valuable to the FBI. The following February, he received another letter from ICE, renewing the agreement.

Related: A father with HIV was separated from his daughters at the border

Faiza Patel, a national security expert at the Brennan Center for Justice at the New York University School of Law, said immigrants like Bilol have been deployed by the FBI within Muslim communities for many years, especially since the Sept. 11, 2001, attacks. But she said this type of “fishing” is problematic.

“It creates distrust among community members. Because people are always looking at the guy next to them, and thinking, ‘Oh, is he an informant?’”

“It creates distrust among community members,” Patel said. “Because people are always looking at the guy next to them, and thinking, ‘Oh, is he an informant?’”

As time wore on, Bilol said he became more and more reluctant about working for the FBI. A few months ago, an activist in the Muslim community put him in touch with the Creating Law Enforcement Accountability and Responsibility (CLEAR) project at the City University School of Law for help.

Ramzi Kassem, a law professor who directs CLEAR, said Bilol appeared to be having a spiritual crisis.

“He used to go to the mosque out of a spiritual impulse,” said Kassem. “It used to feel good to go to the mosque, to be with his community, to worship together. And doing what he’s been doing for the FBI for the last couple of years, in order to avoid deportation, has turned what used to be a very positive and affirming feeling for him, something that was really central to his spiritual and social life, into something that he'd rather avoid doing. That he did with a heavy conscience.”

The CLEAR team had represented others who wanted to extricate themselves from informant deals. But when Bilol presented his situation, they opted to try something they hadn't done before.

“And so we started to think the antidotes — our strategy to counter secrecy and fear — should be sunlight, public scrutiny and community organizing."

Normally, according to Kassem, the FBI relies on two elements in dealing with informants: secrecy and fear. “And so we started to think the antidotes — our strategy to counter secrecy and fear — should be sunlight, public scrutiny and community organizing," he said.

With that in mind, the legal team prepared for Bilol’s next check-in with his FBI handlers in late July. In the past, the agents had texted him with instructions about where to meet them: A TGI Fridays in Sheepshead Bay, the parking lot of a Kohl’s department store.

This time, the meeting point was in Chelsea.

Before the scheduled appointment, Bilol and Kassem gathered at a nearby Starbucks with two other members of the CLEAR legal team, Tarek Ismail and Naz Ahmad. They were joined by a select group of invitees, namely immigrant rights activists and other members of New York’s advocacy community. They were there in solidarity with Bilol.

One of them, Fahd Ahmed, is the executive director of DRUM Desis Rising Up and Moving, a group that represents South Asian immigrants in Queens, many of whom are themselves undocumented. He said the strategy that Bilol and his team had adopted represented “a growth in our community’s ability to be able to self-organize and to try to set the terms and conditions. And to respond from a place of power rather than being cornered into a place of fear.”

The group exited the Starbucks and made their way to the meeting point around the corner. Bilol and his lawyers took their place on one side of the street while the activists gathered on the other.

A few minutes before the scheduled check-in, Kassem composed a text from Bilol’s phone.

“Alright, so I'm about to send this text message that says 'I'm here with my attorneys on the northwest corner,' just to let them know he's not alone. Because we're dealing with armed FBI agents, and we don't want there to be any surprises.”

He hit “send” and the group waited.

Bilol, meanwhile, was quietly taking it all in. He’d decided to break up with the FBI right there, in plain sight in the middle of Manhattan. When I asked him what it was like to interact with his FBI handlers, he said they made him feel “bad” because they tended to take his words and “twist them,” attribute a different meaning than the one he intended.

A few minutes later, an SUV with tinted windows drove by. It was the sort of vehicle that his handlers often used, but instead of stopping, it kept driving.

This didn’t surprise Kassem or the other attorneys, who’d assumed that Bilol’s text announcing their presence would fundamentally change the equation and perhaps scare off the agents, who were used to going about their work discreetly.

A few minutes later, however, Bilol’s legal team got a call from those who apparently were his FBI handlers. Kassem announced that he was Bilol’s attorney. “Our understanding is that you are with the FBI and you are interested in working with him. Is that correct?”

The woman on the other end remained polite and vague, neither confirming nor denying that she was with the FBI. She simply said Bilol has been “voluntarily providing information, on his own accord.”

Bilol, Kassem told her, “is not going to be working with you all anymore. And if you have any questions, please contact us.”

Afterward, the group assessed the situation. Among the activists in attendance there was a low-grade excitement. A couple of them predicted that Bilol had likely seen the last of the FBI. “To them, your cover is blown,” one woman said.

Bilol simply said he was happy, and thanked his supporters, before leaving for work.

Several days later, despite his attorneys insisting that all communications be routed through them, Bilol received a text message from the FBI handlers: They wanted him to show up in the lobby of 26 Federal Plaza, in lower Manhattan.

This is where the FBI offices are located. It’s also where Immigration and Customs Enforcement is located. Kassem, however, wasn’t worried.

“Really what they’re doing here is just rolling the dice, and seeing if he’ll go along with it,” he said.

Bilol and his attorneys skipped the appointment. In the two weeks since, they haven’t heard anything else. Still, it seems unlikely that the FBI is simply going to disappear. And for Bilol and his team, that could present a problem: if he is deported to Uzbekistan, he could be outed as someone who spied on Muslims for the FBI. And in heavily Muslim Uzbekistan, that could lead to retaliation.

Meanwhile, Bilol has tried to repair the damage he’s inflicted on the communities he infiltrated. He’s been meeting with Muslim leaders and detailing his work as an informant.

One of those community leaders, Imam Hassan Raza, presides over the Al-Ansar Center, a mosque in Bensonhurst, Brooklyn. The imam said Bilol had confessed to monitoring the goings-on at the mosque, including the Uzbek language class that is offered.

“He seemed to be sad, he seemed to be upset at what he had done," he said. "He had come in with hopefully a sincere heart to really apologize and to stop what he was doing. Obviously, coming out with this type of testimony is not an easy task. He knew we would be upset.”

The center was previously spied upon by NYPD informants, prompting a lawsuit that ended in a settlement. Those revelations, said the imam, had been devastating to the congregation, and resulted in as much as 50% lower attendance, by his estimate, and fewer donations. The news particularly alienated young worshippers, he said.

Remarkably, Imam Hassan and one other member of the mosque who is privy to Bilol’s spying decided that they wouldn’t bar Bilol from the mosque, and he said he’d seen him on at least two occasions since he confessed.

But with these latest revelations, he didn’t know how he’d break the news to his remaining congregants, nor how they’d respond.

Arun Venugopal is a reporter who focuses on issues of race and immigration at WNYC. You can follow him on Twitter at @arunNYC.

This story originally appeared in Gothamist.