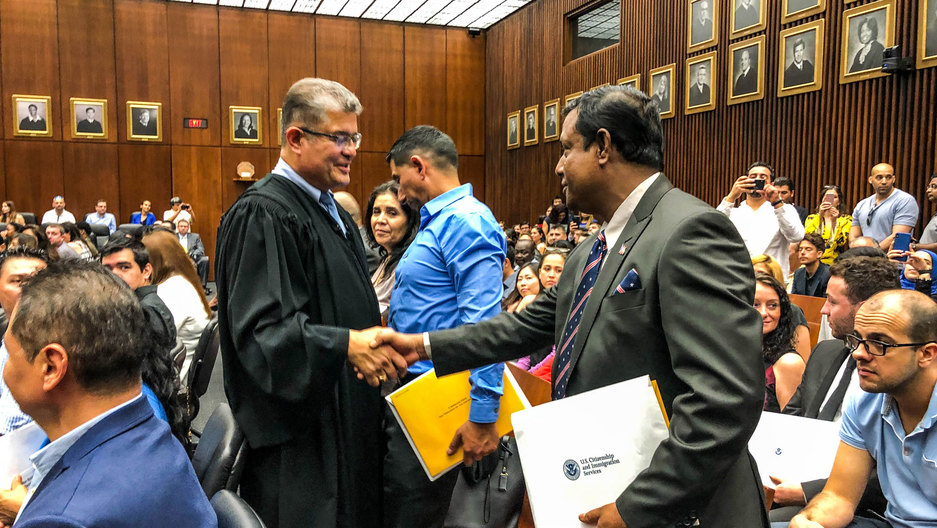 Nasir Zakaria, right, a Rohingya refugee who was resettled to the US, shakes hands with Judge Ruben Castillo following Zakaria's naturalization ceremony in June.

Nasir Zakaria had never been a citizen of any country until he became an American this summer, at age 42.

Like most Rohingya people, he had been stateless, meaning his country did not recognize him as a national. He was born and raised in Myanmar’s Rakhine State, where he and his fellow Rohingya faced routine persecution because of their minority status. In 2013, he came to the US via the United States’ refugee resettlement program.

This summer, at his naturalization ceremony at a Chicago courthouse, he said it was the first time he felt truly settled.

“Today is like a new life … I’ve never been a citizen in all my life. Today means I have a new future.”

“I feel like a newborn baby,” he said after the ceremony. “Today is like a new life … I’ve never been a citizen in all my life. Today means I have a new future.”

Zakaria’s path to US citizenship included years of hard work supporting his community. Three years ago, he founded Chicago’s Rohingya Cultural Center, a community space on the city’s northwest side that has become a hub for some 1,600 Rohingya refugees who have settled in the area over the past decade. The center offers English lessons, Quran classes, cultural events and after-school homework help for children.

The center also offers citizenship classes, which gives adults English-language skills and an overview of US history, politics and civics knowledge. The classes help them pass their naturalization interviews with US Citizenship and Immigration Services.

Tens of thousands of Rohingya refugees have been resettled to the US in the past five years, the majority of them between 2015 and 2016, according to State Department statistics. The Trump administration has made steep cuts to refugee admissions in recent years. As more and more of Rohingya approach the five-year mark of permanent residency in the US, they are becoming eligible to apply for citizenship. Zakaria was among the first from the Chicago community to be naturalized.

“Our country, they keep us out and they kill us, so we don’t have any rights,” Zakaria said of Myanmar. “That’s why American citizenship is so important. It’s powerful. You have freedom of religion here. In this country, I feel more free than ever before.” 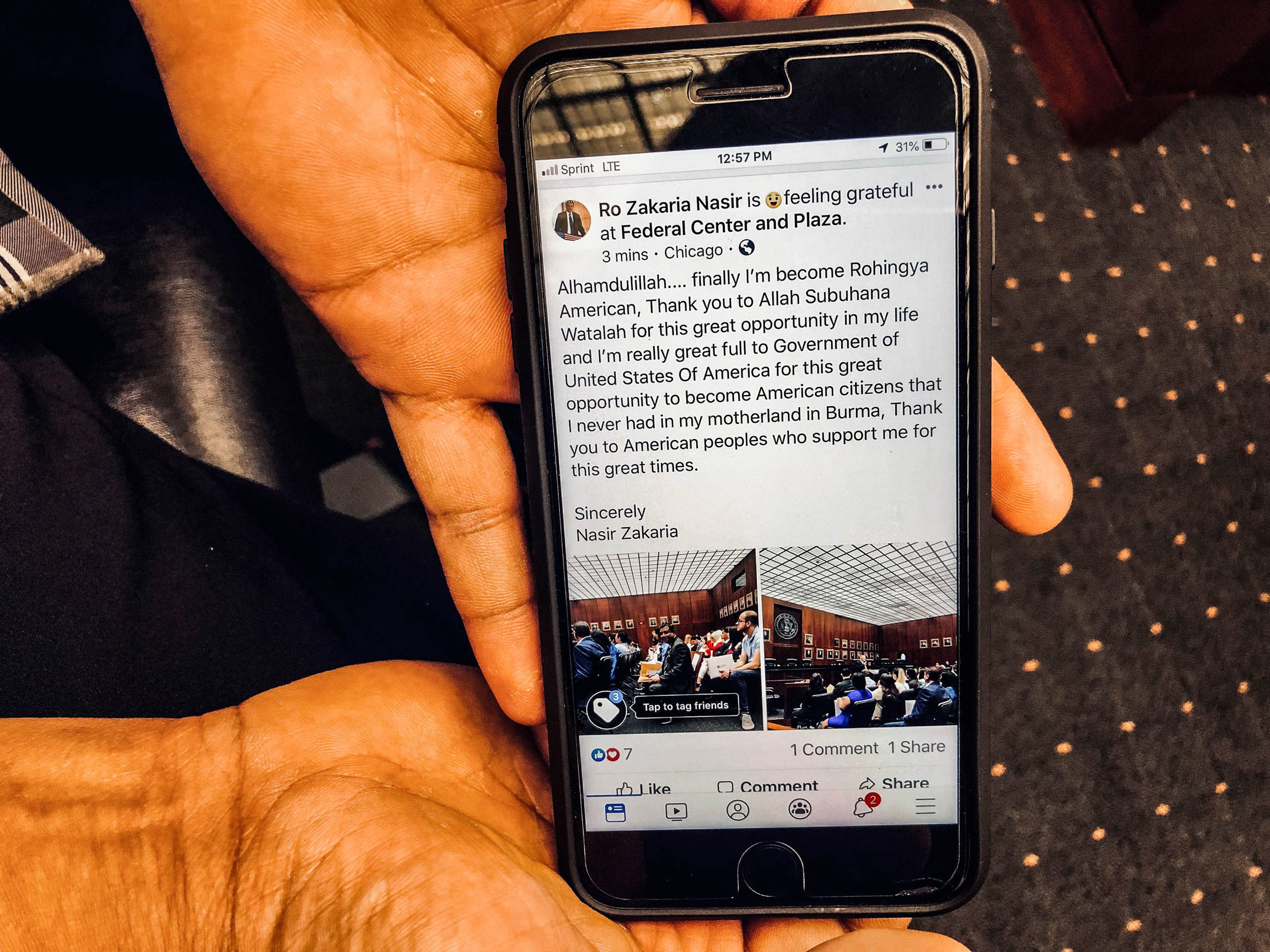 Nasir Zakaria shows his Facebook status, updated right after his US naturalization ceremony.

The citizenship class at the Rohingya center is taught by Susan Chestnut, an English-language teacher for non-native speakers. Though Chestnut had previously taught citizenship courses, she had to develop a totally new curriculum for her Rohingya students: Most had never learned to read and write and had never attended school.

“They don't have a concept of ‘citizen’ because they are not citizens anywhere,” she said.

Chestnut teaches them about American culture, politics and history. She covers everything from US holidays — “We did Halloween, Thanksgiving, we acted out trick-or-treat” — to the meaning of democracy and how US elections work.

Citizenship, she tells them, is about “having a voice” on how one’s country works. They are excited to vote for the first time.

Her students range in age from their 20s to 60s. Many work service jobs as maintenance workers and cleaners in Chicago’s O’Hare airport or casinos and come to class on their way to work. Most face a steep learning curve when they first land in Chestnut’s classroom.

“My students have never been in school. And so the first time they've been in a school setting is with my classes,” she said. “When they come in, they don’t know how to hold a pencil, how to make a letter.” 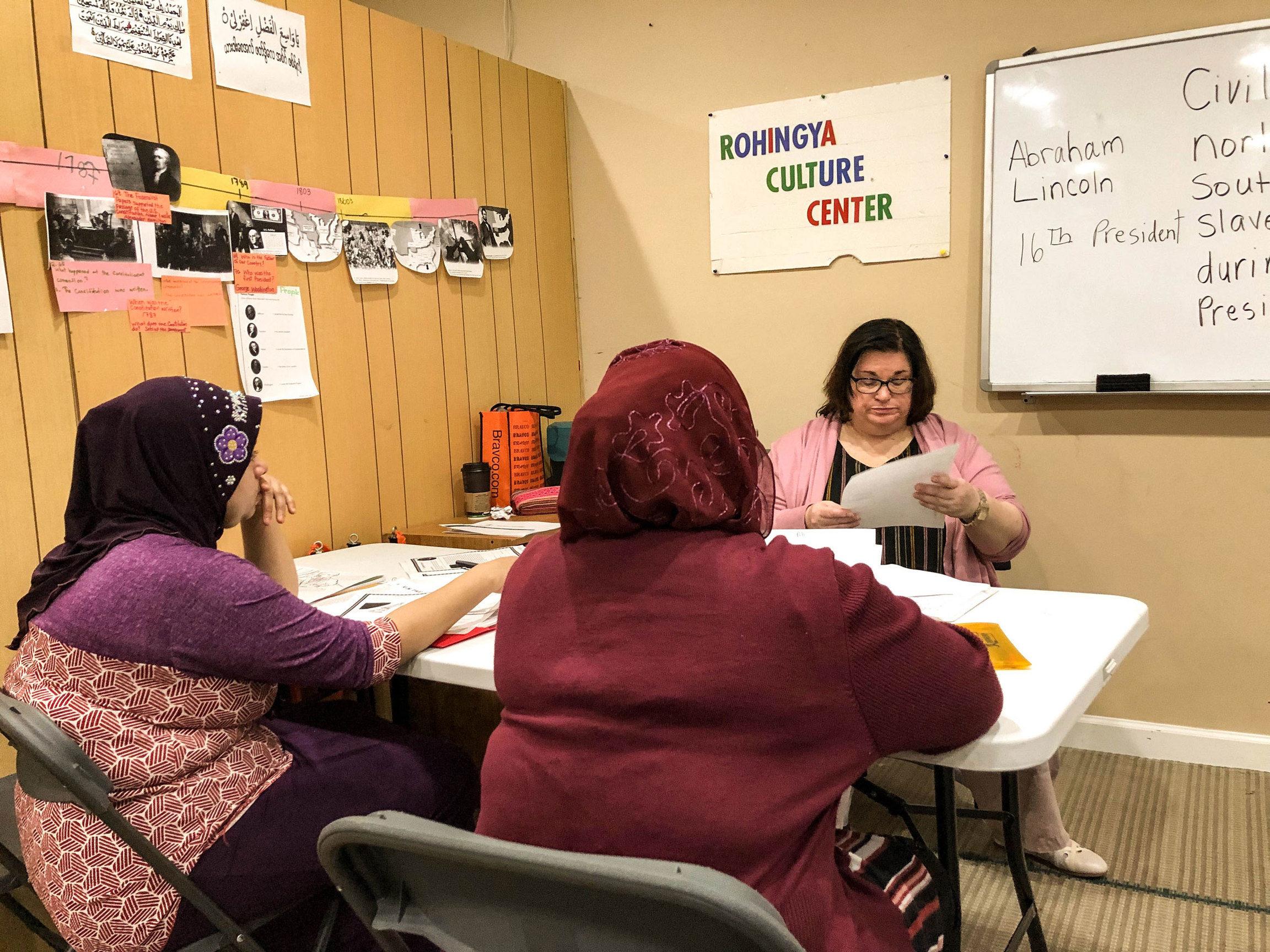 On a recent Tuesday morning, she stood before eight pupils as they went over the questions on the N-400, the application US permanent residents must fill out prior to their interview with a US citizenship officer.

“Genocide. What is genocide?” Chestnut asked. The word appears on the N-400 in a section that inquires whether applicants have ever been involved in a serious crime.

“Killing everyone,” one student offered.

“Treating the people bad,” said another.

“Yes,” Chestnut said. “Genocide is what happened to your people.”

The class sometimes turns into group therapy. Many Rohingya have trouble speaking about the atrocities they experienced or witnessed in Myanmar or in exile, Chestnut said. In class, they’re also gaining the vocabulary to describe what happened to them. The United Nations has said Myanmar’s treatment of its Rohingya minority is a “textbook example of ethnic cleansing” and has warned of the risk of genocide. Some 700,000 Rohingya are refugees in Bangladesh after the most recent round of displacement in 2017.

Chestnut tutored Zakaria privately as he prepared for his citizenship interview this spring, and then for his naturalization ceremony this summer.

Zakaria founded the Rohingya Cultural Center in 2016 with financial backing from the Zakat Foundation of America, an Islamic nonprofit based in Chicago. It’s often the first place local Rohingya refugees turn when they need help deciphering a cable bill, job application or letter from a government agency.

The idea for the center stemmed from his own experience acclimating to life in the United States.

“I got a letter from the government, and I couldn't read it,” Zakaria said. “So I walked into a restaurant and asked a stranger to help me.”

He now serves as the center’s president and spokesperson. His cellphone constantly rings with requests for help from local Rohingya seeking job leads or housing. 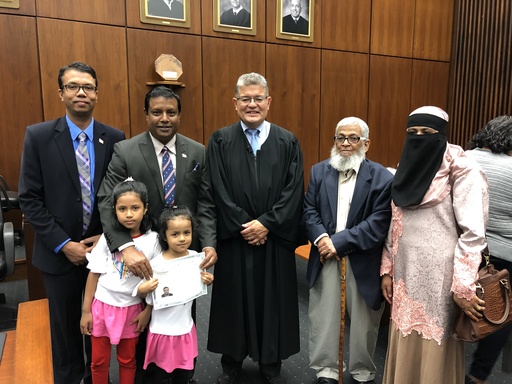 Zakaria fled Myanmar alone as a teen, he said, to escape capture by the country’s armed forces. He lived in Bangladesh, then Malaysia, where he was granted refugee status. But like other Rohingya refugees in Malaysia, he did not have access to public services, education or legal employment.

It would be another two decades before he was resettled to the United States in 2013, along with his wife, Laila Binti Mohamad Husan, and his grandfather. They were sent to live in Chicago. Zakaria and his wife now have three children.

Resettling and establishing a family — finally — after years of living in limbo has introduced some stability into the lives of Rohingya refugees like Zakaria.

"Now I can think about my children's future," he said.

The stability that come with resettlement and citizenship have prompted a shift in mindset among the Rohingya population, said Laura Toffenetti, a former Chicago public school teacher who now works at the center full-time.

“When you’re a refugee, you tend to think about day-to-day, week to week. It’s about survival,” Toffenetti said. “Now that some of them are becoming eligible for citizenship, they’re finally thinking about the future.”

The morning of his naturalization ceremony, June 25, Zakaria put on an olive-green suit and knotted his red, white and blue tie. He pinned a small gold American flag to his lapel. He was ready to become an American.

He and his family — his wife; two daughters and son; and his grandfather, Babu bil Abdul Hamid — drove to the Dirksen Federal Building, a courthouse in a downtown Chicago skyscraper.

Zakaria took his spot among 110 fellow Americans-to-be. They came from countries all over the world, including Syria, Mexico and the Philippines. A manic, excited energy ran through the room. Everyone fell silent as Judge Ruben Castillo, who presided over the day’s ceremony, walked in to greet them.

“Ladies and gentlemen, you’ve been on a long journey,” Castillo said. “And we’re now going to bring your journey to an end.”

He asked them to rise, raise their right hands and recite the oath of allegiance to the United States. Zakaria repeated the words said by tens of thousands of new Americans annually.

“I hereby declare, on oath, that I absolutely and entirely renounce and abjure all allegiance and fidelity to any foreign prince, potentate, state or sovereignty, of whom or which I have heretofore been a subject or citizen,” Zakaria repeated after Castillo. “That I will support and defend the Constitution and laws of the United States of America against all enemies, foreign and domestic …”

“I truly believe that today, you made our country stronger because you decided to become part of the United States. I firmly believe with all my heart that you shouldn't give up anything that you bring to this country, especially your ability to speak other languages and understand other cultures, and it’s critical to our future.”

“I truly believe that today, you made our country stronger because you decided to become part of the United States,” Castillo told the room. “I firmly believe with all my heart that you shouldn't give up anything that you bring to this country, especially your ability to speak other languages and understand other cultures, and it’s critical to our future.”

As the ceremony concluded, Zakaria’s eyes filled with tears. He stood up from the bench and strode out of the courtroom as a new American, his wife and children alongside him.

On the way out, he picked up a voter registration form.