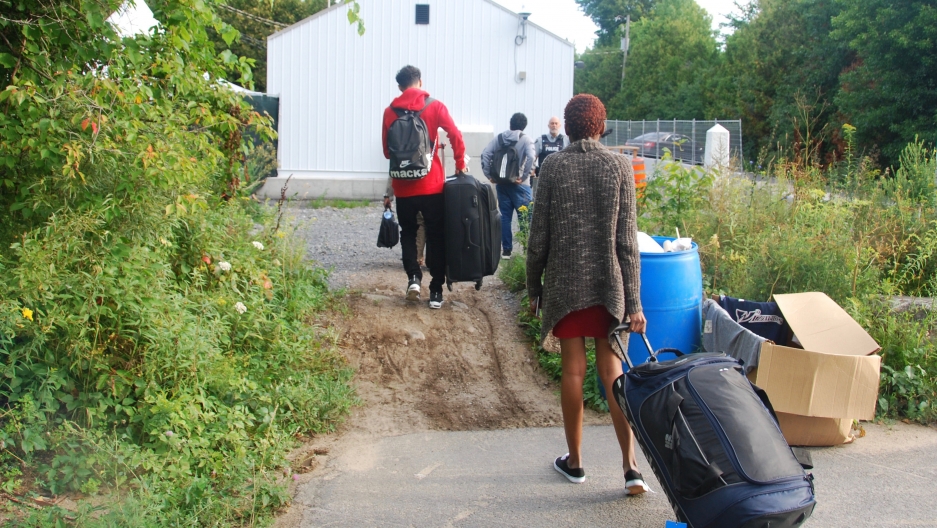 A group of people, unrelated to each other, carry their bags over a dirt path to cross the border into Canada. Canadian police wait to arrest them and process their asylum claims on the other side.

The four strangers didn't speak to each other as they unloaded their luggage from a taxi in the early morning August light at the end of a road in rural Champlain, New York.

“You speak English?” a bearded Royal Canadian Mounted Police officer a few yards away asked to nods from three men. And to the woman: “Madame, parlez-vous français?”

Then, he began to reel off a short speech he and his colleagues repeat many times a day whenever someone arrives at the dead end of Roxham Road to cross into Quebec, Canada.

“We’re police officers,” he said to them. “If you choose to enter here, you’re going to be arrested.”

After he finished his warning, each member of the group dragged their suitcases across a short dirt path — taking the same side door entrance into Canada as tens of thousands of others since 2017 — where Canadian officers then begin to process their applications for asylum.

Related: Can a 'merit-based' immigration system work in the US?

Despite the 24/7-police presence and a concrete-foundation processing facility, the crossing at Roxham Road is not an official one. But it has become a well-traveled path for people seeking to request asylum in Canada.

A 2002 agreement between the United States and Canada, called the Safe Third Country Agreement, requires most people who plan to request asylum to do so in the first of the two countries in which they arrive. The premise of the agreement is that both countries are “safe” for refugees.

If people seeking to claim asylum in Canada were to turn up at an official entry port along the border, they would, with few exceptions, be immediately sent back to the United States. But, in what is often referred to as a “loophole” in the agreement, asylum-seekers who make it to Canadian soil between official entry points — including at Roxham Road — can make a claim. 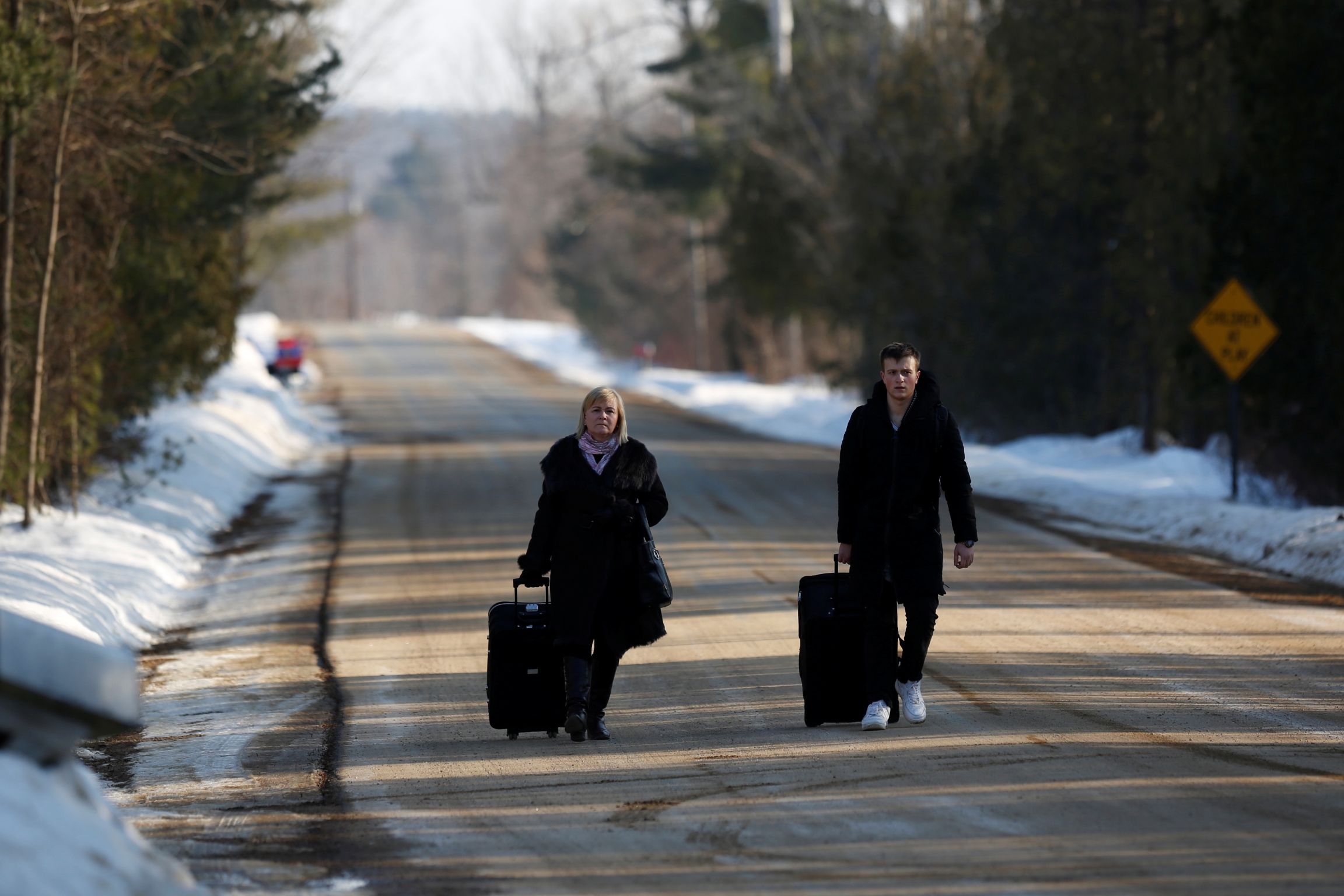 People walk with their luggage on Roxham Road before crossing the US-Canada border into Canada in Champlain, New York, Feb. 14, 2018.

A little more than a year ago, Mohammad Amin Sadiqi, originally from Afghanistan, stood on Roxham Road and listened to a Canadian police officer give a similar warning given to all who cross there.

With the arrival of ISIS in his home country of Afghanistan, civilians had been targeted for their ethnic and religious affiliations. Sadiqi, a member of the ethnic Hazara group, who are Shia in Sunni-majority Afghanistan, didn’t feel safe going to any gatherings or restaurants, afraid he might be attacked. Fearful for his children’s future, he decided to leave to begin the process of seeking asylum. 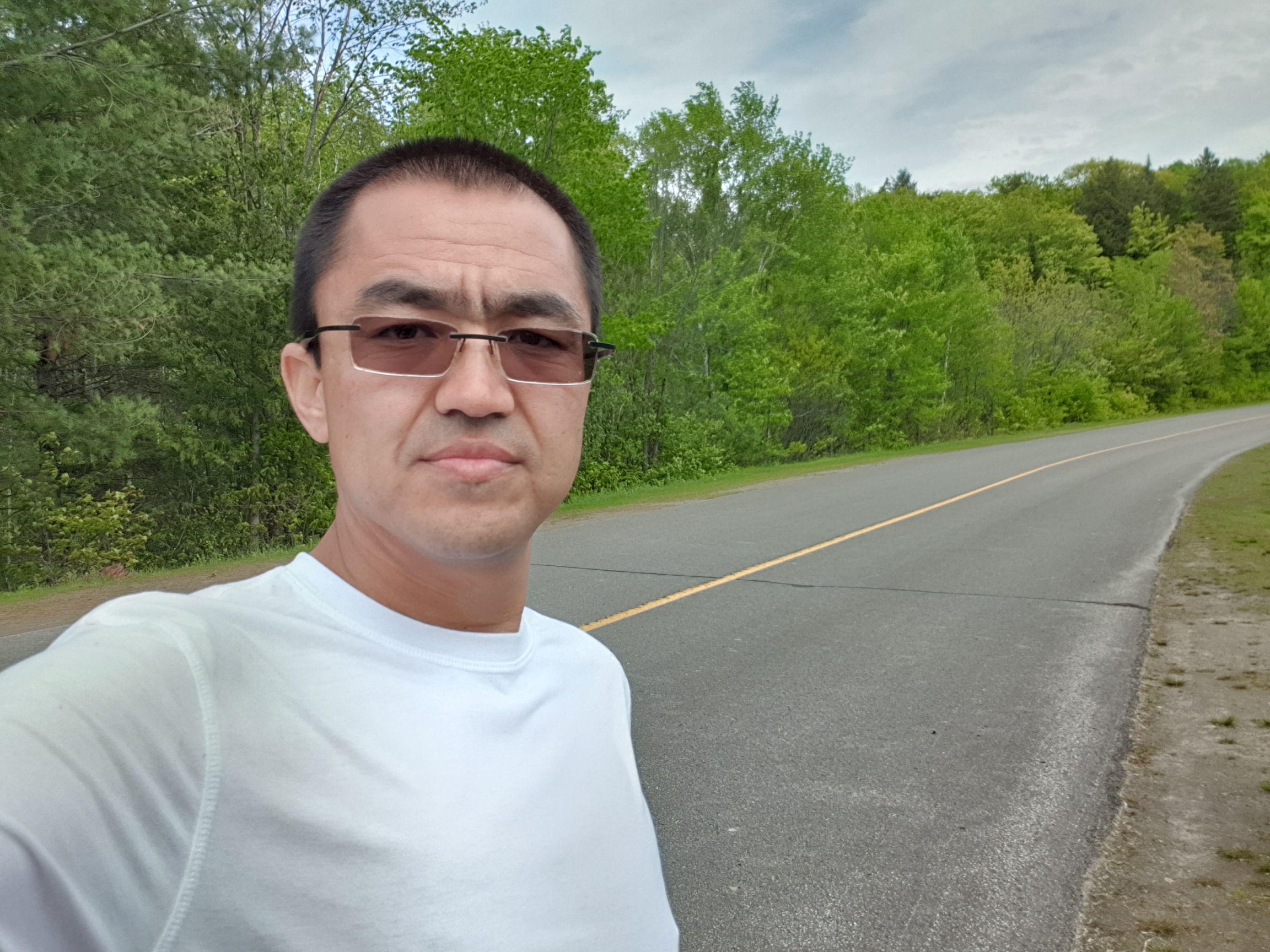 Though Sadiqi held a valid visa to the United States because of previous work with New York University, he did not feel comfortable going there amid the Trump administration’s rhetoric and immigration policies, especially as a Muslim, Sadiqi said. So, last July, he flew to New York, took a bus upstate to the city of Plattsburgh, and shared a 20-minute taxi to Roxham Road.

Sadiqi remembers the officer’s warning before he crossed. There is a “stigma” associated with irregular entry and he was not trying to sneak into Canada, he said. But the situation in his home country left him with a “forced choice.”

“Personally, I never planned to be in Canada in this way. We were targeted, but just for the fear of my life, the life of my children, I had to make a decision.”

“Personally, I never planned to be in Canada in this way,” Sadiqi said. “We were targeted, but just for the fear of my life, the life of my children, I had to make a decision.”

The Roxham Road route started gaining notoriety after the election of US President Donald Trump, and since then, the demographics of those who travel through the area to claim asylum in Canada have changed, due to shifting US political developments concerning immigration, said Colin Read, mayor of Plattsburgh, the largest city near Roxham Road on the US side of the border. Early on in Trump's presidency, many Haitians traveled north, prompted by the Trump administration’s move to withdraw their temporary protected status. People of other nationalities have since followed.

Related: For some Iranian families separated by the travel ban, this border library offers brief moments of reunion 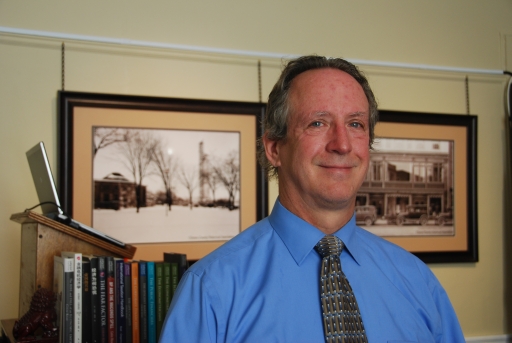 Sitting in his office in August, Read, who previously worked with a local volunteer group that formed to support migrants, said he was not surprised that people continue to come through the area to reach Canada.

Many people, some who have lived in the United States for a long time, are driven by “fear of the unknown” of what will happen next with immigration policy, he said.

Since 2017, more than 40,000 people have irregularly crossed into Canada from the US. Though rates declined somewhat last year and through the winter, recent statistics show an uptick; last month, there were 1,835 asylum claims in Quebec — up nearly 300 from the previous month — from people who entered the country between official entry points.

According to Read, though few people in Plattsburgh likely know the Safe Third Country Agreement by name, the region does feel its impacts — particularly when it’s not working well.

“What we really need to do is unify our immigration policy between the two countries. Because if there's any difference in the way we approach immigration or refugee status, then you're going to have people trying to arbitrage.”

“What we really need to do is unify our immigration policy between the two countries,” Read said. “Because if there's any difference in the way we approach immigration or refugee status, then you're going to have people trying to arbitrage.”

Craig Damian Smith, associate director of the Global Migration Lab at the University of Toronto, has been interviewing people who have recently arrived in Canada to seek asylum. While some, like Sadiqi, travel through the US as a transit country, others have lived in the United States for years. He’s interviewed Deferred Action for Childhood Arrivals (DACA) recipients and has spoken with some who, after years of trying to get status in the United States, were rejected.

For some, the decision to go to Canada comes after a specific personal event, like a workplace raid or a decision in an immigration case, he said.

“When a [policy] catalyst happens for these people, Canada is then a viable option for them,” Smith said.

Global patterns of migration have evolved since the "third country" agreement was put into effect in 2004, according to Bipartisan Policy Center’s Theresa Cardinal Brown. At that time, people requesting asylum were a fairly small group, said Brown, who served as the first Department of Homeland Security director of Canadian affairs.

Now, through social media and the internet, people are able to access more information about migration routes, and the new reality is straining the system for handling asylum claims.

“People are not willing to wait in a refugee camp somewhere. They are moving to where they can make their application and seek protection directly. ... That's impacting lots of countries and border systems that were set up to manage a different type of flow.”

“People are not willing to wait in a refugee camp somewhere. They are moving to where they can make their application and seek protection directly,” Brown said. “That's impacting lots of countries and border systems that were set up to manage a different type of flow.”

Amid the influx of border crossers, immigration has become a delicate issue for Liberal Prime Minister Justin Trudeau ahead of the October election. Conservative leaders are campaigning on tightening immigration enforcement at the border. And though Trudeau has been welcoming to many immigrants, earlier this year, his administration took some domestic steps to try to relieve the backlogged immigration system, including by cracking down on what is sometimes called “asylum-shopping" — a policy adopted earlier this year blocks people from making asylum claims if they have already done so in the US, United Kingdom, Australia or New Zealand.

Related: How Trump compares to past US presidents on immigration

Canadian leaders have also requested to renegotiate the terms of the Safe Third Country Agreement with the United States. One proposal, according to media reports, would change the agreement so that people who cross between official entry points, like at Roxham Road, would be bounced back to the US — as currently happens when asylum-seekers try to make a claim at official points.

Border Security and Organized Crime Reduction Minister Bill Blair has spoken with US leaders, including US members of Congress and Department of Homeland Security officials about the agreement, according to his office, “to strengthen the agreement to the benefit of both of our countries.” US officials did not respond to an inquiry on the status of the request. 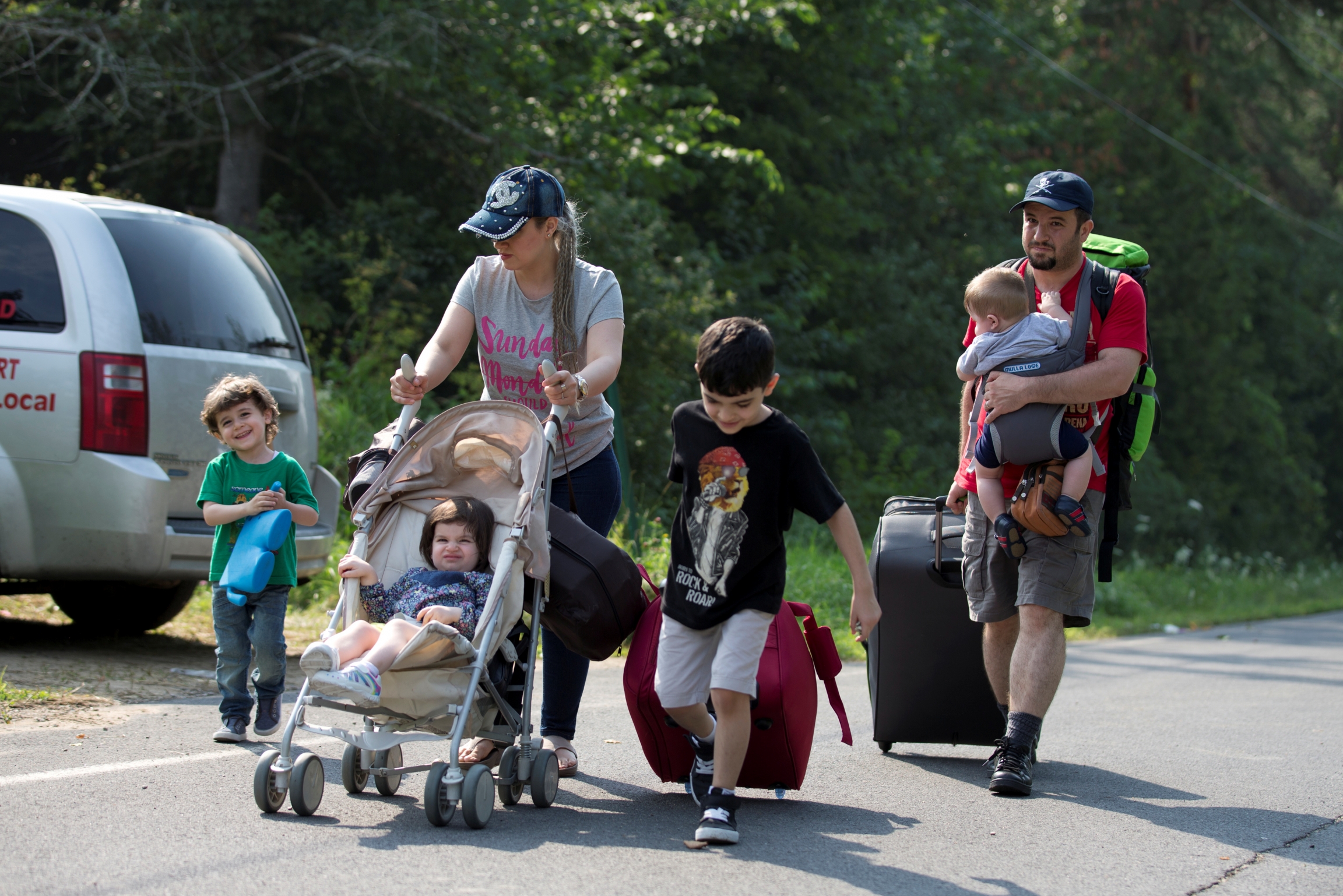 Raed Alakhras from Syria arrives on Roxham Road by taxi with his family to cross the US-Canada border into Canada from Champlain, New York, Aug. 3, 2017.

At this point, it appears unlikely that the Safe Third Country Agreement will be renegotiated.

Brown and other policy experts note that renegotiating the treaty is not a high priority for the United States, and Canada doesn’t have strong cards to play. The US is focused on immigration issues on its southern border — including trying to implement a safe third country agreement with Guatemala — and there is not much that the US would stand to gain from revisiting the agreement, she said.

Smith has doubts that the Trudeau government truly wants to renegotiate the agreement — the administration takes a softer view towards immigrants, and the request could be “posturing” ahead of the elections, he said.

Meanwhile, he said, the Safe Third Country Agreement as it currently stands has the impact of slowing migration into Canada while not shutting it off completely. The system that has emerged around Roxham Road — where people can skirt the Safe Third Country Agreement, which would turn them away at an official Canadian entry point, and apply for asylum at an unofficial entry — works in some ways, he said.

“I think that actually having this loophole keeps it manageable,” Smith said, noting the infrastructure that has been built up at Roxham Road. “People know where to go. You're not trying to sneak across in other places.”

In the year since Sadiqi entered Canada, he has started working at the Newcomers Information Center at the YMCA-YWCA in Ottawa. His asylum claim was successful, and he hopes that in a few years after he receives permanent resident status, his family can join him in Canada.

Leaving behind one’s family and home is very difficult, Sadiqi said, and not a path many would choose unless they are in fear for their life.