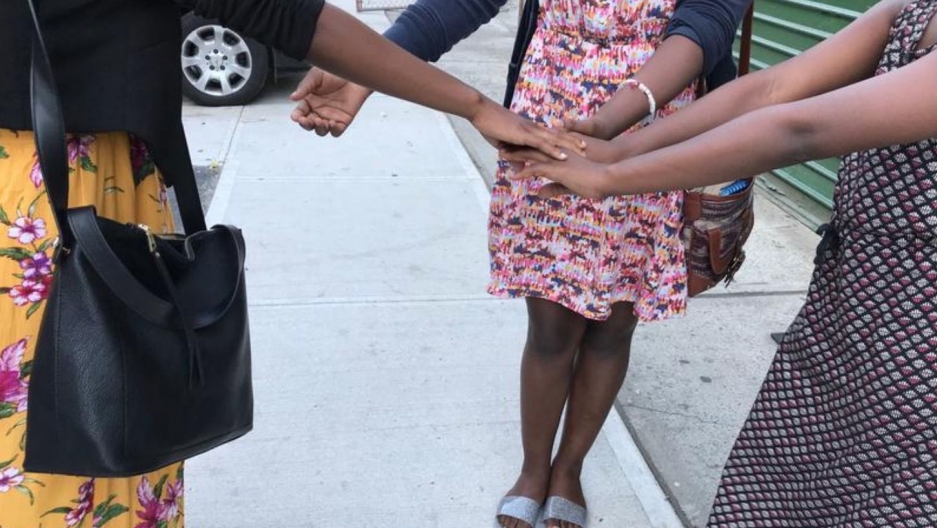 Three sisters who were separated at the US border from their father, who is HIV positive, are afraid to be identified, but wanted to tell their story.

Fourteen-year-old Andrea remembers the last time she saw her father. They had just crossed the border near El Paso, Texas, last November, together with her two younger sisters, Leiliana, 13, and Sofia, 11. Like many migrants, they were kept in one of the notoriously cold processing centers run by Customs and Border Protection known as hieleras.

“It was closed and it was very cold,” she recalled in Spanish.

The family had come from Honduras, traveling mostly by bus. They were cold, but they were still together. Until three days later, when their father was taken away. Andrea said they didn’t have time to hug each other goodbye because “it was so fast.”

The three sisters spoke to WNYC in the midtown offices of KIND, Kids in Need of Defense. It’s a nonprofit that represents children in immigration court. The girls asked us not to use their real names because they’re afraid of the government. They’re now living in East Harlem with their grandmother.

The Trump administration’s “zero tolerance” policy of separating kids from parents ended in June of 2018, after massive outrage. But Andrea and her sisters are among more than 950 kids the ACLU now claims were taken from parents after that date. A court agreement allows this if the parents are considered dangerous or have a criminal record. But Lee Gelernt, the ACLU’s lead attorney on the lawsuit, said these new cases don’t meet that standard.

“It's been traffic violations, it's been misdemeanor thefts,” he said, of the charges the parents had according to government records, either while in their home countries or during previous visits to the US.

The government will likely argue these separations were justified and in the interest of the children when the two sides appear before a federal judge in California later this month. But in the case of the three Honduran sisters, taking them from their father may have violated the government’s own policy.

Neither did WNYC. HIV is no longer considered a communicable disease that can prevent someone from entering the country, and hasn’t been since 2010. Earlier this year, WNYC reported on an HIV positive mother and daughter who were allowed into the country, though the older daughter was separated from them because of her age.

But Customs and Border Protection has been sending mixed messages about its HIV policy ever since word got out about this unusual case involving the Honduran sisters. In July, the agency’s chief of law enforcement operations, Brian Hastings, was questioned by Maryland Democrat Rep. Jamie Raskin at a House committee hearing.

“If a mother or father has HIV positive status, is that alone enough to justify separation from their child?”

“If a mother or father has HIV positive status, is that alone enough to justify separation from their child?” Raskin asked.

Hastings responded, “It is, it’s a communicable disease under the guidance.”

Days later, Customs and Border Protection corrected that statement. A spokesperson told WNYC that HIV is not considered a communicable disease that would bar entry into the US, nor is it grounds for family separation. But the agency wouldn't rule out separations completely. It said HIV presents additional considerations, citing the “potential requirement for hospitalization” and the best interest of the child.

This policy angers advocates who fought to take HIV off the list of diseases barring entry to the US.

“The language used is still pretty offensive and misunderstands people living with HIV.”

“The language used is still pretty offensive and misunderstands people living with HIV,” said Aaron Morris, executive director of Immigration Equality. “It really seems to presume that anyone living with HIV will be hospitalized, and because of that, they seem to justify separating families.”

The three sisters said their father was not hospitalized, and was healthy because he took his medicine. Thirteen-year-old Leiliana was angry when she later learned they were separated based on her dad’s HIV status.

“They told us about that argument, she said, “but I don’t know what that disease has to do with us.”

Her older sister, Andrea, piped in, “They’re supposed to help him, not to send him back to Honduras.”

In February, their father was deported back to Honduras after failing to prove he had a credible fear of returning. He claimed some police officers threatened to kill his family.

His name is José, but WNYC is withholding his full name because of his daughters’ safety concerns. He’s 50, a member of the Garifuna community (descendants of Africans and Central American Indigenous people), and now living on the Caribbean coast. He spoke about what he called the injustice he suffered.

José was at a friend’s house when WNYC called him in August. He said border officers in green uniforms saw the two bottles of medicine he was carrying when his family was taken to a CBP processing center. They asked him what the medications were and he lied at first, telling them it was for diabetes because he didn’t want them to know he had HIV. “The less people know the better,” he said.

But the drugs were tested and the truth came out. He was then taken away from his girls to the South Texas adult detention center in Pearsall run by ICE three days after they arrived at the CBP center. José acknowledged nobody told him why he was separated from his daughters, but he figured HIV was the only logical reason. “It has to be that because there’s no other reason,” he said.

A separation upheld by ICE

Even if CBP made a mistake and violated its own policy on HIV, it seems that Immigration and Customs Enforcement, the agency keeping José in detention, also believed this family separation was valid.

Bertha Zuniga, a San Antonio-based immigration attorney and former immigration judge, was hired by José’s family to consult with him in January. She knew he was HIV positive and figured he was wrongly separated from his children because of the ACLU’s class action lawsuit. But when she spoke to a male ICE officer, she said she couldn’t get anywhere.

“He very quickly told me he has a communicable disease and will not be considered for family reunification,” she recalled.

Zuniga said José, whose family hadn’t been able to find a lawyer until then, had already failed his credible fear interview — the crucial test that determines whether an immigrant can stay and seek asylum. He also couldn’t convince an immigration judge to overturn that decision. She said he was a humble man who looked thin and depressed.

José also told her he wasn't getting his medication. He explained to WNYC that he kept asking for his pills while in detention, but didn’t receive them for two months. He said he was never hospitalized, but was examined by a doctor.

We asked ICE about its HIV policies and why it upheld José’s separation and did not receive a response.

A history of loss

To José’s daughters, the family separation was incredibly painful. Their mother died of complications from HIV six years earlier. The girls are all healthy. 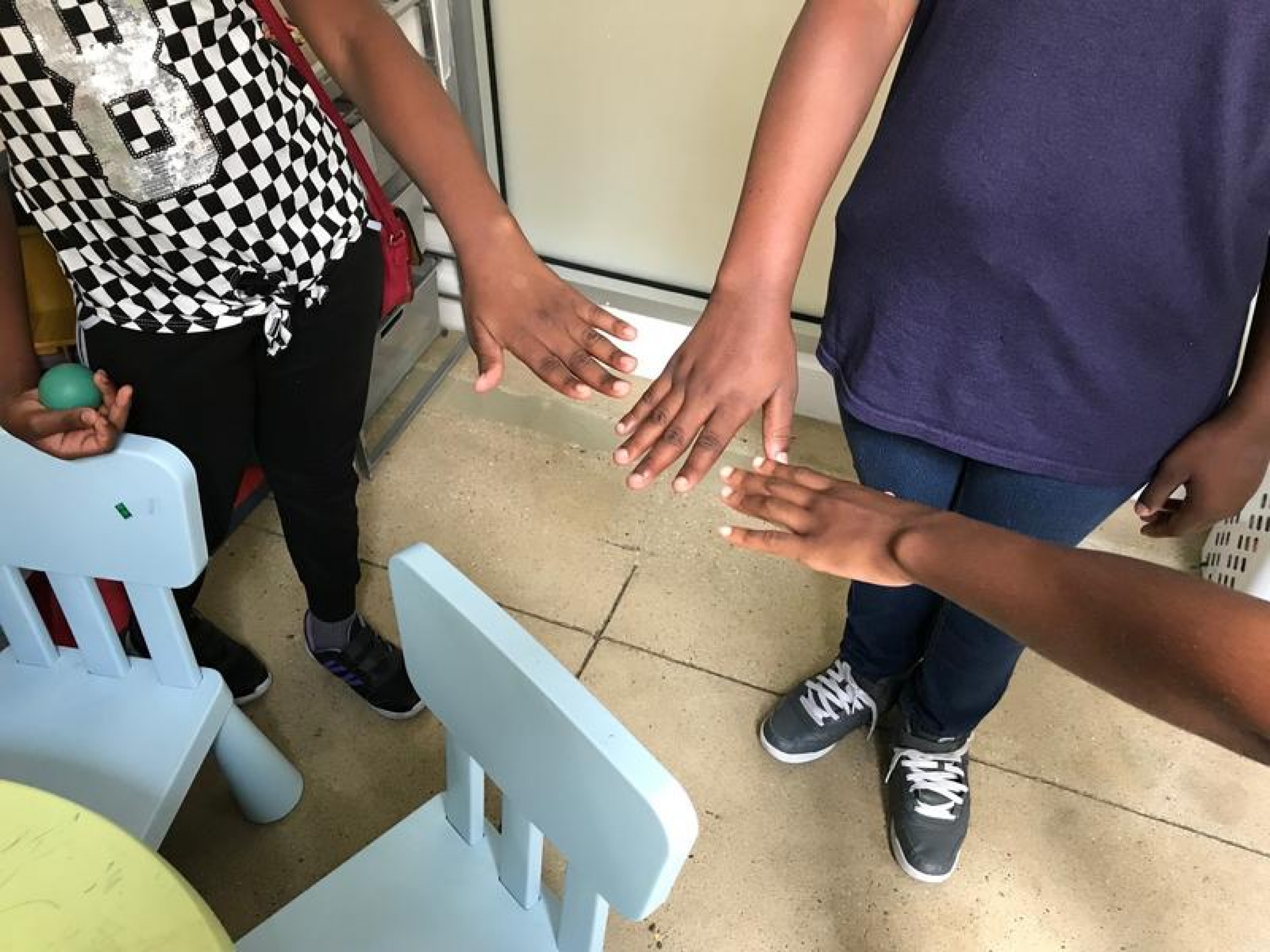 The three sisters are frequent visitors at the offices of KIND (Kids in Need of Defense), where they get legal help, therapy and art therapy.

After their father was taken away in November, they were sent to a big shelter in Texas with other children, sleeping in bunk beds. Thirteen-year-old Leiliana said they talked to their dad on the phone twice a week while he was at his detention center.

“We worried he wasn’t eating or taking his medication,” she said. The three of them stayed in the shelter for a couple of months until their grandmother in New York passed a background check by ICE. They’re now seeking green cards through the Special Immigrant Juvenile program. Their aunt in the Bronx has applied for guardianship.

The aunt declined to let us use her name, to maintain her privacy, but said she and the grandmother know the girls well because they visited them many times in Honduras over the years. “They didn’t come to strangers,” she said.

She takes them to movies and on shopping trips to give them a feeling of stability. She also brings them to a small Pentecostal church in the Bronx three times a week for bible study and services. One Sunday night in August, the three girls wore brightly colored dresses and giggled with other children and families at a chicken and rice dinner after the service. Andrea had styled her younger sisters’ hair in cornrows. The girls said they were used to going to church three times a week in Honduras, and Leiliana said she enjoys singing Christian music.

The aunt said being taken away from their father, after already losing their mother, has really affected them. Especially Andrea, the oldest.

“Sometimes she said that everything that she loves she loses,” the aunt said. “I say, 'We don’t know why things happen, only God knows.'”

José said he talks to his daughters about once a week. He wishes they could be together in New York like he planned.

Anilu Chadwick, senior attorney for Kids in Need of Defense, said her organization has represented many kids separated from their parents since last year, during and after the Trump administration's zero tolerance policy. About a third of the 950 children separated at the border since last summer wound up in New York. Chadwick said the three sisters are given individual and group therapy at KIND, as well as art classes, and that they agreed to be interviewed for a reason.

“They want to give a voice to what happened to themselves, to stop this from happening to other children,” Chadwick said.

Gelernt, the ACLU’s lead attorney in the family separation lawsuit, said it will be very difficult to bring back parents who were deported, even if they prove they were wrongly separated. He’ll try to seek compensation from the government.

“Whether we ultimately get that compensation, whether Congress ultimately creates a compensation fund remains to be seen,” he said. “But at the end of the day, I think no amount of money can really make up for the trauma these families have suffered by having their children ripped away from them. These children were traumatized. They may be irreparably harmed.”