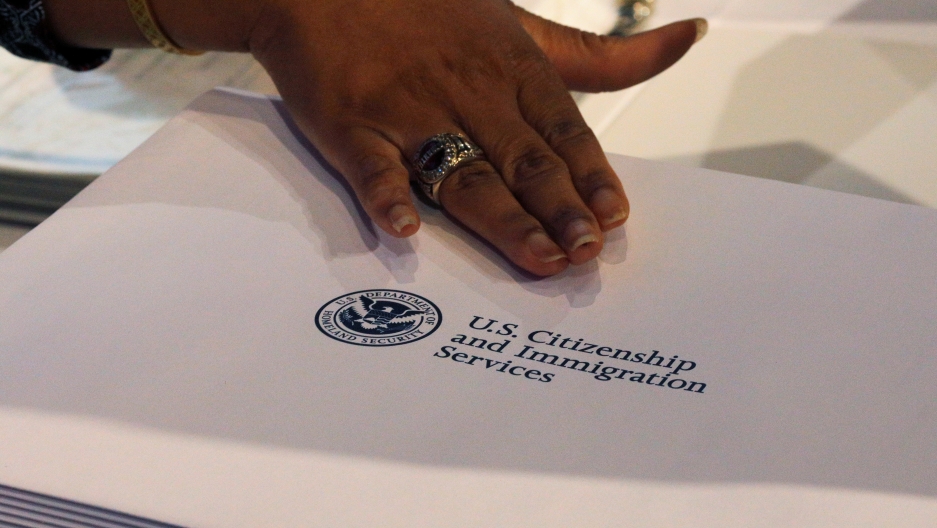 Information packs are distributed by the US Citizenship and Immigration Services following a citizenship ceremony at the John F. Kennedy Presidential Library in Boston, July 18, 2018.

Two California counties are suing the Trump Administration to block a new rule that would make it harder for immigrants to gain permanent residency in the US. Other lawsuits are expected to follow.

The new policy, called the public charge rule, could deny green cards to legal immigrants who are judged likely to use government benefits — things like food stamps and subsidized housing. But the rule isn't new.

"During the colonial era, there are many states — Massachusetts, in particular — that had poor laws that allowed for towns and localities to actually evict people who they believed were paupers or who would unduly rely on public welfare," says historian Erika Lee. "But the beginning of this story, from a federal perspective, really begins in 1882. This is the beginning of a high point in xenophobia. We've already barred Chinese immigrants about five months before, and then the 1882 Immigration Act, which is the first federal immigration law to regulate immigration in general, bars paupers or persons likely to become a public charge."

Lee, a professor at University of Minnesota and author of "America for Americans: A history of xenophobia in the US," spoke to The World's Marco Werman about the history of the public charge in the United States.

Marco Werman: Immigration officials wouldn't have known whether immigrants would be likely to become a public charge before people arrived at Ellis Island, for example?

That's what's so interesting. Because like this new proposed rule, immigration officials were given broad latitude in terms of trying to determine, "Well, who might be a public charge? What are the factors that we should be looking at?" So, on Ellis Island, for example, one of the immigration commissioners started to demand that the southern and eastern Europeans have $25 in cash on hand, plus a ticket to their final destination. And those who were arriving, many of whom were Jewish, who did not have those things, were excluded and then deported.

How has the public charge policy affected immigrant communities and communities of color?

Very unevenly. So, while this law has been on the books, this law that has banned paupers or persons likely to become a public charge. It was very unevenly applied and hardly ever enforced until the Great Depression. And we see this disparity especially amongst southern and eastern Europeans, Mexican Americans and African Americans. The fact is that southern and eastern Europeans did rely on a great range of public relief, but they were never stigmatized for doing so. So, they were granted access to programs like federal emergency relief, social security, aid to dependent children; but when Mexican immigrants, Mexican Americans, tried to rely on some of those same programs, especially during the Great Depression, they were severely penalized. And in fact, many local governments used this dependence on relief to launch one of the greatest mass expulsions of Mexican and Mexican Americans during the Great Depression.

So, clearly some troubling episodes in the history of the public charge policy. If this has been policy, though, throughout US history, what are your thoughts on the White House toughening up the public charge rule?

Another lesson from the history demonstrates that the "likely to become a public charge" clause has always been used as a cover for more racially discriminatory immigration restrictions. So, at a time when there has been no other way to restrict immigration, immigration officials have used the broad category of "likely to become a public charge" to, in effect, enact racial exclusion. And I think some of the critics that are looking at the impact that this rule might have are making a similar argument.