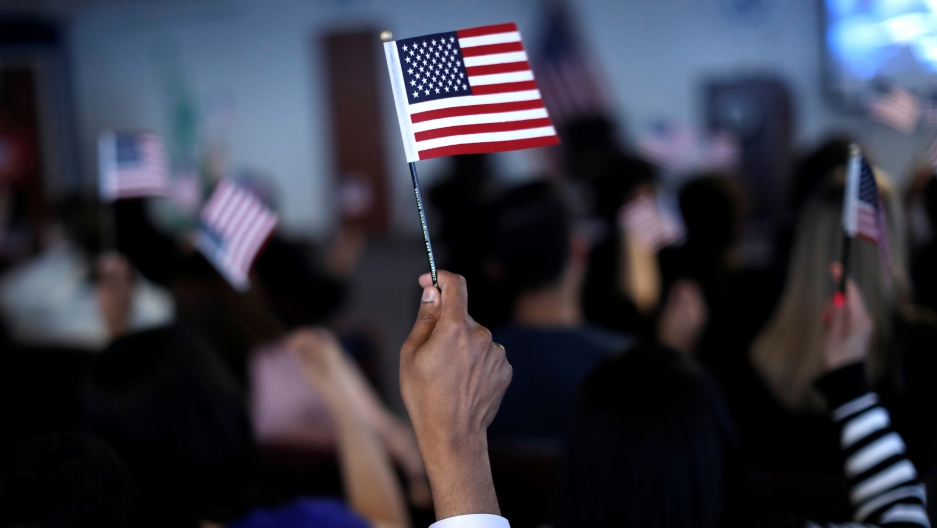 The long-anticipated "public charge rule," pushed by Trump's leading aide on immigration Stephen Miller, takes effect Oct. 15 and would reject applicants for temporary or permanent visas for failing to meet income standards or for receiving public assistance such as welfare or Medicaid.

Immediately after the rule was announced, the National Immigration Law Center said it would file a lawsuit to stop it from taking effect. The group's executive director said the rule was racially motivated.

The overhaul is part of Trump's efforts to curb both legal and illegal immigration, an issue he has made a cornerstone of his presidency.

Ken Cuccinelli, the acting director of US Citizenship and Immigration Services said at a White House media briefing announcing the rule that "the law has required foreign nationals to rely on their own capabilities and the resources of their families, sponsors and private organizations in their communities to succeed."

"However," Cuccinelli said, "Congress has never defined the term 'public charge' in the law and that term hadn't been clearly defined by regulation. That is what changes today with this rule."

The new rule defines public charge as an immigrant who receives one or more designated public benefits for more than 12 months, within any 36-month period, according to a fact sheet from USCIS. The benefits would count in the aggregate, such that a receipt of two benefits in one month would count as two months, for example, the fact sheet said. The definition of public benefits is cash aid, including Supplemental Security Income, Temporary Assistance for Needy Families, the Supplemental Nutrition Assistance Program (SNAP), most forms of Medicaid, and a variety of public housing programs, the fact sheet said.

The regulation also excludes benefits for individuals in the US armed forces, as well as their spouses and children. Cuccinelli said it would have no impact on humanitarian-based immigration programs for refugees and people seeking asylum.

The rule requires career admission officers to assess at a minimum each applicant's age, health, family status, assets, resources and financial status, and their education and skills, among other factors, Cuccinelli said at the briefing.

However, the new rule is sowing concern and confusion. According to Randy Capps with the Migration Policy Institute in Washington, DC, there could be a widening number of immigrants who won't be able to settle permanently, and legally, in the US.

"This prediction into the future they call 'totality of circumstances' is a very broad test, and it has a large number of factors in the rule, like education, does the immigrant have a high school degree, do they speak English well," says Capps. "And basically the immigration officer gets to weigh these different things to decide if that person is likely to use benefits in the future. So it's not the use of benefits that's going to exclude people, it's their possible use in the future."

Before the rule was published, MPI estimated more than half of all family-based green card applicants could be denied under the new system. Some 800,000 green cards were granted in 2016. Capps spoke with The World's Marco Werman about the "public charge rule."

Marco Werman: So what is the point of this plan?

Related: How higher ed will be a battleground for immigration debates in 2019

You know it strikes me that, from the administration's perspective, this is exactly what they want. I mean, why should people coming to this country not be admitted based on education, for example?

Well, right now education is not a qualification in immigration law as to who gets into the country. Neither is [the] English language. I mean, they're not written into the law as criteria for admission. The criteria for admission are primarily based on family connections and, in some cases, based on refugee or asylum status or having a job in the United States. If this administration, the Congress could work together to reform the immigration system and make education and English proficiency a criteria for getting into the United States, that would be fine. But they haven't done that. They're doing this in a backdoor way through a regulation instead.

Do you think this is going to be challenged in the courts and on what grounds?

It's not clear from the rule exactly how an immigration officer is supposed to weigh all of these negative and positive factors. It's just the most complex set of immigration regulations that I've seen, or one of the most complex. I mean, it's 800-some pages long. I mean, it really is kind of the worst of government. It's broad and it's vague. I think that makes it subject to discretion on the part of individual officers, that makes it subject to potential discrimination against people from certain parts of the world. So, until we know exactly what instructions the officers are going to be given on how they implement this, it's really ripe for abuse and I think that's probably where the lawsuits would be headed.

Just lay it out for us. Who will this primarily affect?

When we look at the numbers in terms of recent green card holders who would likely not have been able to get into the country because they had a negative factor on this rule, far higher numbers of people from Mexico and Central America would likely be excluded — far lower from Europe, with Africans, Asians being somewhere in between.