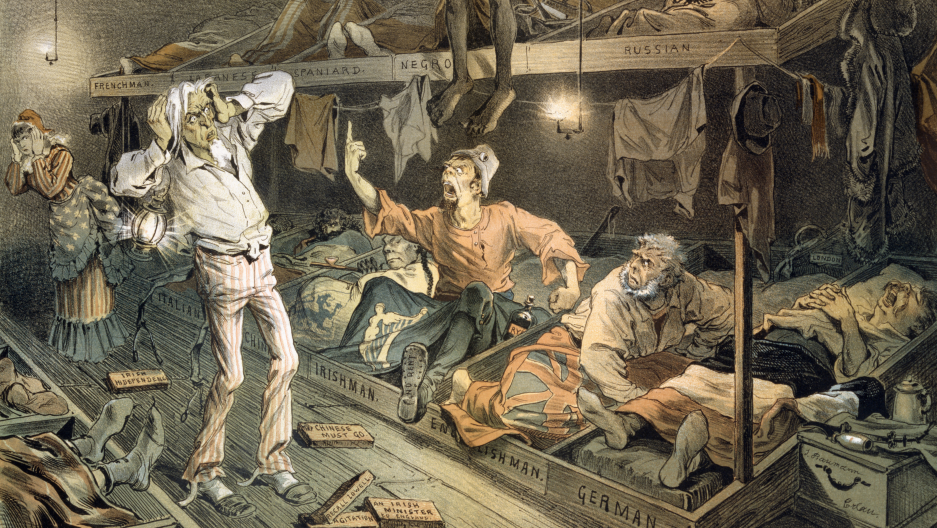 A cropped version of a print, which appeared in humor magazine Puck in 1882, shows an Irishman confronting Uncle Sam in a boarding house filled with laborers and immigrants from several countries who are trying to sleep. In the original caption, Uncle Sam says: "Look here, you, everybody else is quiet and peaceable, and you're all the time a-kicking up a row!" Nativist parties railed against newcomers to the US, calling Irish immigrants “drunkards and barbarians,” and in the Immigration Act of 1882, the federal government adopted a harsh public charge clause that was used to exclude "undesirables."

In the spring of 1855, Thomas Green was deported from Massachusetts to his native Ireland for one simple reason: He was a poor immigrant. State and local governments at the time excluded and deported immigrants based — in part — on their economic status.

In 1882, when Congress passed the first comprehensive immigration law, the federal government adopted a provision to continue deporting people like Green or exclude them from entering the country on “public charge” grounds.

Today, more than 160 years after Green was removed, the public charge rule is making headlines. In October, the Trump administration proposed revisions that would redefine existing public charge inadmissibility provisions to make it harder for low-income individuals to immigrate to the US or get permanent residency.

Current US immigration law defines a public charge as an immigrant who is likely to primarily depend on public cash assistance or government-funded, long-term institutional care. This means anyone who is likely to use these forms of assistance, as determined by the US Citizenship and Immigration Services, is not eligible for admission as an immigrant or to receive a green card.

The administration's proposed change would expand the provision to also exclude immigrants who use other government assistance programs, such as public housing, food stamps and health care.

This renewed debate about who is a public charge evokes a forgotten page in American history: The US immigration system has long excluded vulnerable individuals based on their economic status, sexual orientation and physical abilities.

Origins of the ‘public charge’ rule

The expulsion and exclusion of “undesirable” immigrants occurred well before Green and others like him were deported in the 1850s. The practice traces its roots back to the 1600s, when British colonial authorities introduced “poor laws” to the Americas, says Hidetaka Hirota, a historian and author of “Expelling the Poor: Atlantic Seaboard States and the Nineteenth-Century Origins of American Immigration Policy.”

“Britain had all these sorts of laws for regulating the movements of street beggars,” Hirota said. “Street beggars would be arrested, and paupers were sent back to their places of origin.”

After the United States gained independence, some state and municipal governments inherited the exclusionary practice of  “poor laws,” which later became known as public charge.

The implementation of the rule became more pronounced during the 19th century, when the United States began receiving large numbers of immigrants, especially Irish Catholics and other immigrants from southern and eastern Europe.

Green’s story is a prime example. After his arrival in Boston — a major port of entry and destination for many Irish immigrants — Green settled in the city, where he secured a job and married.

But things fell apart: The couple split, and Green, unable to support himself, ended up in a state almshouse, a place that sheltered immigrants and the poor in the 19th century.

Between 1845 and 1854, about 3 million immigrants arrived in the US, says Hirota, many of whom were Irish people escaping the devastating potato famine that caused the deaths of more than 1 million people in Ireland.

These massive arrivals triggered anti-immigration sentiments and eventually led to the rise of the Know-Nothing Party, which was formerly known as the American Party. Its anti-immigration and anti-Catholic sentiments punctuated its political ideologies.

Party politicians and their anti-immigration followers ostracized newcomers not only because of their income status. They called for their exclusion because, as historian and journalist Josh Zeitz writes in Politico, they deemed Irish immigrants “drunkards and barbarians” as well as “less than civilized and less than white.” 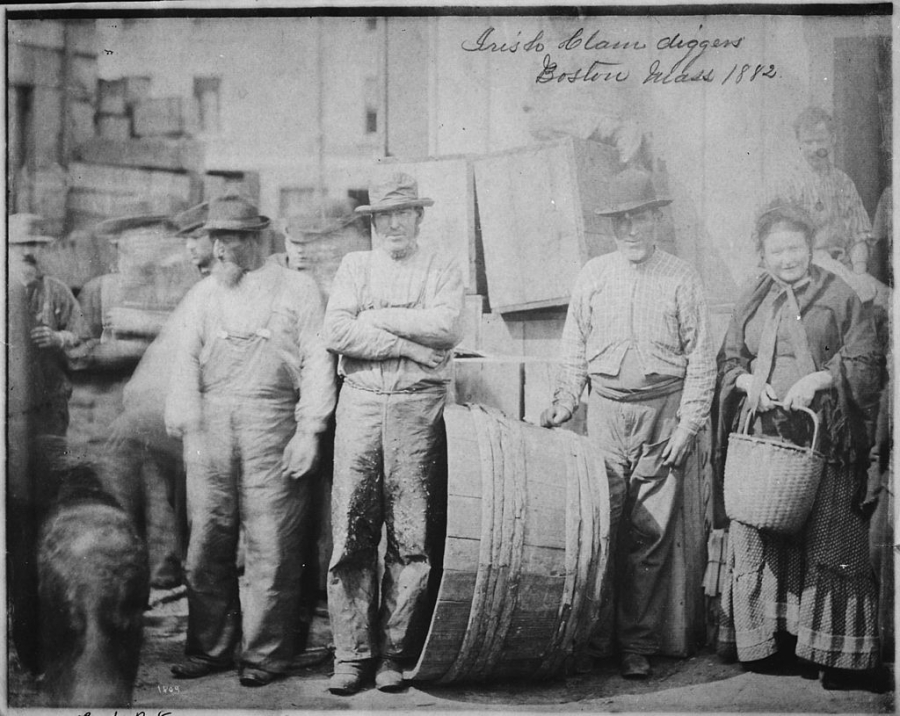 Irish clam diggers and a matronly companion are shown on a wharf in Boston, 1882. Between the 1830s and 1880s, the state of Massachusetts expelled 50,000 destitute Irish.

As a result, New York and Massachusetts tightened control over their ports of entry, closing their gates to those deemed “undesirable.” While New York denied admission to potential public charges, Massachusetts used the law to both exclude immigrants and deport permanent residents — including naturalized citizens and their US-born children — if they were unable to support themselves.

“Nativist Americans resented these poor foreigners for consuming a public welfare fund, which was supposed to be spent on Americans and the American poor,” said Hirota. “So, Massachusetts and New York excluded these people who would become public charges.”

This state-based public charge provision later inspired the US federal government to devise its own immigration control laws. In the first Immigration Act of 1882, the federal government adopted the harsh public charge clause that Massachusetts and New York inherited from the British colonial authority, writes historian Kunal Parker in his book, “Making Foreigners: Immigration and Citizenship Law in America, 1600-2000.”

The law, Parker writes, “denied entry to ‘any convict, lunatic, idiot, or any person unable to take care of himself or herself without becoming a public charge.’”

Just as it kept out the poor and those with mental and physical impairments, the federal government also used the public charge provision to exclude gay and lesbian immigrants from the US. But this exclusion wasn’t explicit until the early 1950s, when the US government started to legally bar them from entering or remaining in the country.

Prior to that, writes Princeton University professor Margot Canaday in her book, “The Straight State: Sexuality and Citizenship in Twentieth-Century America,” immigration officials used the public charge provision “to exclude or deport aliens suspected of sexual deviance.”

In 1911, writes Canaday, a public health officer screening 15-year-old Italian immigrant Francesco Spagliano at Ellis Island reported that the immigrant’s sexual organs “remain practically like those of a child, in spite of the fact that [he] is full grown. Persons so affected are liable, owing to inability to satisfactorily perform sexual congress, to become addicted to unnatural practices.”

Spagliano was blocked from entering the US because immigration officials deemed he would eventually end up becoming a public charge.

Over the past century, the public charge provision has always been central to US legal immigration control, says John Keller, executive director of the Immigrant Law Center of Minnesota.

Even in periods of immigration reform, Keller says, both the admissibility and deportability grounds of the public charge rule have remained on the books, though people have rarely been deported under the rule in recent decades.

Related: A judge said these kids get a green card. ICE says they get deported.

Today, the government considers an individual a public charge if he or she is “primarily dependent on the government for subsistence, as demonstrated by either the receipt of public cash assistance for income maintenance or institutionalization for long-term care at government expense,” according to the US Citizenship and Immigration Services.

To determine if a US resident applying for a green card is a public charge, USCIS considers, in part, employment history, income status and public benefits accessed. For those applying for admission to the US, the agency looks at whether or not the US resident sponsoring their immigration petition is able to support them financially.

Mona Tawatao, senior attorney at the Western Center on Law and Poverty in Sacramento, California, specifies “the benefits that count toward public charge are cash assistance programs like welfare, Supplemental Security Income, SSI, or if they’re in long-term institutional care, like a nursing home that’s paid for by the government.”

The Trump administration’s proposed public charge rule, however, would considerably expand the provision to any immigrant receiving help via those programs.

This expansion of the rule would affect immigrants who want to sponsor family members to come to the US, those who want to adjust their immigration status and those who want to legally enter the country, says Ana Pottratz Acosta, a professor at Mitchell Hamline School of Law.

“By changing the interpretation of public charge, the government wants to use it as a backdoor way to restrict certain categories of immigration, particularly family immigration,” said Pottratz Acosta. “That’s an easy way to achieve your policy goal without having to go through Congress and change the law.”

Used for centuries to control immigration from Ireland and other European countries, the public charge provision now primarily restricts immigration from Africa, Asia, Latin America and the Middle East.

“The public charge provision was truly central to early immigration control in America, and that still remains true today,” said Hirota, who chronicles the story of Green in his book.

This story was produced in partnership with the Immigration History Research Center at the University of Minnesota.