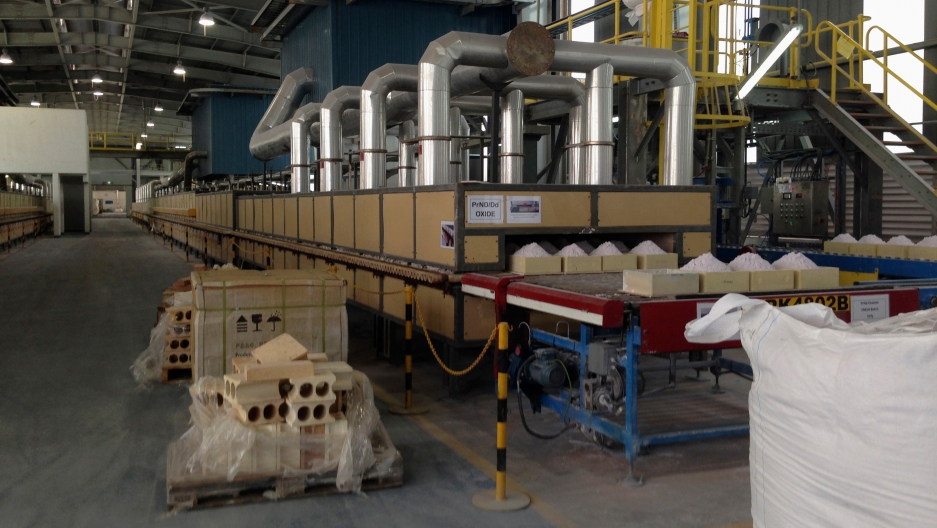 Rare-earth oxides praseodymium and neodymium are pictured in the final stage of production at Lynas' Advanced Materials Plant in Gebeng, Malaysia, July 3, 2014.

The US Department of Defense has held talks with Malawi's Mkango Resources Ltd and other rare-earth miners across the globe about their supplies of strategic minerals, part of a plan to find diversified reserves outside of China, a department official said on Wednesday.

The push comes as China threatens to curb exports to the United States of rare earths, a group of 17 minerals used in a plethora of military equipment and high-tech consumer electronics.

Although China contains only a third of the world's rare-earth reserves, it accounts for 80% of US imports of minerals because it controls nearly all of the facilities to process the material, according to US Geological Survey data.

"We are looking for any source of supply outside China. We want diversity. We don't want a single-source producer," Jason Nie, a materials engineer with the Pentagon's Defense Logistics Agency, said on the sidelines of the Argus US Specialty Metals conference in Chicago.

The DLA, which buys, stores and ships much of the Pentagon's supplies — ranging from minerals to airplane parts to zippers for uniforms — has also held talks with Burundi's Rainbow Rare Earths Ltd about future supply, as well as offered to introduce the several US rare-earth projects under development with potential financiers, Nie said.

Related: Who's paying for Trump’s tariffs? China, or American shoppers?

"We can make connections," he said.

The DLA routinely talks with potential suppliers as part of its due diligence, steps that do not necessarily result in purchase agreements. Still, the inquiries show that the Pentagon is increasingly focused on diversifying supplies of critical minerals.

As of September 2016, the most recent operational report, the DLA held stocks of many critical minerals worth $1.15 billion.

For the current 2019 fiscal year, the DLA expects to buy rare earths on the open market (up to a maximum 458 tons), lithium-ion battery precursors (0.02 tons) and tin (44 tons), among other strategic minerals, according to a government report.

Some of the equipment the Pentagon buys, including night-vision goggles and aircraft, are made using rare-earth minerals. The Pentagon has long supported efforts to require military contractors to buy domestically sourced minerals, though there are no current US rare-earth processing facilities.

China, as part of the escalating trade conflict with the United States, implied through its state-controlled media last month that it could restrict rare earth sales to the world's largest economy. Such a step would have precedence, as China in 2010 culled exports of rare earths to Japan after a diplomatic dispute.

"If you put yourself in China's shoes, this is their main weapon in the trade war," said Mark Seddon, an Argus metals analyst.

Mkango Resources is developing a rare-earths mine and processing facility in Malawi that is still several years from coming online. Rainbow Rare Earths began operating in Burundi in 2017 and has an offtake agreement with ThyssenKrupp AG.

China dominates global processing capacity for rare earths, with Australia's Lynas Corp the only non-Chinese company with any significant capacity.

Related: Despite Trump's promises, the US trade deficit with China continues to grow

"It is not a good idea to be reliant on a single major source of any material," Amanda Lacaze, chief executive of Lynas, told Reuters on the sideline of the conference. Lynas last month signed a memorandum of understanding to build a rare-earth processing facility in Texas with privately held Blue Line Corp.

Texas Mineral Resources Corp is pushing to develop the Round Top rare-earth deposit in a remote corner of the state's western edge, and Rare Element Resources Ltd is moving forward on a Wyoming project.

But those projects will take several years to come online, reflecting the reality that efforts to build rare-earth processing plants in the United States are still in the early stages.

Privately held MP Materials, which owns the Mountain Pass mine in California, aims to open a processing facility by next year.

The report includes 61 specific recommendations — including low-interest loans and a buy American provision for defense companies — to increase US rare earths supply. It also called for closer cooperation with US allies, which dovetails with DLA's outreach to miners in Africa and elsewhere.