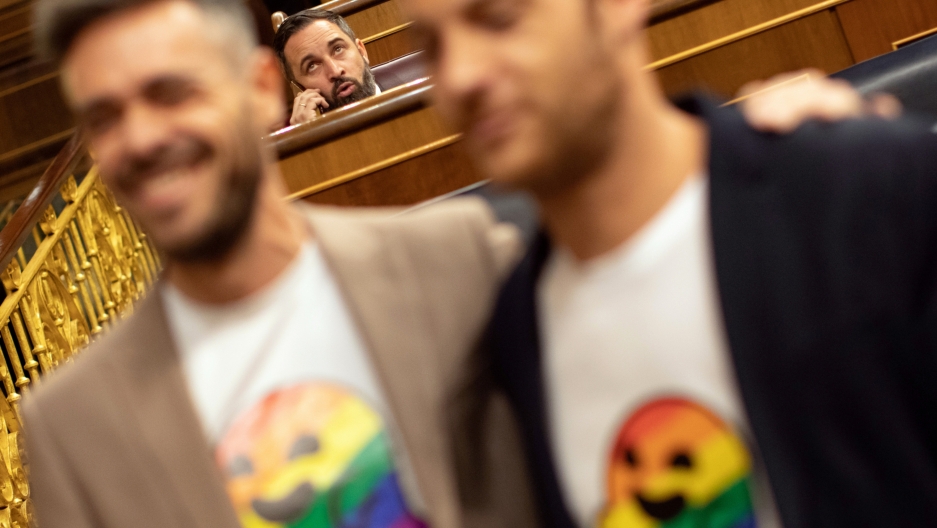 Attacks by the far-right Vox party on LGBTQ rights are testing years of political consensus on the issue in Spain, which in 2005 became only the third country in the world to allow same-sex marriage.

In the campaign for this Sunday's local, regional and EU elections, Vox has pledged to curtail gay pride parades, heaped ridicule on diversity lessons it wants to scrap in schools and has even drawn parallels between homosexuality and bestiality.

The nationalist, anti-immigration Vox won about 10 percent of the votes in a national election last month to become the first far-right party with a significant number of lawmakers since the death of dictator Francisco Franco in 1975.

It now hopes to enhance its clout in Sunday's new batch of elections, and in its hunt for votes has shifted the focus of its attacks away from Catalonia's independence drive and on to the LGBTQ community.

Since the 2005 approval of the same-sex marriage bill by the parties of the left, center-left and center-right, even the main conservative People's Party (PP), which vehemently opposed it, has changed tack, approving various bills in defense of LGBTQ rights. Some of its politicians have come out as gay and married their partners.

"Vox has broken the consensus," said Rubén López, head of the Observatory for anti-LGBTphobia in Madrid. "Those intolerant [of the LGBTQ community] had lacked a voice that would represent them. Vox is seizing those votes."

Vox leader Santiago Abascal has said it supports same-sex civil unions but not marriage, and is against LGBTQ activism even though he said it has "many gays and lesbians" in its ranks. Vox's one senator made his debut in the upper house of parliament in February by blocking a motion against homophobia in sport.

The Vox candidate for the Madrid regional leadership, Rocío Monasterio, said on Wednesday that school children as young as eight were being encouraged in class in publicly funded schools "for boys to try being girls ... and talk about zoophilia," or a sexual interest in animals.

"Certain laws of ideological nature are ... imposing gender ideology on our kids," she said.

Regional authorities said no classes of the sort described by Monasterio existed. LGBTQ rights group Arcópoli, which holds workshops at the region's schools, said its brochures and classes are aimed at preventing hatred of LGBTQ people and suppression of one's sexual orientation by schools and families.

A strong result for Vox at a regional level could place a question mark over educational programs such as Madrid's that have been run by various regions over the past few years.

The Vox candidate for the Madrid city mayorship, Javier Ortega Smith, said earlier this month he would move the Madrid Gay Pride Parade to a park in the suburbs from the center "because they cause problems and traffic jams," and make organizers pay to clean up afterwards.

Its anti-LGBTQ and anti-feminism rhetoric put Vox closer to the ruling right-wing parties in Poland than to most western European countries, such as France or Holland, where rightist populists have courted LGBTQ voters by saying they want to protect them from any threats from radical Islamists.

Whether Vox's tactic pays off remains to be seen. But some have joined the party because of it.

Vicente Robisco, the mayor of a small village, says he left People's Party for Vox. "Hearing in the news that PP supported kids studying the LGBT community at school made me take the decision right away," Robisco, 79, told Reuters when asked why he had switched parties.

But some potential voters were less impressed.

"On this, I'm a little against it because I believe that you have to respect gays, lesbians and all this, everyone has the right to be free and decide how they want to be," said Alejandra Parres, 35, who works in an investment firm, adding that the Gay Pride parade in central Madrid was good for tourism.