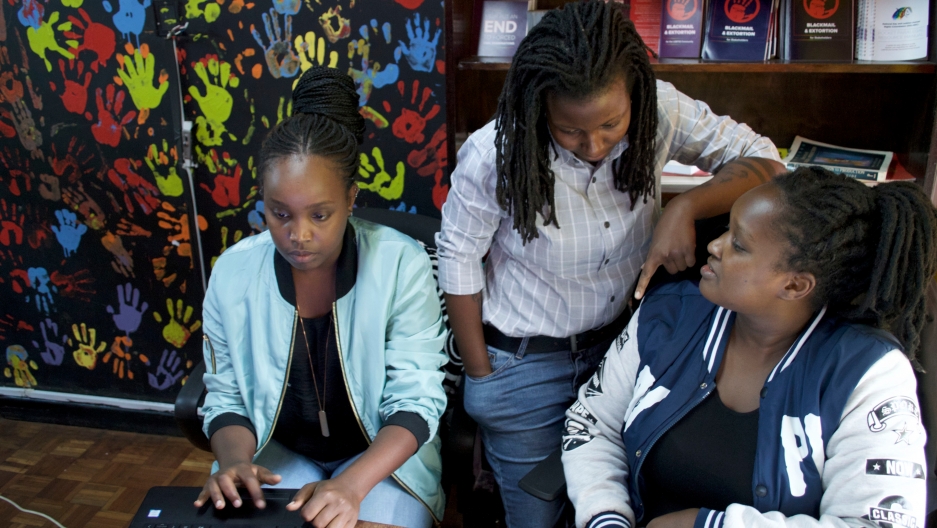 Activists at the National Gay and Lesbian Human Rights Commission office in Nairobi on Wednesday, May 22, 2019. NGLHRC is leading the landmark petition to decriminalize gay sex.

Editor's note: On Friday, May 24, Kenya's High Court ruled to dismiss a petition to scrap sections 162 and 165 of the country's penal code that criminalizes gay sex. They judged that the penal code did not violate the constitutional rights of LGBTQ persons, and that ruling in favor of the petition might open the door to same-sex marriage.

In a large outdoor music venue in Nairobi, Kenya, young couples held hands as they walked by stalls selling body positive jewelry and handmade soaps. Hip music blared in the background, and the smell of french fries wafted through the air.

May 17 was a typical Friday night out in Nairobi, Kenya. Only for once, most of the crowd was queer.

Nearly one hundred members of Nairobi’s LGBTQ community and allies gathered for a live taping of AfroQueer, a Nairobi-based podcast that tells the stories of queer Africans.

The day was one of celebration, scheduled to commemorate the International Day Against Homophobia, Biphobia, and Transpophia — affectionately called IDAHOBIT.

But the air was also filled with anticipation, as people discussed the potentially historic court decision that will be decided later this week.

On Friday, May 24, Kenya’s High Court will rule on whether the country’s colonial-era penal code — which criminalize "unnatural offenses" in sections 162 and 165— are unconstitutional. The laws make same-sex activities punishable with up to 14 years in prison.

The looming court decision added extra weight to the theme of the AfroQueer’s podcast episode, “Coming Out,” which for many queer people provokes mixed emotions of fear, anxiety and wariness.

But even admitting to being gay in private is hard to do in Kenya, let alone Africa — where stigma against LGBTQ people is high and violent retribution remains a persistent threat to those who come out in the open.

The worsening government crackdowns on LGBTQ persons in neighboring Tanzania and Uganda has brought hundreds of gay refugees to Kenya, where many of them suffer the same stigmas.

Marylize Biubwa, a queer woman activist from Nairobi, thinks about her own coming out after hearing the episode.

The 28-year-old activist is the youngest of six children in a Christian family. She is known by her friends and relatives to be outspoken, proud and fearless.

But Marylize kept her realization to herself, until last year, when she finally told her mother.

“[My mother] offered to get me counseling, or to pray for me at church. ... She even took out the Bible.”

“She offered to get me counseling, or to pray for me at church,” Marylize said. “She even took out the Bible.” 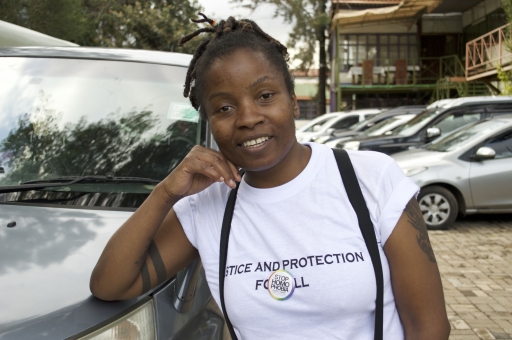 Queer human rights activist Marylize Biubwa prepares to moderate a panel about gay rights in Kenya as part of a celebration. She is celebrating her first year being openly gay.

Marylize says one of her older sisters told her to leave the house and not return until she became like a “normal person.”

Days later, she was homeless on the streets of Nairobi, depressed and suicidal.

She said she couldn’t have survived without her friends, who gave her money to find a new apartment once she revealed her situation. She also owes her strength to the queer community, which formed a new sort of family for her.

In recent years, that community has been strengthening, building legal resources to advocate on behalf of members and protect gay Kenyans, who can face extortion, evictions and sometimes violence if they come out or are outed as being gay.

“More and more queer people are coming out and mobilizing. Showing up,” said Imani Kimiri, a lawyer who oversees safety and security at the National Gay and Lesbian Human Rights Commission, the organization leading the petition in the decriminalization case.

They filed the case in April 2016, and organizations like NGLHRC have been the driving force behind a series of strategic legislation aimed at gradually increasing the rights and protections of the gay community.

Kimiri says the legislation is having a visible impact on the queer community, and that she hasn’t heard of a single examination violation since the court ruled in their favor.

“The confidence is building up from these cases, and all other work being done by other organizations. ... It’s giving queer people the right to claim spaces unapologetically.”

“The confidence is building up from these cases, and all other work being done by other organizations,” Kimiri said.

It’s a stark difference from only a decade ago when the idea of challenging a penal code that outlawed homosexuality was only a dream.

But as gay people in Kenya slowly come out of the shadows, conservative forces are trying to push them back. 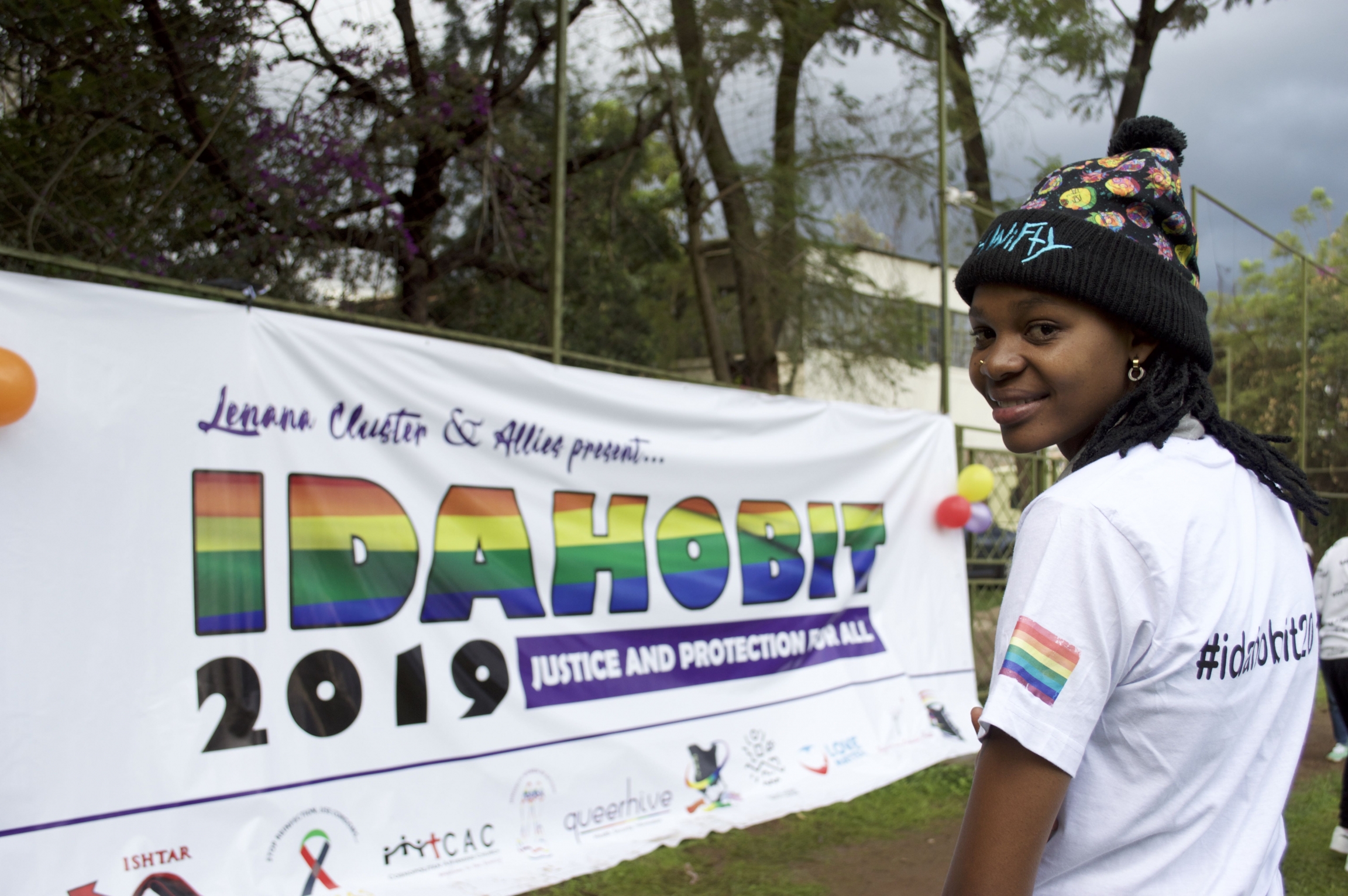 Queer activist Ray Lately at a BBQ organized to celebrate International Day Against Homophobia, Transphobia and Biphobia, May 18, 2019.

Earlier on May 17, an older crowd gathered across town at the All Saints’ Cathedral in downtown Nairobi to discuss threats to the church in Kenya.

The conference, “Imminent Threats to Church & Family: Arising to the Call of Our Time,” was organized by the Kenya Christian Professionals Forum, the main group opposing decriminalizing gay sex.

The all-day event had attracted church leaders from across denominations who collectively represent a powerful and influential voice in Kenyan society when it comes to controversial social issues like gay rights.

As if sensing the newfound confidence of Kenya’s queer community, the KCPF has put their own resources into countering NGLHRC’s actions at every turn.

During the conference, they listed Article 27 of the Kenyan constitution as one of their chief constitutional concerns. The article guarantees the right of all Kenyans freedom from discrimination and forms the basis of the Repeal 162 case that would decriminalize gay sex.

In April, KCPF chose to appeal a court decision that granted NGLHRC the right to officially register as a nonprofit organization. The case will now head to Kenya’s Supreme Court.

Beyond KCPF’s counter-legislation, however, church leaders at the conference expressed an urgent need to promote their conservative agenda in an effort to counter what they saw as negative changes to an increasingly younger, more liberal population.

“We are losing the cultural war day by day. ... We are at the cusp of possibly very radical change in our society, and we have to reflect what can we do to prepare ourselves and to resist.”

“We are losing the cultural war day by day,” Charles Kanjama told audience members. Kanjama is the vice chairperson of the KCPF and the main lawyer making arguments against the Repeal 162 case.

“Our younger generation is changing because the media is influencing them. They’re superstars in music, in theater, in film,” Kanjama said. “We are at the cusp of possibly very radical change in our society, and we have to reflect what can we do to prepare ourselves and to resist.” 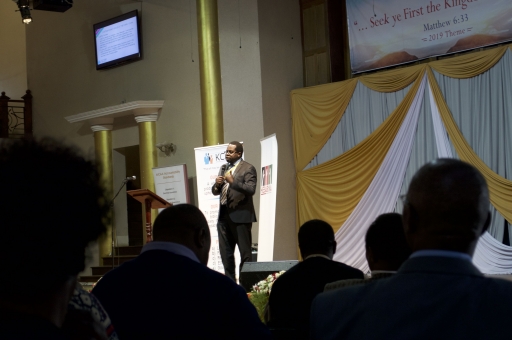 For the KCPF, that means that if they cannot change queer people, they can at least stop them from being out in public.

In September 2018, the group joined the Kenya Film Classification Board in arguing that the banned Kenyan film “Rafiki,” a love story about two young lesbians, would inflict “irreversible harm” on the public.

Openly gay Kenyans also have to contend with an often uneducated media, which in the past has used derogatory terms, fueling misconceptions about gay people.

Rading Biko, a journalist at Kenya’s Standard newspaper, admits that the ignorance of journalists about LGBTQ people is to blame. “We need more training for journalists,” Biko said.

Biko’s paper, The Standard, has published sensationalized stories about the LGBTQ community, from rumors of gay rituals performed at funerals, to arguments that the gay community is trying to spread homosexuality.

“Our journalists are actually sensationalizing these stories and at the end of the end day, they are putting the LGBTQ community at risk,” Biko acknowledged.

Biko started training Kenyan journalists about LGBTQ issues in 2014, after hearing about attacks against gay Kenyans and wondering why journalists weren’t doing enough to cover them.

He has since worked with local community radio stations from around the country to begin having conversations about LGBTQ issues. “Now we are having people come out and say, 'I want to share my story,'” Biko said.

“The younger generation — we are the one to change the narrative.”

“The younger generation — we are the one to change the narrative.”

For the LGBTQ community in Nairobi, visibility through storytelling is an important part of the struggle to counter negative and harmful stereotypes.

“We could win the battle in court, but not in the public,” said Kimiri, expressing a common belief among queer Kenyans that legislation alone will not be enough to counter homophobia in the long run.

In recent years, the community has created new platforms on and offline to document not only the struggles that the community faces, but also talk about issues like love, friendship, and health — from online blogs to WhatsApp groups. 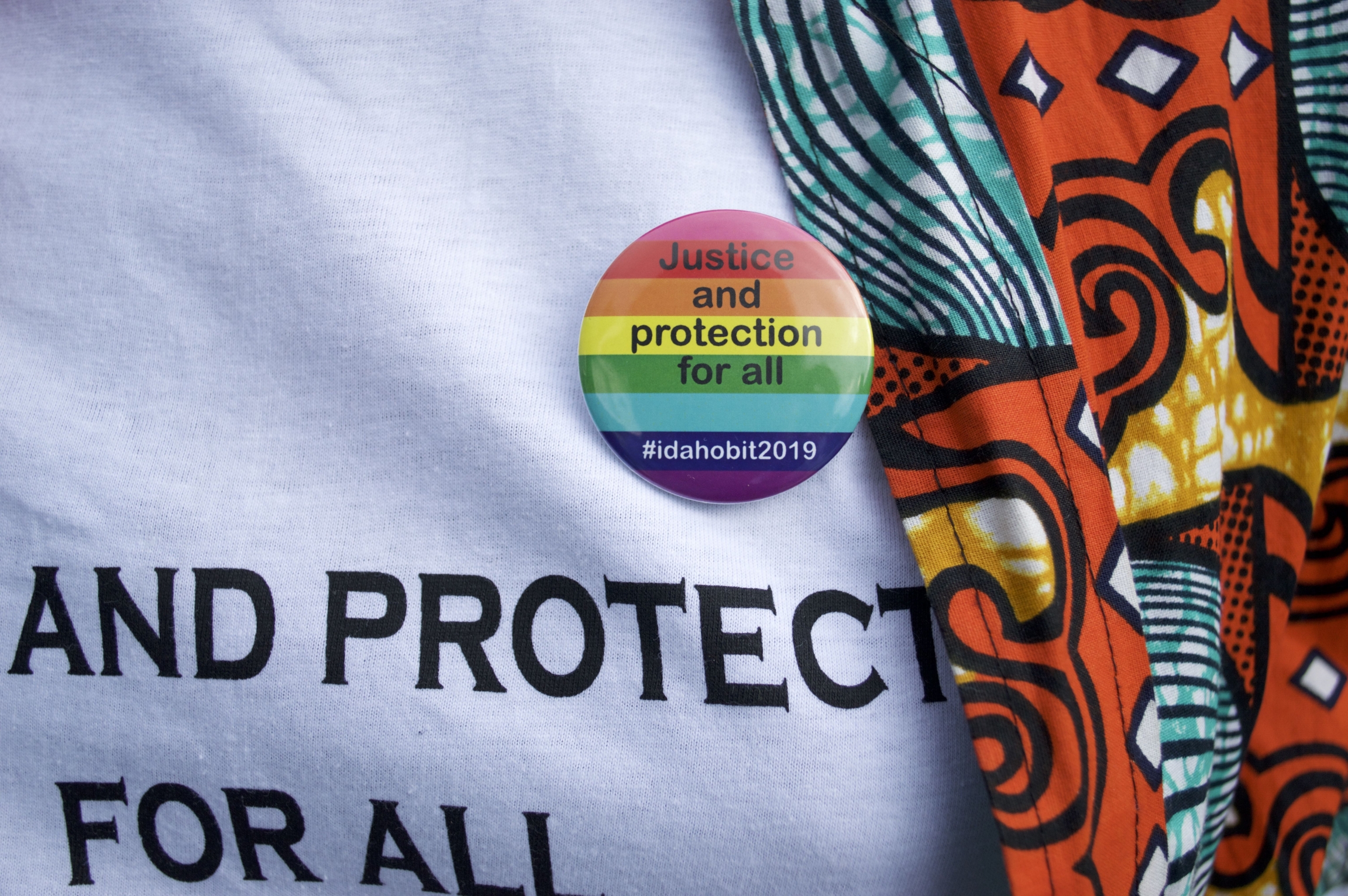 While human rights groups have achieved some victories in Kenya, gay sex remains punishable with up to 14 years in prison and anti-gay sentiments remain strong among conservative Christian groups.

The lights dimmed as the first speaker confidently took to the stage to tell his own coming out story, which ended on a positive note: His family accepts him for who he is.

Marylize hasn’t spoken with her family since she left home, but the speaker’s coming out story gave her hope that one day they could reconcile.

Still, she said she didn’t regret coming out and would never give up the newfound freedom she has to be herself.

“Some people want queer people to hide,” Marylize said. “When I show up into the room, I want people to know that I am LGBTQ.”

Despite the uphill battle for human rights and dignity, the queer community in Kenya has made one thing clear: They are not going anywhere.