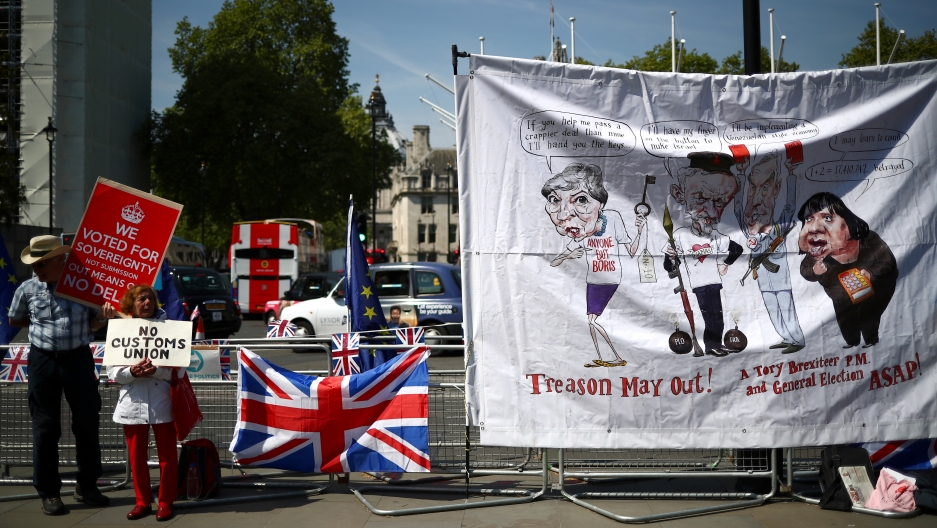 Pro-Brexit protesters demonstrate outside the Houses of Parliament in London, Britain May 15, 2019.

Brexit-supporting rebels in British Prime Minister Theresa May's Conservative Party said on Wednesday they would vote down her European Union divorce deal when she brings it back to parliament next month.

Britain had been due to leave the EU on March 29 but parliament has three times rejected the withdrawal agreement May struck with Brussels. The United Kingdom is now scheduled to leave, with or without a deal to smooth the exit, by Oct. 31.

Defeat in the vote would likely spell the end of May's divorce deal and probably her premiership.

May will bring a Withdrawal Agreement Bill (WAB), which implements the departure terms, to parliament for a vote in the week beginning June 3, Brexit Secretary Stephen Barclay said, just as US President Donald Trump begins a divisive state visit to Britain.

"It seems absurd to bring it back. It is the same thing again, again and again."

"I have talked to colleagues, some of whom voted for it last time, and they think it is dead and they will vote against it this time," Peter Bone, a Conservative lawmaker and Brexit supporter, told Talk Radio. "It seems absurd to bring it back. It is the same thing again, again and again."

May, who became prime minister in the chaos that followed the 2016 referendum in which Britons voted 52% to 48% to leave the EU, is under pressure from some of her own lawmakers to set a date for her departure.

Related: In wake of Brexit, British companies head to Amsterdam

As well as the Brexit deadlock, the Conservative Party suffered major losses in local elections this month and is trailing in opinion polls ahead of the May 23 European Parliament elections.

Asked if she would resign if the bill was defeated, May told reporters she was sure Members of Parliament would remember to respect the referendum result.

"When MPs come to look at that [bill], they will recognize that we have a duty in parliament to deliver on the result of the referendum and deliver Brexit."

"When MPs come to look at that [bill], they will recognize that we have a duty in parliament to deliver on the result of the referendum and deliver Brexit," she said.

Lawmakers from the upper house of parliament had earlier asked Barclay if this was "the last chance saloon" for May's divorce deal.

"If the House of Commons does not approve the WAB, then the Barnier deal is dead in that form," Barclay told them, referring to the EU's Brexit negotiator Michel Barnier.

Barclay said that would leave parliament with the choice of revoking the decision to leave the EU or exiting without a deal, the default position if no divorce agreement can be reached.

"If the House [of Commons] has not passed the Withdrawal Agreement Bill then there are growing voices in Europe, not least the French, who want to move on to other issues," he said. 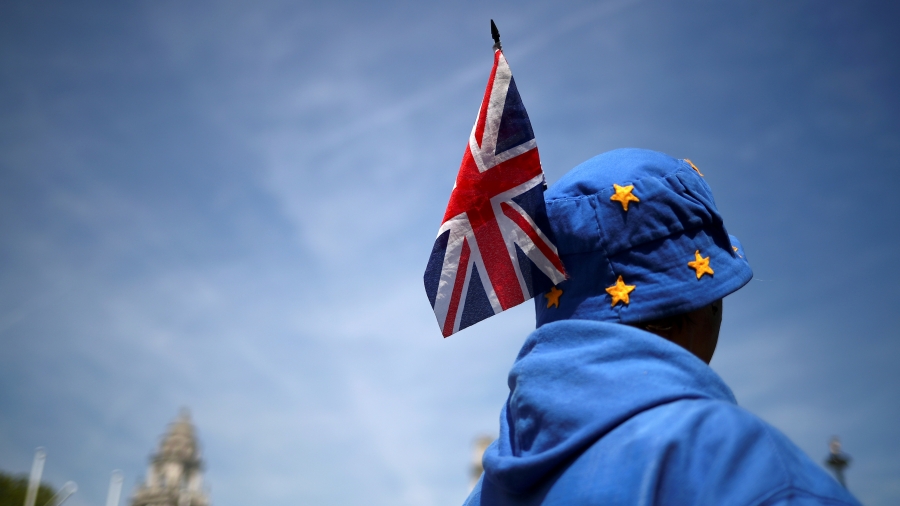 An anti-Brexit protester is pictured outside the Houses of Parliament in London, Britain May 15, 2019.

Nearly three years after the United Kingdom voted to leave the EU, politicians still disagree about when, how or even if the divorce will take place.

Brexit supporters fear May's deal will keep the United Kingdom trapped within the EU's orbit for years and that it could ultimately pull the British province of Northern Ireland toward the bloc.

Before her deal was defeated the last time, by 344 votes to 286 on March 29, May had promised to resign if it was passed. It was voted down first in January and again in mid-March.

A sticking point has been the Irish backstop, an insurance policy aimed at avoiding post-Brexit controls on the border between Northern Ireland and EU-member Ireland.

"If the prime minister brings the withdrawal bill to the Commons for a vote, the question will be 'what has changed'?" asked Nigel Dodds, parliamentary leader of the Northern Irish Democratic Unionist Party (DUP), which props up May's minority government.

"Unless she can demonstrate something new that addresses the problem of the backstop then it is highly likely her deal will go down to defeat once again," Dodds said.

A majority of members of the European Research Group, a large Brexit-supporting faction in the Conservative Party, will vote against May's deal, said Owen Paterson, a former minister.

As positions harden in parliament, with many wanting to either leave the EU without a deal or to stop Brexit altogether, May has turned to the opposition Labour Party, led by veteran socialist Jeremy Corbyn, to negotiate a way out of the impasse.

But after more than four weeks of talks, the two party leaders appear no closer to agreeing a common position, with Labour saying May had not shifted her position and warning a future Conservative leader could rip up any deal they struck.

"We have serious concerns about negotiating with a government that is in the process of disintegration and what has been said about what might happen if a new Tory [Conservative] leadership is in charge," a Labour spokesman said.

However, the spokesman said while the party could not back May's deal as it stood, he did not rule out abstaining in the vote, which might allow it to muster enough support to pass.