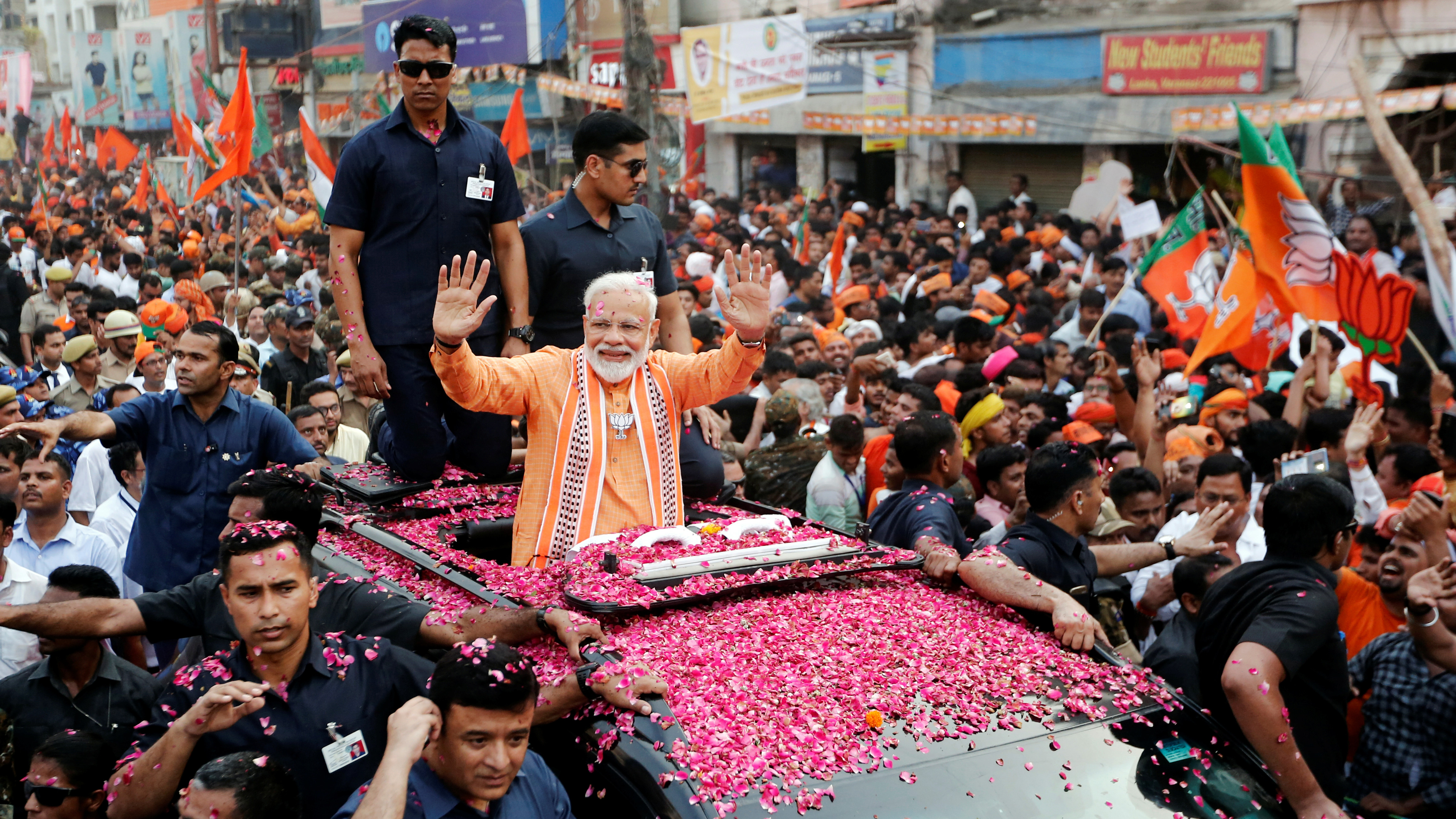 India's Prime Minister Narendra Modi waves towards his supporters during a roadshow in Varanasi, India, April 25, 2019.

Prime Minister Narendra Modi staged a show of strength on Thursday in the city of Varanasi, one of the most sacred places for India's majority Hindu population, as the country's 39-day staggered general election neared its mid-point.

Dotted with ancient temples and sitting on the banks of the Ganges River, Varanasi was one of two seats that Modi fought and won at the last election in 2014. He has so far chosen to represent Varanasi in parliament and is not likely to pursue any other seat.

Surrounded by tens of thousands of supporters, Modi, who is seeking a second term as premier, bowed to the crowd with folded hands from an elevated podium.

He then toured the city in an SUV, standing to greet supporters through the sunroof. His security forces prevented the crowd from getting too close even as the vehicle moved slowly through the narrow alleys.

Modi was accompanied by senior BJP leaders, including the party President Amit Shah and Yogi Adityanath, the chief minister of Uttar Pradesh, where Varanasi is located. The northern state is India's most populous and has the largest number of MPs. In 2014, the BJP won 71 seats there out of 80.

Modi is expected to file his nomination papers on Friday.

India's election is being held over 39 days from April 11 to May 19, with votes due to be counted on May 23. Varanasi will vote on the last day.

Modi's supporters talked up his achievements in bringing clean water, sanitation and electricity to more of India.

"The city has become clean. There is electricity 24 hours now, and there is water," said Shyam Narayan Naik, 55.

"No other party will be able to win here," Narayan, who runs a textile shop, added in the city that was mostly shut on Thursday as Modi's 5 kilometer-long roadshow passed by.

The city was decorated with BJP flags and saffron-colored balloons. Sounds of drums and songs praising Modi grew louder as the prime minister arrived.

Supporters wore "Namo Again" t-shirts or masks with Modi's photograph, while others dressed as Hindu gods and goddesses. 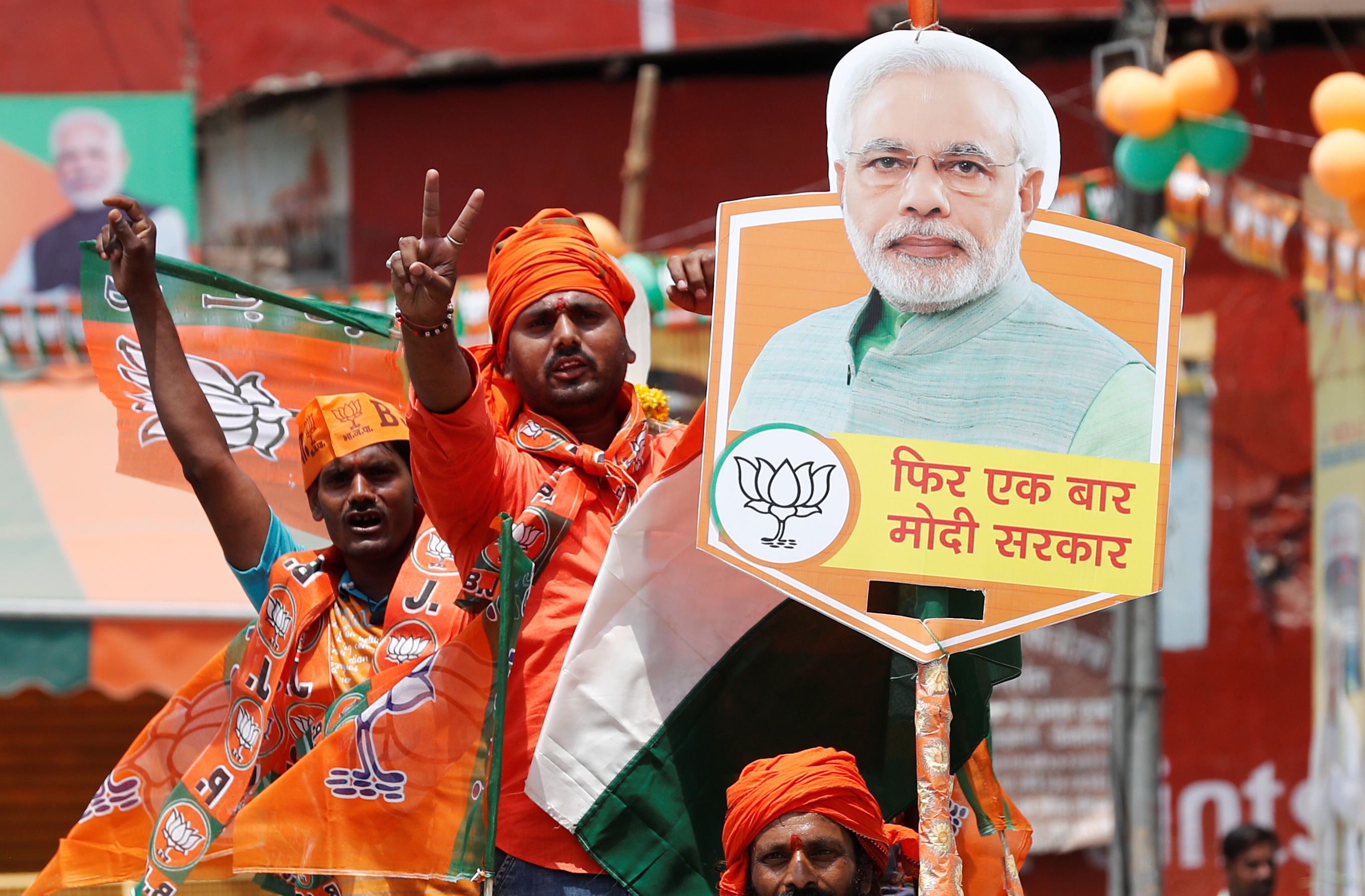 "I think this time he's trying to send the signal that he's now far more confident, he doesn't need the Gujarat seat and therefore he's standing only from UP," said Sudha Pai, referring to the other seat Modi won and gave up in 2014. Pai, a former political science professor at New Delhi's Jawaharlal Nehru University, closely tracks politics in Uttar Pradesh.

But weak jobs growth, distressed farm incomes because of low crop prices, and charges of economic mismanagement have boosted the opposition. And in Uttar Pradesh, two formidable regional parties have allied to take on the BJP.

Modi often refers to "Mother Ganga" in his speeches, and his government has committed nearly $3 billion of funds to a five-year clean-up of the heavily polluted sacred river.

That program is due to be completed in 2020.

But last year, Reuters found that only a tenth of the funds had been used in the first two years of the project.

"It is what it was before. Nothing has changed. People are just using Modi to make money themselves," said 70-year old Ramji, referring to the money spent on cleaning the Ganges.

At the end of his roadshow, Modi went to an ornately decorated riverside, where many priests prayed, burned incense, chanted, and tolled bells. He stood inches away from the water, made offerings including flowers, and prayed before leaving amid loud chants.