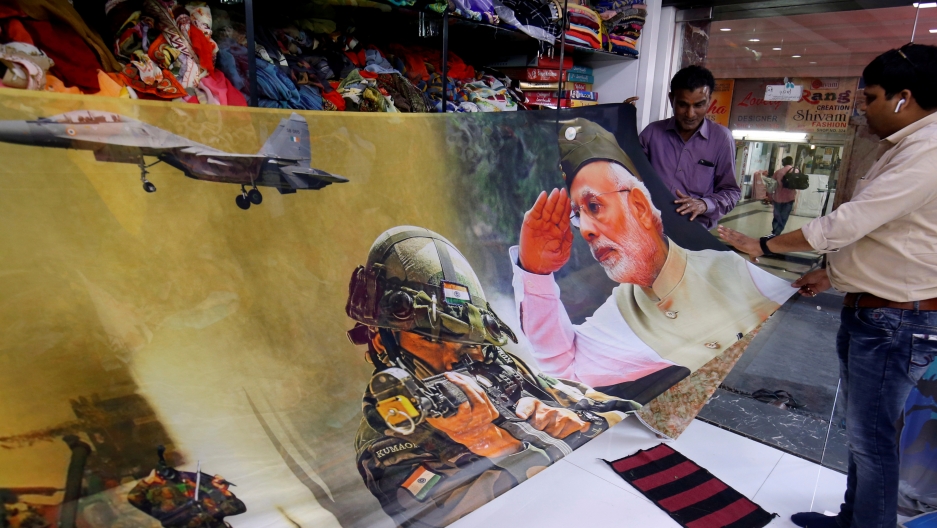 Traders display a sari, a traditional clothing worn by women, with printed images of Indian Prime Minister Narendra Modi and the Indian Army inside their shop in Surat, India, March 8, 2019.

The suicide bomber, 20-year-old Adil Dar, was a local rebel who joined Jaish-e-Mohammed, a Pakistan-based Islamist militant group that officially claimed responsibility for the attack. India vowed the perpetrators would pay a “very heavy price.”

In the aftermath of Pulwama, a spike in fake news surged alongside the ratcheting up of pugnacious anti-Muslim sentiment as right-wing mobs meted out retribution against Kashmiri students and businesses all over the country.

Meanwhile, jingoism permeated across the spectrum in India, from politicians to the media, cricket to Bollywood; all were unified in denunciation. The nation’s collective ire had been directed upon Kashmiri Muslims.

As India’s elections loom — they're scheduled for April 11-May 19 — the timing of the Pulwama attacks has added to the volatility of the Indo-Pak relationship, further exposing the region’s fault lines. Indian Prime Minister Narendra Modi, of the Bharatiya Janata Party party, has taken a strong-armed approach, emphasizing national security as a boon on the campaign trail.

“India uses exceptional violence as well as nationalist propaganda around Kashmir and presents it as a Pakistan-sponsored Islamist problem and the media in the country is mostly complicit with it."

“India uses exceptional violence as well as nationalist propaganda around Kashmir and presents it as a Pakistan-sponsored Islamist problem and the media in the country is mostly complicit with it,” says Nitasha Kaul, a Kashmiri novelist and academic, who is an associate professor of politics and international relations at the University of Westminster in London.

Kashmir has been a disputed territory following the partition of India and Pakistan into independent states in 1947. Since then, three of the four Indo-Pakistani wars have been fought over this ideological slab of Himalayan real estate.

Despite international accounts of ongoing human rights violations, the Indian government has failed to recognize its decades-long occupation and suppression of Kashmiris as a root cause of extremism.

Modi, facing pressure to maintain the upper hand as he heads into elections, responded to public indignation by ordering pre-emptive “surgical strikes” on alleged terror camps in Balakot, inside Pakistani territory, on Feb. 26.

Pakistan retaliated the next day by downing two aircraft that encroached into its airspace and captured Indian Air Force pilot Abhinandan Varthaman. For a fleeting moment, tit-for-tat incursions appeared to draw New Delhi and Islamabad into a reckless bout of one-upmanship.

In a gesture of de-escalation, Pakistani Prime Minister Imran Khan offered the IAF pilot’s release on March 1, and Varthaman was hailed as a national hero. 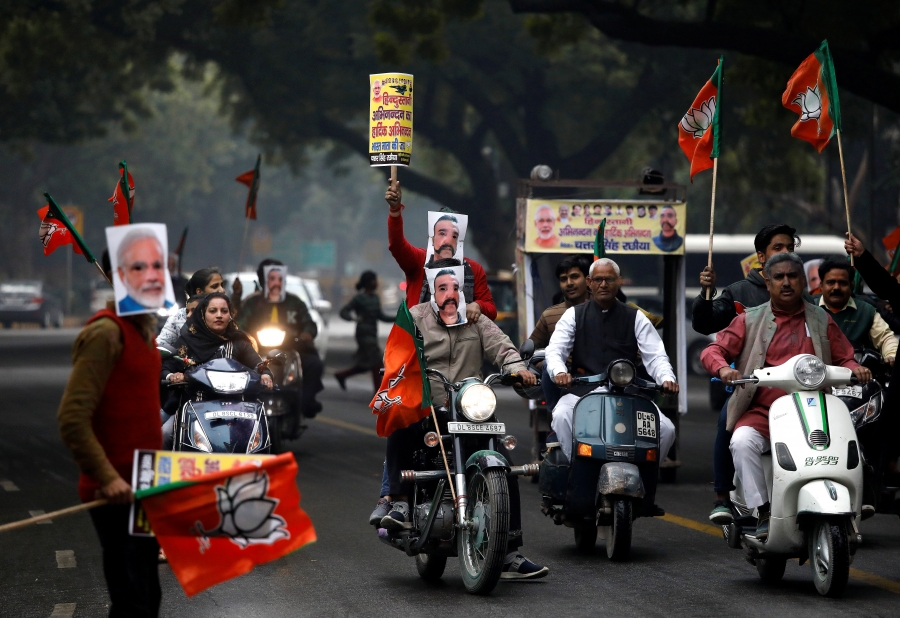 Post-Pulwama, the Indian media’s discourse has routinely ignored that the Kashmiri context is one of structural violence emanating from an occupation, leaving it ripe for churning out more extremists like Adil Dar.

“Much of the Indian media’s attitude towards Kashmir can be summed up in one line: Your history gets in the way of my national interest.”

When it comes to reporting the conflict, the international media have “bought into the idea that this is an intractable territorial conflict between India and Pakistan and so long as the prospect of war between the nuclear-armed neighbors recedes, their focus on the suffering of Kashmiris seems largely nonexistent,” Kaul says.

The issue is that both India and Pakistan see Kashmir as an integral part of their national identities, which results in a “classic case of the forgetting of tremendous and long-enduring human suffering and of privileging of territorial statist narratives," according to Kaul.

This has led to Kashmir being distilled through purely a nationalist lens. “Much of the Indian media’s attitude towards Kashmir can be summed up in one line: Your history gets in the way of my national interest," Indian Kashmiri novelist Mirza Waheed told The World.

Roots of the Kashmiri conflict

In 1972, the present demarcated border between Indian- and Pakistani-controlled Kashmir was designated as the Line of Control, or LoC.

Even with the rise of Hindu nationalism since Modi came to power in 2014, India’s secular credentials demand an embrace of the Muslim-majority state of Jammu and Kashmir, just as Pakistan’s raison d'être as a homeland for the subcontinent’s Muslims remains incomplete without it.

As a result, an estimated 70,000 Kashmiris have been killed during the conflict, as the insurgency has worn on for over two decades.

India’s policies in Kashmir may have exacerbated militancy in the region. Indian-controlled Kashmir is highly militarized, with civilians living amid checkpoints, internet shutdowns and frequent clashes between protestors and the police.

In 1990, the Kashmiri intifada, or uprising, kicked off a popular uprising for independence against the Indian government. 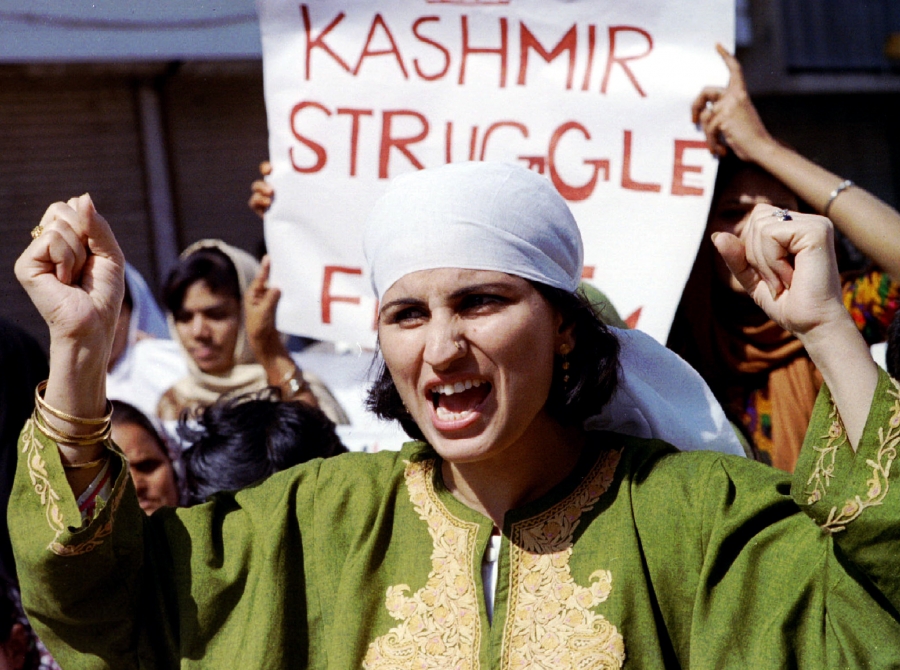 Kashmiri women in the traditional dress of Kashmir chant anti-Indian slogans at a protest rally, during a government-called general strike to back a separatist revolt in the Indian-ruled part of the disputed Himalayan region of Kashmir in the southern port city of Karachi, Feb. 5, 1995.

The imposition of the 1990 Armed Forces Special Powers Act, or AFSPA, bestowed Indian forces with broad powers to kill and arrest Kashmiris with impunity, resulting in human rights violations carried out during counterinsurgency operations, coupled with wrongful detentions without court orders under the 1978 Public Safety Act, which Amnesty International has denounced.

The period of the early 2000s did little to tackle the fundamental question of independence. New Delhi’s military occupation remained firmly embedded and infiltrated the everyday life of Kashmiris.

In the last three years alone, the Kashmiri death toll has reached over a thousand, with 2018 being the deadliest of the past decade.

Kashmir in the time of Modi

Just days before the Pulwama attack, Modi gave a speech in J&K’s capital, Srinagar, in which he pledged to “break the backbone of terror” in the state. Like previous Indian governments, the BJP’s nationalist bravado focused on Pakistani-sponsored Kashmiri separatists while deflecting from its own militarism.

Since 2014, the Modi government’s strategy of containment has intensified. The killing of Burhan Wani, a beloved Kashmiri rebel leader of the militant group Hizbul Mujahideen, sparked mass protests in 2016, as a new phase of militant insurgency erupted.

Demands for self-determination were met with force and curfews imposed by the Indian authorities. Police shot hundreds of protestors with pellets guns, leaving many blinded. Public support for rebels grew, as did their recruitment.

In response to discord and ceasefire violations, India conducted strikes along the Line of Control in a show of strength against Pakistan. By 2017, the Indian home ministry had approved a joint counterinsurgency offensive to flush out terrorism in the state.

“Modi has adopted a scorched-earth ‘Operation All Out’ policy which aims to militarily end all resistance in Kashmir, break down people’s resilience, and eliminate Kashmiri leadership. All this is happening alongside an intensifying discourse among Modi’s nationalist base that wants a demographic ‘solution’ to Kashmir.” 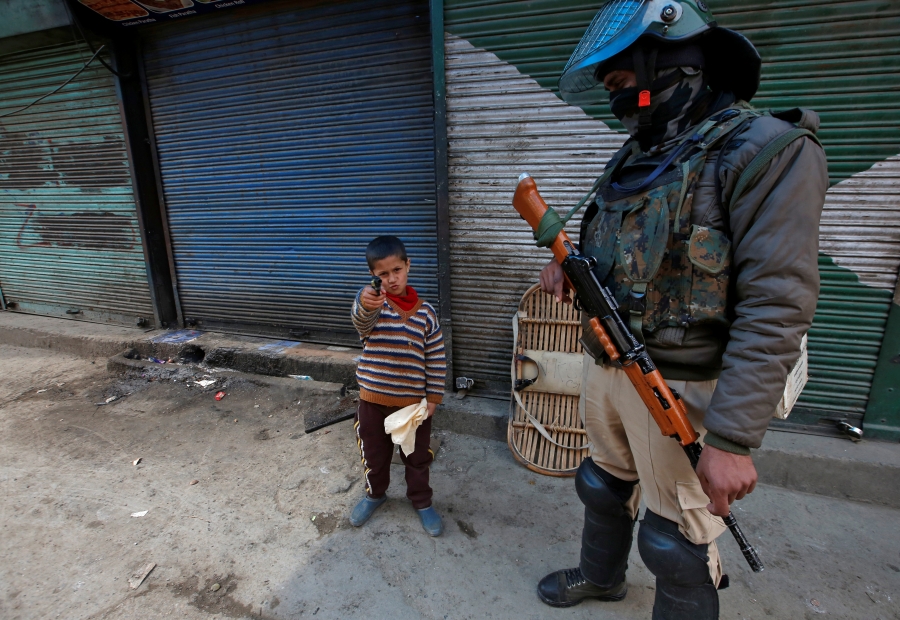 A boy plays with his toy pistol next to an Indian policeman standing guard in front of closed shops during a strike called by Kashmiri separatists against the arrest of Yasin Malik, Chairman of Jammu Kashmir Liberation Front (JKLF), a separatist party, in Srinagar, India, March 8, 2019.

Kashmiris are de-facto “invisibilized” by the Indian government, says Mohamad Junaid, assistant professor of anthropology at the Massachusetts College of Liberal Arts. The difference between previous regimes and now is that “Modi has adopted a scorched-earth ‘Operation All Out’ policy which aims to militarily end all resistance in Kashmir, break down people’s resilience and eliminate Kashmiri leadership. All this is happening alongside an intensifying discourse among Modi’s nationalist base that wants a demographic ‘solution’ to Kashmir.”

"The failure to accept the nature of the conflict and act accordingly has resulted in mutual fear and hostility between Kashmiris and the Indian government."

This approach “alienates Kashmiris further and pushes more youths to take up militancy. The failure to accept the nature of the conflict and act accordingly has resulted in mutual fear and hostility between Kashmiris and the Indian government,” says Ashok Swain, professor of peace and conflict research at Uppsala University.

“To bring normalization in the valley for a peace process to start, there is a need for the Indian authorities to seriously strive towards bringing down its self-inflicted negative emotions, prejudices and perceptual distortions,” he continues.

Ultimately, Kashmiri grievances have been dismissed by India in favor of brinksmanship with Pakistan. If history is any guide, Kashmiris will continue as pawns on the subcontinent’s geopolitical chessboard.

Without a serious reckoning with the root causes of militancy in the region, constructive dialogue to prevent future conflict will likely remain elusive.