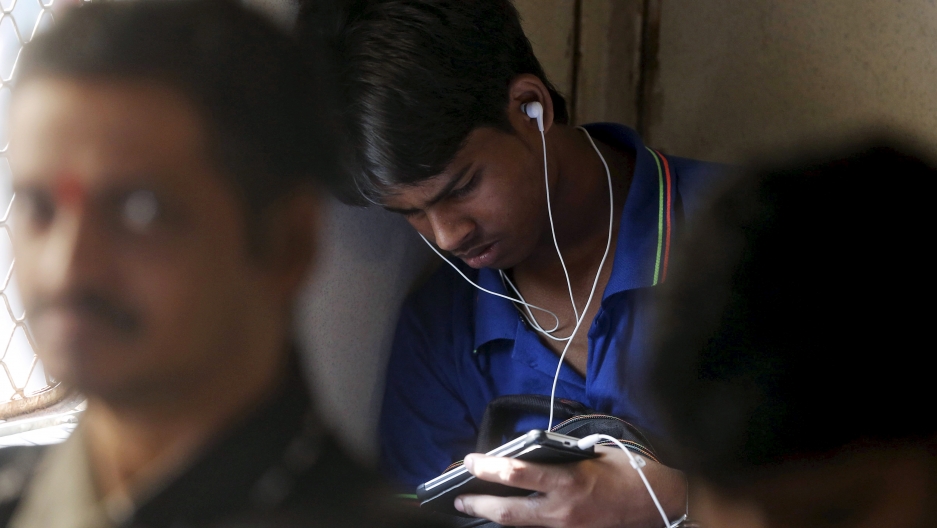 A man watches a video on his mobile phone as he commutes by a suburban train in Mumbai.

Editor's note: Checkpoint Tipline, a service launched earlier this week by WhatsApp, was originally reported as a tipline to combat fake news and misinformation during India’s elections. After Buzzfeed news reported that they attempted to file tips and received no responses, the local company partnering with WhatsApp posted an FAQ saying the tipline is primarily a research project for collecting data about misinformation, and rather than a fact-checking “helpline.”

WhatsApp on Tuesday launched a service for Indians to check the veracity of information, in the messaging platform's latest attempt to combat fake news in India ahead of national elections beginning this month.

WhatsApp said in a statement it was working with local startup Proto to classify messages sent to the service by users as true, false, misleading or disputed. They will also build a database of such content to better understand misinformation.

The move comes as WhatsApp, with over 200 million users in India, battles criticism of its platform being used for the spread of misinformation, while social media companies across the board work to prevent the phenomenon‚ particularly during sensitive events such as elections.

WhatsApp owner Facebook, Inc. said on Monday it had deleted 712 accounts and 390 pages in India and Pakistan for "inauthentic behavior," saying many were linked to India's opposition Congress party and others related to Pakistan's military.

The first phase of India's elections are scheduled to begin on April 11, with final results expected on May 23.

Rema Rajeshwari is a police chief in the southern Indian state of Telangana, where she oversees about 700 villages. She spoke with The World's Marco Werman about the fact-checking service and the upcoming elections.

Marco Werman: I want to get your initial reaction to this tipline that WhatsApp announced this week. What can you tell us about it?

Rema Rajeshwari: WhatsApp has been at the center of controversy in India since last year after fake messages spread on its platforms and sparked a number of lynching incidents. Over 40 people died and the company made it harder to forward messages and limited the number of groups to which the messages can be forwarded after it came under a lot of pressure from the government and different stakeholders. Two days ago, the company came up with this new initiative called Checkpoint Tipline. They say this is to stop the spread of suspected content ahead of India's national elections and by launching this tipline, they are saying that they are able to enable the users to point out dubious information for debunking. They have partnered with an Indian startup called Proto to create a system in which users can forward suspicious messages they have received.

Related: India is trying to market its elections as a tourist attraction.

So, it's a collaboration? A lot of organizations and people seem concerned about the fake news there.

Yeah, very much. Some are not quite happy about this step because they are criticizing it as a very feeble attempt to fight fake news. They say it's too little and too late because we barely have 10 days to go for the national elections and the amount of fake news which is already in circulation is quite enormous. We just have to wait and see in the next 10 days how fast they can get to the top.

"They say it's too little and too late because we barely have 10 days to go for the national elections and the amount of fake news which is already in circulation is quite enormous."

Have you tried using Checkpoint Tipline? What does it actually do and how does it work?

You have to send a message first. They have given this number so you can send a message to them and the response typically comes instantly by saying, "Thank you, we have received the information, we will verify the content and get back to you." They also have similar responses in four Indian languages: Hindi, Bengali, Malayalam, and Telugu. The ones who have been using the service since the last 24 hours have been complaining that it's not instant. For that, the company came up with the response saying that if it's an old rumor, the user will get a quick response, but if it's a new rumor, it will take some time for the verification center to determine if it can be verified.

What kind of fake news stories are you seeing in your district?

Whatsapp still has misleading content with regard to the candidates, with regard to the manifesto of certain political parties, and about the recent attack in the state of Kashmir. There was a terror attack a month ago. After that terror attack, there was a huge volume of misinformation being spread. If you look at the type of messages being spread these days, it's often something to do with religion and to do with the candidates, their characters, their assets, and the authenticity and the credibility of a particular candidate. This is the kind of message that we are seeing on the platform in India.

The interview was edited and condensed for clarity. Reuters contributed to this report.