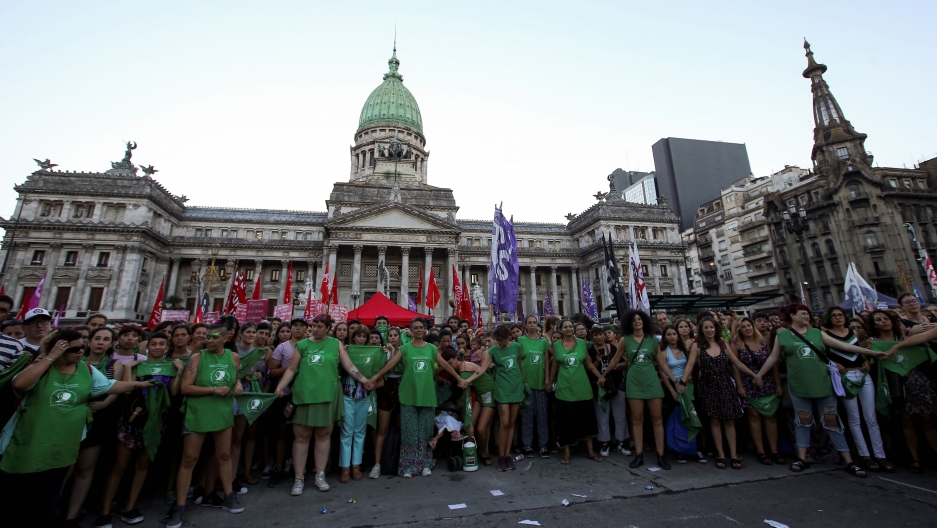 Activists hold hands outside the National Congress during a demonstration for the right to get abortions, in Buenos Aires, Argentina, Feb. 19, 2019.

The recent case of an 11-year-old girl in Argentina who was raped by her grandmother’s boyfriend was shocking enough. But when the girl, who’s referred to as Lucía, complained to a doctor of stomach pains, it turned out she was pregnant.

Lucía’s situation was covered in the media, and local news reports said she and her family wanted an abortion. She was 16 weeks pregnant at the time. And in Lucía's case, it was legal.

But several doctors reportedly refused. The provincial health secretary, Gustavo Vigliocco, maintained that the girl and her family wanted the baby.

Related: Why Argentinian activists aren’t stepping down after the Senate voted against legalizing abortion

Authorities stalled for weeks. Finally, a doctor stepped in to help. Lucía ultimately underwent a cesarean section 23 weeks into her pregnancy and gave birth (the baby died on March 8).

Lucía's case is especially disturbing, but abortion-rights advocates say it’s all too common for women in Argentina to be denied access to legal abortions. Abortion is banned here except in the case of rape, incest or if a woman's life is in danger.

On Saturday, several anti-abortion gatherings will be held in Argentina for its National Day of the Unborn Child.

Some Argentines are even celebrating that the US state of Mississippi recently approved the "Heartbeat Bill" to ban most abortions.

“The government allows them to let their religious beliefs interfere with their professional practice when they should be thinking and doing what's best for our health.”

But a movement pushing for legalizing abortion in Argentina continues to gain traction.

Andrea Liñan, an Argentine abortion-rights activist, says it starts with the fact that many doctors are untrained to do the procedure.

“So, when they are actually in the hospital and they get to a woman or a woman arrives that needs an abortion, they just don't know what to do,” Liñan said.

She says the bigger issue is that many doctors in this majority-Catholic country simply won’t perform abortions.

“The government allows them to let their religious beliefs interfere with their professional practice when they should be thinking and doing what's best for our health,” Liñan said.

Abortion has been outlawed in Argentina since 1880. In 1921, lawmakers said that exceptions can be made in the case of rape, incest or when a woman’s life is in danger.

Barbara Sutton is from Argentina and is an associate professor in women’s, gender and sexuality studies at the University at Albany State University of New York. She says the controversy over whether to allow abortion in the case of rape continued until 2012 when the Argentine Supreme Court moved to clarify the law.

More restrictive interpretations of the law said that only women with disabilities who'd been raped could receive an abortion. "...And a more expansive interpretation [said] that it applied to all cases of rape.”

Sutton says the latter interpretation prevailed in the Supreme Court in 2012, allowing abortions in all cases of rape — not just those with mental disabilities.

“You know, women encounter humiliation stigma. Unnecessary suffering and delay because you know, for example, doctors refused to perform abortions that are actually permitted by the law.”

There is a judicial hotline that women can call when a doctor refuses to comply, but it’s unclear whether it’s effective and if judges do intervene when women are denied a legal abortion. Still, the number of women seeking legal abortions is high. A 2010 Human Rights Watch report claims that around 500,000 abortions are performed in Argentina each year — it doesn't include the number of clandestine abortions. Liñan says illegal abortions are also common, even though they carry a prison term of four years.

“What happens is that the woman terminates the pregnancy by herself, like with an organization at a private clinic,” Liñan said.

That private clinic option, she says, is mostly for wealthy people. Most women who find themselves with an unwanted pregnancy can abort with pills like misoprostol and mifepristone.

In January, there was another case of a preteen rape victim in Argentina who was denied an abortion. Virginia Braga, who works at a clinic in Buenos Aires called Casa Fusa, says in both instances, the girls are from small provinces where attitudes are more conservative.

“For a woman who lives in a small town far from the capital city, it will be always very difficult for her to be helped by the judicial system. And of course, it's always worse for poor women.”

“For a woman who lives in a small town far from the capital city, it will be always very difficult for her to be helped by the judicial system. And of course, it's always worse for poor women,” she said.

She points to the number of callers — nearly 6,000 between 2016 and 2018 — to a national hotline wherein women can report sexual abuse. And she says that number is low.

“Between November 2016 and February 2018, the latest official data says that there were 3,049 victims of sexual abuse in Argentina including all adults children and teenagers. So, no, it's not surprising [to see] an incident [like] what happened to Lucía,” said Braga.

Last year, a bill to legalize abortion was narrowly voted down in the Argentine Senate. Liñan, the activist, says that defeat has energized anti-abortion lawmakers. She says they’ve adopted a new symbol and slogan.

“They started calling themselves Save Both Lives. They have these blue handkerchiefs that they use because ours, the pro-choice, is green. It has always been green. Some of them formed a political party last year also so they can run for government,” explained Liñan.

But Liñan says the Senate vote has also energized abortion rights advocates. And they’ll be working hard to elect people who support legalizing abortion, and not just in cases like Lucía's.