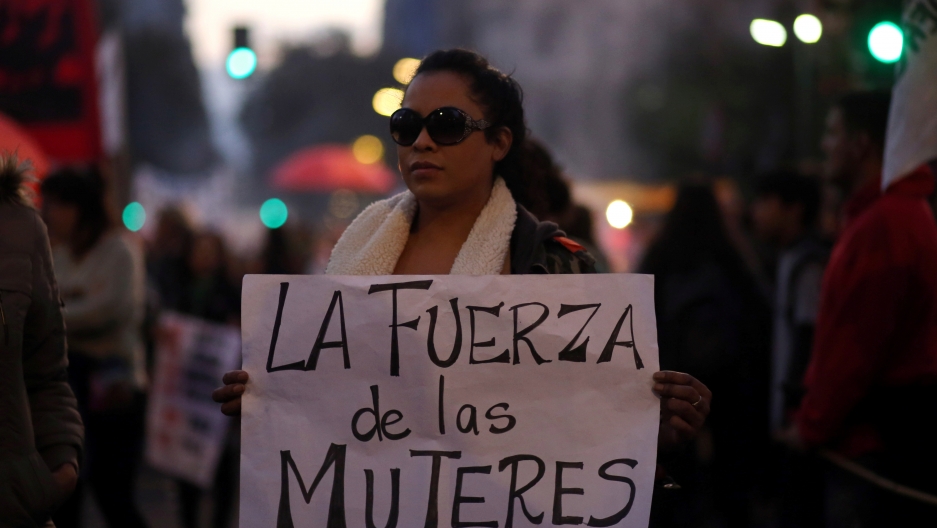 A woman holds a sign that reads, "The strength of women," during a protest against femicides and violence against women, in Buenos Aires, Argentina, June 3, 2017.

The camera is close up on Fardin’s face as she sobs. She describes being sexually assaulted when she was on tour in Nicaragua with the TV show, "Patito Feo," or, "Ugly Duckling." Her alleged attacker: popular actor Juan Darthés. He was 45 years old at the time. She was 16.

Fardin accuses Darthés of throwing her on the bed and raping her while she shouted "no." She says she was able to get away when someone knocked on the door of the hotel room.

That was nine years ago. Fardin says she tried to forget about the attack, but when she read that three other actresses had also accused Darthés of assault, she went public.

Since she posted that video in December, it’s received more than 1 million views, and it’s still circulating — with the hashtag #Miracomonosponemos, or, "Look at what you’ve done to us." That’s a turn on the phrase that Fardin says Darthes used when he forced her to touch his erection: “Look at what you do to me.”

Darthés has denied her accusations.

But it has provoked outrage in Argentina. And the reaction has become part of a broader women’s rights movement, says Sol Prieto, a feminist activist and sociologist in Buenos Aires.

“The women's movement in Argentina started with the #NiUnaMenos movement, [meaning] 'Not one less,' which was created in 2015 to combat femicide and gender violence,”  Prieto said.

#NiUnaMenos was sparked by the rape and murder of a 16-year-old girl named Lucía Pérez.

Then last summer, hundreds of thousands of women took to the streets to support legislation that would legalize abortion there. The bill failed, but the movement gained steam.

Prieto says Fardin’s accusations, and the overwhelming response to them, are starting to change the way people in Argentina talk about sexual violence.

“Argentine society is beginning to frame the problem of sexual violence as the centerpiece of patriarchal power,” Prieto said.

That patriarchal power is difficult to change, says Frances Jenner, the editor-in-chief of Argentina Reports. She has written about Fardin’s accusations.

“There is a huge culture of impunity within the justice system in Latin America and across in Argentina and Latin America. And I think that also permit societies, I think, that they do think that they can get away with it,” she explained.

In the past, Jenner says, there were rarely consequences for men accused of sexual assault.

“And there are many stories of women denouncing reporting sexual abuse and men turning around and calling them 'sluts' and calling them "liars" and opening cases for defamation because they think that they're lying," Jenner said. "They can get away with that. Whereas, now, the women's movement is strong and has such a huge backing from women, from men, from local people across the country.”

One tangible result of that growing support — legislators are now required to get training in recognizing sexual harassment. Still, Jenner says laws have their limits.

“You can't just make some new laws and change how people think about women,” she said.

In the meantime, there has been some movement in Fardin’s case

Her accusations are being investigated in Nicaragua, where the alleged attack took place.

And in Argentina, a former government aid was inspired to come forward with her own allegations of sexual assault against her former boss, a senator.

Fardin says that even if her video prompted only five women to come forward, she would be happy. But online, the number is already in the thousands. And it’s growing.