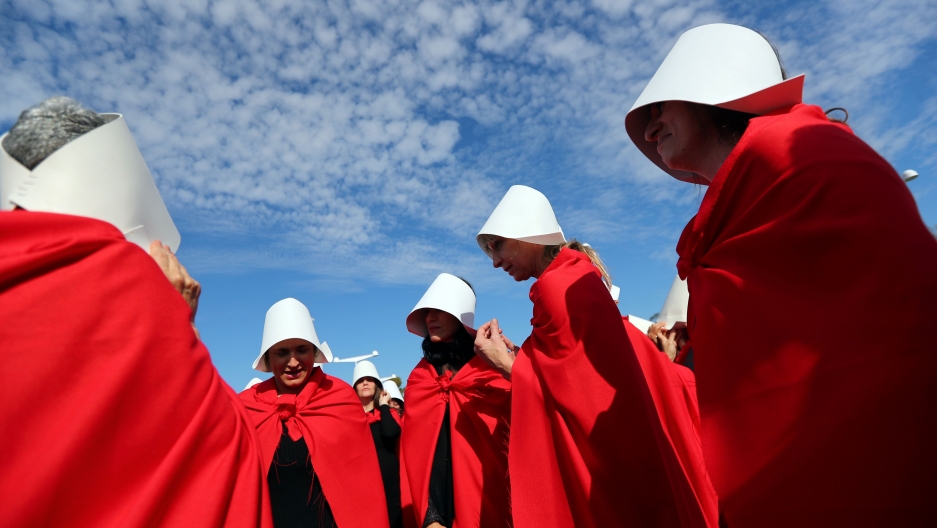 Activists dressed up as characters from "The Handmaid's Tale" take part in a demonstration in favour of legalizing abortion in Buenos Aires, Argentina, Aug. 5, 2018.

Abortion is completely legal only in three places in Latin America: Cuba legalized the practice in 1965, followed by Mexico City in 2007 and Uruguay in 2012.

Argentina, like the majority of countries in the predominantly Catholic region, bans abortion almost entirely. Since 1921, a pregnancy may be terminated only if it is the product of rape or if it endangers the woman’s life or health.

Abortion under any other circumstance can result in one to four years in prison for both the woman and the doctor who performs it.

That may soon change.

On Aug. 8, Argentina’s Senate will vote on a bill to legalize abortion. The legislation, approved by the lower Chamber of Deputies in June, has put Argentina’s powerful Catholic Church — the subject of my academic research — in an awkward but familiar position: It is morally, theologically and doctrinally opposed to a popular social reform.

Argentina’s abortion rights debate arose from the recognition that criminalizing an act doesn’t necessarily make it go away.

An estimated 350,000 to 450,000 illegal abortions occur in Argentina each year, and clandestine abortions are among the top causes of maternal death.

Roughly 300 Argentine women die from pregnancy-related reasons annually. Between 50 and 94 of those result from botched illegal abortions.

For nearly a century, the Catholic Church in Argentina has been the main obstacle to public discussion of this taboo subject.

The Catholic Church has been an important social and political force in the South American country. Seventy-seven percent of the population identifies as Catholic, 9 percent is evangelical Christian and 11 percent has no religious affiliation. Pope Francis is from Argentina.

The Argentine Catholic Church’s official stance is that abortion is murder, which aligns Argentina’s church leaders with the position espoused by the most conservative faction of the Vatican.

The church has also defended marriage as an indissoluble bond between a man and a woman, opposing the legalization of divorce in 1987 and of gay marriage in 2010. And it fought two laws that, in 2002, mandated sex education in schools and the distribution of contraception in public hospitals, even halting contraception distribution entirely in some provinces.

A groundswell of popular support for abortion

Now, due to the persistence and popularity of the Campaign for the Right to Legal, Safe and Free Abortion — which began in 2003 — Catholic officials in Argentina must decide how to respond to a women’s health issue with massive citizen support.

In April, when the Chamber of Deputies announced it would consider legalizing abortion, at least 500,000 people — mostly women and young people — rallied outside Congress in Buenos Aires, waving green bandannas, the symbol of the abortion movement. Nationwide, an estimated 1 million marched for abortion rights.

The show of support was so overwhelming that, according to sources inside the campaign, it convinced some undecided congressional representatives to vote yes in June. The abortion bill ultimately passed 129 to 125.

Now Argentina’s 72-member Senate, the more conservative of its two-chamber legislature, will get the final say. Congressional reporters say the numbers are not looking good for abortion rights supporters, but the vote is too close to call.

Abortion rights supporters hope to change their mind and are planning an even more massive pro-abortion march for Aug. 8, the day of the vote.

Related: In Paraguay, fighting for women’s rights means fighting the past

Support for decriminalizing abortion has grown exponentially among young Argentines, including among churchgoers. Many young women who identify as Catholic also insist on their right to make decisions about their sexuality and when and how to become mothers.

As a result, the Catholic Church’s public declarations on abortion rights have been remarkably moderate.

An April 20 statement from the Argentine Episcopal Conference clearly affirmed the Catholic Church’s “defense of all life.” However, it continued, “it is not our way to condemn anyone, but to enter into a reasonable dialogue about the question of life. We have done little to protect women who find themselves in this situation.”

Some within the church have taken a harder line. At Mass in April, the bishop of Argentina’s Tucuman province mentioned by name each of the province’s congressional representatives, urging them to vote against the abortion bill. On Sunday, July 8, Masses “for life” were held across the country.

But Catholicism, generally speaking, is a more diverse universe than it often appears.

In Argentina, its members includes both ferociously anti-abortion factions and groups like Catholics for the Right to Decide. Most Catholics, in Argentina as across the world, increasingly seek the autonomy to make intimate life choices.

And, increasingly, they’re finding priests — including, often, the pope himself — who hear and understand their demands.

A virulent anti-abortion movement has arisen in Argentina — but it’s not necessarily led by the Catholic Church.

Anti-abortion marchers, united under the color blue and motto “Let’s save both lives,” have protested daily nationwide since a massive demonstration on March 25, Argentina’s “Day of the Unborn Child.” They brandish a giant papier-mache fetus as the symbol of their opposition. 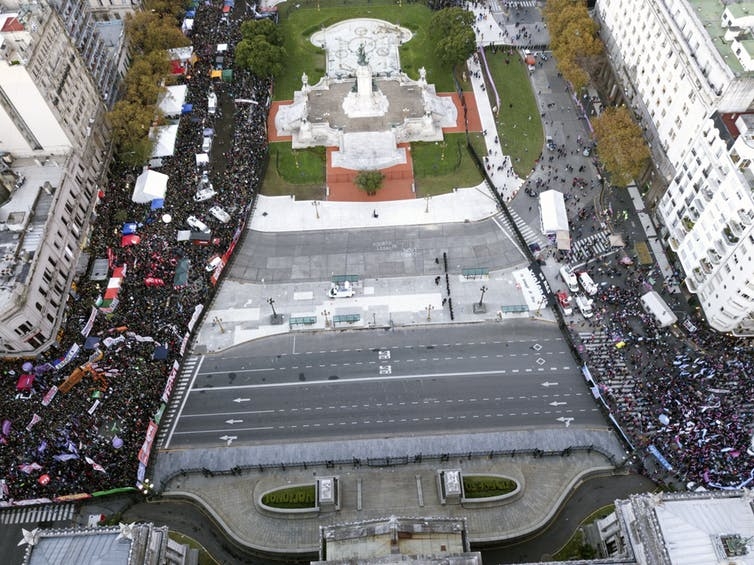 While some in the Catholic hierarchy have congratulated the “Catholics who fight for both lives,” Argentina’s evangelical churches have been a stronger force behind the mobilization.

The Church has even shied away from institutionally supporting the anti-abortion movement. It did not even endorse the big March 25 pro-life protest.

From my perspective, the Catholic Church’s strategy for Argentina’s abortion debate is similar to its approach toward other major social changes in recent years, including gay marriage and trans rights. Church officials make carefully worded public statements defending Catholic doctrine, but they give followers relative freedom to take their own stances.

For over 20 centuries, the Catholic Church has stayed relevant by adapting to a constantly evolving world. If abortion eventually becomes legal in Argentina, the Church will adapt then, too.