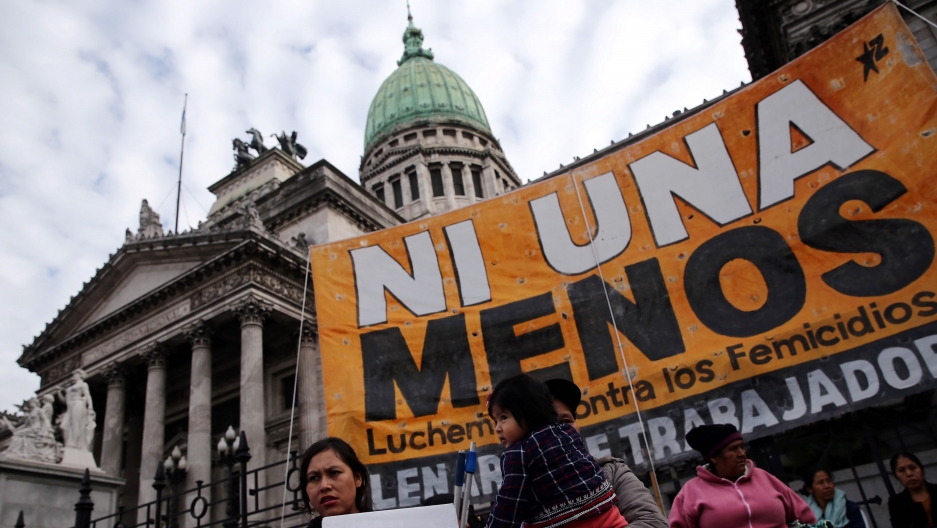 A banner that reads, "Not another [woman] less" is seen outside the Congress during a demonstration against femicides and violence against women in Buenos Aires, Argentina, June 3, 2017.

BuzzFeed's Karla Zabludovsky recently wrote an in-depth piece about the #NiUnaMenos grassroots movement to expose femicide in Argentina. Ni una menos translates to "Not one [woman] less." Zabludovsky focused especially on one tireless campaigner, Micaela García, whose murder earlier this year has shaken her fellow activists. "Like so many femicides, her death is one that could have been stopped, if only the law had been applied, if only men were properly punished for their crimes," Zabludovsky wrote.

The World spoke with Zabludovsky about how she reported the story, the obstacles she ran into along the way and the status of the movement today.

The World: What got you interested in this story? And how did you find out about Micaela García?

Karla Zabludovsky: It's very difficult not to know about the femicide problem in Argentina if you pick up any paper any day. There's always a story about a new femicide or a man who has committed one walking free. It's a very big problem. The society is trying to do something about it through #NiUnaMenos and that is what connects the story to my finding out about Micaela García.

She was a very well-known activist in her hometown, and she marched in favor of women's rights in several #NiUnaMenos marches and that's what made her such a visible victim because she was aware of the problem and she was trying to fight it.

A source from the public prosecutor's specialized unit for violence against women attributed the situation to a "reversal in politics." What does she mean by that?

There have been more femicides in 2016 than in 2015, and there were more in 2015 than there were in 2014. So, the number of femicides is growing and what this public official was referring to is [the] president ... It wasn't exactly defunding but his government made a promise to fund a women's office, and when the budget was presented it was missing the money that his administration had promised. Women's groups had complained about this. But it sent a message. It sent a message that the government does not think this issue is a priority.

Why is it that violence against women has gotten worse in Argentina?

That's a hard question. There are several theories. One theory is the femicides are getting reported more than they used to be. Although, women activists feel there is more violence in the last few years because women are getting empowered through this movement, through #NiUnaMenos, through taking to the streets and protesting against women. That has empowered them, and that's creating a reaction in men who don't want to let go of the power that they've held on to for so long over women.

What stands out most about the #NiUnaMenos movement? What are the biggest achievements?

It forced the government to make a series of laws that had been passed in 2009 but they had to sit down to figure out how to implement them. So, #NiUnaMenos forced them to do that which doesn't mean they're being implemented properly or at the pace they should be.

But I think the most significant achievement of #NiUnaMenos is that it raised awareness of this issue that had been assumed to be part of life in Latin America, which is a very machista region. It raised awareness that women do not have to put up with being catcalled on the street or being abused by their partners. It started this long overdue conversation and put certain words that are very important, in terms of this discussion, on the table, like "patriarchy" and what this means for women and what their role in society is and how they want to change it.

In the story, you talk about how the #NiUnaMenos movement is stalling. What needs to happen to ramp it back up?

How about the activists you've met. Have they lost hope?

They're not losing hope but they were very shaken by Micaela's femicide. There are just so many groups. Some of them are not doing much anymore. The organizers have moved on and doing their own thing and [are] not as invested in the movement. And there are other groups that are still working on coming up with new projects and initiatives to keep women safer. They're not losing hope but they are shaken up after Micaela's murder.

How about for yourself — how has this story affected you?

It's ironic, and it's actually not ironic. You know, when I went to Argentina to report on this story, I was harassed on the street. I was there for a few weeks, and I was harassed on the street so violently that the police had to get involved, which left me very shaken up and made me think, "How is it that I come to Argentina for a few weeks to report on this very topic, and I become a victim."

It's heartbreaking. You know you cannot walk down the street in Buenos Aires in a commercial, high-end, safe, tourist area without having to look over your shoulder, having to walk faster when you feel someone is following you. I had to duck into a restaurant and the man that had been following me ... was making signs that he wanted to beat me up. He stayed outside the restaurant until the police came. I had to call them; they took half an hour. The man stayed there the whole time just looking at me as if I was his prey. And it was very upsetting. It made me angry, and it made me powerless.