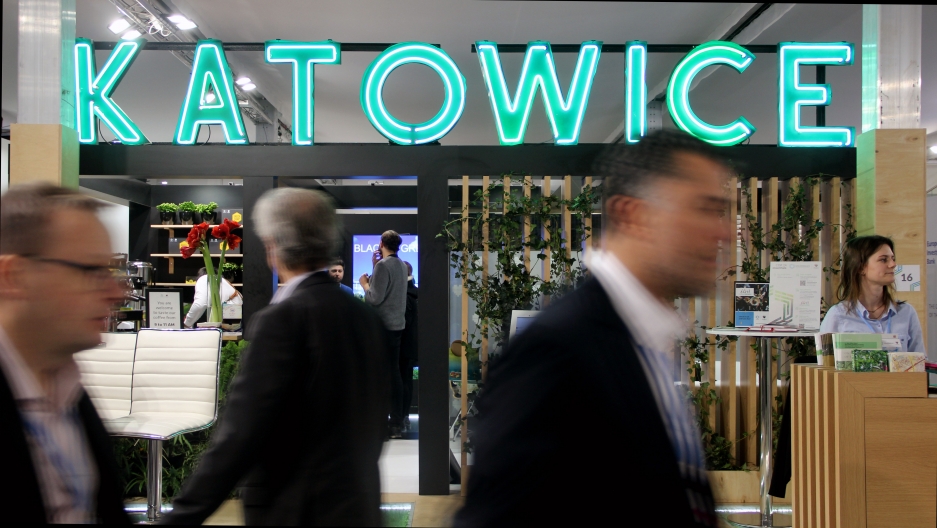 Katowice, Poland, the host of this year's climate conference, is the historic heart of Polish coal country — and, Poland hopes, an example of a city transitioning beyond fossil fuels.

It’s crunch time at the global climate conference in Katowice, Poland, and in the hallways and conference rooms, among sleep-deprived delegates and activists, there’s a palpable worry.

The deadline for this year’s climate summit is tomorrow, and negotiators still haven’t resolved many of the most important issues. That’s led to concern that the summit could fail to deliver, not only on what was promised in Paris three years ago, but the greater commitments that most here say is needed now, as the dangerous realities of climate change become more clear.

It’s a concern that’s shared at the highest levels. UN Secretary General António Guterres flew in to Katowice on Wednesday to deliver what he called “a dramatic appeal” — to tell the countries gathered here that they are running out of time.

“To waste this opportunity in Katowice would compromise our last, best chance to stop runaway climate change,” Guterres told delegates. “It would not only be immoral, it would be suicidal.” 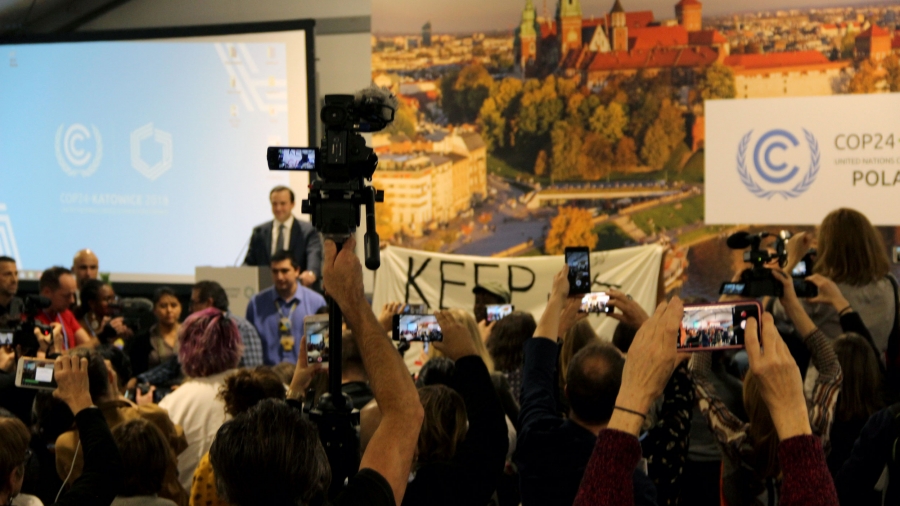 Journalists crane to get a view as protesters turned the US event Monday into pandemonium.

Negotiators here have a daunting task. Three years ago, in Paris, nearly every country on Earth agreed to slash carbon pollution with the goal of limiting global warming to no more than 2 degrees Celsius above preindustrial levels. That’s about 1 degree beyond where we already are.

But they left the details of how to do that to be worked out later. That’s what this meeting is supposed to deliver: the Paris “rule book,” including decisions on how countries must calculate greenhouse gas emissions and how much money rich countries will devote to developing countries to help cope with climate change.

Since the Paris Agreement was signed, the stakes have only gotten higher. Scientists say there are clear signs that climate change is already making storms, floods, fires and droughts worse. A new report from the Intergovernmental Panel on Climate Change, or IPCC, concluded that warming must be limited to 1.5 degrees Celsius to avoid the worst impacts — like the loss of nearly all the world’s coral reefs, species extinction and rapid sea level rise.

That means the world must not only meet its Paris commitments — which most countries are not on track to do — but also raise those pledges significantly.

So far, negotiators have not mustered the will to do that. 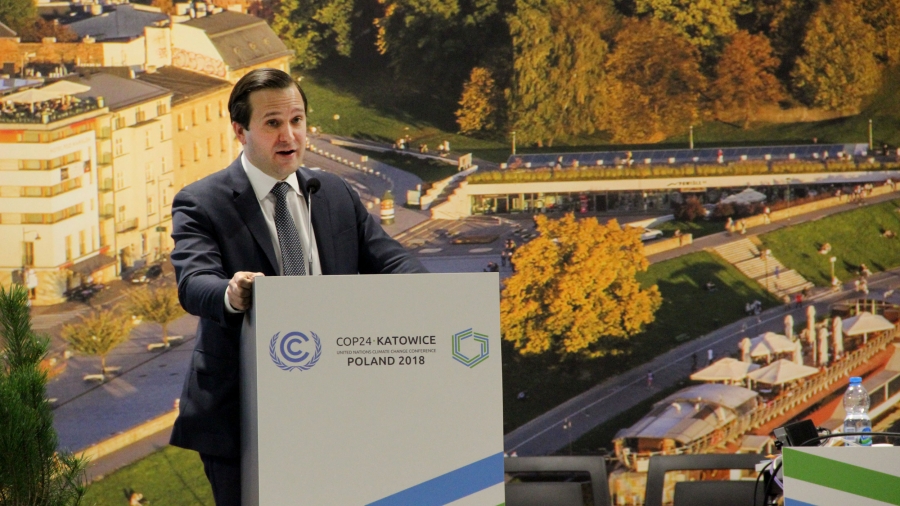 White House energy and environment adviser Wells Griffith hosted the only official US event of the conference: a panel touting new technologies in coal, gas and nuclear power.

One wild card in the discussions is the US. President Donald Trump has promised to pull the US out of the Paris Agreement as soon as he can, in November 2020.

But until then, the US is still at the negotiating table — even as Trump administration officials criticize the process.

“The president has made it clear that under his leadership, the United States will not subject its citizens to agreements that hamstring our economic growth, prosperity or national security,” White House energy adviser Wells Griffith told participants earlier this week.

Griffith hosted the only official US event at the conference, which was devoted to innovations in coal, gas and nuclear power. He made it clear that the US is opposed to any limits on the use of fossil fuels, and played down the threat of climate change.

Many here think it’s the US that’s refusing to face reality. American negotiators antagonized many countries when they joined forces with Russia, Saudi Arabia and Kuwait to block the conference from “welcoming” the IPCC’s report, insisting instead that the conference merely “take note.” The position was read as a refusal to accept the report’s findings.

The Trump administration has also refused to pay what the US already promised to help poorer nations respond to the climate crisis. That has infuriated developing countries who say that the US, as the largest historical emitter, bears much of the responsibility for global warming while they will bear many of the consequences.

On Tuesday, Ralph Regenvanu, the foreign minister of the Pacific island nation of Vanuatu, said publicly what many people here are saying privately: The Americans are blocking progress. Negotiators for the US and other rich countries will be condemned by history, he said.

“Whether you welcome, or note, or shamelessly ignore the science altogether, the fact remains that this is catastrophic for humanity,” Regenvanu said. “Party negotiators blocking meaningful progress should have much on their conscience.” 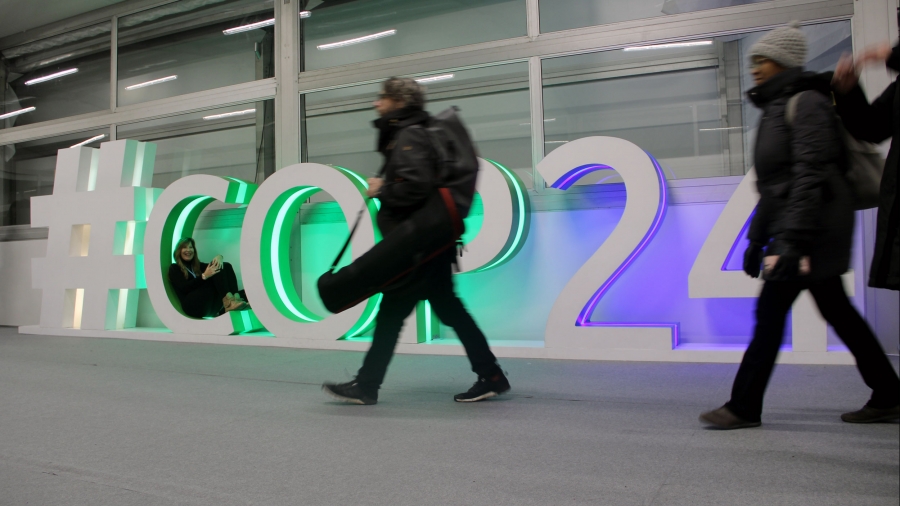 It’s impossible to say yet what the American impact on the final outcome here will be. Past negotiators say that discussions often kick into high gear only in the very last days. But observers say perhaps even more important than what the US is doing is what it’s not doing: providing leadership.

“I don’t think there’s really any substitute for the US when it comes to its ability to pull the world together and be a counterpart for China,” said Sue Biniaz, who helped draft the Paris Agreement and was a State Department climate lawyer for decades until she left last year.

Biniaz says the Paris Agreement was only possible because the US and China — the world’s two largest emitters — came to an agreement ahead of time, and the American government under former President Barack Obama put its full weight behind the push for an accord. She says there’s no equivalent leadership this time around. That’s especially true as major European players, like France, Germany and the UK are distracted by politics at home.

“Others can step in in various ways, but I don’t think the sum of the parts are as big as the whole of the role that the US used to play,” Biniaz said.

But despite the public statements and actions of the American delegation, many say that things are somewhat different behind the scenes.

Biniaz says many of the negotiators are actually the same career officials who worked on the Paris deal under the Obama administration — and in many cases, they are pursuing the same goals, including one global standard for reporting and tracking emissions.

“My perception would be that the US delegation is conducting itself in a workmanlike way, no more or less than any other negotiating team,” Biniaz said. “In that regard, it’s kind of like business as usual.”

But for many delegates here, anything short of a breakthrough is unacceptable.

Mohammad Nasheed is the former president of the Maldives, an island nation in the Indian Ocean. In a passionate address today, he reminded the audience that for his country, the stakes are existential.

“We are not prepared to die,” he said. “The Maldives has no intention of dying. We are not going to become the first victims of the climate crisis. Instead, we are going to do everything in our power to keep our heads above water.”

Nasheed was a star of the ill-fated Copenhagen climate summit in 2009. Though the Paris Agreement raised his hopes over the last decade, he says not much has really changed.

Still, he said, it’s not too late to avoid catastrophic warming.

“We can still do it,” Nasheed said. And “every country at this summit will have hell to pay if we don’t.”