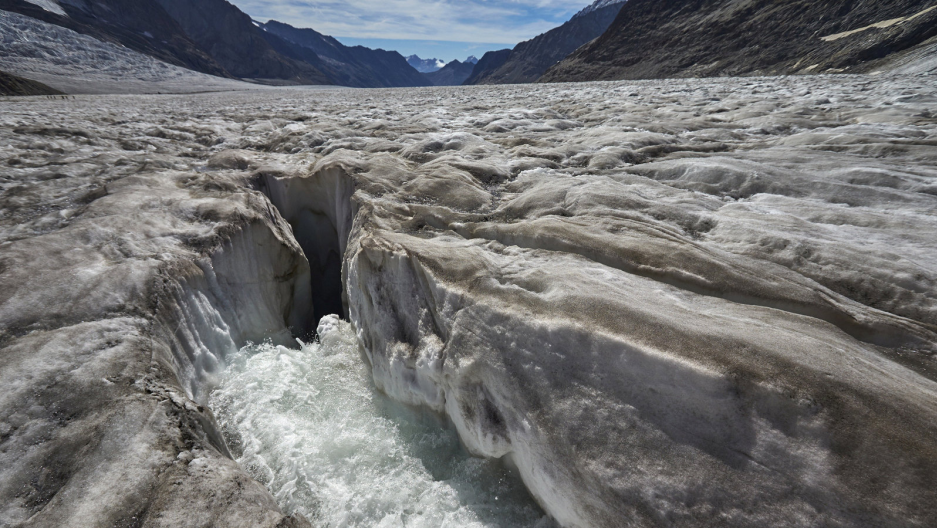 Water from the melting glacier runs down through a hole in the Aletsch Glacier on the Jungfraufirn Glacier, Switzerland, Aug. 28, 2015.
Credit:

Global warming is on course to exceed the most stringent goal set in the Paris agreement by around 2040, threatening economic growth, according to a draft report that is the UN's starkest warning yet of the risks of climate change.

Governments can still cap temperatures below the strict 1.5 degrees Celsius (2.7° Fahrenheit) ceiling agreed in 2015 only with "rapid and far-reaching" transitions in the world economy, according to the UN's Intergovernmental Panel on Climate Change (IPCC).

The final government draft, obtained by Reuters and dated June 4, is due for publication in October in South Korea after revisions and approval by governments.

It will be the main scientific guide for combating climate change.

"If emissions continue at their present rate, human-induced warming will exceed 1.5°C by around 2040," according to the report, which broadly reaffirms findings in an earlier draft in January but is more robust, after 25,000 comments from experts and a wider pool of scientific literature.

The Paris climate agreement, adopted by almost 200 nations in 2015, set a goal of limiting warming to "well below" a rise of 2°C above pre-industrial times while "pursuing efforts" for the tougher 1.5° goal.

The deal has been weakened after US President Donald Trump decided last year to pull out and promote US fossil fuels.

Temperatures are already up about 1°C (1.8°F) and are rising at a rate of about 0.2°C a decade, according to the draft, requested by world leaders as part of the Paris Agreement.

"Economic growth is projected to be lower at 2°C warming than at 1.5° for many developed and developing countries," it said, drained by impacts such as floods or droughts that can undermine crop growth or an increase in human deaths from heatwaves.

In a plus-1.5°C world, for instance, sea level rise would be 10 centimeters (4 inches) less than with 2°C, exposing about 10 million fewer people in coastal areas to risks such as floods, storm surges or salt spray damaging crops.

It says current government pledges in the Paris Agreement are too weak to limit warming to 1.5°C.

IPCC spokesman Jonathan Lynn said it did not comment on the contents of draft reports while work was still ongoing.

"It's all a bit punchier," said one official with access to the report who said it seemed slightly less pessimistic about prospects of limiting a rise in global temperatures that will affect the poorest nations hardest.

The report outlines one new scenario to stay below 1.5°C, for instance, in which technological innovations and changes in lifestyles could mean sharply lower energy demand by 2050 even with rising economic growth.

And there is no sign that the draft has been watered down by Trump's doubts that climate change is driven by man-made greenhouse gases.

The draft says renewable energies, such as wind, solar and hydro power, would have to surge by 60 percent from 2020 levels by 2050 to stay below 1.5°C "while primary energy from coal decreases by two-thirds".

By 2050, that meant renewables would supply between 49 and 67 percent of primary energy.

The report says governments may have to find ways to extract vast amounts of carbon from the air, for instance by planting vast forests, to turn down the global thermostat if warming overshoots the 1.5°C target.

It omits radical geo-engineering fixes such as spraying chemicals high into the atmosphere to dim sunlight, saying such measures "face large uncertainties and knowledge gaps."