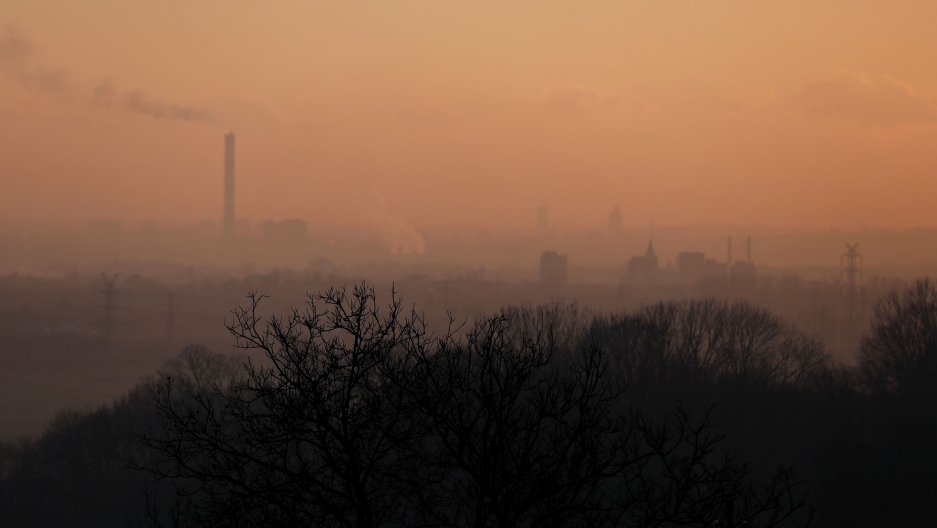 Smog is seen in this general view of the Upper Silesian Industrial Region from Bedzin, near Katowice, Poland, Dec. 5, 2018. Katowice, the heart of Polish coal country, is also hosting this year's climate convention.

Andrzej Guła walks his bike across the famous medieval square in the center of Krakow, in southern Poland. The square is bustling with tourists, packing into coffee shops and restaurants to escape the cold. A crew is putting up Christmas lights.

Guła grew up here, and he takes clear pride in his hometown.

“Krakow is a beautiful town, it’s historic,” he says. “It has just one big problem.”

Krakow has some of the worst air quality in Europe — and it’s not alone in Poland. This time of year, as the weather gets cold, Polish cities suffer from smog levels that can rival notoriously polluted places like Beijing. The European Environment Agency estimates that each year, more than 45,000 Poles die prematurely because of poor air quality.

On a bad day, Krakow can see a thick, acrid haze reminiscent of the fog that hung over many 19th century cities in the early days of industrialization. And the main source of that smog is the same as it was back then: coal. Millions of people in Poland still heat their homes with it. It’s not uncommon to see black or brown smoke rising from chimneys, a sign of the old coal boilers cranking away inside.

This is the other legacy of a fuel that is in the news these days — mostly for its climate impact. Just an hour from Krakow, representatives from around the world are meeting in the city of Katowice for this year’s global climate summit. In the hallways and conference rooms, one thing tops the agenda: how to phase out coal, the most carbon-intensive major fuel source. But Poland, which is hosting the conference, is deeply dependent on coal and an unapologetic coal producer.

Or at least, it has been. But now, a grassroots movement might be nudging this coal country away from coal.

That’s in part because of the work of Andzrej Guła.

Guła notes that the Polish government doesn’t even bother issuing air quality alerts until pollution is well above international standards. He jokes the government must think Poles are special.

“We have iron lungs, you know,” he says. “We are specially designed for breaking this heavy smog!” 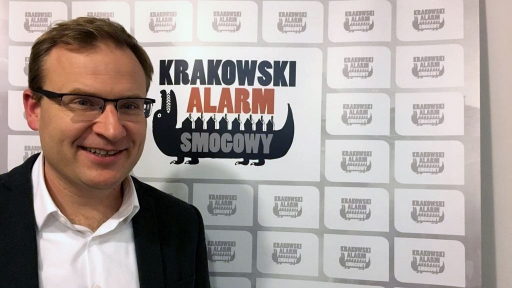 In 2012, Andrzej Guła, pictured above, and several friends founded Krakow Smog Alert to raise awareness of the city's smog problem.

Today we’re lucky. The freezing wind blowing across the square is also sweeping the smog out of the city. But Guła says, when it’s bad, it’s really, really bad.

“You feel it, you see it,” he says. “When you go back home, your clothes stink.”

The saying here is, the smog gets so bad, you can bite it. And for years, Guła says, people just took bad air for granted. That’s the way things were.

“It was November, I remember, very bad November,” Guła says. “Me, together with a group of friends, we said, we can’t stand it anymore, so we need to do something about it.”

They started a Facebook page, where they’d post air quality numbers, tracking the levels of particulate matter, one of the harmful elements of smog. The page hit a nerve. Hundreds of people started to follow it. In the spring of 2013, when the group called for protests, people flooded into the streets.

They formed an organization called Krakow Smog Alert to push for change — and the campaign got results. In 2013, the city of Krakow approved a law banning solid fuels like coal and subsidizing residents who replace their old, coal boilers. The ban will go into effect in 2019. Ahead of the deadline, many of the city’s buildings have already switched away from coal.

But Krakow’s smog problem hasn’t gone away. Many of the old boilers are still in place and surrounding cities and towns still burn as much coal as ever. The smoke from them often settles over Krakow. 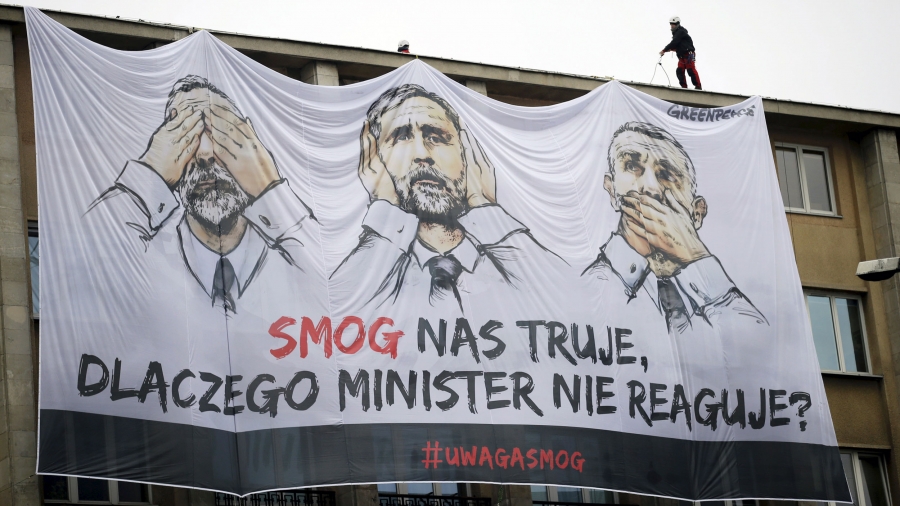 Greenpeace activists install a large banner featuring images of Poland's Environment Minister Maciej Grabowski and the slogan "Smog poisons us, why minister does not react?" on the Environment Ministry building in Warsaw in 2015.

“We woke up and outside … it was really huge fog,” he says. “The smell of air was terrible, and people started to ask themselves, ‘What is happening?’”

Unusually cold temperatures had prompted a spike in coal burning and the resulting smog made news around the world.

Tomaszewski remembers covering his face with a scarf for his daily commute. “It was really hard to get to work and not breathe this air,” he says.

But it wasn’t just the level of smog in Warsaw that was new. The crisis coincided with the spread of smartphone apps that allowed people to check air quality. For the first time, they could find out what they were breathing. And when they did, they saw particulate matter spiking.

“My wife checks the air pollution before she goes with the child on a walk or jogging,” he says.

Tomaszewski says that awareness is just beginning to change the perception of coal in a country that has long embraced it.

Along with heating homes, Poland gets almost 80 percent of its electricity from coal. Those power plants have pollution controls so they aren’t major contributors to smog. But they still release climate-warming carbon dioxide. A recent survey found that Poles are concerned about that too.

“They are saying they care about climate change, they don’t want coal,” Tomaszewski says. “Seventy-two percent of Poles are saying coal should not be the main fuel of our energy sector.”

Poland’s ruling Law and Justice party has strong ties to the coal industry and insists coal will remain a key part of the nation’s energy mix. But the smog crisis has forced the government to declare air quality a priority. This year, it set up a fund to help households switch from coal heat to cleaner fuels.

Przemysław Hofman is a top air quality official. He says the new initiative is a major investment. Overall, the government plans to spend more than $25 billion dollars over the next decade to eliminate sources of smog.

“It's definitely the first of this scale,” Hofman says, speaking through an interpreter.

But the government plan does not include a commitment to meeting European Union air quality standards. Hofman says the administration is focused on eliminating sources of pollution, not pursuing a set goal.

For Andrzej Guła in Krakow, it’s a step forward, but it’s still not enough. He’d like to see regułations banning the sale of low-quality coal for homes, among other changes.

Still, Guła says there’s no going back, now that people know what they — and their kids — are breathing.

His youngest daughter, who is in elementary school, recently asked her parents to get her a new anti-smog mask — but a fashionable one.

“She wanted to have this mask, and she wanted the nice mask,” he says with a laugh. For her, it’s just a fashion accessory.

Guła would like to see the day when that’s no longer true. That’s why he started this work.

“Because I wanted to solve my problem,” he says. “It’s my problem and a problem of my family. I thought if I wanted to stay in Krakow, I must do something about that.”