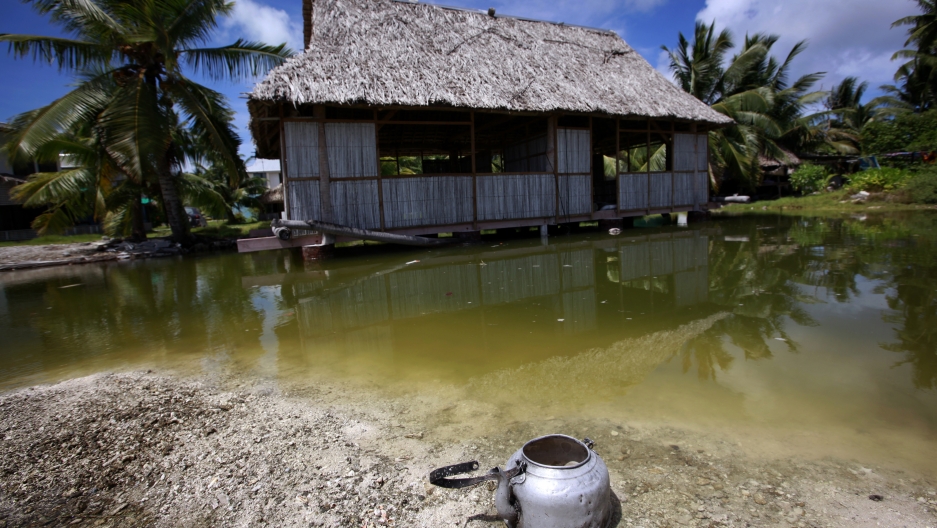 An abandoned house that is affected by seawater during high-tides stands next to a small lagoon near the village of Tangintebu on South Tarawa in the central Pacific island nation of Kiribati, May 25, 2013. Kiribati consists of a chain of 33 atolls and islands that stand just meters above sea level, spread over a huge expanse of otherwise empty ocean. Due to a combination of inundatation and saltwater contamination of freshwater supplies, Kiribati may become uninhabitable in mere decades.

Millions of people have to move each year due to natural disasters and the impacts of climate change. Droughts that kill crops in Somalia. Rising seas that erode riverbanks in Bangladesh. Increasingly powerful storms all over the world.

Many call these displaced people “climate refugees.” But legally, there’s no such thing.

The UN’s 1951 refugee convention specifies that only those who have “a well-founded fear of being persecuted because of his or her race, religion, nationality, membership of a particular social group or political opinion” qualify as a refugee.

That convention was signed shortly after World War II, when climate change wasn’t on anyone’s radar.

And today, experts say it’s impractical to try to rewrite that convention.

“We don’t think that climate migrants should be made into climate refugees and be part of the refugee convention,” said Nina Birkeland, an expert on disaster displacement and climate change at the Norwegian Refugee Council.

“We know there’s a lot of suspicion, a lot of negativity around people on the move,” Birkeland said. “So, if you try to negotiate that again, we think this will be kind of a dead-end.”

That means “there is no formal, legal protection for these affected people,” said Anwarul Chowdhury.

Chowdhury is a former ambassador for Bangladesh and former UN undersecretary representing the world’s most vulnerable nations. He says legal protections for climate migrants are lacking even as their numbers are expected to swell.

“Things have changed since 1951, when the refugee convention was adopted, which needs to be taken into account,” Chowdhury said.

But for the first time this week, the international community is taking a step toward recognizing climate migrants. 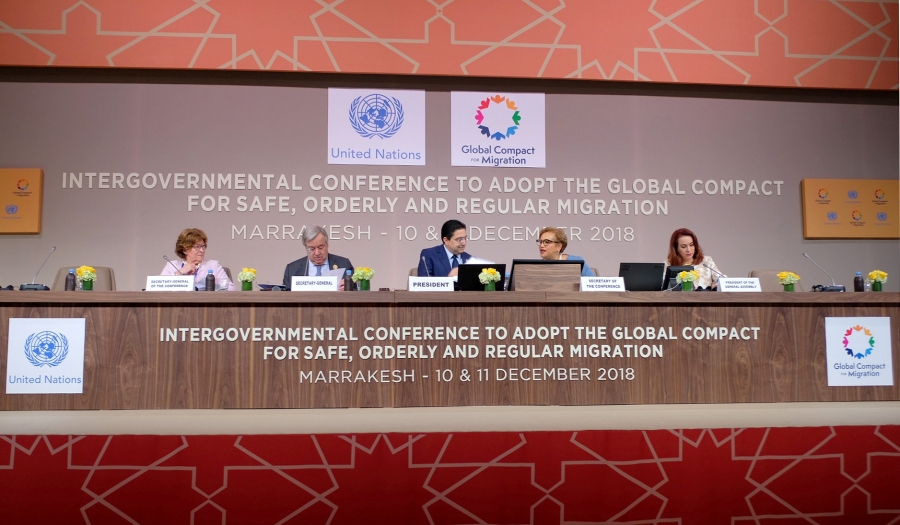 On Monday and Tuesday, leaders from 164 countries formally adopted the UN Global Compact for Migration at a meeting in Marrakesh, Morocco.

Two years in the making, it’s the first global agreement defining a common approach to migration.

“The simple fact that there is a section on climate change is in itself quite a novelty,” Gemenne said.

The document identifies climate change as a driver of migration and suggests countries work together to start planning for people who move due to natural disasters and climate change.

“And it also restates the need to tackle the causes of climate change and to support adaptation in developing countries so that people are not forced to migrate in relation to climate change,” Gemmenne said.

But will it work?

But the document has limitations. It’s voluntary and nonbinding, and it caused controversy across Europe over the past few weeks. Several EU countries joined the US and Australia in opting not to adopt the document.

So, it remains to be seen if, or how, the 34-page framework will translate into actual policy changes, like more humanitarian visas for those displaced by drought or rising seas.

“It is difficult to say,” Gemenne said. “It will all depend on what the governments will do.”

“In the current context, when migration is an increasingly divisive issue, I think that it is quite remarkable that countries can agree on a kind of common basis of cooperation on migration,” Gemanne said.

But in the end, climate migration experts argue, the real key to tackling this crisis is limiting global warming in the first place.