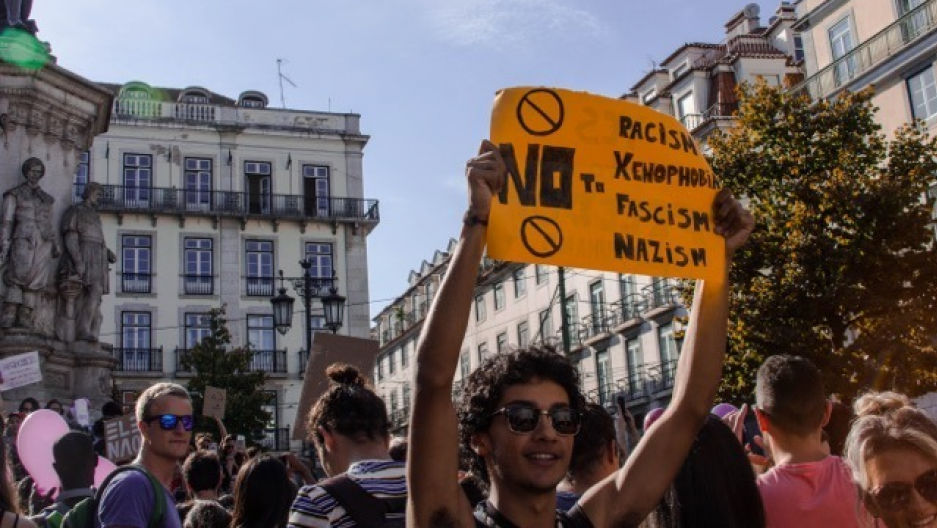 A man holds a sign at a protest of Brazilian presidential candidate Jair Bolsonaro at Camoes Square in Lisbon, Portugal, on Sept. 29, 2018.

Rio de Janeiro-born Lidiane de Carvalho has been living in Europe for over a decade but she just can’t stop obsessing about the situation in her native Brazil.

With far-right candidate Jair Bolsonaro leading the polls ahead of the first round of Brazil’s two-round presidential race on Sunday, Carvalho, a 40-year-old lawyer, decided she couldn’t just sit home in her Lisbon apartment and watch as the final weeks of the high-drama campaign played out.

Joining forces with around a dozen other Brazilian women in Portugal with whom she’d connected on Facebook, Carvalho helped organize a protest in downtown Lisbon. The Sept. 29 event, which drew hundreds of people from across the political spectrum, mirrored similar women-led protests that brought tens of thousands onto the streets of major cities across Brazil on the same day, united under the slogan #EleNão, or #NotHim.

“It’s hard to take a political stance when you live abroad because you get a lot of pushback from people back home who say, ‘you don’t live here, so you don’t get to have an opinion,’” said Carvalho, a single mother who moved to Europe in 2007 to pursue a master’s degree and now is in private practice as an immigration lawyer, helping shepherd foreigners moving to Portugal through the bureaucratic hoops of obtaining residency here. “I don’t think that’s fair. I might not live in Brazil, but my friends and my family are there, and as a Brazilian I am really worried about the direction the country is taking.”

With popular former President Luiz Inácio Lula da Silva serving time on corruption charges and barred from running, Bolsonaro, a former army officer who nearly died after being stabbed during a rally in September, is seen as the front-runner ahead of the Oct. 7 round one-race. His supporters regard him as a tough-talking political outsider, capable of rooting out widespread corruption and bringing crime under control. But Bolsonaro remains a polarizing candidate. He’s repeatedly expressed nostalgia for Brazil’s 1964-85 military dictatorship, told a fellow congressperson she was too “ugly” to rape, and has said he would rather his son die than be gay.

“His discourse is filled with hate,” said Natália Rocha Santos, a 28-year-old former schoolteacher from the remote Amazonian state of Rondônia who’s pursuing a master’s in sociology at the University of Coimbra. “I find his positions really frightening.”

Santos was another one of the organizers of the #EleNão demonstration in Lisbon — the latest in an increasingly visible series of demonstrations by Brazilians living in Portugal.

Given the intertwined histories of two countries — Portuguese galleons reached Brazil in 1500, and Portugal ruled the giant South American country until 1822 — migration between the two nations stretches back centuries, flowing back and forth in lockstep with economic booms and busts in each nation. A biting recession in Portugal that started around 2011 saw many decamp to then-booming Brazil, but the ongoing political and economic crises in Brazil turned the tide, and Brazilian immigration to Portugal is now on the rise again.

Brazilians represent the largest community of foreign residents in this 10 million-strong country, with more than 85,000 Brazilians registered with Portugal’s Immigration and Borders Service. (Their real numbers could actually be significantly higher, as that count doesn’t include Brazilians who hold dual citizenship with Portugal or other European Union nations.)

And unlike in migrations past, many of the Brazilians now flocking to Portugal are not economic migrants seeking improved prospects in Europe but rather wealthy people looking to escape the spiraling violence and instability in Brazil. These well-to-do new arrivals are snapping up property in Portugal, particularly in the tony seaside enclave of Cascais, making Brazilians among the leading foreign buyers of real estate here.

Related: A year after the Rio Olympics, gunfights continue and troops patrol the streets

While there have long been groups of Brazilian activists in Portugal, it was the nationwide protests that swept Brazil in 2013, ahead of the 2014 World Cup and 2016 Olympics, that electrified — and politicized — Portugal’s Brazilian community, activists here say. That wave of demonstrations, the biggest in Brazil in a generation, also brought Brazilians living in Portugal onto the streets of Lisbon to protest against corruption, high prices and poor public services back home.

Since then, big demonstrations in Brazil have sparked mirror events in the Portuguese capital, many of them concentrated in the Praça Luís de Camões, or Camões Square, a picturesque square in downtown Lisbon where the Brazilian Consulate is located. Camões Square was the site of a gathering to mourn Marielle Franco, the Rio de Janeiro city councilwoman from the leftist PSOL party who was gunned down, along with her driver, in March, as well as several protests during the process that culminated in the 2016 impeachment of President Dilma Rousseff.

“In Brazil, I used to be pretty apolitical,” said Samara Azevedo, a 31-year-old from Rio state who’s been in Portugal for four years. “I was born after the dictatorship, so I didn’t really think much about politics when I was young, and really it was only after I arrived in Portugal that I became active in Brazilian politics.”

Azevedo is among the core participants in the Coletivo Andorinha, or Swallow Collective, an umbrella group of mostly left-leaning Brazilian activists in Portugal that coalesced during the impeachment drama in 2016 and has since organized some 50 events in throughout the country and scored thousands of followers on social media. Azevedo stressed that events by the collective, as well as similar groups in Paris and London, have helped give added visibility to the protests.

“Often, TV news in Brazil won’t cover a protest in Rio or São Paulo with tens of thousands of people,” she said, adding, “but they will cover a demonstration with several hundred people in Europe.”

Azevedo, who also helped organize the #EleNão protest in Lisbon, said the event filled her with a much-needed sense of empowerment.

“Given the situation in Brazil, it’s really easy to feel overwhelmed by desperation,” she said. “But coming together and making your voice heard makes you feel useful, like you are doing something for your country, even though you’re far away.”

Fellow protester Camilla Alves Pinho, a 26-year-old from the coastal state of Espírito Santo who moved to Lisbon in April for her studies, agreed.

“It’s really our duty to keep participating in the democratic process from afar,” she said. “Even when you live abroad, you never really leave because your heart’s always in Brazil.