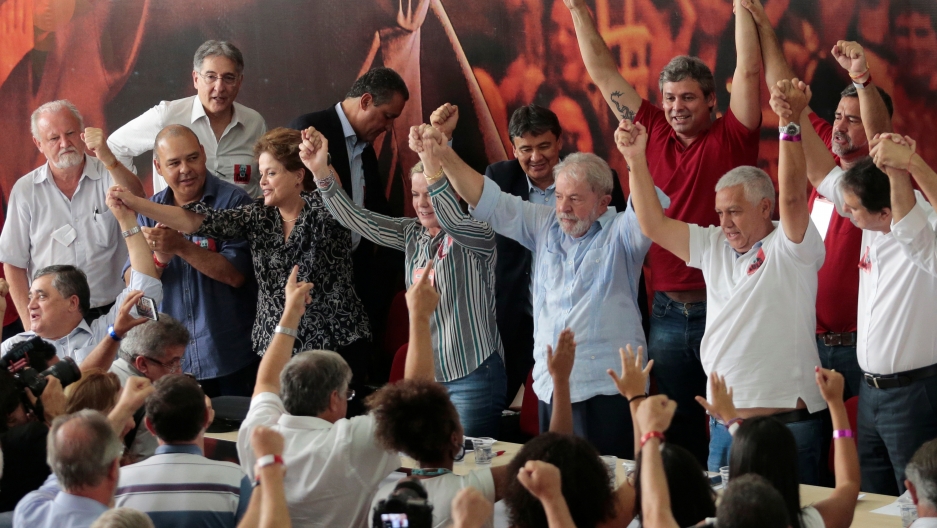 Former Brazilian President Luiz Inácio “Lula” da Silva attends a meeting with members of the Workers Party that decided he will be its candidate again in the 2018 election despite losing an appeal against a corruption conviction that will likely bar him, in São Paulo, Brazil.

On Wednesday, an appeals court ruled Luiz Inácio “Lula” da Silva, Brazil’s president from 2003 to 2011, guilty of corruption and money laundering charges, increasing his previous prison sentence on those charges from 9 1/2 to just over 12 years. On Thursday, Lula’s Workers Party confirmed he will be their candidate for this October’s presidential election. Lula can still appeal in two of three possible courts, though success is unlikely, setting up Brazil’s presidential race to unfold alongside a race against the justice system and a national conversation about inconsistent sentencing in the sprawling Car Wash anti-corruption probe.

This week’s charges against Lula center around a refurbished apartment penthouse worth over a million dollars, which the court ruled he received as a bribe in exchange for unfairly favoring construction giant OAS for government contracts during his presidency. Lula denies ownership of the apartment, saying he did not have the key and never slept in it.

Brazil’s federal government braced for unrest surrounding Wednesday’s trial, installing snipers on rooftops near the Porto Alegre courthouse and blocking airspace above it. Lula supporters staged protests in Porto Alegre and São Paulo on Wednesday, denouncing the proceedings against him as “political persecution” that is, in their eyes, disproportionate to the accusations against Lula. Several of Lula's political opponents have dodged imprisonment for similar charges.

Brazil’s Congress twice last year voted to drop federal charges against current President Michel Temer of arranging to receive a bribe of over $12 million and of running a criminal organization of congressmen who received over $150 million in bribe payments. Likely presidential candidate Fernando Collor stands accused by Car Wash prosecutors of receiving a roughly $10 million bribe. The charges against Lula were fast-tracked through the courts and criticized as technically weak in a collection of over 100 articles compiled by Brazilian jurists and law professors in 2017.

A small protest in favor of Lula’s condemnation was held in São Paulo on Wednesday. Those demonstrators agree with Car Wash prosecutors that Lula masterminded the kickbacks-for-contracts scheme inside Brazil’s government that ran during and after his presidency, involving lawmakers from every major Brazilian political party. This week’s case is one of seven total in which Lula is accused, with alleged bribes totaling roughly $10 million.

The idea that Brazil is building a robust and politically independent judiciary has been part of the country’s success story over the past two decades — that its growth into a middle-income country could also come with a reduction in inequality and a strengthening of democratic institutions, like federal public prosecutors (who brought the Car Wash cases) and the courts. Lula and his successor, Dilma Rousseff, were key boosters of the power of these prosecutors. But Lula’s trial, for many Brazilians, is one more piece of evidence that, as Brazilian political columnist Celso Rocha de Barros wrote last week, “The Car Wash investigators didn’t spare any side. But politically, only the left lost during the operation.”

Lula can appeal his sentence again; he has until Aug. 15 to register his candidacy and will campaign until he is sued and barred from doing so, in which case, he will likely nominate a successor to take his place. Currently second in presidential polls is authoritarian, tough-on-crime congressman Jair Bolsonaro, beloved by conservative Brazilians but not seen as a viable alternative for many Worker’s Party supporters, who want reassurance a candidate will prioritize the well-being of the poor. Brazil’s unemployment rate is currently 12 percent and youth unemployment is near 30 percent, according to the International Labor Organization — double the world average. Other possible players in the presidential race include environmentalist Marina Silva, television presenter Luciano Huck and São Paulo's current mayor and ex-“Apprentice” star, João Doria.

Social scientist Beatriz Pedreira, who has conducted research on political behavior across Latin America with think tank Update Politics, says the mesmerization with Lula’s trial in the run-up to such a wide-open election is a symptom of “the personalization of politics” — the abandonment of discussing policy solutions in favor of arguing whether certain figures are heroes or villains.

While political scandals dominated Brazilian headlines in recent years, the country registered its highest homicide total in recorded history in 2016. Additionally, a lack of government oversight on Amazon deforestation led to the deforestation rate shooting up in 2015 and 2016 after almost a decade of decline, with implications for climate patterns across the region and global warming writ large.

“When we say, ‘Brazil will finally work out now that we’ve arrested this one person!’ it’s easier to ignore the discussions with each other that are necessary in order to advance as a society,” Pedreira said. “It’s a very worrying, intolerant scenario.”