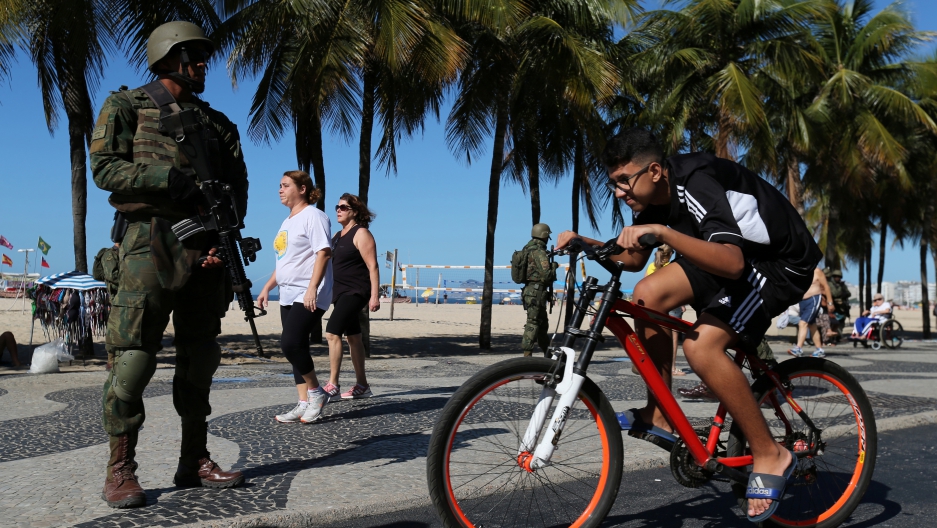 On Rio de Janeiro’s one-year Olympic anniversary, thousands of federal troops patrolled the streets. And they’re going to be there for a while.

Brazil’s defense ministry announced the troops will stay until the end of 2018. Their deployment is in response to criticism last month from house speaker Rodrigo Maia, among other local lawmakers, that “we have completely lost control of public security in Rio.” In June alone, over 106 people died in gunfire in the city. Many were killed in shootouts between drug traffickers and police.

“We are at war,” said Brazil’s Institutional Security Minister Sérgio Etchegoyen last week. “You can expect that undesirable things will happen, even some injustices.”

This is a major shift from the policing strategy launched before the Olympics, called “Pacification,” which was supposed to de-escalate tense relations between police and poor communities. Instead, last year, 920 people died during police raids in the state of Rio, more than double the 416 fatalities in 2013, according to Rio’s public security institute.

Sociologist Julita Lemgruber, who tracks police behavior and attitudes citywide at Candido Mendes University, thinks “it’s a failure of public security in Rio as a whole.” She says Rio police had a genuine opportunity to reform their ways ahead of the 2016 Summer Olympics, but there’s been no serious follow through.

“It's a media show marked with cynicism and hypocrisy,” Lemgruber says.

One example, she adds, is the army’s claim that it’s now necessary to bring tanks to Rio to map the local terrain. She points out that local police forces have spent heavily on intelligence in recent years — funds that authorities defended in order to prepare Rio for the Olympics.

Research by an Amnesty International initiative called CrossFire shows that it’s Rio’s impoverished favelas that are most affected by the security breakdown. Some neighborhoods experience daily shootouts that close schools and businesses.

Related: Amnesty's new app for Rio shootings was flooded with reports on day one

In one predawn sweep earlier this month, Rio security officials said thousands of police and troops were raiding favelas to break up gangs suspected of commercial truck robberies.

Thainã de Medeiros lives in the Alemão group of favelas.

“We’ve counted 197 days of shootouts through July,” he says — one almost every day so far this year. “So many lives lost, including both residents and police.”

Medeiros is part of a citizen journalism collective called Papo Reto, or “straight talk,” which denounces security failures in Alemão with the help of smartphones and video streaming.

On June 30, he woke up to go to work just as a gunbattle broke out near his house. So, he began recording a video via Facebook Live.

“It’s 7 a.m.,” he began. “The shootout is happening right now. I don’t know if there have been any fatal victims, or if anyone has been arrested.” His video would capture the sounds of over 30 gunshots being fired in just four minutes. “People are trying to go to work and go to school at this hour.”

Last month Medeiros helped launch a campaign called Favela Lives Matter, inspired by a partnership between Brazilian activists and American representatives of Black Lives Matter, who have now visited Rio twice. He says the campaign is turning up popular pressure on the government over its failure to deliver security to citizens.

And that activism is slowly bringing results. Last month political organizers from the Alemão favela worked with a public prosecutor to force the police to stop invading residents’ homes to set up makeshift operating bases.

Medeiros has seen at least one welcome Olympic legacy: “Resistance has increased, and we’ve formed new alliances between activists to push back against government failures.”