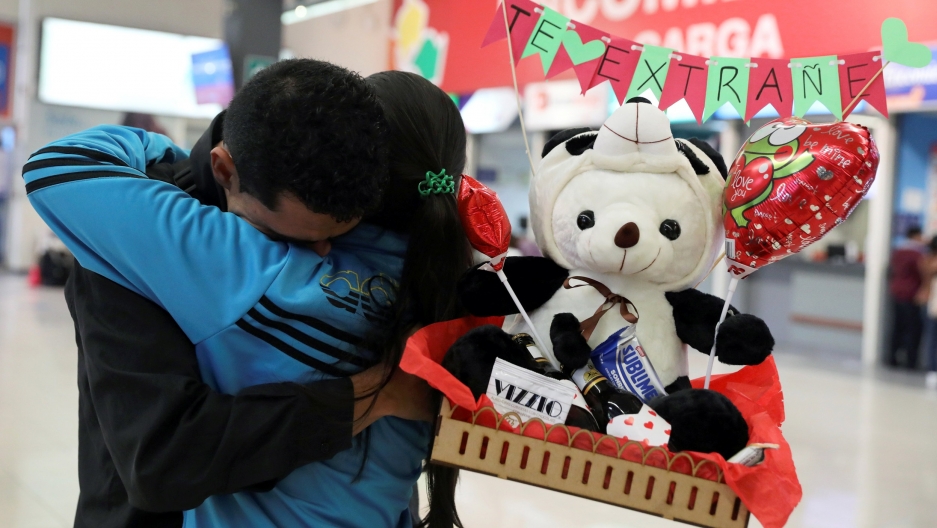 Venezuelan migrant Juan Guaracan hugs his wife, Paola Fernandez, as she arrives from the northern city of Tumbes, at the border with Ecuador, to the bus terminal in Lima, Peru, on Aug. 23, 2018. The sign reads: "I missed you."

Anti-immigration fervor has flared up in this year's race for mayor of Lima, with conservative candidate Ricardo Belmont stoking fears that Venezuelans fleeing their country's economic crisis are a threat to Peruvians' jobs and to public order.

Some 400,000 Venezuelans are now in Peru, with the majority having entered the Andean country of some 32 million people this year, according to Peru's immigration agency.

Venezuelans selling candies and coffee on the streets of Lima are now a common sight. Local media have covered the capture of Venezuelan criminal gang members extensively.

"They're going to take jobs from us poor Peruvians," Belmont said in an interview on local TV channel ATV on Wednesday. "Let's see them take a medical exam, like we ask of servants in our homes. Ask for a certificate of good conduct."

The son of a Frenchman and an Italian woman, Belmont was mayor of Lima from 1990 to 1995 and was known for his down-to-earth style and focus on public work projects.

His reemergence as an outspoken critic of Venezuelan immigration as he campaigns for the job again is the latest sign of a simmering backlash in parts of South America where Venezuelans have settled, potentially playing into politics for years to come.

Belmont's office did not immediately respond to requests for comment. His supporters say that Peru, a developing country where some 22 percent of the population live in poverty, should do more to help its worst-off citizens instead of helping foreigners.

Related: With Venezuela in crisis, mothers cross border to give birth

Last week, angry residents of a Brazilian border town who blamed Venezuelans for an assault in the town drove immigrants back to their country. Colombia, Ecuador and Peru have moved to require hard-to-get passports and not just national ID cards from Venezuelans, citing security concerns.

On Sunday, Vizcarra's government tightened the deadline by which Venezuelans must enter the country to be eligible for a temporary residency permit, closing the window at the end of October instead of the end of the year.

If elected mayor, Belmont would govern the city where most Venezuelan immigrants in Peru live, but would lack authority to decide policy on immigration. Belmont hinted in his ATV interview that he hopes to run for president in the future.