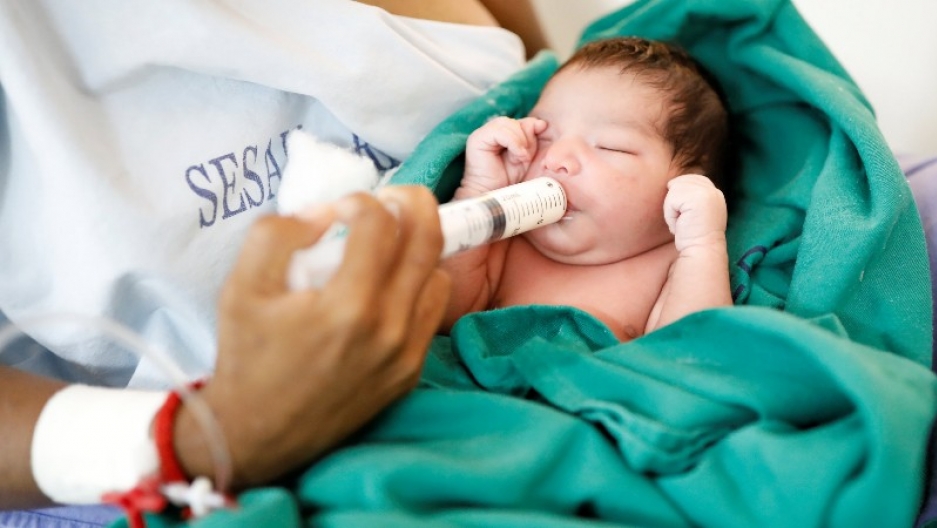 Pregnant Venezuelan women are leaving their country due to lack of prenatal care, medicine and diapers and giving birth across the border in Brazil, where three Venezuelan babies are born every day.

"My baby would have died if I had stayed. There was no food or medicine, no doctors," said Maria Teresa Lopez as she fed her daughter Fabiola, who was born on Monday night by caesarian section in the maternity hospital of Boa Vista, the capital of Brazil's Roraima border state.

Lopez, 20, hitched 800 kilometers from her home in the Orinoco river delta to the Brazilian border five months ago. She is one of several hundred thousand Venezuelans who have fled the economic and political turmoil in their homeland, mostly to neighboring Colombia.

Related: Across Women's Lives: Stories of women and girls changing their worlds and ours.

The massive influx of Venezuelans has overburdened social services in Roraima state and led to an increase in crime, prostitution, disease and incidents of xenophobia.

Births of Venezuelan babies at the Boa Vista maternity hospital surged to 566 last year and 571 in the first half of 2018, from 288 in 2016 when the flow of Venezuelan refugees began, the Roraima health department said. There were no births in 2015, it said.

Roraima health safety coordinator Daniela Souza said the state has only one maternity hospital and it is being stretched to the limit, with patients sleeping on cots in the corridors. Syringes, gloves and other supplies are running out, she said.

"There are 800 people coming across the border every day and many of the women and children need medical care," Souza said. The number of Venezuelans attended at the state's medical centers has risen from 700 in 2014 to 50,000 in 2017 and 45,000 in just the first three months of this year, she said.

Related: Across Women's Lives: How far would you go to have a biological child?

The Brazilian government and Venezuela’s Information Ministry did not immediately respond to requests for comment.

Roraima's governor has asked Brazil's Supreme Court to close the border to be able to deal with the immigration crisis. The federal government in Brasilia has ruled that out on humanitarian grounds.

Carmen Jimenez, 33, who arrived from Ciudad Bolivar eight months pregnant and gave birth in the Boa Vista hospital, said she was amazed to see so many Venezuelan mothers there.

"I won't go back to Venezuela until there is food and medicine, and the streets are safe again," she said holding her 4-day-old daughter, Amalia.

Lopez, a Warao Indian of the Orinoco delta, said she would only return to pick up her first daughter, who remained behind with her grandmother because she was too young for the arduous journey to the border.

Brazil has received her well and her husband found work doing odd jobs, painting and mowing lawns, Lopez said, as she fed her baby milk with a large syringe.

"There is nothing left for us there," she said. "I did not get an ultrasound until I got to Brazil and it was free. I want to stay."