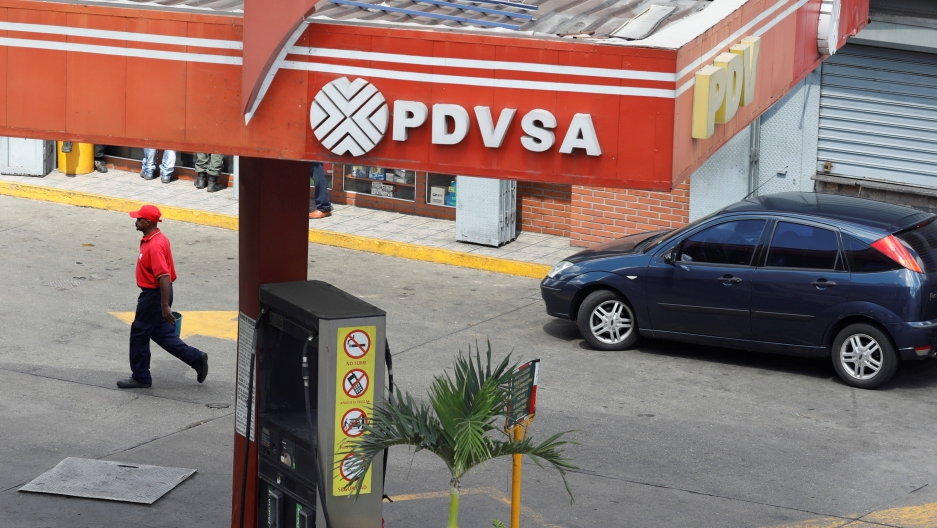 The corporate logo of the state oil company PDVSA is seen at a gas station in Caracas, Venezuela Nov. 22, 2017.

Venezuela was once Latin America’s richest economy, with the largest proven oil reserves in the world. Now, the oil infrastructure is crumbling and oil production has plummeted, severely limiting the amount of money the government can spend importing food and medicine.

How did Venezuela get here?

Related: Photos: A year of protests and crisis in volatile Venezuela

Monaldi says that in 2003, Venezuela’s then-president Hugo Chavez fired about half the workforce of the state-run oil corporation, Petroleos de Venezuela (PDVSA), for taking part in a strike. About 80 percent of the top managers and engineers lost their jobs. PDVSA never recovered.

Chavez also started squeezing more and more money out of PDVSA to fund his social programs — money that would have otherwise been reinvested into PDVSA. Monaldi says the oil industry requires a huge amount of capital investment to maintain.

“Venezuela needs to invest around $8 billion a year just to keep current levels,” says Monaldi. “And the government is investing maybe half of that.”

“Eventually, when the price of oil collapsed in 2014, these factors combined to lead to a dramatic collapse in the last few years [of oil production] — of almost one million barrels decline in just four years,” says Monaldi.

And the lack of adequate investment means “shortages of gasoline domestically because of lack of investment in the refineries, accidents and a lot of environmental issues,” Monaldi adds.

Even now, with the global price of oil on the rise and other oil-producing economies on the mend, Venezuela continues to suffer.

“In the short term, it’s very difficult to get Venezuelan oil production up, because the national oil company owes money to every single service company," says Monaldi. "It has a lot of difficulties in managing the basic maintenance of their facilities and they have committed a lot of their existing production to repay loans from China and Russia.”

One way Venezuela can start getting out of this mess, says Monaldi, is to open up the Venezuelan oil industry to foreign investment “in a way that’s credible with institutions and that makes it clear to investors that they will get paid.”

Though, he acknowledges, that’s a tall order. Foreign investors aren’t all that eager to get involved in a dysfunctional country right now.

There’s “the lack of credibility, and the crime rates,” Monaldi says. But there’s also opportunity.

“Venezuela has one of the most prolific endowments of oil in the world. And its very well located to supply some markets — like the US markets. So there’s some interest.”