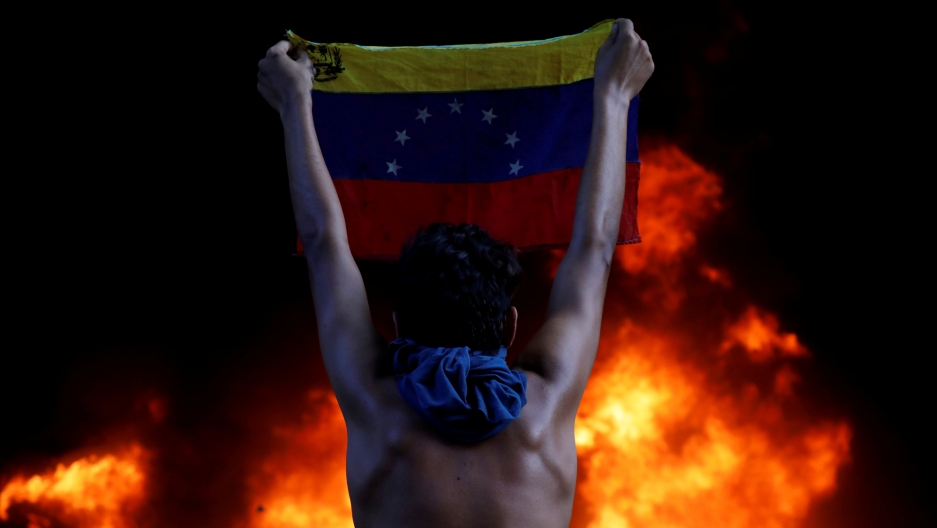 A protester holds a national flag while standing in front of a fire burning at the entrance of a building housing the magistracy of the Supreme Court of Justice, during a rally against Venezuela's President Nicolas Maduro, in Caracas, Venezuela, June 12, 2017.

Looking back on Venezuela in 2017, it was an exceptional year, a “perfect storm” of political and economic crisis.

Going into a fourth year of crippling recession, the country’s 30 million people found themselves skipping meals, suffering shortages of basic foods and medicines, jostling in lines for ever-scarcer subsidized goods, unable to keep up with dizzying inflation rates, and emigrating in ever larger numbers.

In unprecedented scenes for the once-prosperous OPEC nation, some citizens survived only by scavenging through garbage.

Not surprisingly in that context, President Nicolas Maduro’s ruling Socialists — the inheritors of Hugo Chavez’s “21st century revolution” — lost popularity on the street, and the opposition coalition sensed a chance to unseat them.

The tipping point came in March when the pro-Maduro Supreme Court essentially took over functions of the opposition-led National Assembly. Though the controversial ruling was later modified, it was a trigger and rallying cry for the opposition, which began a campaign of street protests that ran from April to July.

Hundreds of thousands took to the streets across Venezuela, decrying economic hardship, demanding a presidential election, urging a foreign humanitarian aid corridor, and seeking freedom for scores of jailed activists. Slogans that read “Maduro, murderer!” and “Maduro, dictator!” began appearing on roads and walls around the country. Though the majority of protesters were peaceful, youths wearing masks and brandishing homemade Viking-style shields began turning up at the front of rallies to taunt security forces. 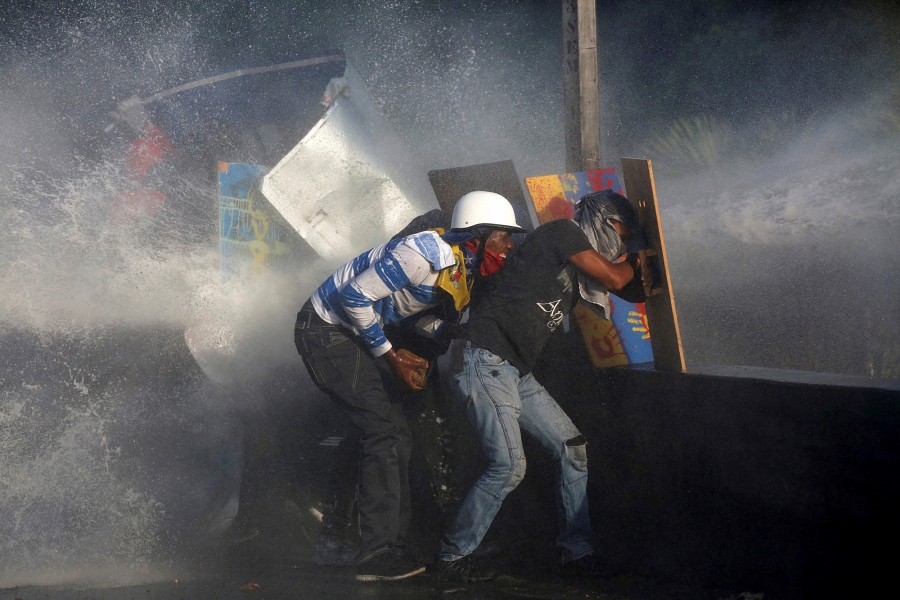 Guns appeared on the streets, and on several occasions, security officials were caught on camera firing directly at demonstrators. Police were targeted with homemade explosives. Opposition supporters burned one man alive. The deaths, injuries and arrests mounted. Over the chaotic months, at least 125 people died, thousands were injured and thousands were jailed.

Global opinion hardened against Maduro. Amid the extraordinary daily events, gangs burst into the National Assembly and beat up opposition lawmakers. The nation’s best-known jailed opposition leader, Leopoldo Lopez, was released from prison and placed on home arrest to the joy of his supporters, then taken back to jail, then allowed home again, all in a matter of days. 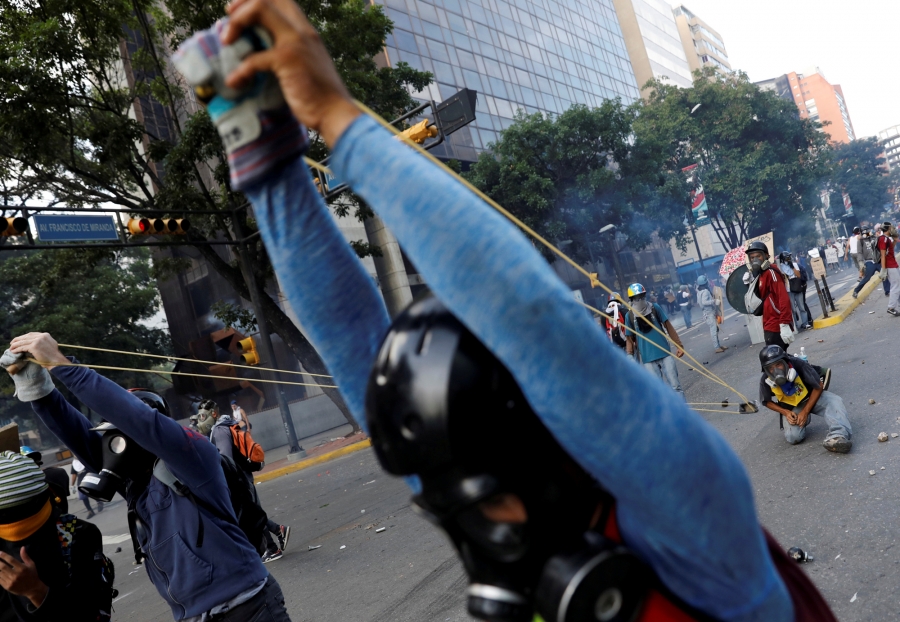 Demonstrators use a giant slingshot while clashing with security forces during a rally against Venezuela's President Nicolas Maduro in Caracas, Venezuela, May 20, 2017.

Venezuelans grew accustomed to navigating their way through barricades and burning streets as they tried to get to school and work. Some days, the country virtually shut down.

By the end of July, many opposition supporters feared for their lives and protest numbers dwindled. Maduro said he was defeating a US-backed coup attempt and authorities held an election, which the opposition boycotted, for an all-powerful Constituent Assembly charged with imposing order on the country.

Having failed to block the Constituent Assembly, the protests fizzled out, leaving opposition supporters nursing their wounds and planning their next moves. 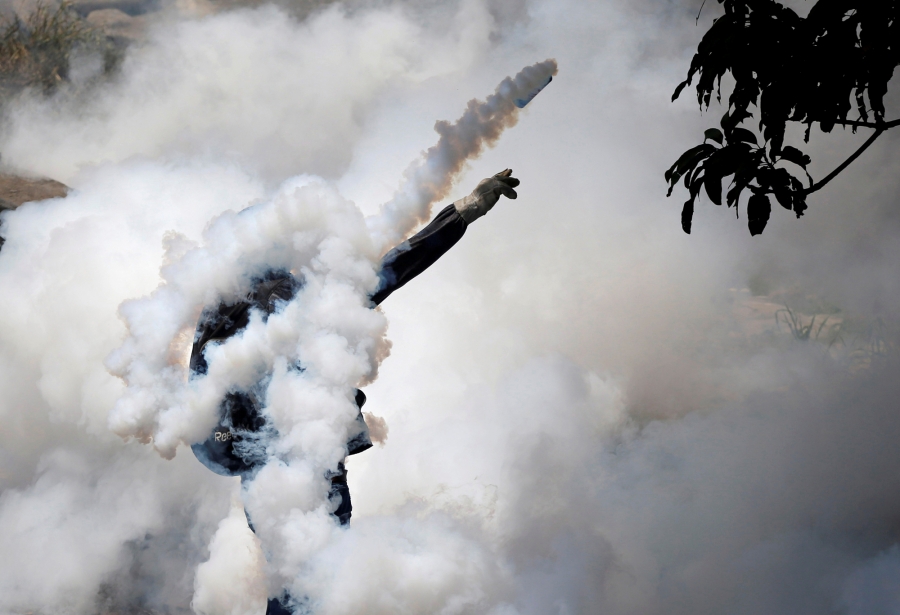 A demonstrator throws back a tear gas grenade while clashing with riot police in Caracas, Venezuela, April 19, 2017.

They decided to tackle Maduro at the ballot box in regional elections in October, but that backfired badly when they lost most of the governorships despite polls showing they would win. The opposition alleged fraud, but their complaints did not get traction and Maduro cemented his authority.

In November, Venezuela said it planned to renegotiate its entire foreign debt, adding another dimension to the deepening national crisis. 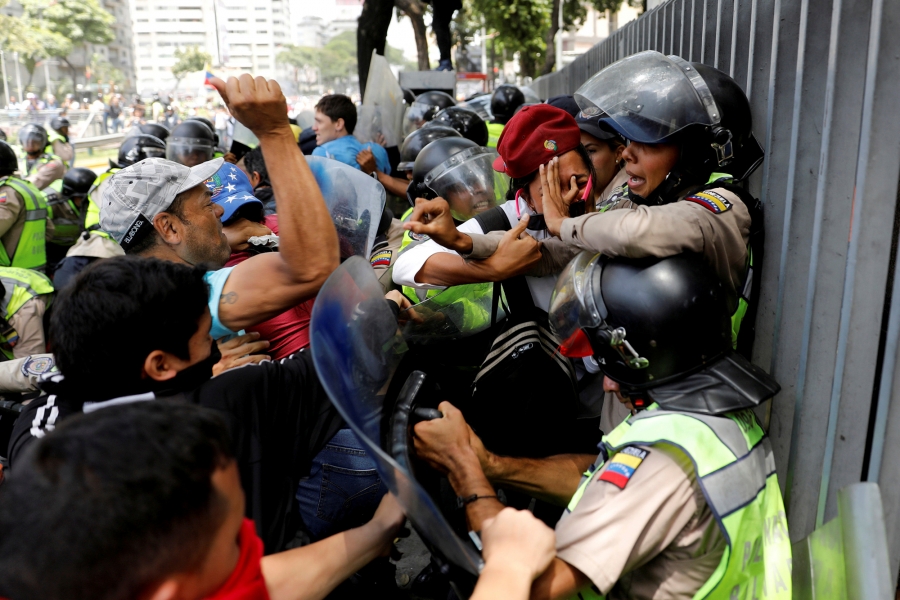 Demonstrators scuffle with security forces during an opposition rally in Caracas, Venezuela, April 4, 2017. The clashes began after authorities closed subway stations, set up checkpoints and cordoned off a square where opponents had planned their latest protest against the government and the crippling economic crisis. 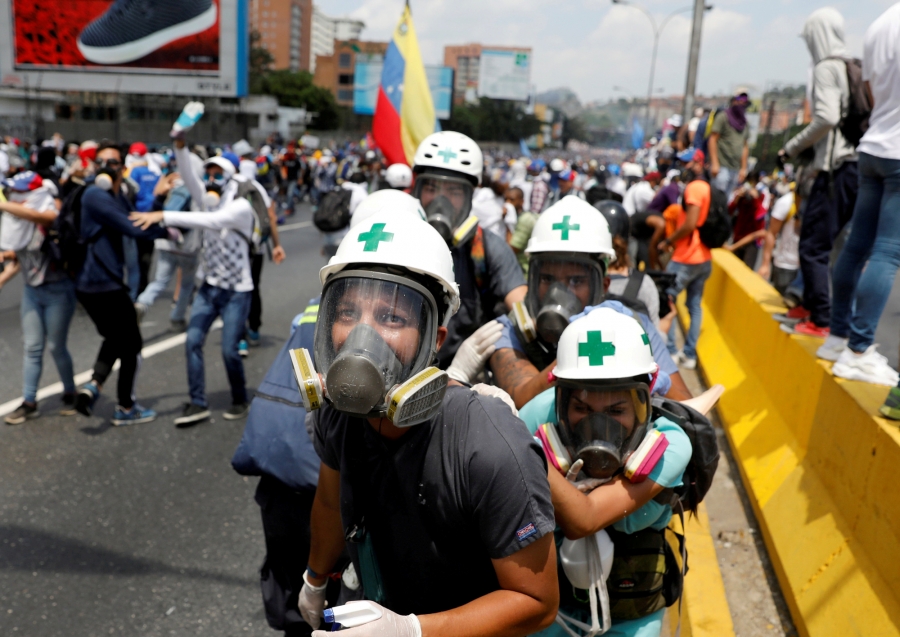 Volunteer members of a primary care response team huddle together during clashes with security forces at a rally against Venezuela's President Nicolas Maduro in Caracas, Venezuela, April 26, 2017. In Caracas, around 120 medical students, doctors and volunteers have revived a primary care response team first created during 2014's bout of anti-government protests. While they wear white helmets with a green cross, none wear flak jackets and some resort to wearing goggles to protect themselves from tear gas. Their equipment has nearly all been donated or bought by the volunteers themselves, and they've had to create makeshift neck braces from shoes, belts and hats. 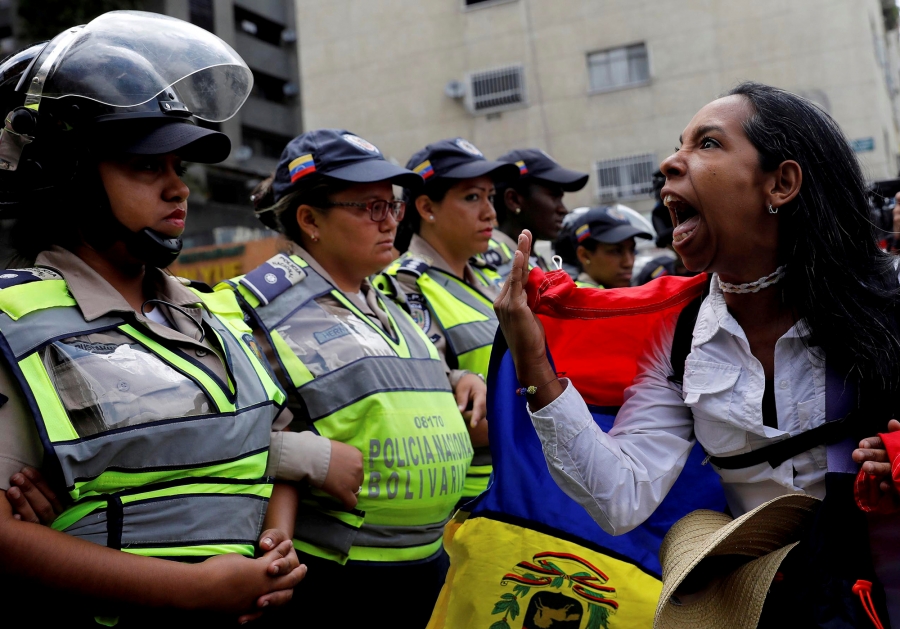 A demonstrator shouts slogans in front of police officers during a women's march to protest against President Nicolas Maduro's government in Caracas, Venezuela, May 6, 2017. The women's marches, which took place in most major cities around the country, were the latest in five weeks of sustained protests against Maduro. In Caracas, marchers sang the national anthem and shouted, "We want elections!" They were halted at various points by lines of policewomen and National Guard troops with armored cars. 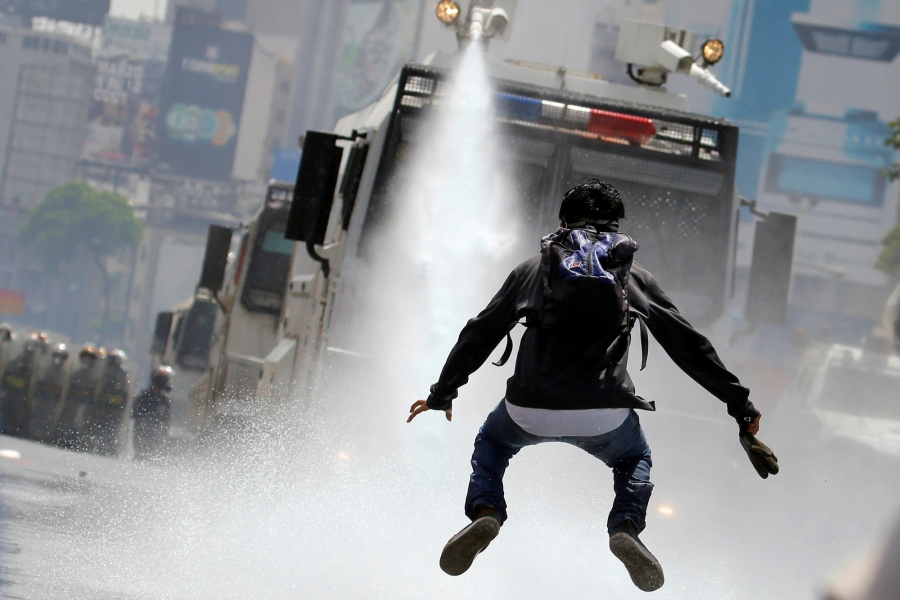 A demonstrator jumps away from a jet of water released from a riot security forces vehicle during a rally against Venezuela's President Nicolas Maduro in Caracas, Venezuela, May 26, 2017. 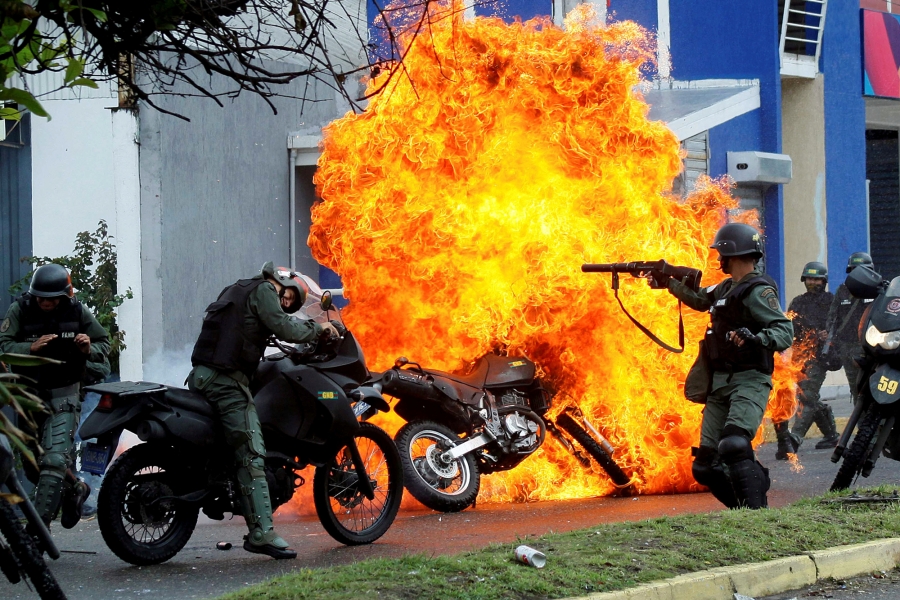 Riot security forces clash with demonstrators as a motorcycle is set on fire during a protest against Venezuelan President Nicolas Maduro's government in San Cristobal, Venezuela, May 29, 2017. 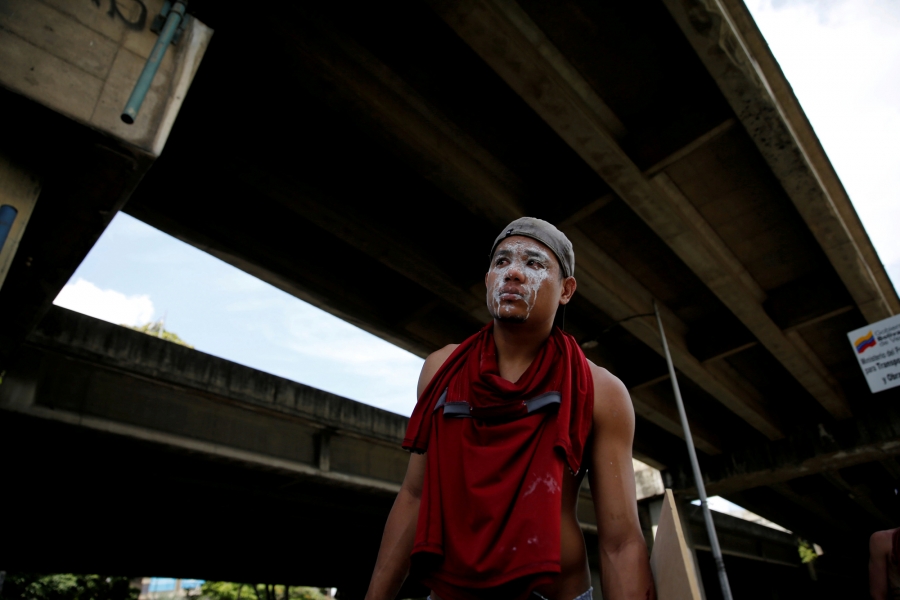 A demonstrator attends a rally against Venezuela's President Nicolas Maduro's government in Caracas, Venezuela, June 19, 2017. Photographer Ivan Alvarado: "I was under the highway photographing some protesters who had surrounded a woman they accused of stealing a phone from someone. I turned around to check what was happening behind me and saw this man appearing from the shadows to see what was going on. The white on his face is salt, which the protesters said helped to reduce the effects of the tear gas." 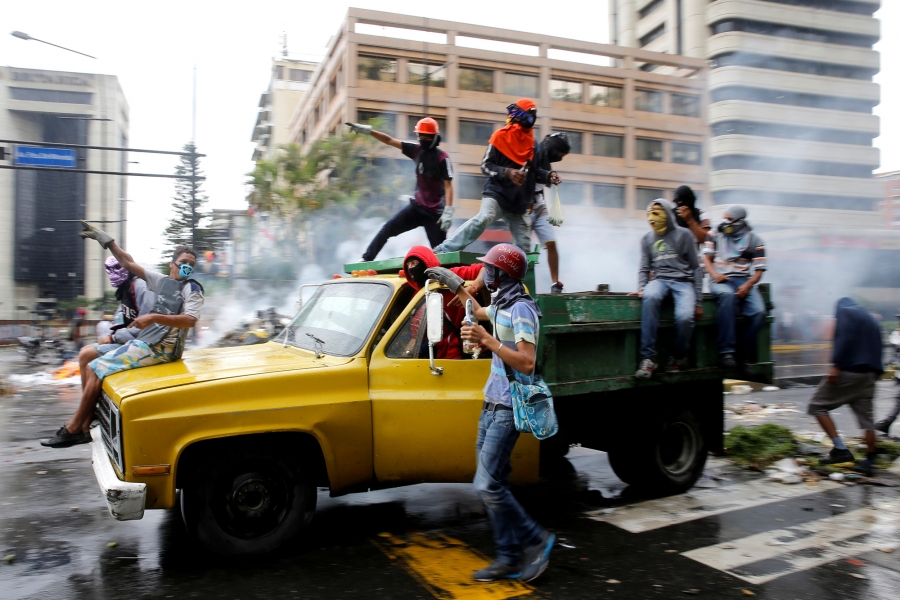 Demonstrators ride on a truck while rallying against Venezuela's President Nicolas Maduro's government in Caracas, Venezuela, June 29, 2017. Photographer Ivan Alvarado: "This was one of the last really big rallies, and the number of protesters coming out on the streets started to decrease. The protesters used trucks to make barricades and block the streets in the Altamira area." 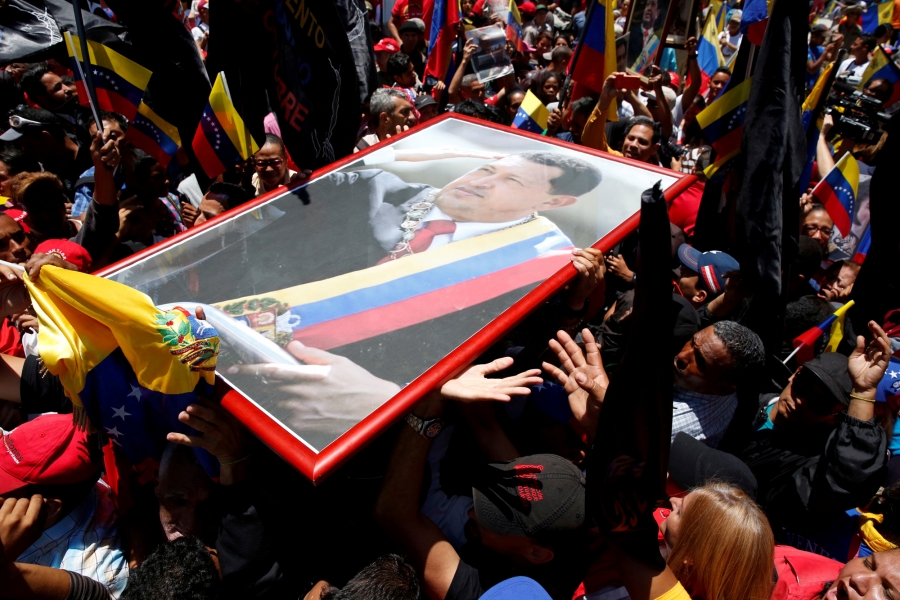 Supporters of Venezuela's President Nicolas Maduro demonstrate outside Palacio Federal Legislativo with a picture of Venezuela's late President Hugo Chavez during the National Constituent Assembly's first session, in Caracas, Venezuela, Aug. 4, 2017. Photographer Carlos Garcia Rawlins: "After winning a majority in the National Assembly in 2015, lawmakers of the opposition removed all images of the late President Hugo Chavez from the main building and gardens. This act was seen by Chavez's supporters as a huge offense and they promised that someday he would be returned and honored again. As soon as the government won the National Constituent Assembly election, the very day of the installation ceremony, elected members and their supporters gathered outside the building and brought images of Chavez back."