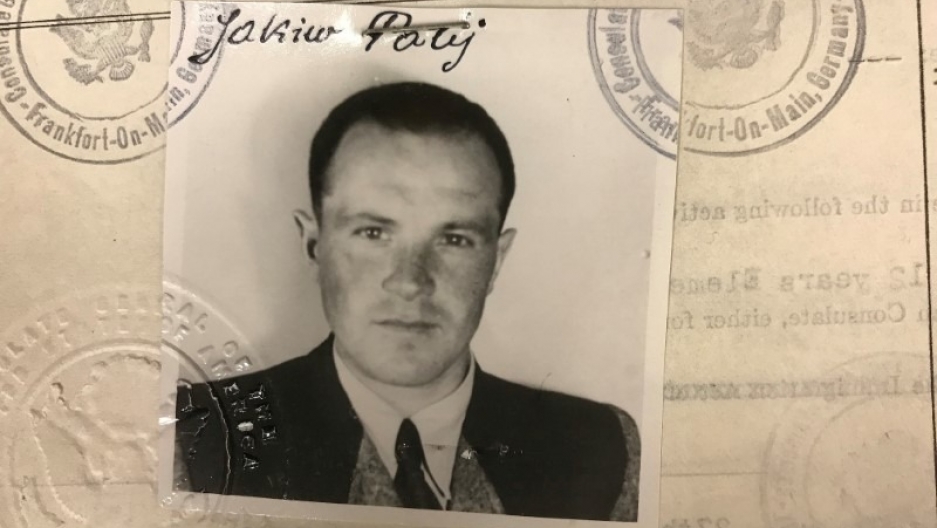 Jakiw Palij, a 95-year-old New York City man believed to be a former guard at a labor camp in Nazi-occupied Poland, is pictured in his 1949 visa photo.

A 95-year-old New York City man believed to be a former guard at a labor camp in Nazi-occupied Poland arrived in Germany after being arrested and deported by US immigration authorities, US officials said on Tuesday.

The White House said Jakiw Palij served as a guard at the Trawniki Labor Camp, where about 6,000 Jewish men, women and children were shot dead on Nov. 3, 1943, in one of the single largest massacres of the Holocaust.

The United States had been trying to get Palij out of the country since the issue of a 2004 deportation order but after talks with top members of Chancellor Angela Merkel's government Germany agreed to take him in.

Related: A high school project reunites twin brothers 74 years after they died on a ship in Normandy

The Frankfurter Allgemeine Zeitung said Palij had arrived by military plane at Duesseldorf airport in western Germany and taken to a home for the elderly in the area.

Born in what was then Poland but is now Ukraine, Palij emigrated to the United States in 1949, becoming a United States citizen eight years later, the White House said.

But, it added, he had concealed his Nazi service and involvement in human rights abuses, saying he had spent World War Two working on a farm and in a factory.

In 2001, Palij told Department of Justice officials that he had trained at the Nazi SS Training Camp in Trawniki, in German-occupied Poland, in 1943, the White House said.

Related: It's so hot in Berlin that people are cooling down in an old WWII bunker

"By serving as an armed guard ... and preventing the escape of Jewish prisoner during his Nazi service, Palij played an indispensable role in ensuring the Trawniki Jewish victims met their horrific fate at the hands of the Nazis," said the White House.

A federal judge revoked his US citizenship in 2003 and he was ordered to be deported in 2004. But no European country would accept him, CNN and New York magazine reported.

Given his age and questions over his health and also a possible lack of proof, it is unclear whether German authorities will attempt to prosecute the stateless pensioner.

The US Ambassador to Germany, Richard Grenell, said the deportation was the result of a concerted effort by US President Donald Trump.

"He [Trump] told me directly to make it a priority, to get the Nazi out," Grenell told reporters. "I felt very strongly that the German government had a moral obligation and they accepted that," he added, making clear it was up to Germany to decide whether to prosecute him.

Germany has a mixed record on convicting Nazi war criminals. Critics say it let many high-ranking Nazis and SS members escape justice only for their juniors, small cogs in the Nazi death machine, to be put on trial decades later.

Related: In Germany, there are growing fears of a rise in anti-Semitism

"Germany, in whose name the worst injustice was perpetrated under the Nazis, is confronting its moral obligations."

After an international military tribunal put some top Nazi leaders, including Hermann Goering and Rudolf Hess, on trial soon after World War II in the Nuremburg Trials, little action was taken by the West German judiciary in the 1950s and 1960s.

Related: For over 90 years, this Holocaust survivor's art has kept him alive

Germany's Central office for the Investigation of Nazi Crimes in Ludwigsburg is still investigating individuals and the 2011 conviction of Sobibor death camp guard John Demjanjuk gave it a new impetus. It was the first time involvement in a camp was sufficient to be found culpable even without proof of a specific crime.