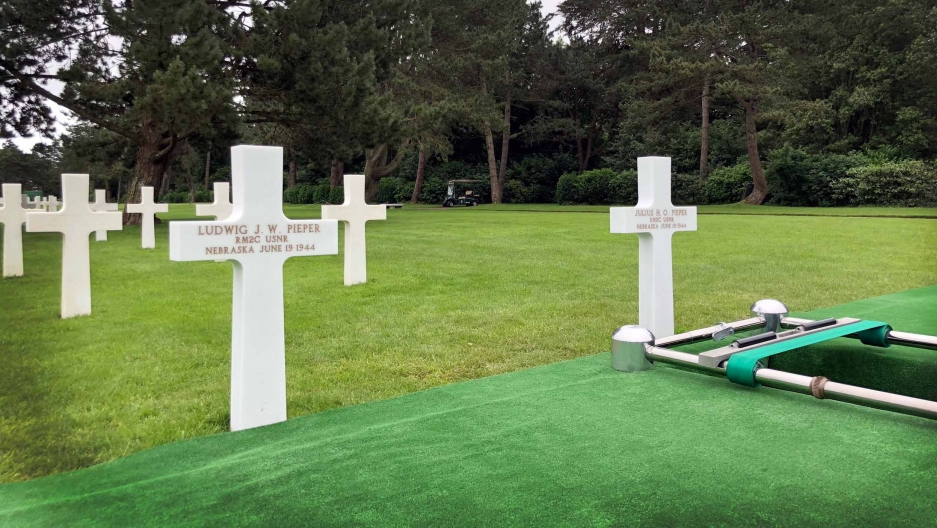 Ludwig “Louie” Pieper's grave was relocated so that his twin, Julius “Henry” Pieper, could be buried beside him.

It’s an overcast summer day at the Normandy American Cemetery. Taps plays as a flag-draped casket is carried to a freshly dug grave. A small group gathers to bury a fallen soldier.

For decades, the remains of this sailor were labeled only as Unknown X-9352. Today, he has his name again: Julius “Henry” Pieper.

Henry is finally getting a proper burial. It’s 74 years after his death, on the exact day his Naval ship was sunk by a German mine during World War II D-Day operations.

But it might be better to call this funeral a reunion. 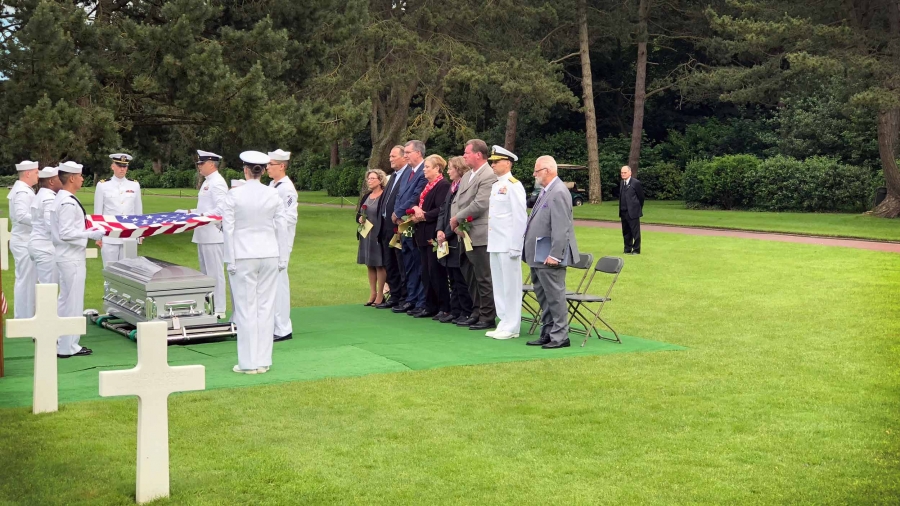 Five of the Pierper twins' neices and nephews attended Henry Pieper's funeral in the Normandy American cemetery. His ceremony was the first since 1956.

Henry’s twin brother, Ludwig “Louie” Pieper, was also on that ship, and they have been separated since their death on June 19, 1944.

The Pieper twins were born to German immigrants in Esmond, South Dakota, and grew up in Creston, Nebraska. Their nephew and namesake, Louis Henry Pieper, says his family always said the twins were inseparable. Once, he says, “They even had twins as girlfriends.”

The twins enlisted in the Navy and trained as radiomen who specialized in communications technology.

Susan Lawrence, their niece, said they were almost deployed separately, but their father wrote a letter to their commanding officer asking to keep them together. 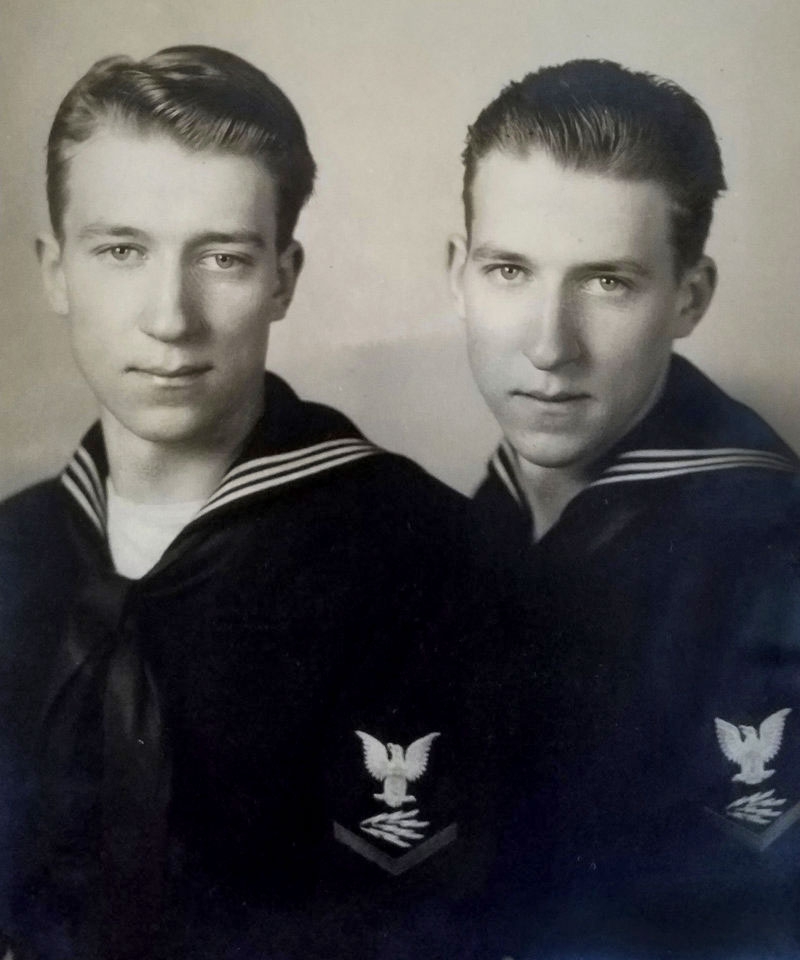 The twins are pictured here in this 1940s-era photo.

On June 19, 1944, two weeks after D-Day, Landing Ship Tank 523 crossed the English Channel sailing to Utah Beach, loaded with soldiers, equipment and weapons. The ship hit a magnetic German mine and sank, taking the 19-year-old twins down with it. More than 100 others died on the ship that day.

Louie’s body was recovered and was buried in France.

But Henry’s body was never found, and his name was placed on the Normandy cemetery Wall of the Missing.

For years, the Pieper family held onto hope that Henry’s remains might one day be found.

“Dad didn’t want to open up an unknown,” he says. “It was always a wound in his heart, not knowing where his brother was, so he never talked about it.”

Susan Lawrence, the twins’ niece, said the family’s only comfort was a letter the twins had written to their parents.

“They had written a letter a couple of days prior to their death that said, ‘Do not worry about us, we are together.’”

Henry might have been lost forever if it weren’t for a high school student, living a couple of hours from his hometown.

In 2015, Vanessa Taylor, then a junior in Ainsworth, Nebraska, was researching fallen soldiers for a school project.

In a phone interview, Taylor said was going through an online list of soldiers from her home state, and she noticed two had the same last name. She wondered if there was a connection.

Taylor got in touch with the twins’ only living sibling, their sister, Mary Anne Lawrence, and learned that Henry was listed as missing in action.

She requested Henry’s personnel file from the Defense MIA/POW Accounting Agency (DPAA), which is tasked with finding missing soldiers.

For decades following his death, Henry’s case was unchanged. But when Taylor made that request, the agency had already begun reviewing cases of buried unidentified soldiers.

Call it fate, or lucky timing, but Taylor’s request sparked an “aha moment” for the investigators.

In 1961, six sets of unidentified remains had been found during the excavation of Henry’s and Louie’s shipwreck, and transferred to the Ardennes cemetery in Belgium.

Researchers made a connection with the personnel file requested by Taylor.

Tim Nosal from the American Battle Monuments Commission called it a “miracle of coincidence.”

In November 2017, the DPAA positively identified Henry’s remains through historical and forensic research.

Vanessa Taylor, now in college, says she never imagined her school project would help make history and bring closure to a family that had suffered for decades.

“We didn’t have, like, super high hopes at that time,” she says. “It’s very special knowing that I had even just a small role in helping bring this about so long after it took place in the war.”

Five nieces and nephews of the twins came to Normandy for the ceremony honoring uncles they only knew through family stories.

This is the first time they have visited the American Cemetery. There are more than 9,300 graves of US soldiers here.

From the green, tree-lined fields of graves, a guide pointed out to the family where the twins’ ship went down.

When the military had asked where they would like Henry to be buried — overseas or back home in Nebraska — the family asked if he could be buried with his twin brother, Louie. So the American Battle Monuments Commission, which oversees military cemeteries, relocated Louie’s grave so the twins could be side-by-side.

A month before Henry’s funeral, the twins’ last living sibling, Mary Anne Lawrence, died at age 88. But her daughter, Susan Lawrence, says she knew her brothers would finally be reunited.

“For her, it was like the biggest burden lifted off her shoulders. It was like she was just carrying it all this time,” she says. “What happened to the brother and to have him identified, to know that he’s found, it was the biggest blessing.”

Mary Anne had also served in the Naval Reserve in the WAVES program. Her daughter placed a picture of her in uniform on Henry’s casket.

Henry’s burial is the first Normandy interment since 1956. At the end of WWII, Nosal from ABMC says there were about 79,000 Americans listed as MIA. Many have since been identified, he said, but some 72,000 are still listed as missing.

“There’s a strong message here for the world of what these men sacrificed for,” he says, “and that message is carried because each and every one of them helps build that message.”