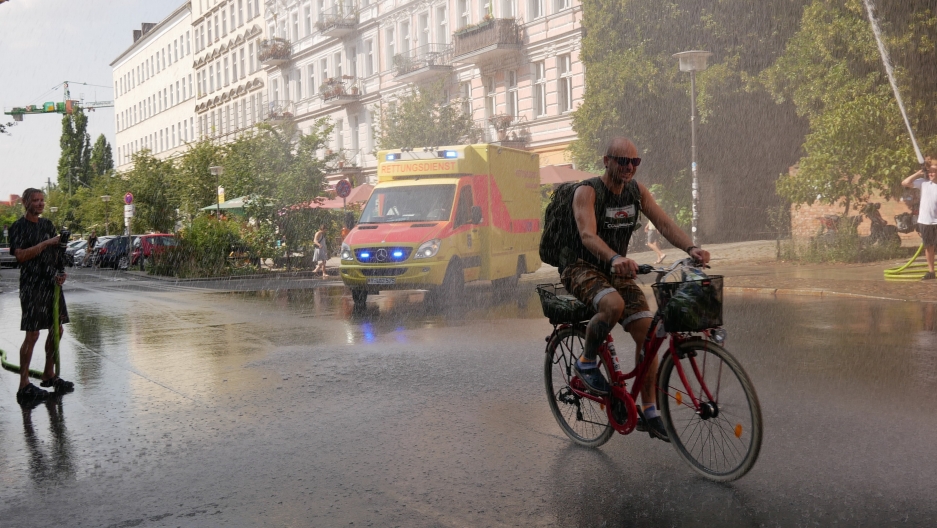 Firefighters blast water in Berlin in mid-August, providing relief from the heat. This is among the few ways to cool off in a city with little air-conditioning.

On a hot August morning, tour guide Carsten Dedert leads a group of tourists to the entrance of a German anti-aircraft fortress known as a Flak Tower. When this building stood intact during World War II, each of its four towers was mounted with a 27-ton gun to shoot down Allied aircraft. Civilians also used the building as a shelter during air raids.

“This is the main reason the ceiling above your head was built quite thick,” Dedert tells visitors. “Nearly 12 feet.”

Today, the thick ceiling and concrete walls provide another form of protection: from an oppressive heatwave that has struck a city with little air-conditioning.

Dedert is a guide with the Berlin Underworlds Association, which restores and guides tours through the city’s buried historical sites, including this ruin of a bunker.

“Germany thankfully lost the Second World War,” he says. “Germany and Berlin were demilitarized and the bunkers blown up.”

British and Russian forces obliterated the other two Flak Towers after the war. But French forces only partially destroyed this one in Berlin’s Humboldthain Park in 1948. Dedert leads his group down a cavernous concrete staircase that ends over an empty shaft filled with rubble and tangled steel rebar. With each step they descend, the temperature drops; Dedert estimates it gets as low as about 46 degrees Fahrenheit.

Coping with the heat

Cold places are at a premium this week in Berlin. The daily Berliner Morgenpost has named the Flak Tower as one of the top five cold things to do in the city. Other ideas include the frigid penguin house in the city zoo and a newly opened ice bar where you can borrow a parka while you shiver.

Derk Ehlert, a spokesman for Berlin’s environment department, says he doesn’t know how many buildings in the city have air conditioning. Instead, he suggests cooling off in parks or in some of the city’s many lakes.

But that wasn’t enough for Jesse Pinho, who moved from Chicago to Berlin two years ago. The heat has bowled him over. So, he made a crowdsourced map of air-conditioned spots in the city and called it Kalte Karte, German for Cold Map.

By early August, he has found about 130 places in a city of 3.6 million residents.

Over the past four days, Pinho says he’s received more suggestions and his list has doubled. It includes some supermarket chains, malls, hotels and movie theaters.

“I think this is how I’m going to have to spend my evenings for the rest of this heatwave, just watching movies,” he says.

Pinho works at a startup in Berlin. He says his bosses have told employees to work from home on the hottest days. Half of his colleagues are German and he says they rarely complain about the lack of air conditioning.

Maybe, he says, they’re onto something.

“In the US, the approach to air conditioning is that it’s very overpowering and we want to feel like we have dominated nature and like made our mark in it and like we’ve made a safe space for humans,” Pinho says. “And here we feel a lot more in touch with the weather outside.”

A dark relic becomes an oasis

As the tour through the Flak Tower ends, Camilla Sundborger, a tourist from Sweden, says she visited all four sites Berlin Underworlds offers over six days in the city, including a replica of a tunnel dug to smuggle East Berlin residents into the West during the Cold War.

“My boyfriend is very interested in this,” Sundborger says. “But also, since it’s so hot outside we wanted to be a bit cooler.”

Dedert, who grew up in Germany, says he does not think too much about the temperature while he guides visitors. He is focused on getting across the history of the site and the mechanics of its weaponry. Asked if the Flak Tower could be a refuge for Berlin residents suffering in the heat, Dedert was quick to say no.

“Why? Because it’s a bunker,” Dedert says. “At least for the next 10-15 years, there are even people alive who went into the bunkers in the Second World War. Perhaps raising too bad memories.”

But for tourists this week, this remnant of a dark past is an oasis.