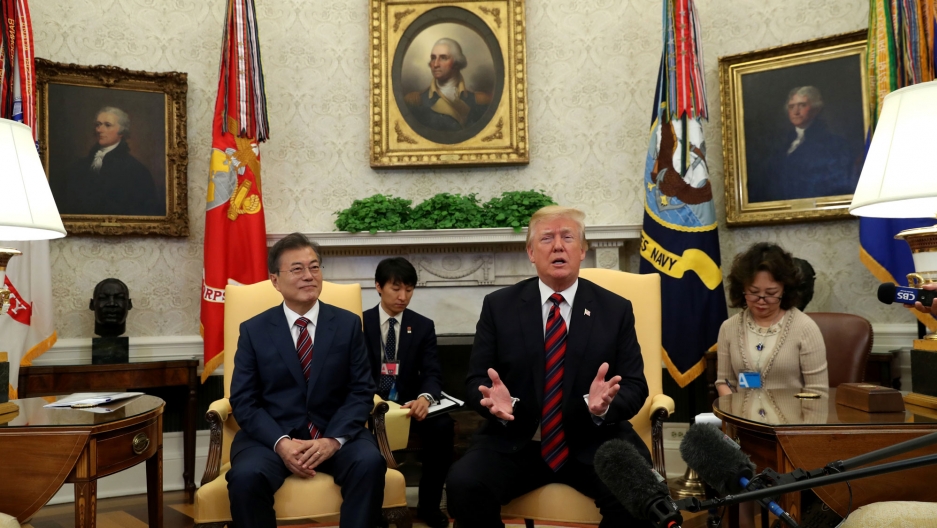 US President Donald Trump welcomes South Korea's President Moon Jae-In in the Oval Office of the White House in Washington, DC on May 22, 2018.

Last night was likely a sleepless one for South Korean President Moon Jae-in.

After Moon had spent months rekindling a relationship with North Korea, President Donald Trump on Thursday abruptly called off a June 12 summit with Kim Jong-un. The announcement — made publicly and apparently without prior notice to Moon — came just two days after the South Korean president preened Trump with high praise at the White House.

Now, it appears Moon might have spoken too soon.

“All of this was possible because of you, Mr. President,” Moon had stated. “And I have no doubt that you will be able to complete — accomplish a historic feat that no one had been able to achieve in the decades past. I have to say that the fate and future of the Korean Peninsula hinges on this.”

For a president who pinned much of his first term on improving inter-Korean relations, Moon continuously undercut himself by redirecting credit to Trump. One South Korean newspaper called Moon’s praise for Trump “fulsome.” And as Moon’s policy of engagement appears to hit a roadblock, another South Korean paper astutely implied that the White House remains unharmed — it continues to sell commemorative US-North Korea summit coins “like hot cakes.”

Related: With cancellation, Trump-Kim summit gets a dose of reality

“Nothing was promised in Washington, DC, but the words that were exchanged and Trump’s overall view was still rather optimistic,” said C. Harrison Kim, an assistant professor at the University of Hawaii at Manoa who researches North Korea. “In a way, the cancellation does look kind of embarrassing. But I bet the Moon government thought this was a possibility.”

At first, Moon faced ridicule when he made extensive concessions to North Korea during the Pyeongchang Winter Olympics, such as paying $2.64 million to host North Korea’s delegation and pressing South Korea’s women’s hockey team to join forces with the North. At the time, many South Koreans accused Moon of being overly eager to please Kim Jong-un. But when public opinion flipped in favor of Moon and renewed engagement, some called for the South Korean president to receive a Nobel Peace Prize nomination — which Moon in turn deflected to Trump, further stroking the US president’s ego.

“I understand the impulse to encourage the process to keep moving forward and to appeal to Trump’s ego,” said Jenny Town, managing editor of analysis site 38 North and former assistant director of the US-Korea Institute at John Hopkins University. “But the way that Moon was doing it was beyond necessary. Frankly, it was ingratiating and a little hard to watch.”

Now, the canceled summit “makes Moon Jae-in look very bad,” Town said. “This is a huge loss for him in terms of the legacy of his presidency, because he put so much emphasis not only on having the summit but being able to broker US-DPRK talks, as well.” 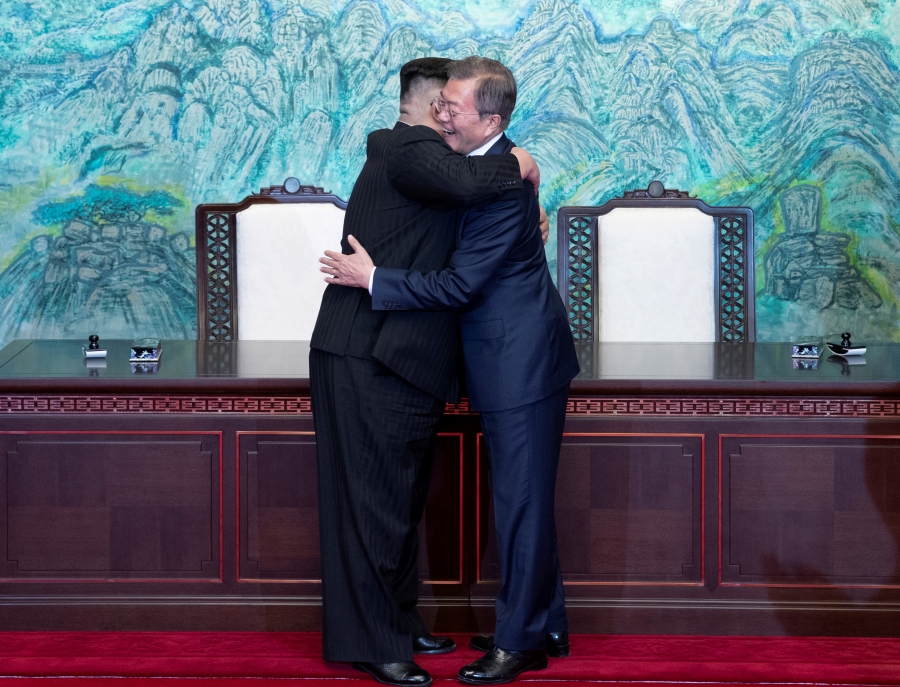 Moon enjoyed astronomical approval ratings during the height of excitement in Seoul, when citizens camped out at City Hall and watched Moon and Kim hug at the April 27 inter-Korean summit. Hopes were high then. But now, Moon might be falling from grace — if engagement headlines fade, citizens are left to grapple with many of the domestic issues the South Korean president has so far ignored.

“From the very start, the Moon government has wanted to make sure that [inter-Korean relations are] its signature project, but it has been neglecting big issues like labor rights — minimum wage, pension plans, employment laws,” C. Harrison Kim said. “That has been a constant criticism of the Moon government.”

Can the show go on?

Hours after the summit was canceled, North Korea unexpectedly announced that Kim Jong-un is still willing to meet Trump.

Peter Ward, a Seoul-based columnist for NK News and a former researcher at the Asan Institute, laid out a number of motivations: Kim Jong-un could be trying to set a calm tone to avoid a US military strike — or he could be playing the “good guy” role to make the US look responsible for the crash and burn of negotiations. By exclusively blaming the US, Kim would be signaling to China and South Korea that it’s not North Korea’s fault — an attempt to keep the more recently-established, friendly relations intact.

“I thought the tone of their response was very interesting,” Ward said. “It looks like North Korea is asking the US to come back to the negotiation table, but it’s not really clear what’s going on.”

Shutting the summit down no doubt makes the US look uncooperative. Trump made the announcement within hours of North Korea destroying its only nuclear facility before an audience of international journalists. It further adds to North Korea’s image as a benevolent negotiator, all while Trump walks away because he may not strike a perfect deal.

Nevertheless, it’s possible that the damage of a canceled summit is irreversible at this point — which would amount to a huge failure for Moon. While Trump characterized the summit cancellation as a tragic missed opportunity, he also reverted to his old tactics of threatening war. “You talk about your nuclear capabilities, but ours are so massive and powerful that I pray to God they will never have to be used,” Trump wrote in a letter addressed to Kim. Somewhat ironically, Trump also blamed the summit cancellation on North Korea’s “tremendous anger and open hostility.”

“He’s still threatening North Korea. This isn’t a good negotiation tactic — North Korea is going to play hardball right back,” Town said. “It would be very difficult to salvage the summit at this point even if both sides have left the door slightly open, as it will take one side to swallow its pride and make a first concrete proposal.”

Then again, Trump and Kim managed to schedule a summit even after slinging insults like “little rocket man” and “dotard” at each other last year.

Already, Trump responded positively to North Korea the day after calling the summit off. “Very good news to receive the warm and productive statement from North Korea,” he tweeted. “We will soon see where it [leads], hopefully to long and enduring prosperity and peace.”

Very good news to receive the warm and productive statement from North Korea. We will soon see where it will lead, hopefully to long and enduring prosperity and peace. Only time (and talent) will tell!

“Maybe — just maybe — this is only a delay. On the surface, it looks like it could continue dialogue and maybe a summit will happen later,” Ward said. “For all the bad things you could say about Trump, he’s a pragmatist at heart and he’s not particularly interested in ideology. If he sees a summit working for him, he might as well go ahead with it.”

In the meantime, there’s at least hope for inter-Korean relations: South Korean Unification Minister Cho Myoung-gyon stated on May 25 that the Moon government will carry on with the Panmunjom Declaration penned at the inter-Korean summit in April. That means that South Korea will still pursue an official end of the war.