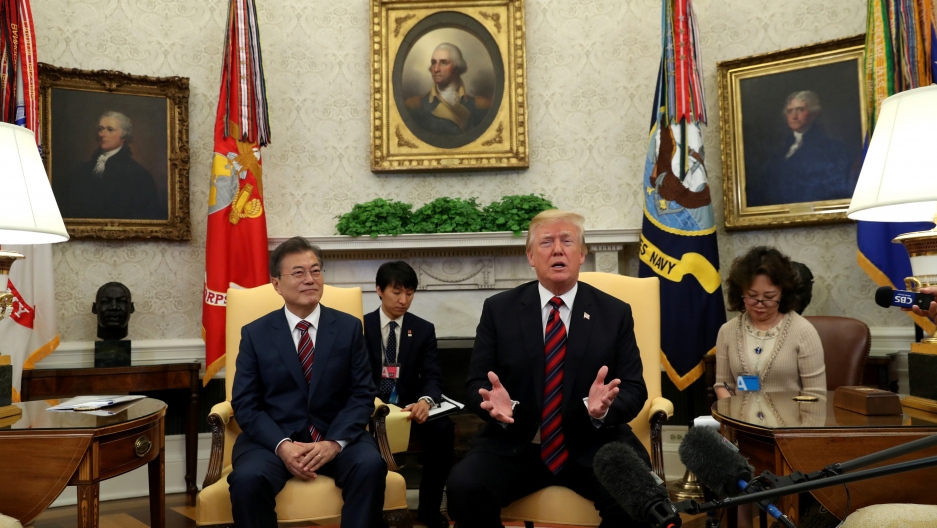 US President Donald Trump welcomes South Korea's President Moon Jae-In in the Oval Office of the White House in Washington, DC, May 22, 2018.

After days of growing uncertainty, President Donald Trump on Thursday canceled a much-hyped summit with North Korea, writing in a letter to its leader, Kim Jong-un, that the world “has lost a great opportunity for lasting peace.”

But in televised remarks shortly afterward, Trump said “it’s possible” the meeting, which was scheduled to take place June 12 in Singapore, “could take place, or a summit at some later date."

“Nobody should be anxious,” he added. “We have to get it right.”

Sadly, I was forced to cancel the Summit Meeting in Singapore with Kim Jong Un. pic.twitter.com/rLwXxBxFKx

The cancellation has eased the anxiety of foreign policy and nuclear nonproliferation experts who told PRI that Trump had rushed headlong into a meeting unprepared. Ever since Trump accepted Kim’s invitation to meet in March, experts warned such a high-level dialogue would go south without a specific and careful diplomatic strategy.

“I was surprised, but it was mixed with some relief,” says Evans Revere, a former senior State Department official who negotiated with North Korea during the George W. Bush and Bill Clinton administrations. “I’ve been looking at the upcoming summit with increasing concern. … We were going to a summit with the North Korean leader with the expectation he had made the strategic decision to eliminate its nuclear program, when he had done no such thing.”

The stark differences between expectations and reality — along with the mixed messages — have been a recurring theme of negotiations with the North Koreans for years, Revere says. In preparing for next month’s summit, neither side could ever seem to agree why they were meeting. And senior officials in both the US and North Korea have chosen to use phrases fraught with multiple meanings.

For one thing, mentions of a “Libya model” by National Security Adviser John Bolton, Vice President Mike Pence and Trump himself were likely interpreted by North Korea to mean the Americans were seeking denuclearization followed by regime change. Those remarks drew Pyongyang’s ire and may have torpedoed pre-summit dialogue.

For another, North Korea and the US have totally different definitions of denuclearization — which was the summit’s No. 1 priority.

Libya’s nuclear weapons program was not nearly as advanced as North Korea’s when leader Muammar Gaddafi in 2003 voluntarily promised the US and United Kingdom he’d give it up, explains Kelsey Davenport, a nonproliferation expert at the Arms Control Association in Washington, DC. Gaddafi invited inspectors to dismantle Libya’s nuclear facilities, after which the US and other countries lifted sanctions.

But to North Korea, Davenport says, the Libya model “carries a lot of negative connotations.”

“Just a few years later, Muammar Gaddafi was overthrown by military action that was supported by the US and its NATO allies,” she says. Never mind that the regime change — and Gaddafi’s subsequent murder — had little to do with Libya’s nuclear program.

Trump, she adds, “certainly misunderstands the Libya model. ... And at a press conference, he essentially said that if North Korea does not give up its nuclear weapons then the United States will use the Libya model and essentially destroy North Korea. That sends exactly the wrong message to Kim Jong-un about US intentions — basically that anything short of denuclearization could result in the overthrow of the regime.”

Of course, one of the main reasons North Korea has built its nuclear arsenal is to avoid the fate of a country like Libya. Just last month, Kim described his country’s nuclear force as a “miraculous victory” and a “treasured sword for defending peace.”

North Korea seems unwilling to denuclearize in the first place — at least, not as the US interprets the term. To American negotiators and Trump, denuclearization means the complete dismantling of North Korea’s nuclear program.

But North Koreans have typically spoken of their “willingness” to “denuclearize the Korean Peninsula,” a specific phrase with a very different meaning, Revere explains.

“That phrase is a very familiar one to Americans who have negotiated with the North Koreans. They’ve used it many times over the years,” he says. “It means the elimination of the threat to North Korea posed by American troops in South Korea, the US-South Korea alliance and the US ‘nuclear umbrella’ that defends South Korea and Japan.”

“If you remove those three elements of the threat, perhaps in 10 or 20 years they might be able to consider the possibility of denuclearization,” Revere adds. “That’s the North Korea definition.”

The Singapore meeting would have been the first face-to-face meeting between a sitting US president and North Korean leader.

Signs it would be called off have been bubbling for days. Last week, the North Koreans threatened not to come if the US forced it to dismantle its nuclear program.

Related: North Korea threatens to pull out of summit with Trump, suspends talks with South

And Wednesday, Trump said, “There’s a substantial chance that it won’t work out.”

The cancellation came a day after a vice minister in the North Korean Foreign Ministry called Pence a “political dummy” and threatened a nuclear showdown if in-person dialogue with the US failed. And just hours before Trump’s announcement, North Korea invited international journalists to observe the demolition of its only known nuclear testing site, Punggye-ri, ahead of the planned summit.

Foreign policy experts tell PRI the cancellation — or postponement — could be a good thing. There had been worry Trump was susceptible to North Korea’s longstanding tactic of empty promises.

“Trump is walking into this elaborate trap unprepared,” Sung-Yoon Lee, professor of Korean studies at the Fletcher School at Tufts University, told PRI last month. “And I fear that President Trump will fall for that and come away from his meeting with Kim Jong-un thinking that he has tamed Kim Jong-un, and thereby relax sanctions.”

Revere says it’s better for the summit to fall apart now than for it to take place and go wrong. Though he calls the summit “a downright bad idea,” one silver lining has been the opening of diplomatic channels between the US and North Korea.

“You don’t see very much discussion of military options and a ‘bloody nose’ anymore. There is a focus by all parties on diplomacy,” he says. “There are talks, quietly and privately, at a high level, and that’s something I and others have been calling for. … But we didn’t need to commit to a summit in order for that discussion to take place.”

Related: A Trump-Kim summit would be historic too, but can it succeed?

And if nothing else, postponement gives the US more time to prepare for a meeting that breaks all policy conventions, says Victor Cha, a former top adviser on North Korea to George W. Bush who is now a professor at Georgetown University’s School of Foreign Service.

“In one sense, the instincts of the administration are right in that the only way you can move North Korea off this very consistent position over the last 30 years is if the leader of the country himself makes a decision,” Cha says. “But at the same time ... this would take months if not years of negotiations to be confident for the president to walk into a meeting and say yeah, the North Koreans are going to do what we want them to do.”