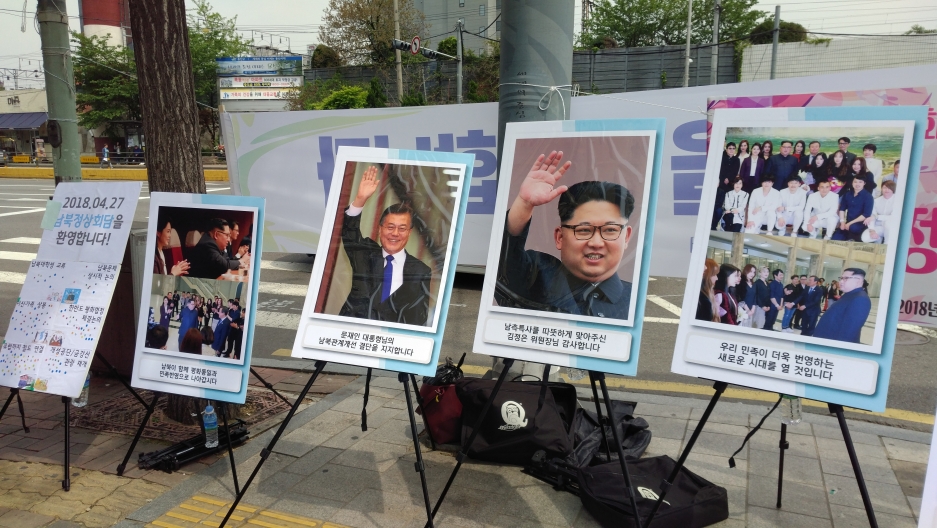 Positive signs celebrating the inter-Korean summit are seen near Seoul Station the day before on April 26, 2018.

“We came here today to pray for the success of the summit — because we have to be united, North and South,” said 57-year-old Ahn Seung-moon, with a grin on his face. “Most Korean people here are excited for a new era of reunification and peace."

After a long day of ceremonious pleasantries at the inter-Korean summit on April 27 — which included planting a symbolic peace tree and a multicourse dinner — Moon and Kim stood side-by-side and announced the “Panmunjom Declaration.” In sum, the declaration says that North and South Korea will end the war this year, that Moon Jae-in will visit Pyongyang this fall and that both nations have a “common goal of realizing, through complete denuclearization, a nuclear-free Korean peninsula.”

For now, it’s all just promises without a clear, step-by-step plan. Even so, many are still holding out hope.

“This is a turning point for the end of the war,” said Yoon Ki-ha, a 58-year-old peace demonstrator. “We’ve lived as divided nations for such a long time. This is our opportunity for the two Koreas to reunify and enter peaceful negotiations.”

Friday's inter-Korean summit was the first time since the Korean War’s 1953 ceasefire that a North Korean ruler has crossed the demarcation line into what is technically South Korea. Starting with a whirlwind of diplomacy during the Pyeongchang Winter Olympics last February, it appears that the Koreas have officially swapped last year’s bluster for a highly public pursuit of better relations.

The transformation is shocking: In just four months, North and South Korea went from cut phone lines and chronic worry about war to publicly laughing about one of their most taboo disagreements — nuclear weapons.

“I will make sure not to interrupt your sleep any more,” Kim reportedly joked to Moon at the summit on Friday morning, making reference to North Korea’s recent promise to suspend missile tests.

Though nearly 65 years have passed since the Korean War halted in ceasefire, many South Koreans still have a deep stake in whether or not it ends in peace. Sitting at a Buddhist festival just a few yards from the peace demonstrators, Jang Hye-song, 71, said she could “feel the atmosphere of reunification” at last. Quietly, she revealed that she’s from North Korea’s North Pyongan Province, an area that closely borders China. When Jang was 2 years old, her family fled to the South — and her mother suffered a permanent wound in the process. 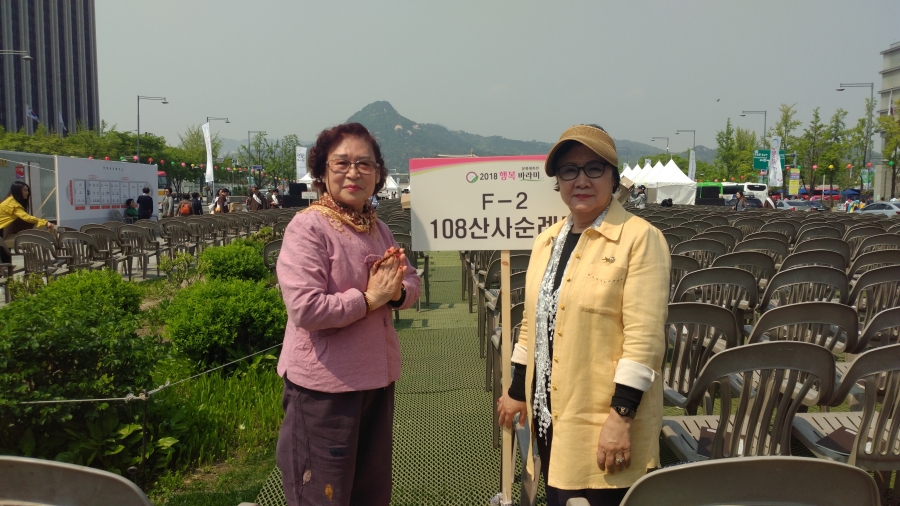 Ha Sa-jin, 70 (left), and Jang Hye-song, 71 (right), stand in Gwanghwamun Square in front of a Buddhist festival on the day of the inter-Korean summit on April 27, 2018. Jang fled from North Korea with her family when she was 2 years old and hopes to see if her relatives are still alive in the near future.

“I remember taking a bath with my mom when I was a kid, and seeing a hole in her back. She said that she got it from [sharp debris] while swimming across the Imjin River [to South Korea], and while she was carrying me on her back,” she said. “My mother died last year at the age 90, but I am still — and as soon as reunification happens, I would like to see if any of my relatives in North Korea are still alive.”

In Seoul, emotions are certainly high as images of Moon and Kim hugging each other verge on inconic. But peace and denuclearization are far from complete, and history casts doubt on what could happen next. In 1994, the US promised to send North Korea oil and other aid so long as North Korea stopped working on nuclear reactors (which Washington rightfully suspected was for its nuclear weapons program). That “Agreed Framework” fell apart, as did the results of a 2000 summit that won former South Korean President Kim Dae-jung a Nobel Peace Prize. In the end, a 2007 meeting between North and South Korean rulers in Pyongyang yielded a “peace pledge,” but turned out to be equally as fruitless.

“The excitement is natural, but we also have to resist it because we need to focus more on the intermediary steps to get to [denuclearization],” said Tom Collina, director of policy at the Ploughshares Fund, which focuses on global security and nuclear issues on the Korean peninsula. “But every step we take along the way to the ultimate goal should make us safer, reduce tensions and reduce risks. The process itself is valuable, even if we don’t get to the goal."

Trump and Kim are expected to meet one-on-one at an upcoming summit slated for some time in May or June (the location and date are still undecided). But nuclear weapons likely won’t be given up then, either — trust has to be built in small, bartering steps between the Kim, Moon, Trump and other players first, Collina said. And even when a deal is reached, the actual process of dismantling facilities and monitoring nuclear supplies takes longer than most people would expect.

“The reason why North Korea has [nuclear weapons] is because they’re concerned about their security, and they see them as a guarantee of their security,” he said. “No one is going to push in all their chips at once without getting anything in return. Everyone has to put in a little bit, get a little bit back — build confidence that it’s working.”

For now, North and South Korea are embarking on a long list of big promises, and it’s impossible to know what the outcome will be. The sudden diplomacy from North Korea could unravel as a deceiving ploy to end economic sanctions — or it could fall apart as a deal-gone-bad if all negotiating parties don’t come to a consensus. There’s also the possibility that North and South Korea are on the verge of lasting peace and denuclearization, at last putting an international conflict to bed.

Among analysts and academics, that difficult dynamic of both hope and skepticism has been frequently described as “cautious optimism.” But on the day of the inter-Korean summit, some South Koreans were willing to venture far beyond that, into a state of unbridled enthusiasm for the future.

“I’ve been worried about not seeing peace before I die, but this [summit] happened before I got even older,” Ha Sa-jin, a 70-year-old Seoul resident, said while sitting on a bench on the day of the summit. “I’m so happy that I can’t even swallow food these days.”

Jisoo Hong contributed to this report.