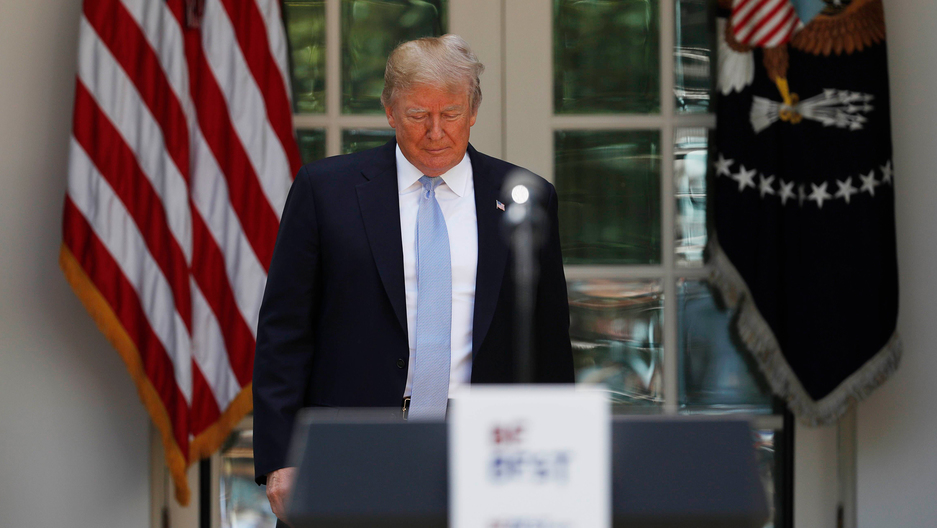 President Donald Trump arrives in the Rose Garden at the White House in Washington, DC, May 7, 2018.

US President Donald Trump is expected to announce on Tuesday that he is pulling out of the Iran nuclear deal, European officials said, after they struggled to persuade him that the accord has halted Iran's nuclear ambitions.

Related: A nuclear deal won’t change Iran overnight, but it is better than the alternative

One senior European official closely involved in Iran diplomacy said US officials had indicated late on Monday that Trump would withdraw from the deal but it remained unclear on what terms, and whether sanctions would be reimposed.

A senior Western diplomat said France, Britain and Germany — which were also party to the agreement — were working on the assumption of a hard US exit after a call last week between US Secretary of State Mike Pompeo and European officials at which he made clear talks on rescuing the deal would not go further.

"He let it be known that it was over," the diplomat said.

European officials understood this to mean that Trump would not renew sanctions waivers, a move which would in effect kill the deal.

Trump planned to discuss his decision in a phone call on Tuesday with French President Emmanuel Macron, a senior White House official said.

Trump has consistently threatened to pull out of the 2015 agreement because it does not address Iran's ballistic missile program or its role in wars in Syria and Yemen, and does not permanently prevent Tehran from developing nuclear weapons.

European leaders have warned that a US withdrawal would undo years of work that has kept nuclear weapons out of Iran's hands.

Related: A history of US-Iran relations

In Washington, the Republican chairman of the US House of Representatives Foreign Affairs Committee said the United States should continue to fix flaws in accord and "enforce the hell" out of it, but not withdraw.

Speaking hours before Trump was due to announce his decision, Ed Royce said tearing up the deal would not recover cash sent to Iran's government or "galvanize" allies into addressing Iran's dangerous activities.

"I fear a withdrawal would actually set back those efforts," he said in a statement.

"I think in Washington it was quite clear the president was convinced that Trump was heading to a negative decision so we have been preparing more aggressively the hypotheses of a partial or total pullout," the French official said.

Several European officials stressed they had no concrete information and Trump could still change his mind.

Related: How Donald Trump’s presidency will affect the Middle East

Such a move could ratchet up tensions in a region riven with interrelated wars, including the multi-layered conflict in Syria where Iran's presence has brought it into conflict with Israel.

A decision to quit the deal could also rattle oil markets due to Iran's role as a major exporter, and critics say it could also harm Trump's efforts to reach a deal in nuclear talks with North Korea, a prospect he has dismissed.

"This deal ... is a factor of peace and stabilization in a very eruptive region," French Defense Minister Florence Parly told RTL radio.

Iran suggested its economy would not be hurt whatever happened, but its rial was near record lows against the dollar in the free market as Iranians tried to buy hard currency, fearing financial turmoil if Trump quits the deal.

"We are prepared for all scenarios. If America pulls out of the deal, our economy will not be impacted," central bank chief Valiollah Seif said on state television.

'Stand on our own feet’

"One man in one country might create some problems for us for a few months, but we will overcome those problems," President Hassan Rouhani said. "If we are under sanctions or not, we should stand on our own feet."

Related: How the power balance in the Middle East will shift as Iran is freed of sanctions

It would be a severe mistake for Iran to stay in the nuclear deal if the United States leaves it, said senior hardline official Mohammad Javad Larijani, head of the Iranian Judiciary's Human Rights Council, Tasnim news agency reported.

Even before the latest standoff, a raft of business deals including plane purchases have been delayed amid bankers' concerns that the nuclear deal could unravel or that they could fall foul of US financial controls.

Whatever Trump's decision, those concerns are unlikely to ease any time soon as the fallout from weeks of uncertainty and the appointment of a more hawkish US foreign policy team expose underlying obstacles, bankers said.

The deal, negotiated during the administration of Trump's Democratic predecessor Barack Obama eased economic sanctions on Iran in exchange for Tehran limiting its nuclear program.

Trump has called it the "worst deal ever negotiated" and he wants Britain, France and Germany — which also signed the pact along with Russia and China — to toughen up the terms.

Under the deal, known as the Joint Comprehensive Plan of Action (JCPOA), the United States committed to ease a series of US sanctions on Iran and it has done so under "waivers" that effectively suspend them.

International Atomic Energy Agency chief Yukiya Amano has said in Iran his agency had the world's most robust nuclear verification regime. If the deal failed it would be "a great loss."

Rouhani suggested on Monday that Iran might remain in the nuclear deal even if Trump abandons it and imposes sanctions. But he also warned that Tehran would fiercely resist US efforts to limit its influence in the Middle East.

The Kremlin said on Tuesday a US withdrawal from the nuclear deal would have harmful consequences.

Israel is widely believed to be the only nuclear-armed state in the Middle East, although it neither confirms nor denies possessing atomic weapons.