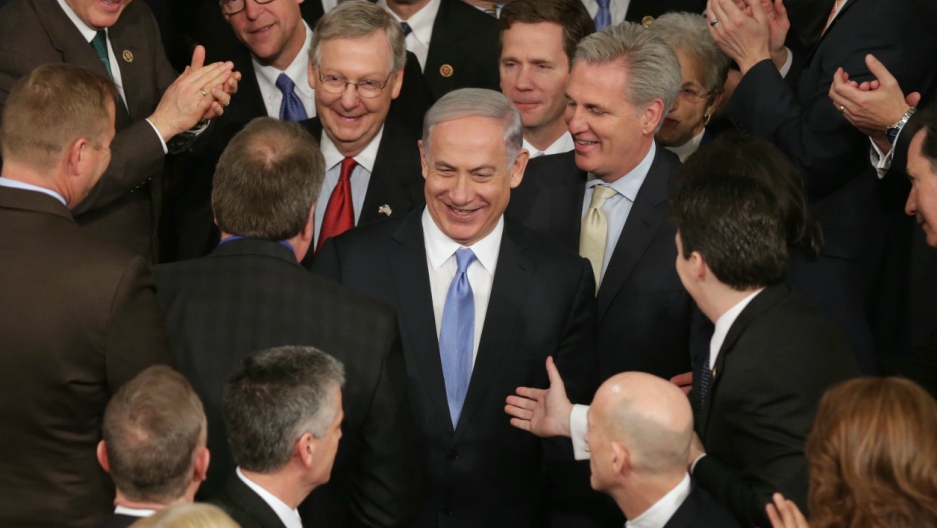 Israeli Prime Minister Benjamin Netanyahu is greeted by lawmakers as he arrives to speak to a joint meeting of the United States Congress at the U.S. Capitol on March 3, 2015 in Washington, DC. At the risk of further straining the relationship between Israel and the Obama Administration, Netanyahu warned members of Congress against what he considers an ill-advised nuclear deal with Iran.
Credit: Chip Somodevilla
Share

OWL’S HEAD, Maine — Even supporters of President Obama have questioned whether he has a cohesive foreign policy strategy or whether he and his White House advisors usually find themselves just winging it as they react to unfolding events.

But compared to his dysfunctional Republican opposition in Congress, which has actively tried to undermine any possible positive development in the Middle East, Obama looks like a Bismarck or a Metternich.

Israel’s Prime Minister Netanyahu addressed Congress at the invitation of John Boehner. During his speech, the Israeli hard-liner openly acknowledged that supporting him is tantamount to eliminating the two-state solution to Israel’s Palestinian problem. Is this what the Republicans were cheering so wildly for?

Is this what Senator Cotton and 46 of his Republican colleagues want?

Iran’s supreme leader, Ayatollah Khamanei, posted a statement on his website that the senator’s letter was “a sign of a decline of political ethics and the destruction of the American establishment from within.’’

That statement was nicely crafted. Cotton could borrow the ayatollah’s letter-writer next go-round.

Our European allies were not impressed by the Republicans’ meddling. German Foreign Minister Frank-Walter Steinmeier, in Washington for a meeting at the Center for Strategic and International Studies, said that over the years of on-and-off negotiations with Iran, the advantage the West had was that ‘’we were credible,’’ that the onus had always been on Iran to prove its credibility. ‘’All of a sudden,” he noted, “Iran is in a position to turn to us and ask, ‘Are you credible?’’’

Our British cousins were only slightly more tactful, with Foreign Secretary Philip Hammond commenting that Republican behavior could “become a spanner in the works.”

It could indeed. Maybe politics has long since ceased to follow that dated ideal of stopping at the water’s edge. But this is serious stuff. Twelve years into the failed Iraq war, started by the last Republican president, why are nearly 90 percent of Republican senators and the entire Republican House backing policies whose end could well be a new Middle East war against a country three times the size of Iraq?

“No deal is better than a bad deal,” is the siren call. But exactly how bad is a deal that puts Iran’s nuclear activities on ice for at least 10 years?

Conservative columnist Michael Gerson, writing in The Washington Post,  rejects that argument. “The alternative to a bad nuclear deal is not war; it is strong sanctions and covert actions until the regime falls or demonstrates behavior change in a variety of areas,” he says. “But this approach depends on the tightening of sanctions in cooperation with Europe, as well as Russia and China.’’

Indeed it does, and it is a non-starter. The Europeans, not to mention Russia and China, have no stomach for tighter sanctions. They would like to get off the sanction train altogether.

And, what is meant by covert actions? Does that mean assassinating a few more Iranian nuclear scientists? Or somehow going after the ayatollah? Do we really want to play by those rules when Iranian influence is at an all-time high in the Middle East disaster zone?

Sure, our Republican senators are frustrated. It’s a frustrating world, and their skills are clearly in winning elections not in fathoming the intricacies of international diplomacy.

It’s a complex and confusing time. American power seems even more constrained than during the heyday of the Soviet Union. NATO expansion was counterproductive. Our Iraq adventure has only brought it ever more into Iran’s orbit. There’s the Syrian civil war, the rise of the Islamic State and the creeping Islamization of the once strongly secular Turkey. Libya is now spiraling into failed state status. And, of course, there is Russia’s takeover of Crimea and its ongoing aggression in eastern Ukraine.

Even Henry Kissinger, that great Machiavellian foreign policy strategist of the 1970s and the midwife at the birth of our rapprochement with China — gave us endless years of peace talks with Hanoi that only served to double US casualties before ending with total victory for North Vietnam.

Did he fare any better foreseeing, much less preventing, the 1973 war between Egypt and Israel? Or, when that war was over, in finding a solution to the Palestinian problem, then in its infancy, that bedevils us 50 years on?

In reality, so much of foreign policy, even for the country at the top of the heap, is reacting. Could any strategic thinker have foreseen the Arab Spring, much less the revolutions that followed it? Or, having foreseen them, prevented them?

But then it is not always reacting. Initiating new policies is what statesmanship is all about. Is the West better off perpetuating a lasting enmity with Iran? The Israelis and the Saudis think so. They are traditional enemies that, ironically, both fear the current isolation of Iran will in decades dissipate. If Iran, a Shiite-dominated country, is able to engage with Europe and the West, that will allow it to become a hegemonic regional rival to both Sunni Saudi Arabia and Jewish Israel.

What Europe and the US see, in the decades ahead, is of course the possibility of greater stability in what is currently the world’s least stable and most volatile region.

Opponents to a deal with Iran are right about one thing: that country is not going to change into a pro-Western, secular democracy overnight. But initiating a process that provides encouragement to the moderate President Hassan Rouhani and to the millions of pro-Western Iranians, and that brings its government into a form of responsible interaction with the rest of the world, is certainly a strategy worth pursuing.