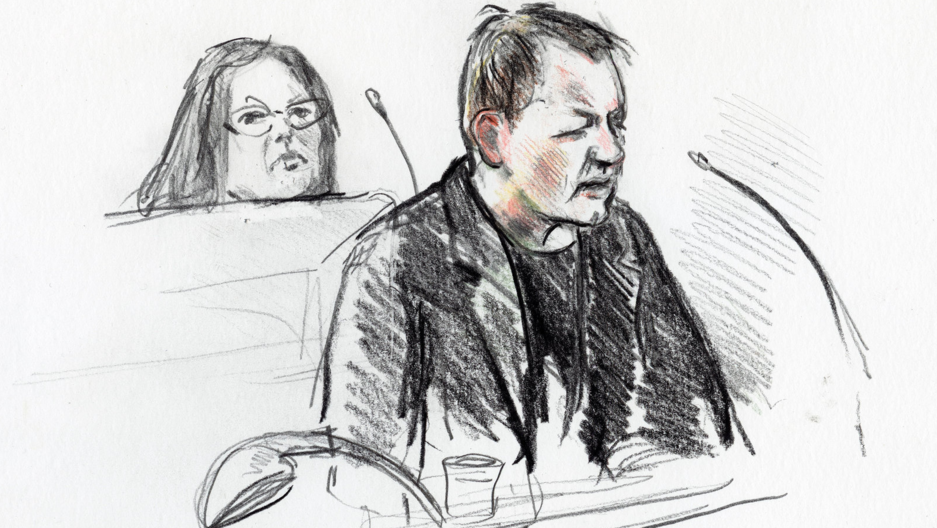 A courtroom sketch shows Peter Madsen during the trial regarding the killing of Swedish journalist Kim Wall, in Copenhagen, Denmark, on April 25, 2018.

Danish inventor Peter Madsen was sentenced to life in prison on Wednesday for murdering, sexually mutilating and dismembering a Swedish female journalist with premeditation aboard his homemade submarine in Copenhagen harbor in 2017.

Madsen, dressed entirely in black, sat motionless as the Copenhagen City Court handed down its verdict in a grisly case straight from the pages of a dark Scandinavian psycho-thriller.

Related: A Danish inventor is suspected in the dismemberment and death of a journalist

Already well known in Denmark for his submarines and his plan to send a human into space in a homemade rocket, Madsen was detained last August when he emerged from his submarine without Wall, a 30-year-old who was researching a piece on him.

Later that month, police identified a torso washed ashore in Copenhagen as Wall's. Her arms, legs and head were found later.

Madsen changed his version of events several times, finally arguing that Wall had been suffocated by an accidental gas leak.

But forensic tests found that she had either been strangled or had her throat cut and that around the time of her death Madsen had stabbed her in her breasts and genitals with a knife or screwdriver.

Judge Anette Burkoe said the panel of judges had been unanimous in finding him guilty of a murder that had been planned.

During the trial, a police prosecutor said images of women being strangled and decapitated, "which we presumed to be real," had been found on Madsen's computer in a laboratory he ran.

Wall was a freelance journalist whose work had appeared in Harper's Magazine, Time, the New York Times, the Atlantic Magazine, the Guardian, Foreign Policy and the South China Morning Post.

She held degrees from New York's Columbia University and the London School of Economics and had written about topics ranging from gender and social justice to pop culture and foreign policy, according to her LinkedIn profile.

Wall had been writing an article for the US magazine Wired on Madsen's race against another Danish group to be the first to send a person into space in a homemade rocket, her boyfriend told the court during the trial.

Wall had split her time between New York and Beijing, and was planning to move to China with her boyfriend less than a week after the fatal trip.

Poignantly, she sent him unsuspecting text messages on the evening she was meeting Madsen, reading: "I'm still alive btw," "But going down now," "I love you!!!" and "He brought coffee and cookies too."

Wall's closest relatives were not present in court; her mother had previously said: "She gave a voice to the weak, the vulnerable and marginalized people. That voice would have been needed for a long, long time. Now, that won't be."

Madsen, 47, admitted to dismembering the body and throwing it off his 17-meter (56-ft) submarine, but denied murder. But the court found that he had dismembered the body to conceal the evidence of the killing.

He was also found to have committed "sexual assault without intercourse" in relation to the 14 interior and exterior stab wounds found on Wall's genitals.

Forensic tests did not support Madsen's claim that Wall had suffocated, and the judge said the explanation was not credible and "not consistent with the subsequent decision to dismember the body."

A life sentence in Denmark is typically around 15 years without parole. The longest-serving convict in modern Danish history is set to begin his 34th year behind bars this year after the murder of two young adults in 1985.

Madsen will appeal against the sentence, his lawyer told the court.

A memorial fund set up in Kim Wall's name by her parents, brother and friends has received donations from over a thousand individuals.