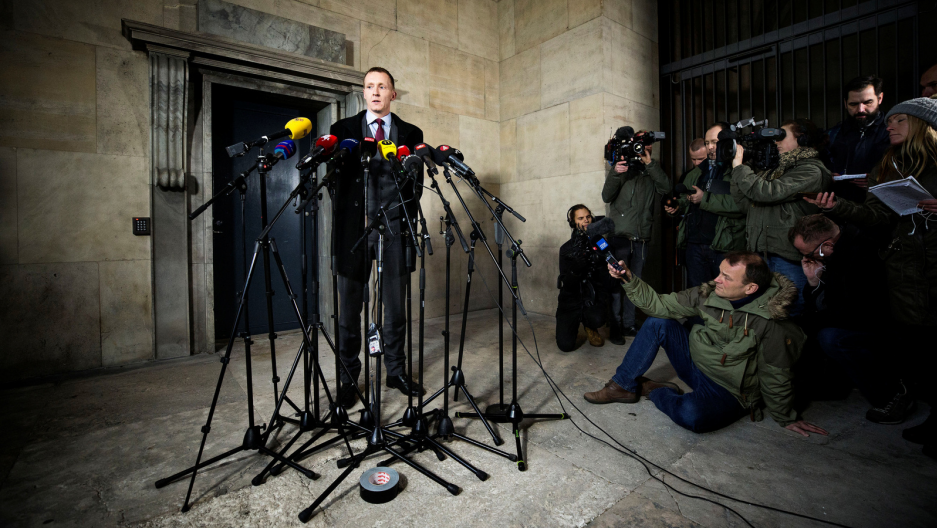 Copenhagen Police's Special prosecutor Jakob Buch-Jepsen is seen during a news conference in front of the Copenhagen Police Headquarters after the prosecutor's office announced the charge in the submarine murder case against Peter Madsen, in Copenhagen, Denmark, Jan. 16, 2018.

Danish prosecutors will seek to have inventor Peter Madsen jailed for life for killing Swedish journalist Kim Wall on his homebuilt submarine in a premeditated murder, possibly by either cutting her throat or strangling her, police said on Tuesday.

Wall, a 30-year-old freelance journalist who was researching a stry on the entrepreneur and aerospace engineer, went missing after Madsen took her out to sea in his 56-foot submarine in August last year.
Related: A Danish inventor is suspected in the dismemberment and death of a journalist
Later that month, police identified a headless female torso washed ashore in Copenhagen as that of Wall, but the cause of death has not yet been established.
Madsen has been charged with the murder and dismembering of Wall along with a charge of sexual assault without intercourse of a particularly dangerous nature, police said Tuesday.
Related: Danish submarine inventor to undergo psychiatric evaluation, could be charged with murder of journalist
Police said in October investigators had found 14 interior and exterior stab wounds to the journalist's genitals.
Madsen has admitted to dismembering Wall on board his submarine and dumping her body parts in the sea, but he denies murdering or sexually assaulting her.
A police statement said that, according to the prosecution's indictment, the murder had taken place "with prior planning and preparation."
"This is a very unusual and extremely brutal case which has had tragic consequences for Kim Wall and her relatives," said Special Prosecutor Jakob Buch-Jepsen, according to the statement.
Related: Journalists like Kim Wall deserve more support
Prosecutors would ask for a life sentence to be passed on Madsen, which in Denmark is typically around 15 years without parole. They also called for him to be held in "safe custody," which can imply indefinite imprisonment.
The prosecutor also sought the confiscation and destruction of Madsen's submarine, one of three the inventor built and one of the largest privately built in the world. It can carry eight people and weighs 36 tons fully equipped.
The prosecutor has asked for Madsen to be held in custody until his trial begins on March 8.
On Oct. 5, police said they found images "which we presume to be real" of women being strangled and decapitated on the hard drive on Madsen's computer in a laboratory he ran.
Julie Astrid Thomsen of Reuters reported from Copenhagen.