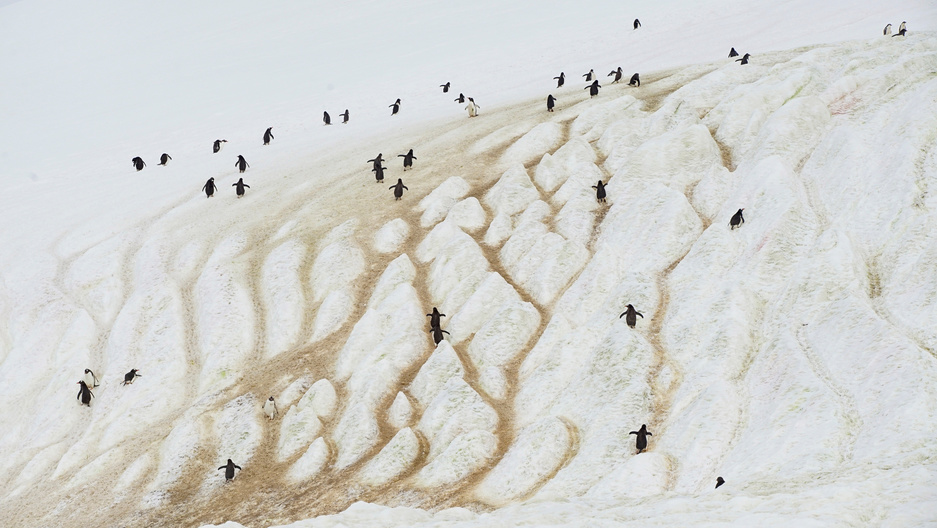 The trip began in Punta Arenas, the capital of Magallanes region, Chile. We had spent three days aboard the Arctic Sunrise, a Greenpeace ship docked in one of the city’s harbors, to test our equipment and conduct security drills. I was eager to get to Antarctica. 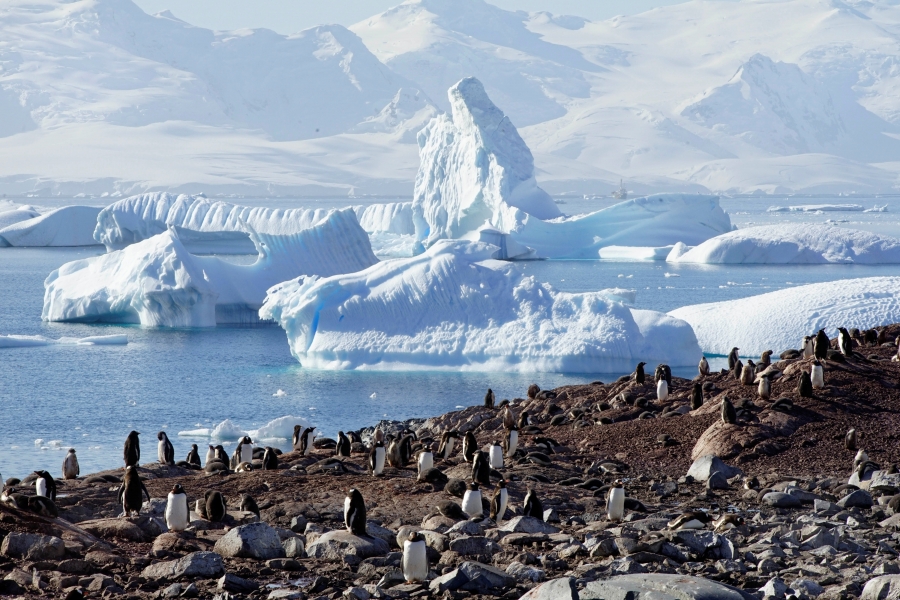 Greenpeace, the global environmental group, organized the journey to raise awareness of, and support for, a European Union proposal to create the biggest protected area on Earth in Antarctica. The plan was to create a safe haven for marine life there from industrial fishing. 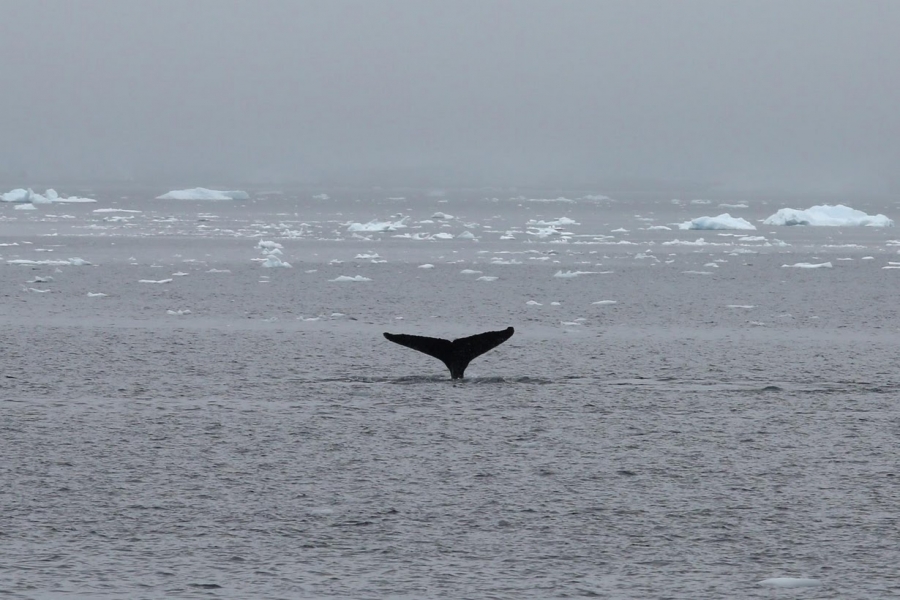 The strategy involved documenting the effects of climate change, pollution and fishing on native wildlife. Pictures and video footage, specimen samples from the Antarctic seafloor, and surface water sampling for microplastics were all collected by Greenpeace to help build the case for the sanctuary.

Related: Thanks to science, we can hear the voices of icebergs. But are we listening?

The proposed Weddell Sea Marine Protected Area (MPA) would cover some 1.8 million sq km (1.1 million square miles) of natural habitat for whales, seals, penguins and many kinds of fish. It will be considered by the Antarctic governance body, the Convention for the Conservation of Antarctic Marine Living Resources, at its October 2018 in Australia.

"Antarctica itself is currently protected under the Antarctic Treaty, but there is a lot of scope for abuse of the waters around Antarctica, and it is already dealing with the issues that are happening elsewhere in the world, such as increasing CO2 levels, acidification of the oceans, and plastics," said Tom Foreman, a Greenpeace expedition leader.

“So, the chance to protect these areas, which are so vital to such a huge number of species in so many ways, it can’t really be missed," he said. 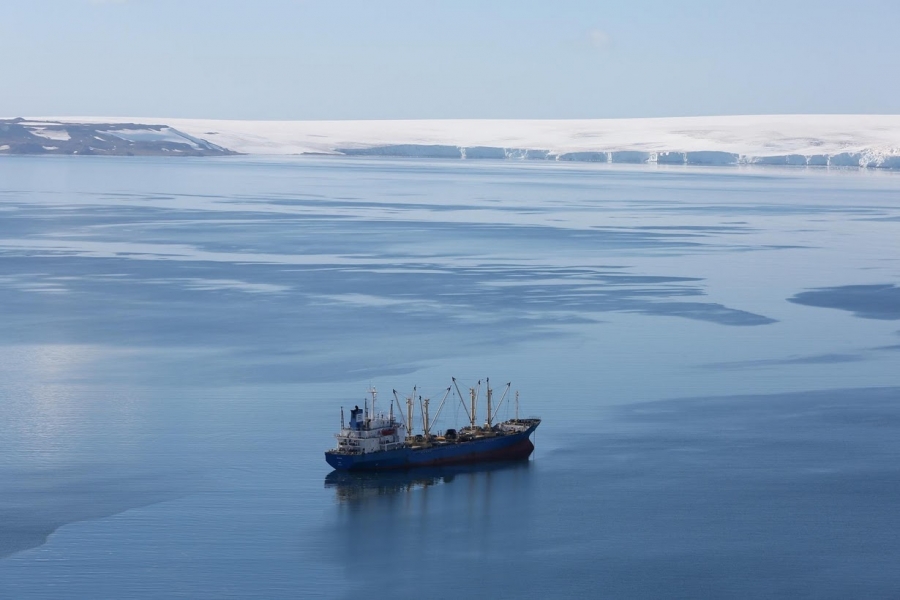 A krill fishing ship with unknown nationality in Half Moon Bay.
Credit:

According to Greenpeace, a key concern is industrial fishing for krill. The group issued a report this month noting that most Antarctic wildlife, including penguins, whales and seals, depend either directly or indirectly on the small shrimp-like creatures for food. Humans use krill in Omega-3 tablets and in pet food.

Related: Climate change research can be risky. But not doing it is even riskier.

"We are asking all krill fishing vessels not to fish in any area in the Antarctic being proposed for protection," said Luke Massey, a spokesman for Greenpeace. 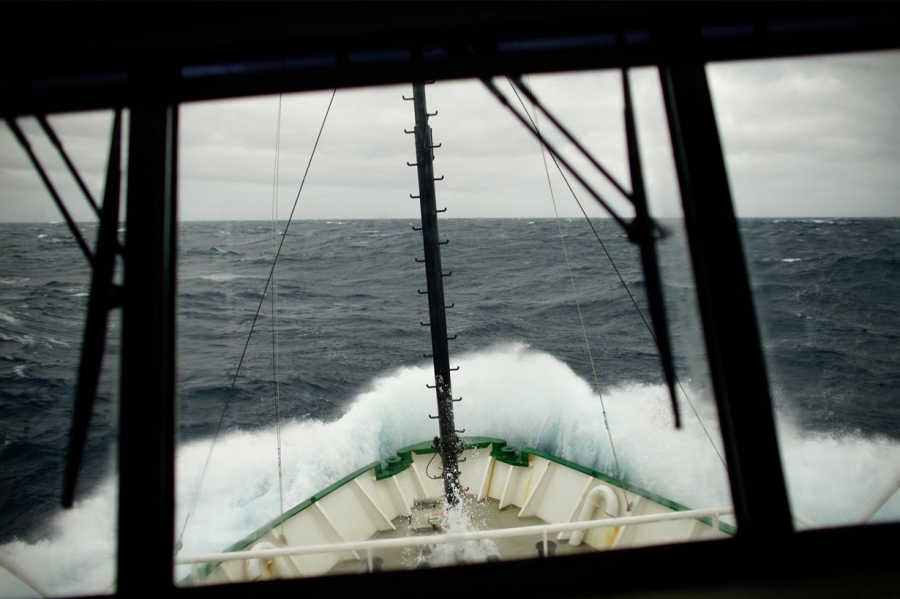 When the ship finally left port, I realized how much I enjoyed the feeling of being at sea. It provides a sense of freedom and promise for the future, the kind you get when you start a new relationship, a new job, or a trip to somewhere that you’ve never been.

Related: A Delaware-sized iceberg has broken off of the Antarctic Peninsula

After rounding Chile’s Tierra del Fuego, escorted by dolphins that reminded me of dogs chasing a car, we reached a spot I had studied in college Geography classes: the fabled Drake Passage, the point where the Atlantic and the Pacific Oceans violently collide off the southern headland of South America. 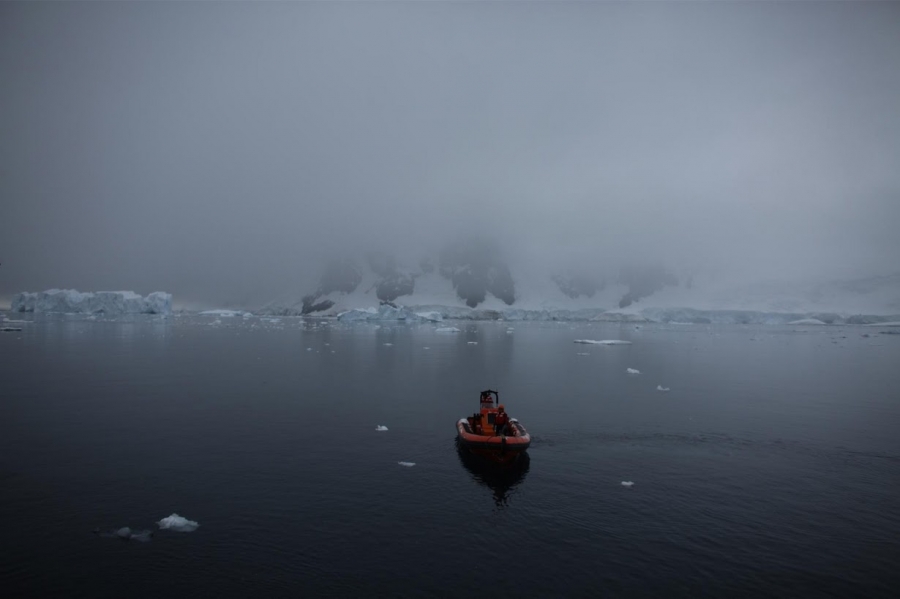 We had been informed the passage could be rough, so we started tying everything down. Pills for seasickness were handed out and the bathroom lights were left on to accommodate those who handled the ride poorly. I decided not to take the pills. That was a mistake.

It felt like being in a centrifuge. After the first few hours of the passage, I went to the bridge to ask the captain how many more hours it would take to get to calmer waters. “It can be up to four days,” he said. He reminded me we were in an icebreaker, a solidly built ship, but not designed for a smooth, swift ride. These were possibly the longest four days of my life.

Related: Antarctica is getting greener. And that's not necessarily a good thing.

When we arrived at the Antarctic Peninsula, the ocean was again calm, and we could spot lots of wildlife. Contrary to what some may think, the Antarctic is full of life. Penguins, seabirds, and different species of seals and whales could be seen at all times.

We went ashore on rubber boats, wearing survival suits weighing nearly 10 kilograms (22 pounds). I packed an extra camera and a couple of long lenses, too, adding even more weight to the already uncomfortable suit. It would be worth it. I could not afford to waste a rare chance at a good Antarctic photo due to a camera malfunction in a distant penguin colony. 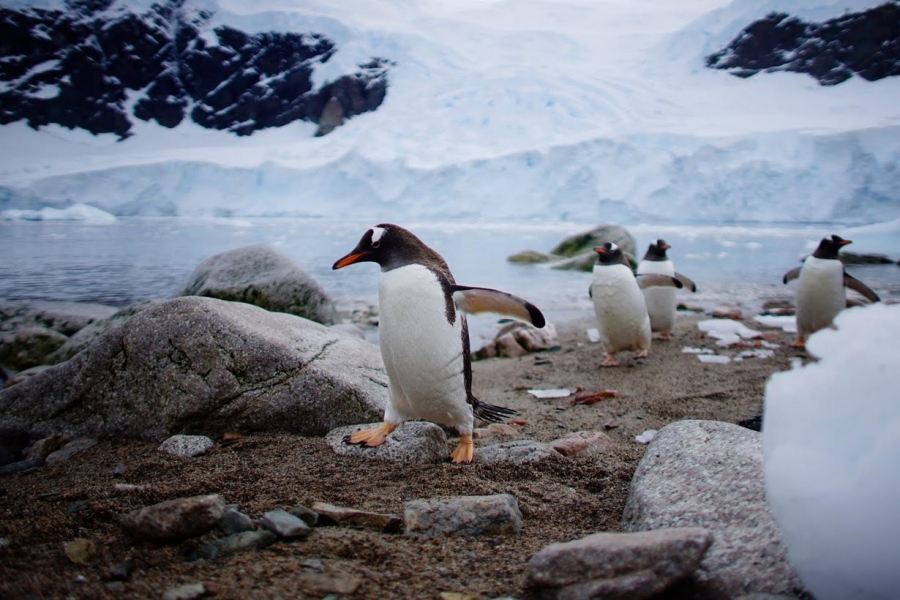 My encounters with the penguins were wonderful and joined my list of unforgettable moments. They do not see humans as predators and can surround you for hours if you do not move much. Along with my dog, I think they are the sweetest things in this world. On these trips ashore, I generally had a couple of hours to shoot pictures. On every one of them I felt like a child in a candy store. 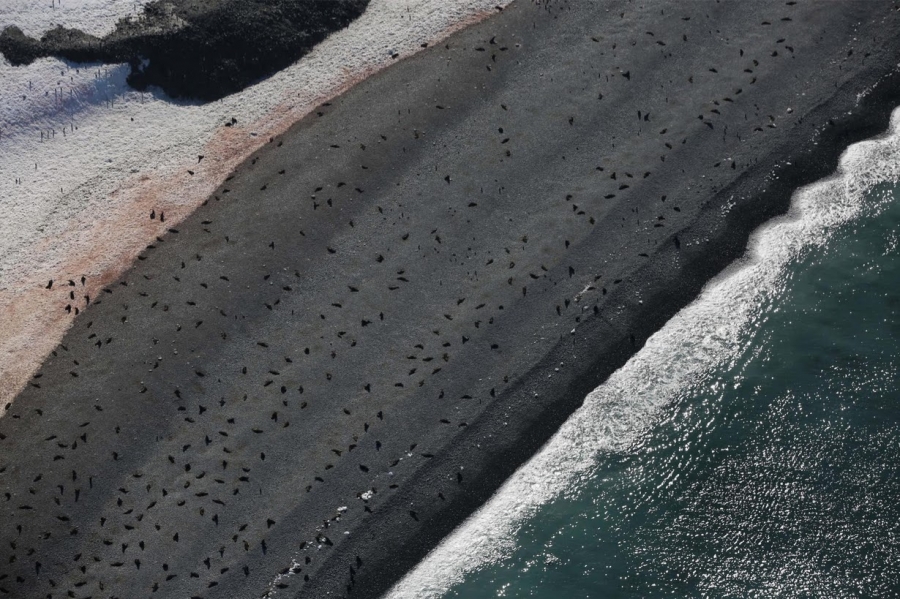 Seals on a beach in Half Moon Bay.
Credit:

I made it onto a helicopter after several days, when the weather became clear enough for safe flight. During three trips over the peninsula, I saw some of the most splendid landscapes I had ever seen. None of my pictures do justice to the experience of seeing these places first hand. 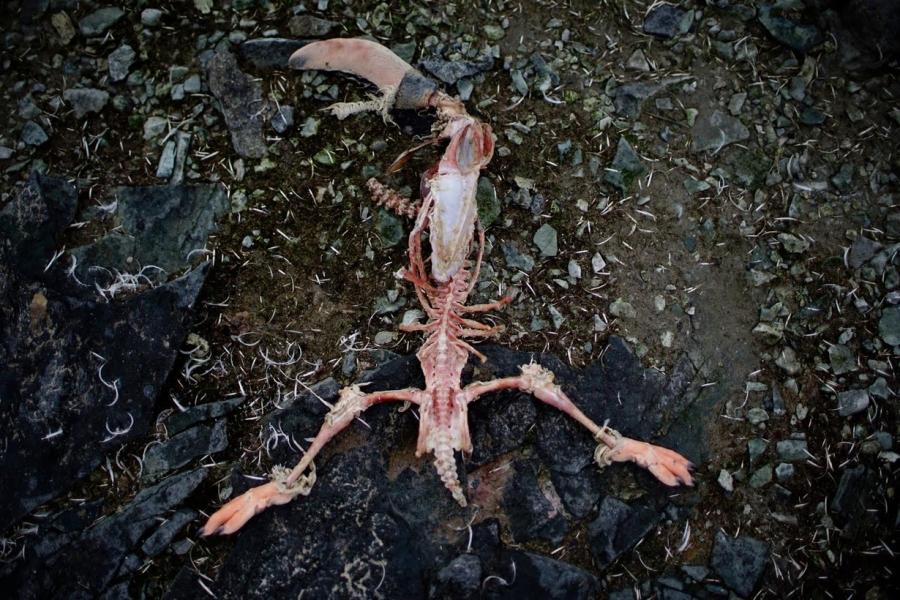 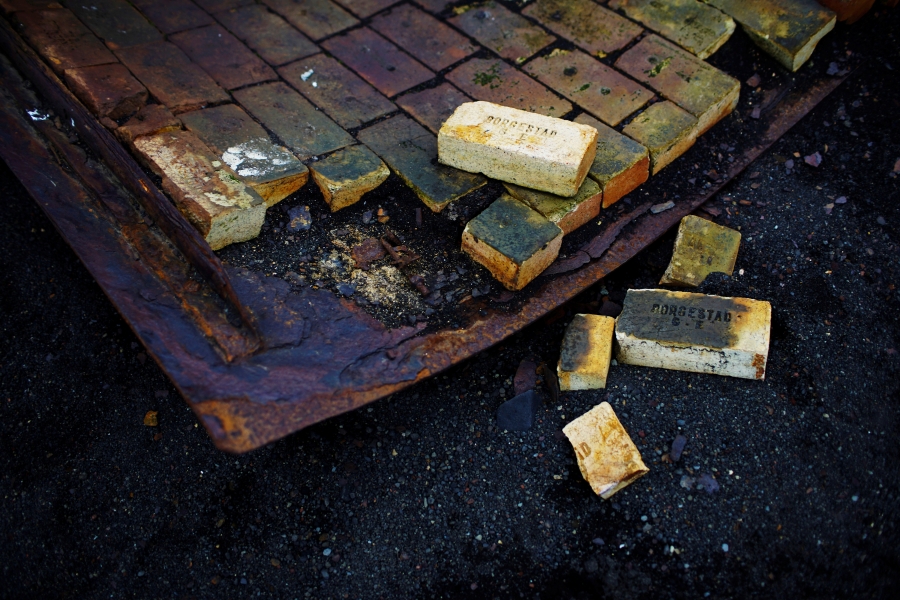 Remnants of an old whaling factory are seen on Deception Island, which is the caldera of an active volcano in Antarctica, Feb. 17, 2018. 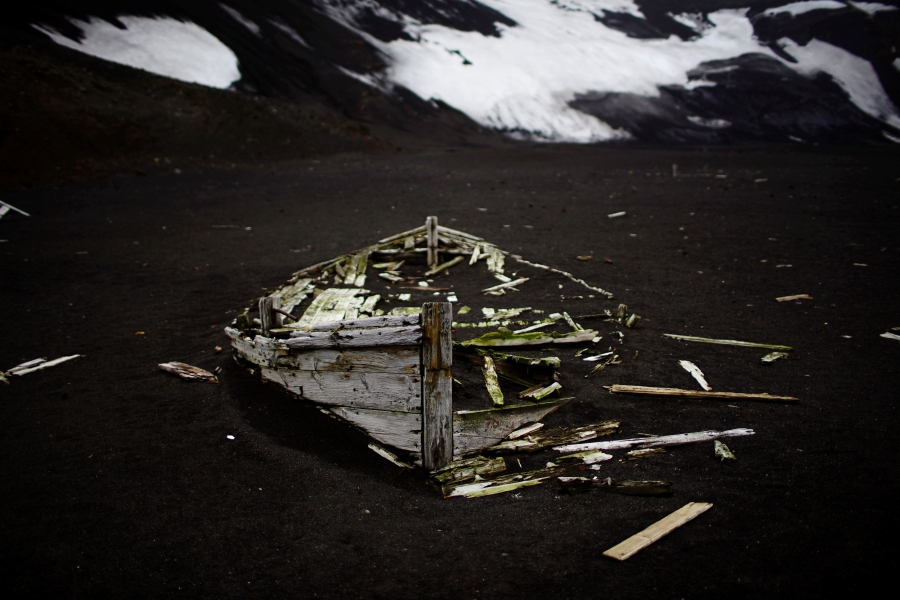 Remains of a boat belonging to an old whaling factory lie on the ground on Deception Island, which is the caldera of an active volcano, in Antarctica, Feb. 17, 2018. 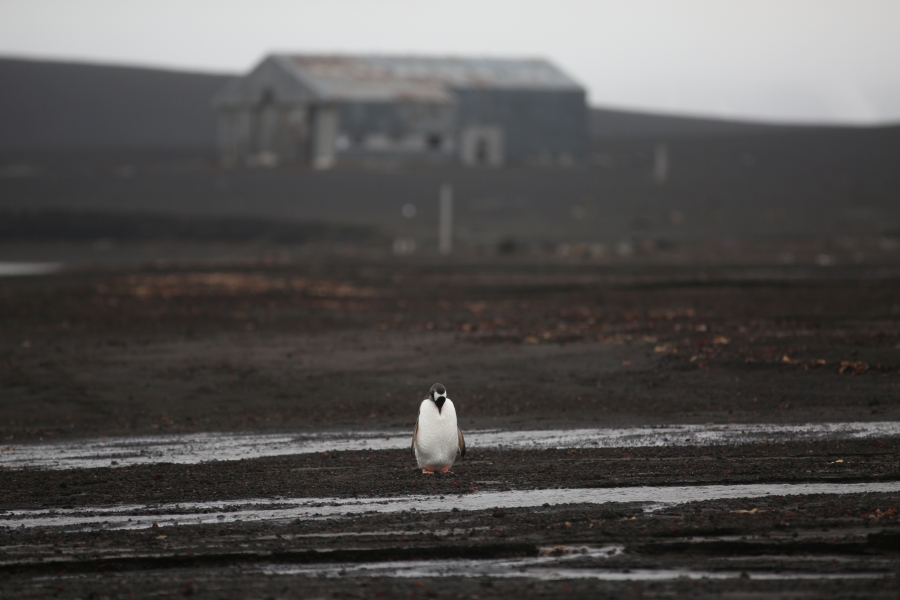 A penguin walks next to an old whaling factory on Deception Island, which is the caldera of an active volcano in Antarctica, Feb. 17, 2018. 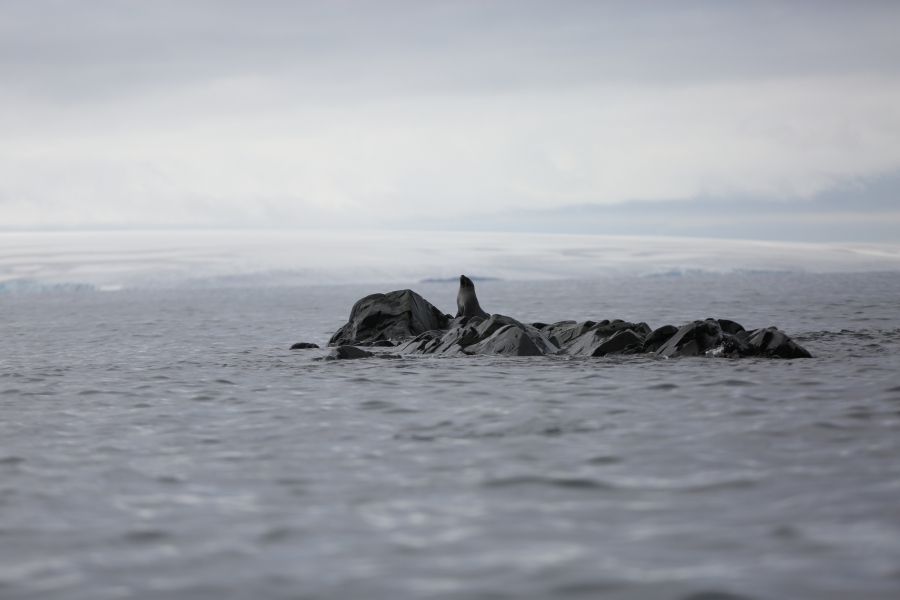 A seal rests over a rock on Maxwell Bay. 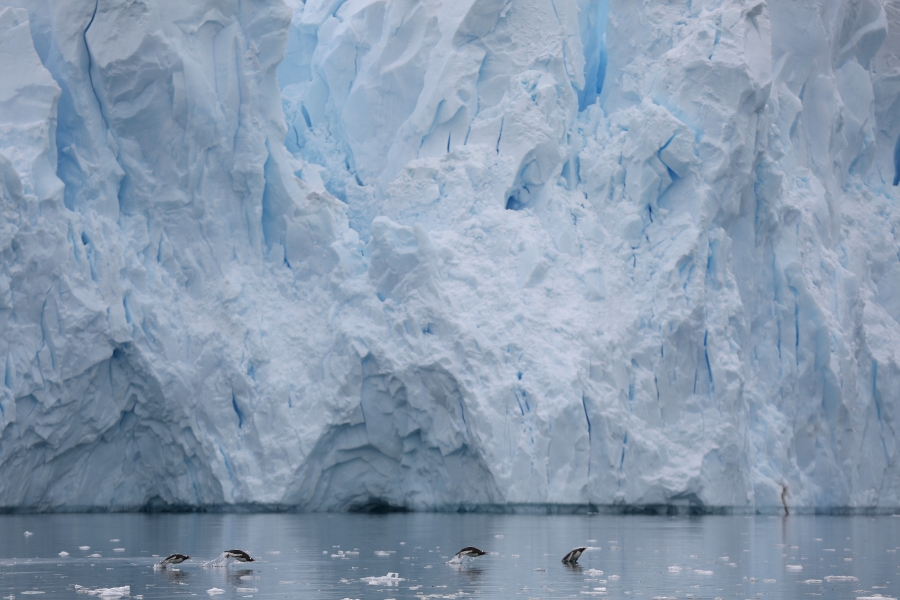 Penguins swim next to a glacier in Neko Harbor. 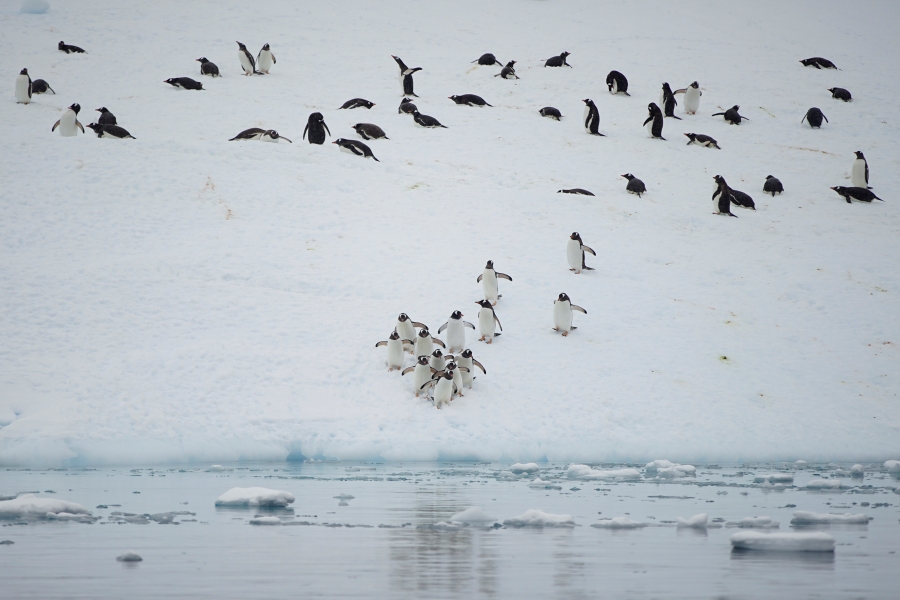 Penguins are seen over an iceberg in Andvord Bay, Antarctica. 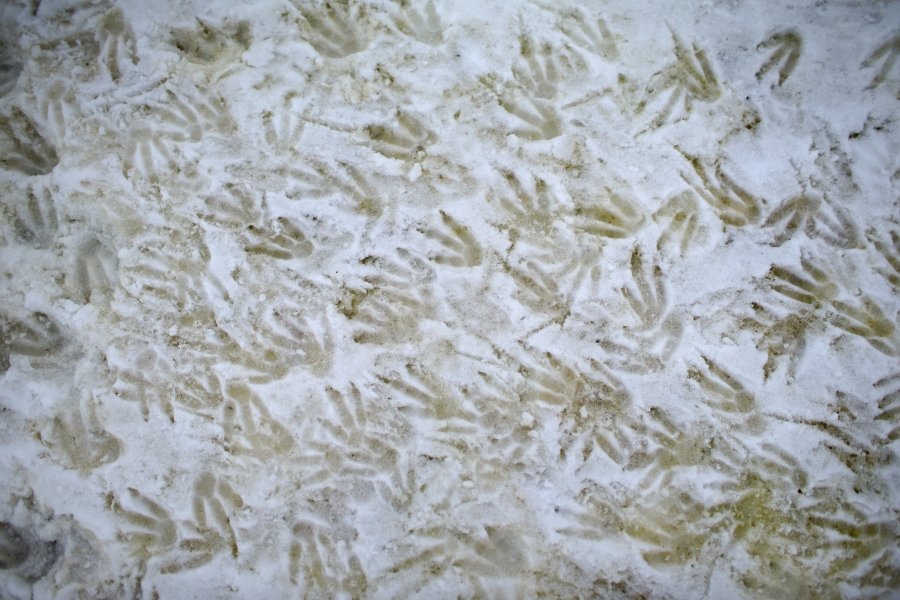 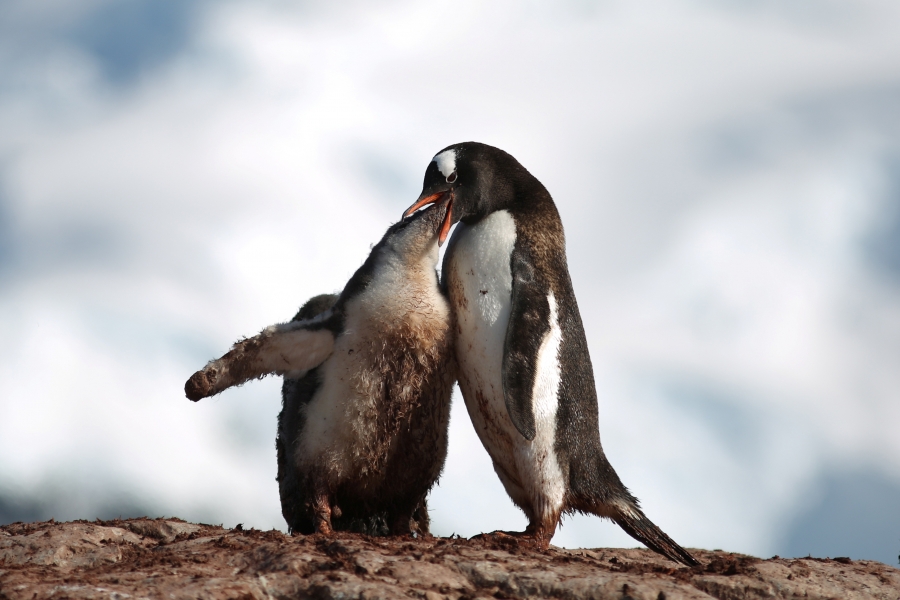 A penguin feeds a young one on Curverville Island, Antarctica. 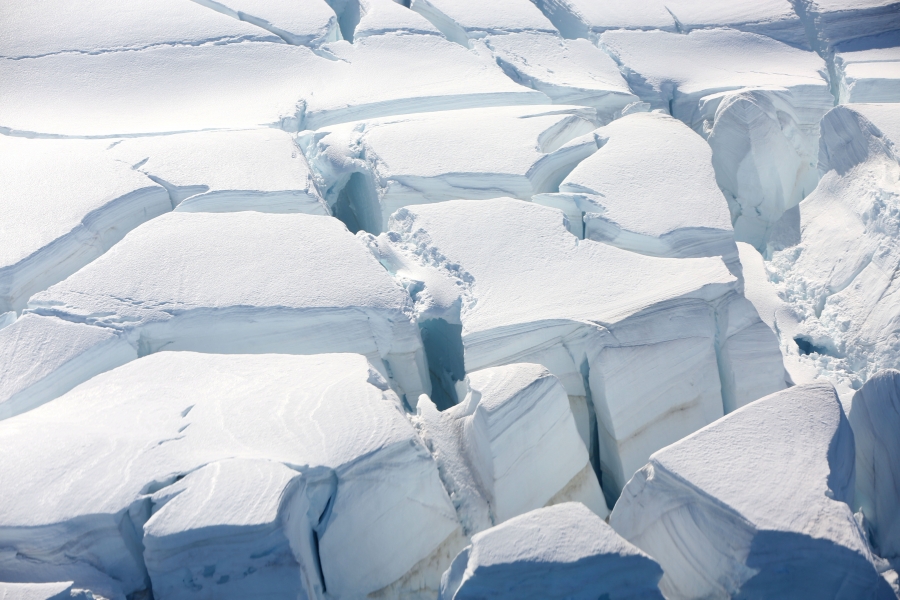 A glacier is seen in Half Moon Bay, Antarctica. 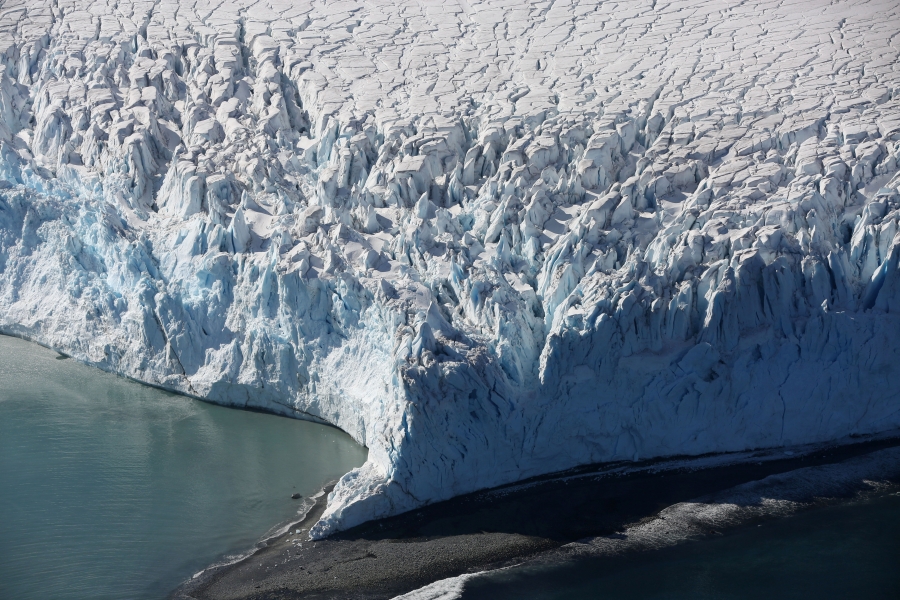 A glacier is seen from overhead in Half Moon Bay, Antarctica. 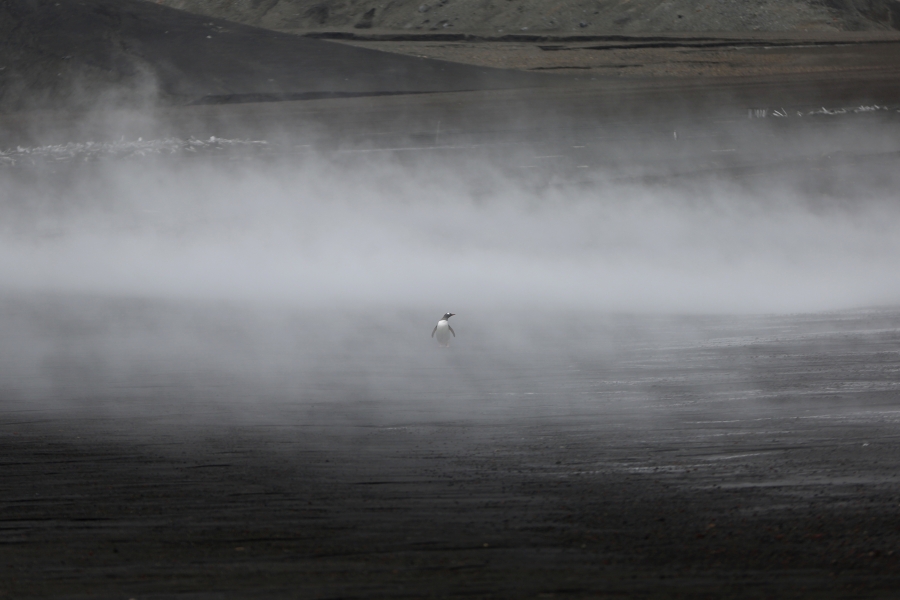 A penguin walks through the geothermal fog on Deception Island, which is the caldera of an active volcano in Antarctica.

Photos and piece by Alexandre Meneghini.