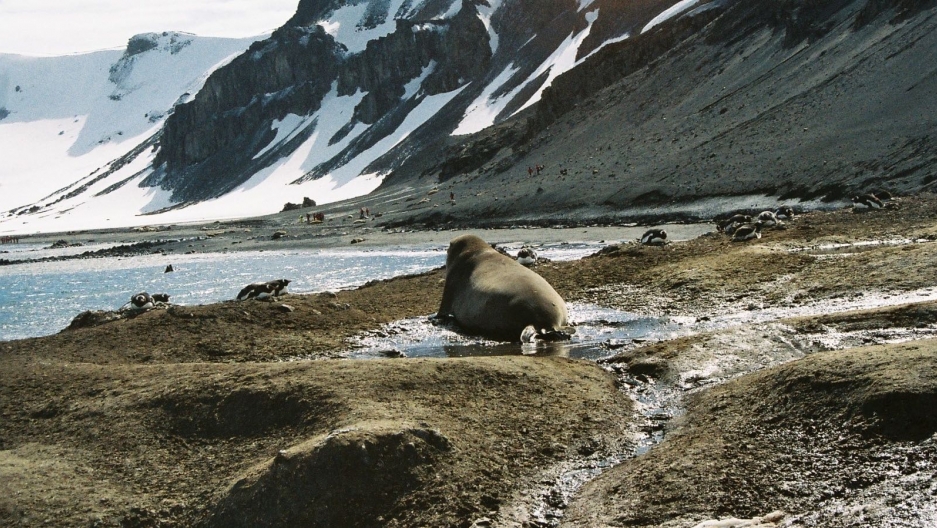 The typical image is that of a pristine, white wilderness of ice and snow. “The white of the snow, the brown of the rocks, and the blue of the sky is a perfect day on the Antarctic Peninsula,” says researcher Dominic Hodgson of the British Antarctic Survey.

But Hodgson says there is increasingly a new color: green.

“We’re typically landed by boats, so we come off of a ship and we land on the shore,” he says. “The shorelines tend to be a fairly narrow strip, backed by high glacial mountains, with glaciers running down off the mountains into the sea.”

“We’re witnessing the retreat of ice, certainly along the Antarctic Peninsula, at a pace that you can see the change from year to year,” explains Hodgson.

In place of the ice, moss is spreading. Moss has long been present in Antarctica, but scientists are struggling to prevent certain types of meadow grass from getting established.

Being a scientist, Hodgson and his colleagues have taken careful measurements of the moss growth, and their findings are published in the journal, Current Biology.

The teams bore holes in the banks of moss that have grown in Antarctica for at least 4,000 years. “But what we’re measuring now with the warming is these moss banks are changing, in the respect that their growth rates are increasing.”

They studied the last 150 years of growth in great detail. “What we found in this study is that the growth rate of the mossbanks that we’ve studied has changed rapidly since around about 1950, and that we’re attributing to the warming trend.”

The growth has accelerated from about one millimeter per year to a maximum of 13 mm per year. That’s a long way from being able to support agriculture, jokes Hodgson.  “Any crop growing at that kind of rate is unlikely to sustain a business,” he says.

But it is fast enough to indicate a threat to the delicate ecosystem of the Antarctic. “It’s warmer and wetter,” he says, “and that enables new species to come into Antarctica, and in particular, there have been meadow grass species, which have become established in different parts of Antarctica that scientists are busily trying to eradicate because it’s an unnatural colonist.”

Houseflies are also poised to become established, posing a major hazard to wildlife as they can be vectors for pathogens.

But even the spread of different kinds of moss can endanger an isolated patch of unique ancient growth.

Much flora and fauna in Antarctica and the surrounding oceans are uniquely adapted to the harsh environment there. And so, they're vulnerable to minor changes in that environment.

Hodgson says, unfortunately, humans are the main source of these invasions. “We all travel around wearing clothes that are often clothes that we’ve worn elsewhere in the world, back at home. But also things like camera bags, which we take on holiday with us but rarely ever clean.” Clothing and equipment like camera bags can carry unseen little seeds and propagules.

It's not just the Antarctic Peninsula that is dealing with these alien invasions. Hodgson says wherever people go on the continent, there are now problems.