Part of Luftwerk's to-scale representation of the Larsen C ice crack on the wall of the building at 2 North Riverside Plaza.

If you walk along the Chicago River behind the Lyric Opera House between now and Oct. 1, you’ll hear a low groan, a twinkling sound — a distinctive hum that is not-quite-urban.

Passersby have compared the noises to an airplane passing overhead, a whale’s vocalization or a penguin singing. This noise, an addition to the echoing urban soundscape, comes from four waterproof speakers affixed to the top of 2 North Riverside Plaza.

At a closer glance, a grey and black vinyl print winds across the building’s face: a 1:9,000-scale replica of the Larsen C crack. This 120-mile long fracture produced one of the largest icebergs in history, when it broke off into the Weddell Sea on July 12. The iceberg, called A68 or the “White Wanderer,” will circulate in the Weddell Sea for tens of years. 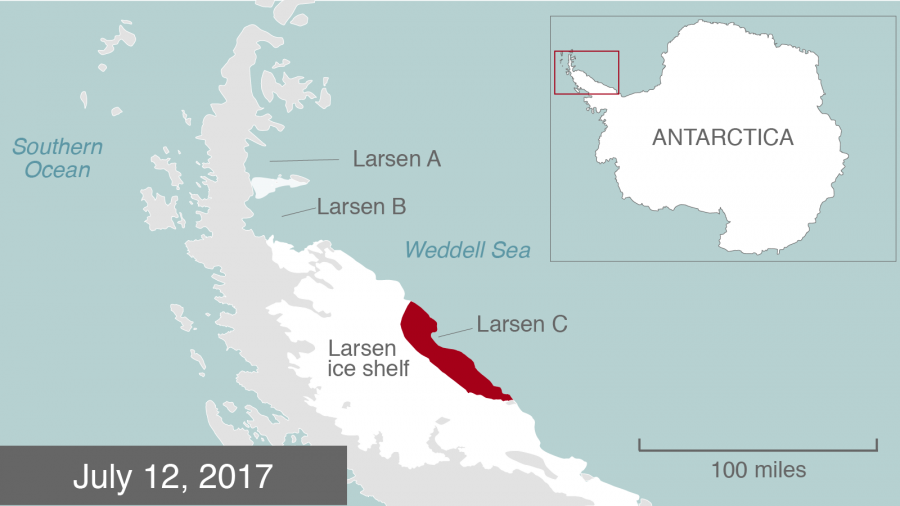 A branch formed on a 120-mile rift resulted in one of the largest icebergs in history.

There’s a challenge in communicating both the scale of Antarctic ice and its connection to climate change, a challenge that two Chicago-based artists Petra Bachmaier and Sean Gallero, who call themselves Luftwerk, and the Natural Resources Defense Council have approached through artistic collaboration.

All sounds in the “White Wanderer” exhibit are composed from a collection of seismic data recorded from 2001-2007 in Antarctica by University of Chicago glaciologist Douglas MacAyeal.

For the last 40 years, MacAyeal has been traveling to Antarctica to study ice — its flow and response to the climate system.

In his fieldwork, MacAyeal places earthquake seismometers on the ice for a year. The seismometers pick up vibrations that are inaudible to the human ear; the waves take many seconds to complete. That data is used to interpret how the Antarctic ice is moving, why it’s moving, what’s holding it back and why it breaks up.

When they discovered MacAyeal’s work online, Luftwerk and the NRDC asked if he would be willing to have his data used — in a sped-up version that is audible to the human ear — as part of a public art installation.

“We started talking a year ago about EXPO, because they [Luftwerk] were really fascinated with sea level rise and hurricanes,” said Elizabeth Corr, Manager of Art Partnerships and Events at NRDC. “We had no idea that by the time our project came to be, we’d be witnessing some of the worst hurricanes that coastal communities had seen in years.”

The idea was to bring Antarctica to Chicago to help people connect, both visually and acoustically, to a place they’re likely never to go.

An information booth where Doug MacAyeal explained his fieldwork and seismometers to passers-by at 2 North Riverside Plaza.

“We felt like bringing the sound here speaks for itself,” Bachmaier said. “It sounds like music, like the ice is crying in a way. It’s haunting music ... it’s massive when you get to feel it."

Luftwerk also addressed the challenge of communicating exactly how large these Antarctic ice sheets are to an urban audience.

“We related it to the scale of a city. Chicago has tall skyscrapers and we tried to match it up,” said Bachmaier. “The tallest skyscraper appears like a little matchbox compared to the scale of this massive natural iceberg.” 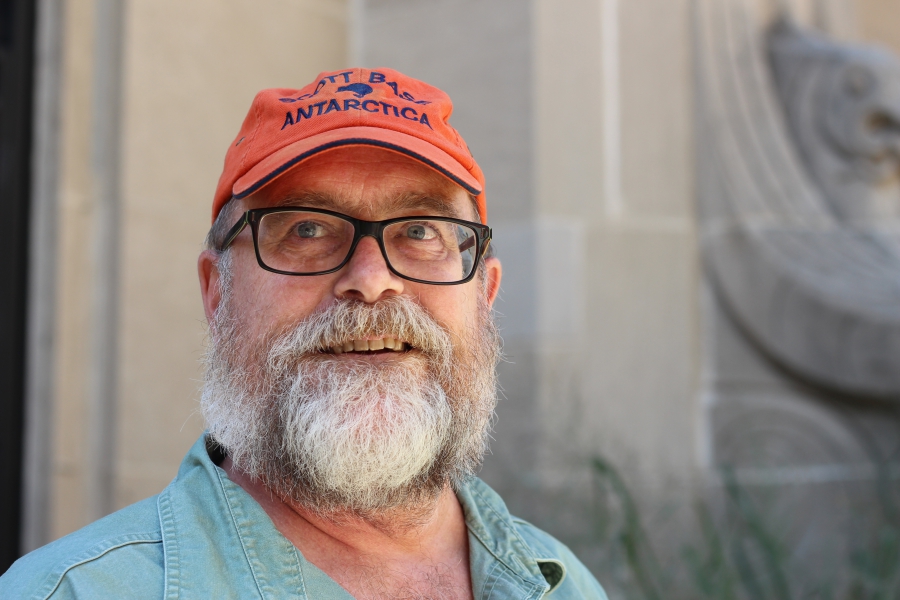 A sign at the exhibit announces: “The Larsen C crack was 120 miles long. That’s about 370 times the size of the Willis Tower.” When MacAyeal was on site to explain his work, he told passersby that if the ice shelf crack started in downtown Chicago, it would extend all the way to Milwaukee, Wisconsin.

“It’s almost like a call and response,” Bachmaier said. “There are moments where the city sounds so similar to the iceberg that there is this kind of movement between the two rhythms. It is almost in sync, but then it’s a very different tonality. We were really surprised when these two sonic worlds collided.”

MacAyeal echoed this sentiment, upon hearing an artistic interpretation of his data from Antarctica being amplified in downtown Chicago.

“There’s an interactive element in the music,” MacAyeal said. “Yes, the Antarctic ice sheet is speaking about its breakup in the form of this sound that’s broadcast across the plaza, but at the same time the city is making its own sound.”

At a time when US President Donald Trump has pulled out of the Paris Climate Agreement and denied the impact of climate change on recent and devastating hurricanes, the artists found it important to bridge the divide between scientific research and public awareness, bringing climate data into people’s everyday lives.

Rather than having a scientist lecturing the public, “White Wanderer” invites passersby to engage with climate science on their own terms.

“The interactive element — the fact that the ice and the city are talking to each other, is sort of at the root of what humans need to learn about climate,” MacAyeal said.