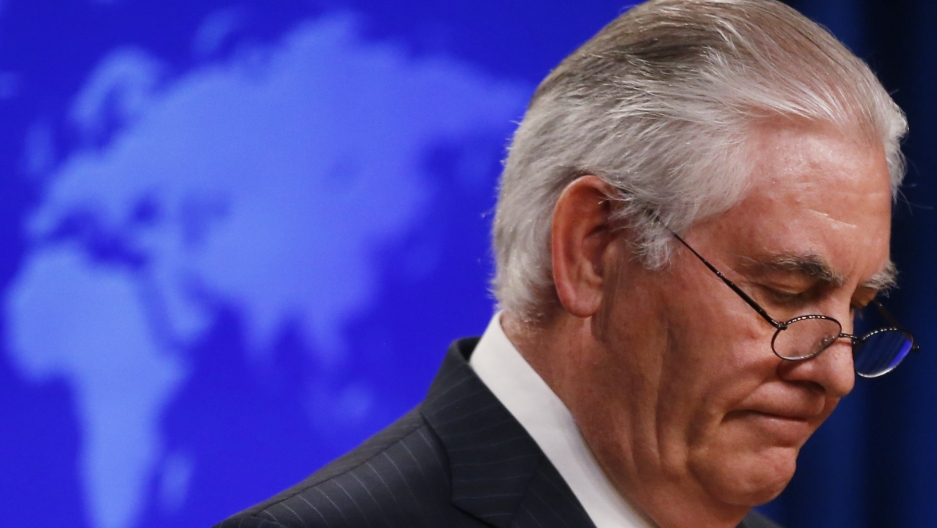 US Secretary of State Rex Tillerson speaks to the media at the US State Department after being fired by President Donald Trump in Washington, US, March 13, 2018.

As Washington adjusts to the unceremonious firing of Secretary of State Rex Tillerson, experts and current and former State Department staffers are cautiously optimistic about his likely successor, CIA Director Mike Pompeo.

Tillerson’s nearly 14-month tenure, marked by public disagreements with President Donald Trump, took a wrecking ball to staff morale as he downsized and reorganized the department while dismissing career diplomats.

Related: So, what does Pompeo have that Tillerson doesn't?

“There is hope Pompeo will restore some normalcy to the department,” said one State Department official serving overseas, who spoke to PRI on condition of anonymity in order to speak freely.

Pompeo’s Senate confirmation hearing is expected to be held in April. After that, he will have to set his priorities and appoint staff to several senior State Department positions Tillerson leaves empty in his wake. The process may be just as drawn out as it was the first go-around with Tillerson, the official said.

“It’s like starting over again,” the official said. “We will be halfway into the new administration before there is any clarity in terms of what the department is actually doing.”

Pompeo, a former businessman and conservative Republican congressman from Kansas, gained political prominence for his tough grilling of Hillary Clinton over her handling of the Benghazi attack. He has a reputation for hawkishness on policy issues such as North Korea, Iran and China. He is perceived as aggressively partisan and a Trump loyalist. And he has no formal diplomatic experience.

At the CIA, Pompeo worked to send more spies into the field and tried to improve the agency’s speed by cutting bureaucratic red tape — which State Department observers view as good signs for his new role.

“I do think Pompeo would be smart — if he’s confirmed later this year — to make job No. 1 a fresh start inside the State Department and to leverage the talent of career diplomats who are already inside,” said David Wade, who served as State Department chief of staff under Secretary of State John Kerry. “Tillerson never had influence with the President, so he was never empowered to do diplomacy. And he seemed to have disdain for the State Department itself, so morale hit rock bottom.”

Relations between Tillerson and Trump were strained almost from the start. Tillerson was often the last to learn of Trump’s foreign policy actions, most recently Trump’s decision to meet with North Korean leader Kim Jong-un.

By contrast, Pompeo and Trump seem to have a genuinely healthy relationship. Several days per week, Pompeo conducts the President’s 10 a.m. intelligence briefing, during which the two have lengthy discussions on everything from Congressional developments to national security.

Many think the State Department will fare better — both internally and externally — under a leader who has the President’s ear.

“Former secretaries of state going back to Henry Kissinger say that a secret of their success … was they had a close relationship with the President, and Mike Pompeo clearly has that,” said former US Ambassador Nick Burns, who served as the State Department’s Undersecretary for political affairs during the Bush administration. “The Secretary of State also needs to be able to disagree with the president and give frank advice and not be afraid to speak truth to power when that's necessary. And I think that will be an early test of a secretary of state.”

It’s unclear whether Pompeo will stand up to Trump — and that worries some current and former officials. Still, Trump’s constant public undermining of Tillerson meant foreign leaders could not take him seriously. The department found itself sidelined on national security issues.

“Tillerson is his own man, and while he was certainly a disaster and diplomats didn’t like him, he was quite sensible and willing to tell Trump when he disagreed with him. Trump didn’t like that,” said Ian Bremmer, president of the Eurasia Group, a New York-based political consultant group. “Pompeo is much more politically savvy and engaged, he’s much more of an enabler, and he’ll never contradict Trump.”

“The potential upside,” Bremmer continued, “is that Pompeo is good at managing both up and down. From an institutional, managerial perspective, this is a good thing. But in terms of foreign policy, [his nomination] is negative and a danger.”

Why Tillerson had to go

Trump’s displeasure with Tillerson — who often disagreed with him publicly and once called him a “moron” preceded by an expletive — was an open secret, as was Trump’s plan to replace him with Pompeo. No one seemed prepared for Trump’s Twitter announcement Tuesday — an event that perfectly encapsulates this administration.

It is unclear whether Tillerson, who had just returned from a final trip to Africa, had any inkling of his firing. In a statement to reporters Tuesday morning, State Department spokesperson Steven Goldstein implied the agency was caught off-guard.

“The Secretary had every intention of staying because of the critical progress made in national security,” Goldstein wrote, adding that Tillerson “did not speak to the President and is unaware of the reason” for his ouster. Shortly afterward, Goldstein was was fired himself for contradicting the White House’s account.

But the reason is simple: Trump wants a Secretary of State with whom he gets along.

In quick remarks on the White House lawn Tuesday, Trump said Pompeo has “tremendous energy, tremendous intellect. We're always on the same wavelength. The relationship has been very good. … I think Mike Pompeo will be a truly great Secretary of State. I have total confidence in him.”

Tillerson, the former CEO of ExxonMobil, was considered a moderate for this administration. But the gap between the Secretary, who is supposed to be the President’s chief foreign policy adviser, and the President himself weakened Tillerson’s credibility at home and abroad. Tillerson wanted to preserve the Iran nuclear deal, while Trump wanted to scrap it. Tillerson wanted the US to stay part of the Paris climate accord, while Trump wanted to leave it. And on the issue of North Korea’s development of nuclear weapons, where Tillerson sought dialogue, Trump took to Twitter to tell Tillerson he was “wasting his time trying to negotiate with Little Rocket Man.”

Tillerson’s undoing appeared to be his statement that a recent, deadly nerve-gas attack in Britain came from Russia. The White House, by contrast, called it an “outrage” but stopped short of blaming the Kremlin.

“At a minimum, when Pompeo goes around the world, people will think they’re hearing the voice of Trump,” said Heather Hurlburt, a former State Department and White House staffer who is now a project director at New America, a think tank. “Whether having what Trump thinks accurately represented and whether that helps US foreign policy — that’s a separate question.”

When it comes to their respective strengths, Pompeo and Tillerson are polar opposites.

Despite Tillerson’s strained relationship with Trump and his own department, his approach to foreign policy was widely viewed as a pragmatic. But at home, he was an aloof manager who didn’t seem to understand his boss, nor did he have much patience for currying Trump’s favor.

Pompeo’s views on issues like North Korea — which will become critical as the US prepares for high-stakes talks with Pyongyang — signal a different approach to foreign policy. He has also criticized the Iran deal and seemed to mislead the public on the intelligence community's findings on Russian meddling in the 2016 election.

But at home, Pompeo could be just what the embattled State Department needs to boost morale. Immediately after Trump’s announcement Tuesday, there were calls for Pompeo to abandon Tillerson’s plan to shrink the department budget by 30 percent.

“So if Secretary Pompeo is going to be effective, he's going to need to convince Donald Trump that diplomacy and diplomats are important,” Burns said.

He’ll also need to get the State Department rank-and-file behind him. Burns added: “They feel forsaken.”

Dozens of positions need to be filled.

“I am hopeful, and I think a lot of people will be, that he will stop the hemorrhaging of talent that has happened under Mr. Tillerson,” said Gina Abercrombie-Winstanley, a career diplomat who served as US ambassador to Malta from 2012 to 2016.

She is among the several senior ambassadors who have left the State Department in recent months.

Still, some don’t see how Pompeo can fix the damage they believe Tillerson inflicted.

“Unfortunately, the State Department is going to go from a T-Rex that was stomping throughout Foggy Bottom, to a person who comes from the James Bond world of international affairs, and that’s a very different tradecraft in the art of diplomacy,” says Brett Bruen, a former State Department official who served as the White House’s director of engagement under Obama and now heads the Global Situation Room, a consulting firm of former government officials.

Bruen worries that Pompeo’s skills and personality — his hawkishness, his reputation as combative, and his intelligence background — will damage US foreign relations.

“That will cost us influence. And we are in a situation where American influence is at a historic low,” Bruen says. “We need ambassadors, we need diplomats to convince suspicious and frightened leaders of the world that America should be trusted. I don’t see Pompeo as the best messenger for delivering those reassurances.”

For now, the State Department can only wait and see.

“Certainly I think everyone in the building wishes him the best, and wishes him good luck to do good for the US and all those who are still trying to carry out foreign policy in our best interest,” Abercrombie-Winstanley said. “So, fingers crossed.”