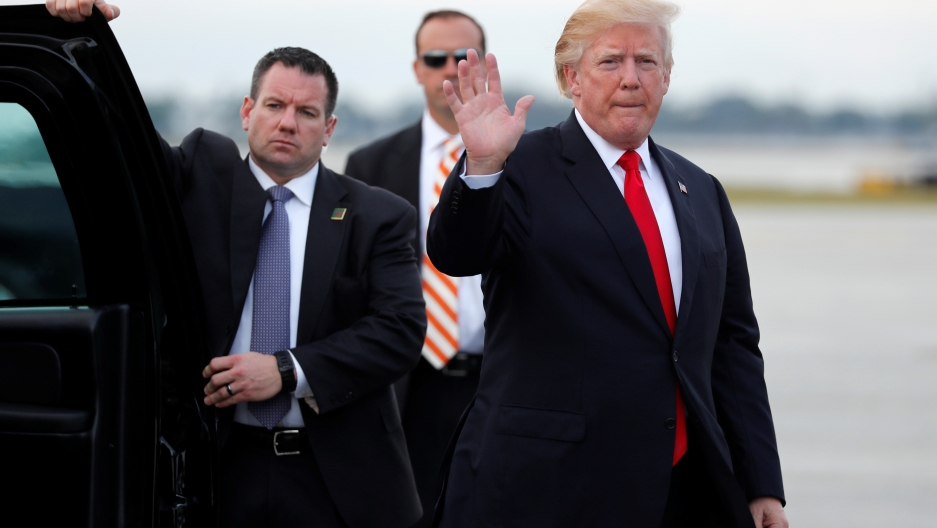 President Donald Trump arrives to board Air Force One to return to Washington at the conclusion on their holiday vacation, from Palm Beach International Airport in West Palm Beach, Florida, Jan. 1, 2018
Credit:

On Tuesday night, President Donald Trump tauntingly tweeted a response to North Korean leader Kim Jong-un's recent speech where Kim warned the US that he has a "nuclear button" on his desk at all times. Trump tweeted that his button is "much bigger" and "more powerful" than Kim's.

North Korean Leader Kim Jong Un just stated that the “Nuclear Button is on his desk at all times.” Will someone from his depleted and food starved regime please inform him that I too have a Nuclear Button, but it is a much bigger & more powerful one than his, and my Button works!

US officials across the country quickly reacted to the incendiary tweet.

"Our President is a child. 'Mine is bigger than yours' may sound tough on the playground, but this is no juvenile affair. Literally millions of lives are at stake," tweeted Colin Kahl, a former national security adviser to Joe Biden.
However, Politico's Susan Glasser told The World "We can't realiably claim to be surprised by it because he's had many examples of inflammatory tweets throughout the course of the first year. But at the same time, it's actually shocking," she says. "This is not how any president ever has conducted public diplomacy."
Glasser recently painted a chilling portrait of White House politics in her piece "Donald Trump's Year of Living Dangerously." It begins with a description of President Trump's meeting with the leaders of four Latin American countries last September.
Susan Glasser: Trump has already threatened the "military option" in Venezuela in August — this same famous press conference where he talked about fire and fury against North Korea. And so people didn't focus on Venezuela but, of course, these Latin American leaders remembered it. Well, Trump opens up this dinner meeting and says, "Rex [Tillerson] tells me that you guys don't want me to use the military option in Venezuela. Is that right? Are you sure?" And they found the interaction to be stunning. I spoke with someone who was briefed by leaders from three of the four countries that attended, who told me the word that they all used after this dinner with the president the United States was that this guy is "insane."

The World: And what were they reacting to? Just a kind of old-time retail politics? Is that what baffled them?

No matter how well prepared they were — and it was eight months into this extraordinary presidency — they found the president's loose talk of the military option in Venezuela shocking, even if they realized that probably President Trump was not going to be going to war in Venezuela. And I think more broadly, the president's combination of what seemed to be lack of deep knowledge about the region combined with making preemptive demands on countries that are neighbors and partners and allies of the United States was something really extraordinary to them.

One of your sources actually said, "It's worse than you think." What did they mean?

Well, you know, I've actually heard that from many people over the course of the last year. And one of my goals in writing this article to really step back and look at the first year of Trump was to capture that reality. The people I've spoken with inside the national security world, inside the foreign policy world, the closer that they have been to interacting with President Trump in some way, the more that you tend to hear accounts of like, "You have no idea what's really going on," or "It's worse than you think." And these are people who are not partisan political actors. It's not about having a particular ideology or agenda. I've spoken with people of all sorts of political persuasions over the last year and almost to a person, they have offered accounts like this.

So in the news today we've got the possibility of talks between North and South Korea in the midst of some real anxiety-provoking stuff. What do you think it tells us that the North is looking to the South just as the US reiterated its mistrust of Kim Jong-un and says it doesn't think this outreach is going to work?

You know, 2017 was really a year of world leaders — including Kim Jong-un — trying to understand Donald Trump, trying to figure out and take the measure of the man. I think in 2018 we're going to see leaders taking action based on their assessments of Trump. And I think that the North's overture to South Korea probably fits into that category — sensing perhaps correctly that Donald Trump is not exactly really invested in America's traditional alliances and partnerships with countries like South Korea and that there is opening to be had for those who are looking to divide the United States for his partners at least partially because of Trump's own rhetoric.

Well, let's continue this example of North Korea, because Secretary of State Tillerson and Secretary of Defense Mattis have been encouraging these talks that may happen between North Korea and South Korea. Why does Trump seem to be ignoring that advice?

Well, as we have seen pretty clearly, Trump takes his own counsel. He gets advice — sometimes he listens to it — but often he disregards it and consistently he has been publicly skeptical of negotiations. He also seems to want to be in the middle of every story. And Trump doesn't like a negotiation to which he's not a party, and he may be being cut out of the North Korea conversation in a way he finds unacceptable.

Look at the Iran nuclear deal. Secretary Tillerson and James Mattis again, they want Trump to stick with it. Trump seems inclined to decertify it. I mean, it's a huge issue and if you're at the level of Tillerson or Mattis you either learn to agree or you resign, laying out your values for the world to see. What does it tell us that neither of these men seem inclined to resign?

Well, again the history of this unique period in American politics will be written not this year. So we don't exactly know what's in there yet. For now, there are many people who believe that Mattis and Tillerson are there because they have made a decision to remain in these positions and to try to shape and curb Donald Trump as long as possible. Is this really a sort of public service mission, suicide mission if you will? Tom Wright, from Brookings [Institute], who's a very smart observer, said to me for this article that he thinks people like Mattis and Tillerson are maybe the first time in history that advisers have gone into an administration to constrain or to stop the president rather than to enable him.

Have you seen "Darkest Hour" yet? It's the story of Winston Churchill on the eve of Great Britain taking on the Third Reich.

No, I haven't, but I heard it's terrific.

What'll strike you is that it's two hours of classic statesmanship. And I was just wondering for a political journalist and writer like yourself, Susan, what is it like to be writing not about a Churchillian-type character but something that looks more like "Alice in Wonderland, Through the Looking Glass" — kind of surreal.

You know, every morning we wake up and there is a sense of, "Pinch yourself can you believe some of the sentences that we're writing?" You know, the parable of the naked emperor sometimes arises when you think about these tweets and this very unpresidential behavior by Donald Trump. And do we become so accustomed to it that we forget at times to point out that there's sort of this big naked guy in the room.

Give us a little advice for the coming year, Susan. The tweets are dramatic, they're made for TV practically and they're distracting. What should we really be paying attention to?

Look, I do believe you have to pay attention to the tweets. This is unfiltered access to the id of the president of the United States. And as he's shown in his policy decisions and willingness to overrule his advisers you better pay attention to what he thinks. Of course it's an erratic and unpredictable guide. But I think anybody who thinks Donald Trump is going to change his ways and become suddenly more presidential in a conventional sense, is crazy.