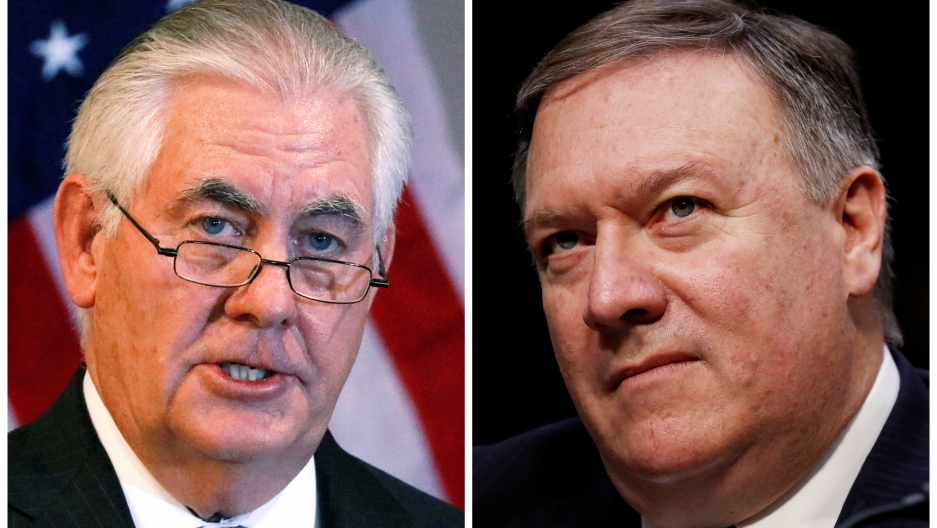 For months, US President Donald Trump contradicted former Secretary of State Rex Tillerson. It happened over the response to the UK announcing that Russia was behind the poisoning of former spies. It happened when Trump said he would meet with North Korean leader Kim Jon Un.

On Tuesday, when Trump fired Tillerson, he specifically cited a "different mindset, a different thinking."

And now, with loyalist CIA Director Mike Pompeo to replace Tillerson, he has in his new secretary someone who agrees with him on major foreign policy issues. Here are some of the big ones.

The Iran nuclear deal was one of the biggest dividing issues between Trump and Tillerson. Much to Trump’s chagrin, Tillerson tried to salvage the deal and was moving ahead with renegotiations with other countries, despite Trump threatening to pull out.

Pompeo, on the other hand, has reportedly called Iran a “thuggish police state," comparing the country to ISIS and putting it on par with national security issues like terrorism. Similar to Trump, his plan is to “roll back” the nuclear agreement between the US and Iran.

Just hours before Tillerson was fired, British Prime Minister Theresa May told Parliament that it is "highly likely" that Moscow was directly responsible for the poisoning of former double agent Sergei Skripal and his daughter. Tillerson responded in support, saying the poisoning “clearly” came from Russia. He went on to say that Russia is "an irresponsible force of instability in the world, acting with open disregard for the sovereignty of other states and the life of their citizens."

Trump said, "As soon as we get the facts straight, if we agree with them, we will condemn Russia or whoever it may be.”

In the past, Pompeo has largely followed Trump’s position on Russia, saying America’s relationship with the country is “complicated” but that Americans are largely “safe” from the country.

When asked about Russian interference with the 2016 elections, Pompeo said with "absolute certainty" that the election results were not skewed by Russian interference. But the Jan. 6 assessment cited by Pompeo, which represented findings by the FBI, the National Security Agency, and the CIA, didn't actually say that. “We did not make an assessment of the impact that Russian activities had on the outcome of the 2016 election,” the report said.

Last week, just hours before Trump announced he would sit down with North Korean leader Kim Jong-un, Tillerson said negotiations would not happen soon. A senior White House official told Politico that Trump “wanted Tillerson out so he could have his new team in place before upcoming talks with North Korea.”

In the past, Pompeo has been in favor of a Trump-Kim negotiation, but under certain circumstances: Kim needs to stop nuclear missile testing, continue to allow the US to “perform military exercises on the peninsula” and needs to leave discussion of denuclearization on the table — all before agreeing to meet with the president and with the assumption that the US will make no concessions before the negotiations.

Following the chemical attacks on Eastern Ghouta, Syria in January, Tillerson said Russia bore responsibility and he called on Moscow to abstain from voting on UN Security Council measures about chemical weapons in Syria.

Pompeo dodged questions surrounding Russia's involvement in Syria, but did criticize the Obama administration for “inviting Russia” into Syria. He also said that any suggestion that Russia had been a US ally in Syria is not based on what's happening in Syria, but that he is hopeful of future US-Russia counterterrorism efforts.

During Tillerson's most recent — and likely final — trip, he expressed worry over Chinese investments in Africa. At a press conference in the Ethiopian capital of Addis Ababa he hinted at concern over China's growing influence on the African continent. "We are not in any way attempting to keep Chinese dollars from Africa," Tillerson said. But, "it is important that African countries carefully consider the terms of those agreements [with China] and not forfeit their sovereignty."

Pompeo appears to be more hawkish on China. "Think about the scale of the two economies," Pompeo said of Russia and China during an interview with the BBC. Pompeo said China is stealing American information and infiltrating the US with spies and cyberattacks. "The Chinese have a much bigger footprint upon which to execute that mission than the Russians do," he said. "We have to do better pushing back against Chinese efforts to covertly influence the world.”

On Tuesday at the State Department, a visibly emotional Tillerson said Trump called him around noon from Air Force One and that he had also spoken with White House Chief of Staff John Kelly.

He said his tenure ends on March 31 but he would delegate his responsibilities to John Sullivan, deputy secretary of state, at the end of Tuesday.

"What is most important is to ensure an orderly and smooth transition during a time that the country continues to face significant policy and national security challenges," Tillerson, whose voice quivered at times, told reporters in a packed briefing room.

Trump spoke to reporters outside the White House following the announcement on Tuesday morning.

"I've worked with Mike Pompeo now for quite some time," Trump said. "Tremendous energy. Tremendous intellect. We're always on the same wavelength. The relationship has been very good, and that's what I need as secretary of state."

Former Undersecretary of State for Political Affairs and US ambassador to NATO under George W. Bush, Nick Burns, has spent months interviewing previous secretaries of state for an upcoming book. He says former secretaries of state, going back to Henry Kissinger, have told him that a reason for their success was that they had a close relationship with the president.

"Mike Pompeo ... clearly has that," he said. "The secretary of state also needs to be able to disagree with the president and give frank advice and not be afraid to speak truth to power when that's necessary. And I think that will be an early test of a Secretary of State Pompeo."

Pompeo will still need to be confirmed by the Senate before he is officially secretary of the State Department.

Reuters and Lydia Emmanouilidou contributed to this report.

Listen above to hear a full interview with Nick Burns.